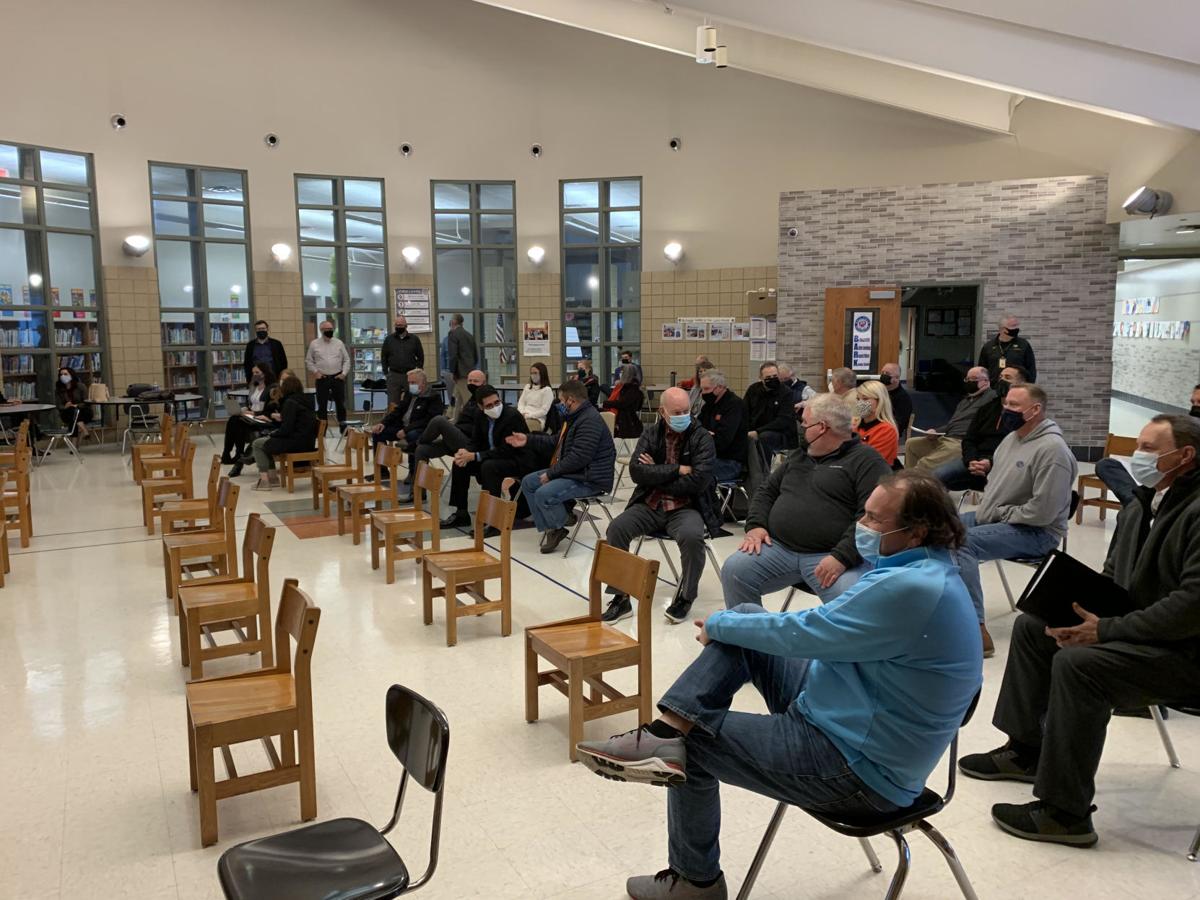 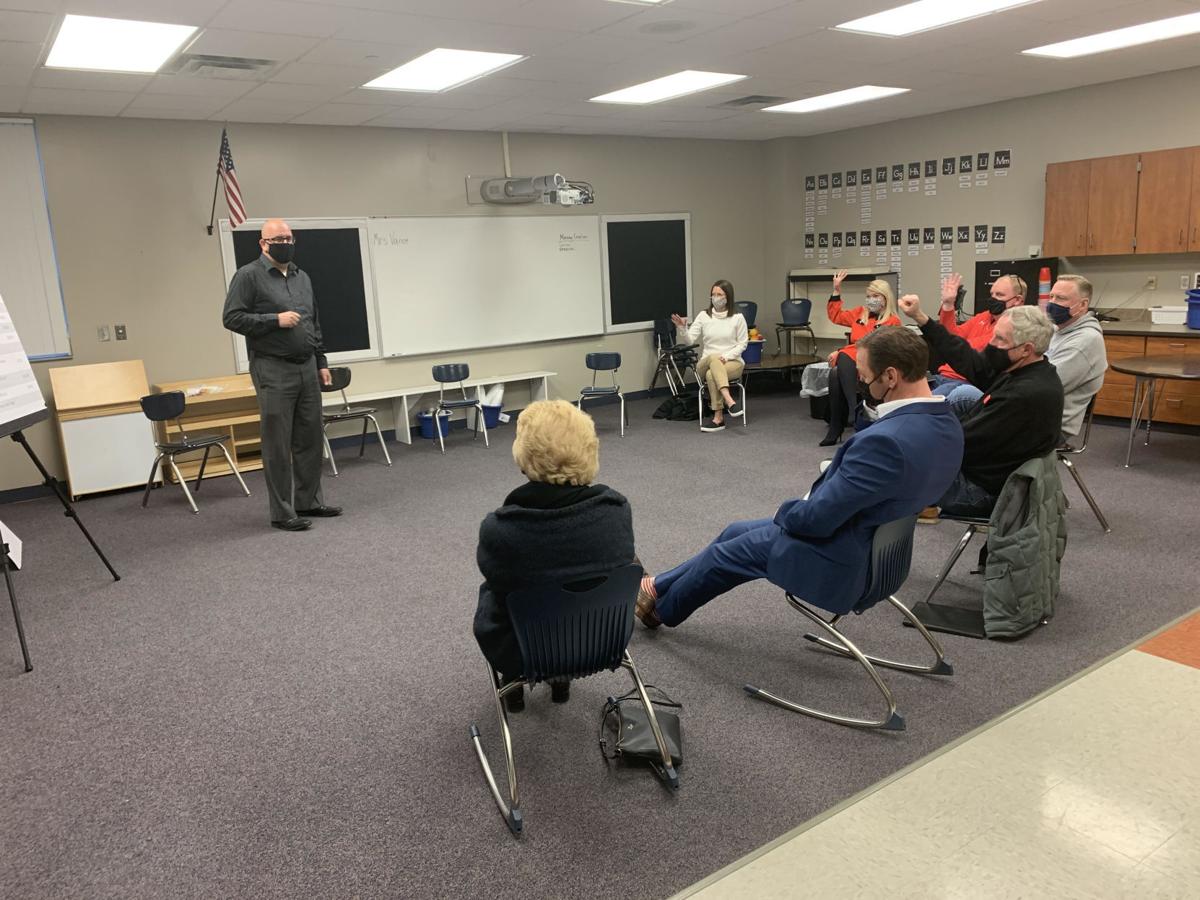 Fremont residents listen in during a breakout session on Monday.

This summer will mark a pivotal moment in Fremont Public School’s efforts to bring a multimillion dollar bond issue to a public vote.

The school district is nearing the end of a series of community meetings meant to garner feedback on the 2021 bond issue. The school had its third meeting on Monday at Fremont High School and plans to host a fourth and final session on May 17.

A time and place for the May 17 committee meeting has not yet been determined.

The tour gave community members the opportunity to see classrooms, common areas and utilities like the school’s HVAC system and boilers firsthand.

“It gave us a common ground and a better and equal understanding of what FHS looks like,” he said.

Dahl said FHS was originally built in 1960 and had four rooms added on to the building in 1968. Three more additions were constructed in the 2000s.

“It’s good for us to all have a common understanding of the high school,” he said.

“Those are the options that we’re looking at depending on how much more time we need to spend working with the citizens committee in terms of the scope amount of the project that we’re going to bring to the voters,” Dahl said.

Before any bond issue can go to the public for a vote, it must first be passed by the FPS Board of Education. Dahl said he is hoping to introduce a resolution regarding the bond issue to the board as early as June or as late as August.

Dahl added that FPS must notify the Dodge County Election Commission 50 days prior to the special election.

“The timing of the education meeting and then notifying the county has to be done sequentially,” he said. “So we can have a board meeting, the board can say: ‘Yes, we want to go forward with it.’ Then we have to notify the county.”

The contents of the bond issue have been at the center of the past three committee meetings. Several potential projects remain on the table, including:

The cost of the project could run anywhere between $100 million to $150 million, according to Dahl. The bond issue can still be completed without increasing the tax levy or passing on additional taxes to the Fremont community, Dahl said.

“I think it’s really important to listen and make changes based on what the citizen’s committee is seeing, recommending and telling the school district because they represent the overall community,” Dahl said. “That’s what has led us to this kind of process and make sure that we’re very, very considerate of what’s being discussed in the citizen’s committee meetings.”

Dahl said the district was “very happy” with the continued community engagement during the course of the three meetings.

With the district preparing to bring a major proposal to the public for a vote, Dahl said it was imperative to garner robust public feedback.

“Obviously we’re looking at a major proposal that we want to bring to the citizens and they helped us understand what we want as a school district,” he said. “More importantly, the school district plays an important role in attracting and retaining a skilled workforce.”

Jose Ortiz wants you to know about his hometown.

Three Rivers Public Health Department’s COVID-19 risk dial for the jurisdiction remained the same this week, while risk dials in Washington an…

Calendar of events for May 7-9

Find out details about a free clothing giveaway, live music at Fremont Eagles Club and more.

Merry Widows to meet May 13 in Fremont

Fremont Friendship Center menu for May 10-14

Find out what's on the schedule this week at Fremont Friendship Center.

With National Healthcare Week taking place next week, Methodist Fremont Health is making sure to give back to its workers.

The Fremont High School Drama Department is looking to bring smiles to families this weekend as it debuts its spring play.

Homestead National Historical Park in Beatrice has announced the artists chosen for the 2021 Artist-in-Residence program.

After a year hiatus due to the pandemic, the North Bend Area Community Band members will be getting together and practicing for some summer concerts.

Branden Mills’ journey to graduation is one filled with firsts.

Fremont residents listen in during a breakout session on Monday.