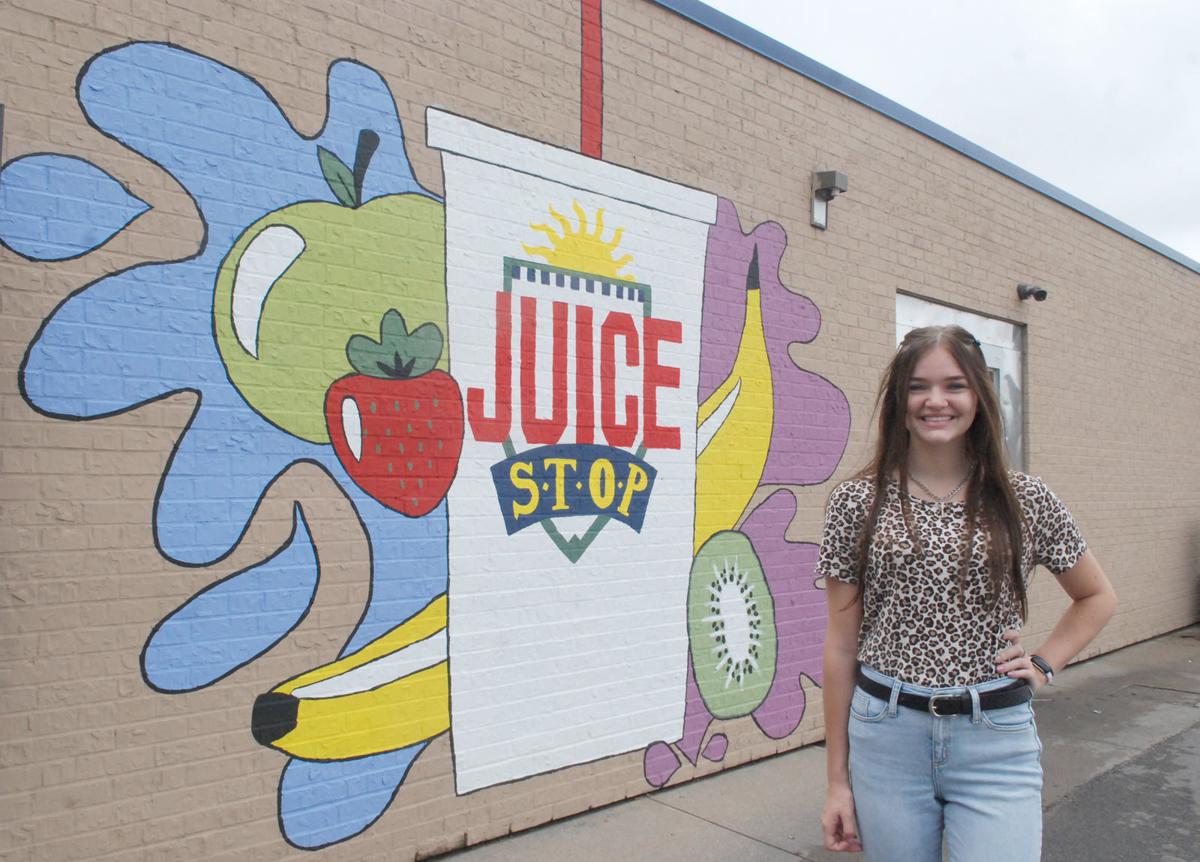 Lauren Glowacki of Fremont stands in front of the mural she painted on the north side of the Juice Stop on Bell Street. Glowack plans to participate in Omaha Fashion Week during which 10 of the outfits she designed and sewed will be modeled. The week promoted as the nation’s fourth largest fashion event. 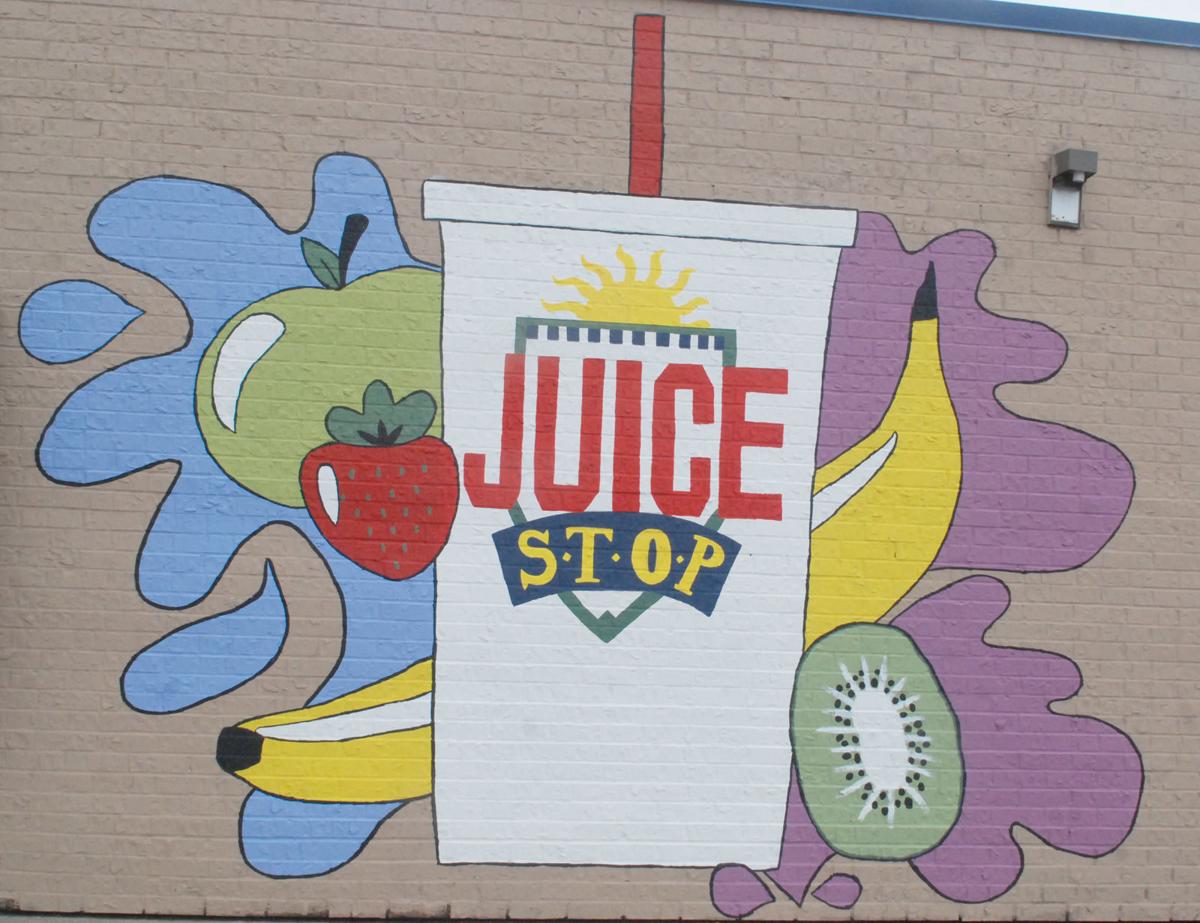 This colorful mural can be seen on the north side of the Juice Stop at 1542 N. Bell St., in Fremont. Lauren Glowacki, a 2019 Fremont High School graduate, painted the mural.

Lauren Glowacki of Fremont stands in front of the mural she painted on the north side of the Juice Stop on Bell Street. Glowack plans to participate in Omaha Fashion Week during which 10 of the outfits she designed and sewed will be modeled. The week promoted as the nation’s fourth largest fashion event.

This colorful mural can be seen on the north side of the Juice Stop at 1542 N. Bell St., in Fremont. Lauren Glowacki, a 2019 Fremont High School graduate, painted the mural.

Lauren Glowacki always wanted to paint on a grand scale.

She got that chance when she painted a colorful mural on the north side of the Juice Stop in Fremont.

Now, her dreams are taking her on to a new endeavor.

On Aug. 20, a collection of 10 outfits she designed and sewed will be modeled on a runway during Omaha Fashion Week. Admission costs vary for an occasion promoted as the nation’s fourth largest fashion event. The event will take place at the Omaha Design Center, 1502 Cuming St.

Scott and Christina Meyer own the Fremont location of Juice Stop, which offers a wide variety of fruit smoothies.

Meyer also knew how a mural could benefit the business.

“We kept hearing that people still didn’t know that we were in town,” Meyer said of the business, situated just behind Dr. Charles Halverson’s office, which is at 1540 N. Bell St.

Glowacki drew her idea on paper and she and Meyer decided on the final design.

“We went on vacation and she started painting. We came back and she had quite a bit done and it looked beautiful. We were so surprised and we love it,” Meyer said.

The mural features a large Juice Stop cup with a red straw.

Nearby are pictures of a banana, kiwi, strawberry and apple. A large blue splash appears on one side with a purple one on the other.

The mural is situated between the drive-thru window and the menu board.

“We’ve been hearing such positive things from our customers (about the mural),” Meyer said.

Glowacki said she’s been asked about painting a mural on the building’s south side.

“I thought about it, but I don’t know if I have enough time before I head off to college,” she said.

In the meantime, she looks forward to seeing her clothing collection on the fashion runway.

The daughter of Mary and Dr. Paul Glowacki has had an early interest in fashion week events.

“I used to go to the shows with my mom and it was always super fun,” she said. “My mom always told me that I should apply.”

At the time, she wanted to come up with cool Halloween costumes for herself and her friend, Shelby Limbach.

But Glowacki didn’t want to spend a lot of money for something they’d only wear once.

So she bought some fabric and — with a borrowed sewing machine — sewed boxer costumes, complete with jackets and shiny pants, from an idea she’d seen on Pinterest.

Glowacki returned the sewing machine, wishing she had one of her own.

She got one as a Christmas gift.

“I started from there, watching YouTube videos and tutorials on how to sew and I’d buy little bits of fabric and see what I could make out of them,” Glowacki said.

To participate in Omaha Fashion Week, Glowacki built a social media profile with pictures of her work. She told what she planned to make for her collection. She answered questions about her target audience and why she chose to make her particular creations. She sent an email with the information — and waited for about a month.

She would be called to an interview with five industry professionals. She took sketches of her designs, fabric samples and pieces she’d already created so they could see the construction of her garments.

They asked about the theme of her collection and what it represented.

Months later, Glowacki notes that she was surprised she was selected to participate in the event.

“I didn’t think I would get chosen at all,” she said.

The Aug. 20 event starts at 8 p.m., but people come at about 6 p.m. to browse and buy retail merchandise. Glowacki believes the show lasts about 1 ½ hours, adding that it includes an intermission.

During the show, a master of ceremonies introduces each designer. A video of that person’s collection with the designer’s commentary is projected onto large viewing screens.

Models and their hair and makeup teams are provided.

Glowacki said she had to have all of her collection made by Aug. 4.

“I was definitely sewing all summer,” she said.

Glowacki said a panel of judges will score her work and prizes will be awarded.

“I feel like there are a lot of opportunities out there for fashion,” she said.

At college, Glowacki said she’ll learn more about clothing construction. She also wants to learn how to market the clothes and plans to earn a minor in business.

Her dreams are even bigger than her mural.

“I would love to design clothes for people, but I would also love working for a big company for starters so I can learn about the industry and how to market and what attracts customers. The dream would be to be a designer for sure,” she said.

Her goal is to show people they can be confident in whatever they want to wear.

“My line is definitely focused on female empowerment, because I feel like women are very strong and they should show it; they should be confident in themselves,” she said. “A lot of my friends always say, ‘Oh I love that, but I could never wear it’ and for some reason that kind of bothers me. I feel like — if you love it then you should wear it, no matter what.

“Everyone has their personal style.”

“I would say I’m a little bit of everything,” she said. “I’ll go from a really feminine, girly dress to pants with a rip or a chain on it or a casual sweatshirt. I think I tap into all of the categories.”

Glowacki enjoys her job at the Juice Stop, where she said she’s learned time management, teamwork and how to work with the public.

“I love working there,” she said. “I like talking to people and no one’s mad when they get a smoothie and I love the smoothies, too, and my bosses are very cool.”

Earl Underwood has been researching his family’s history for 55 years.

Who's your TV dad?