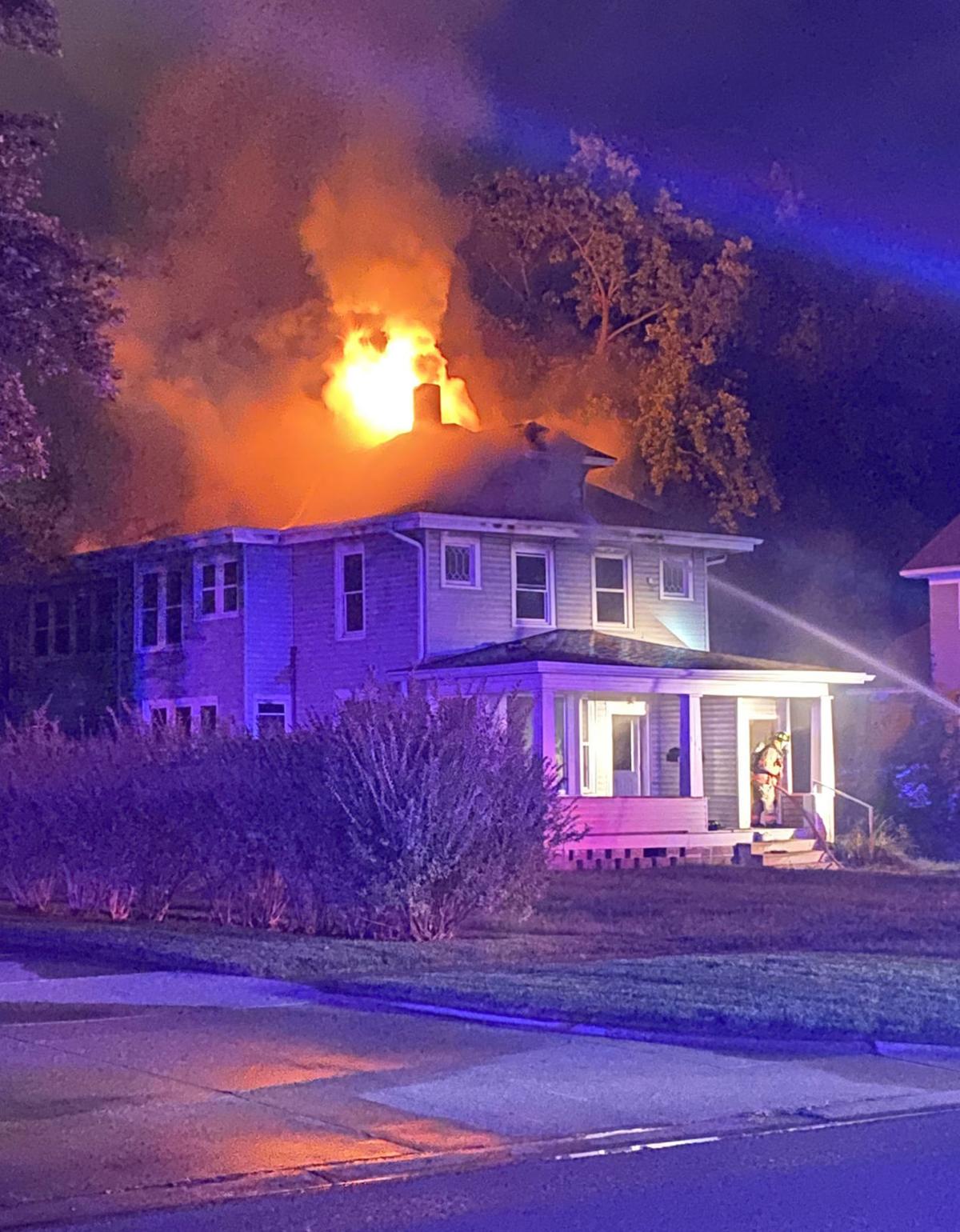 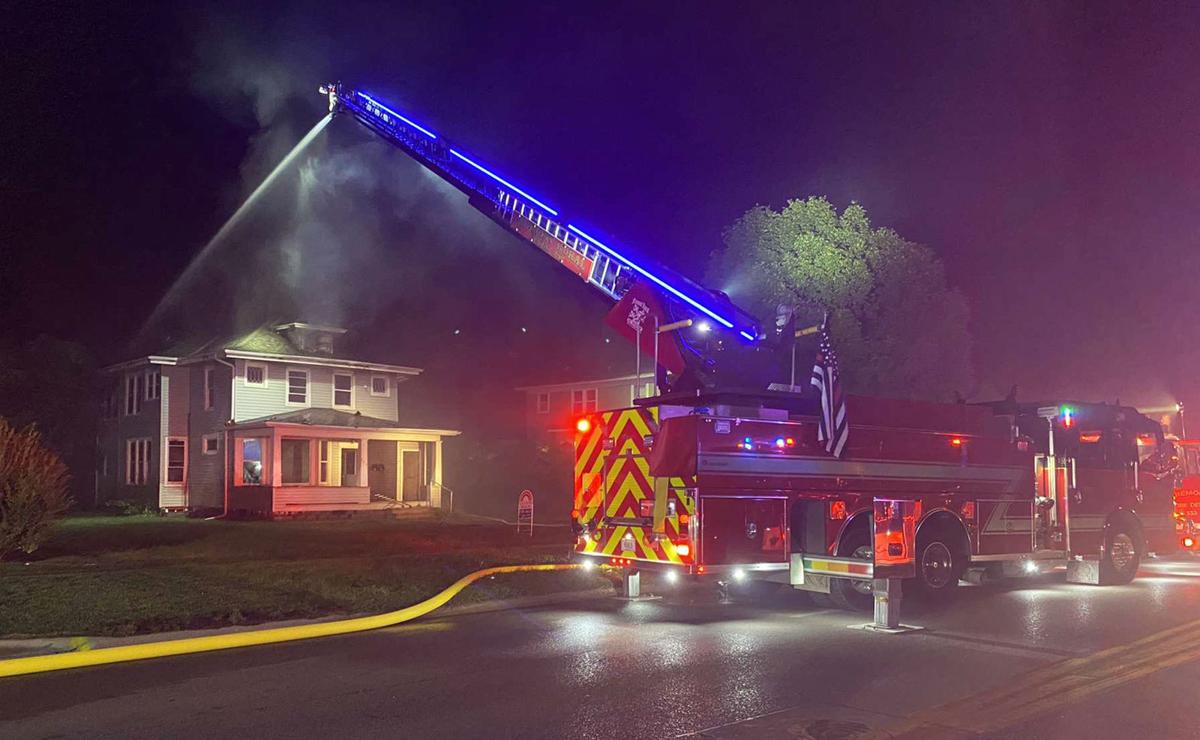 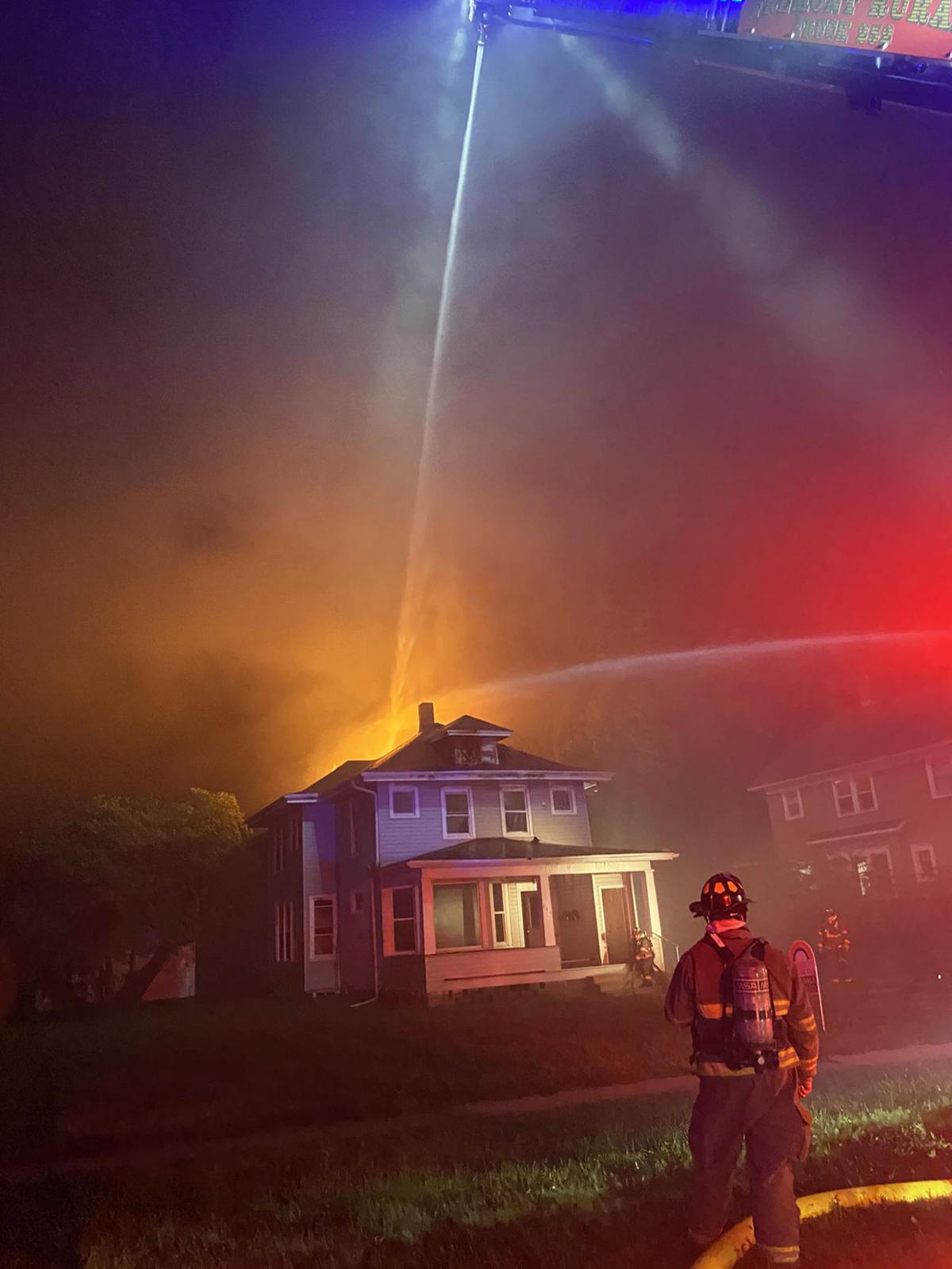 Capt. Pat Tawney of the Fremont Fire Department said the call came in at 1 a.m. of a fire at 944 E. Military Ave.

All three shifts of paid Fremont firefighters would be called to the scene.

Capt. Jamie Meyer said the large house had been converted into three apartments and had been vacant for some time and was up for sale.

Meyer said the fire was encountered around the back side of the home on a deck area for the back lower apartment.

Firefighters on B shift knocked most of that fire down along with fire in the basement. A and C shifts were called to the fire.

Meyer said when he arrived heavy smoke was pushing out an attic gable window.

This indicated fire had breached into the attic.

“We were determining how to make the best attack on the fire, when part of the roof collapsed and fire shot through the roof,” Meyer said.

Most of the work in the blaze was spent pulling ceilings down on the second floor to expose pockets of fire.

“That was tedious and hard work,” Meyer said. “Guys were going through their second to third bottle of air.”

Firefighters wear self-contained breathing apparatus with bottles of breathable air when they enter atmospheres dangerous to life and health.

Meyer said bottles are intended to provide air for 45 minutes.

“But when you’re working hard, pulling ceilings, you might get 20 to 30 minutes out of a bottle,” Meyer said. “That’s doing very well.”

“We sent them up to help pull ceiling in areas where we still had active fire,” Meyer said.

The concern for firefighters involved portions of the ceiling falling on them.

“That’s a concern. The attic and stuff falling on you. You always have that when you’re pulling ceiling. Will a big chunk or something come down? But it never did,” Meyer said.

Work continued to extinguish the blaze.

“We thought we had the fire knocked out, then a north wind picked up,” he said.

Firefighters went in again and pulled more of the second floor ceiling down to expose any small area that had hot embers and extinguish them.

To completely extinguish the blaze, firefighters had to pull the underside of the eaves from both existing sides and across the front of the house.

“Finally, we got all of the hot spots, he said.

Meyer said the Nebraska State Fire Marshal was called in and the cause of the fire is under investigation. He said the house was totaled.

When Pastor Jill Harman thinks about poignant moments, she recalls a time with a troubled boy.

WinItBack, TEA Party Patriots of Dodge County, will be meeting from 6:30-8:15 p.m. Thursday, Sept. 16, in the main meeting room at Keene Memor…

As healthcare workers don personal protective equipment just about every day, students at Fremont High School recently got to step into their shoes.