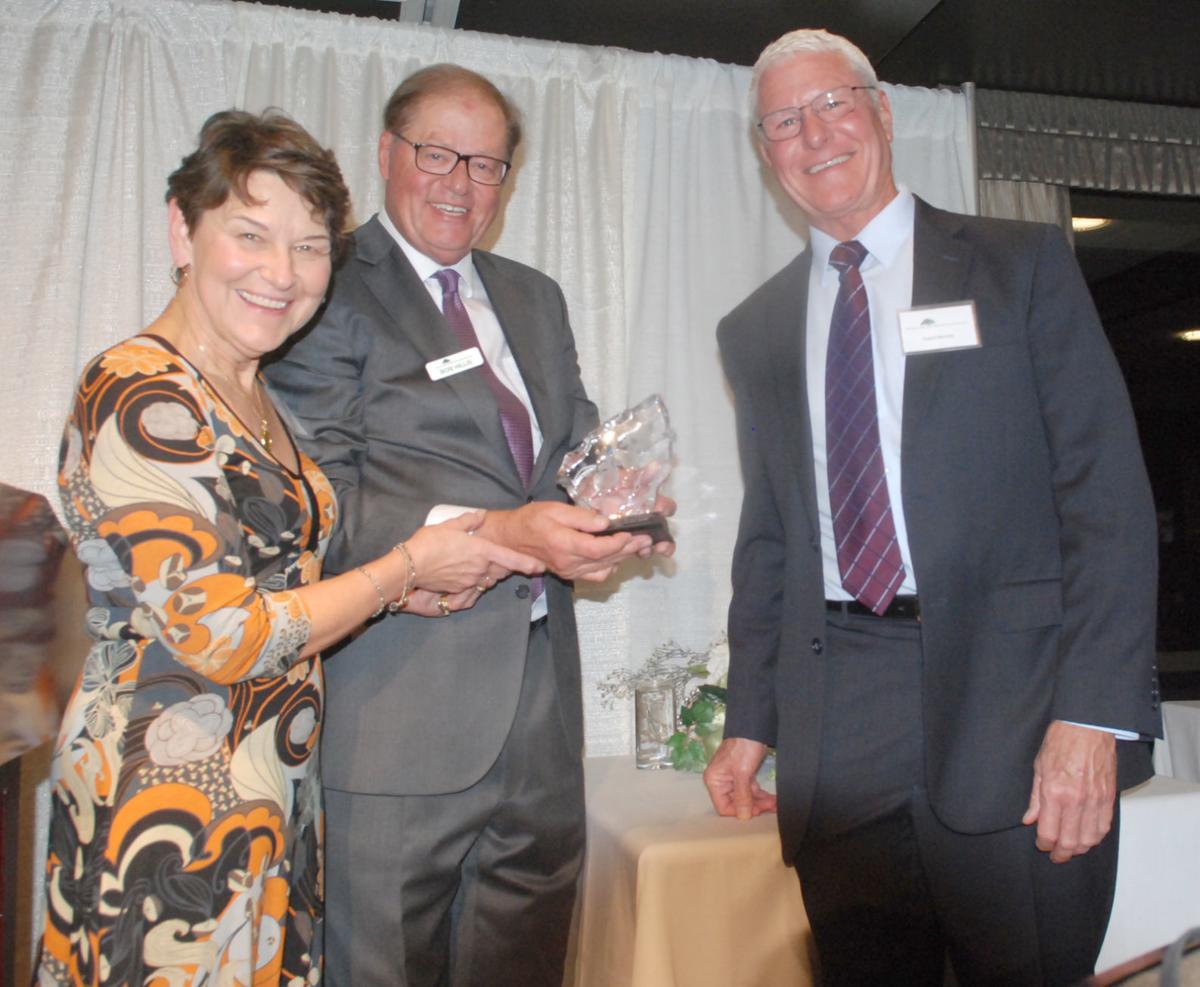 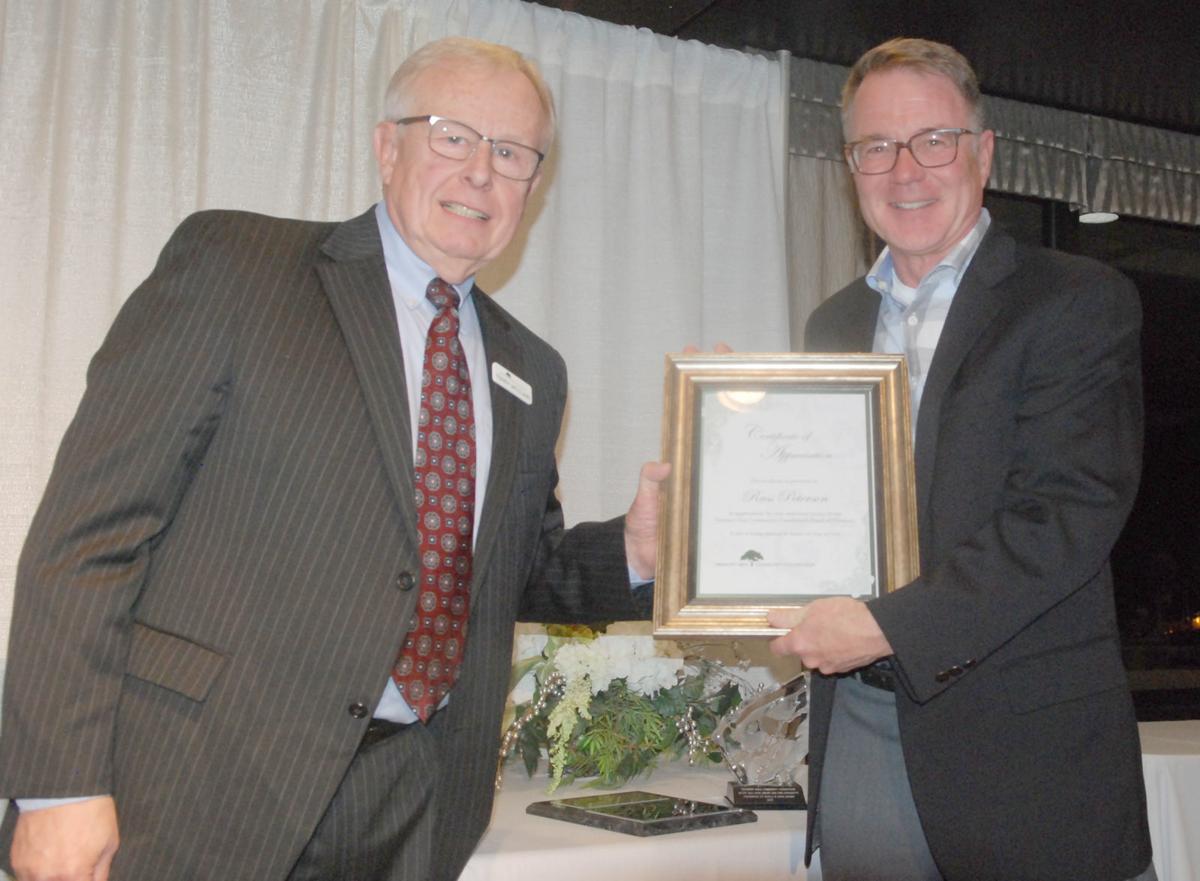 Terry McClain, left, vice president of the Fremont Area Community Foundation, presents a Certificate of Appreciation to Russ Peterson for his years of service on the foundation's board of directors. Peterson joined the board in 2002. 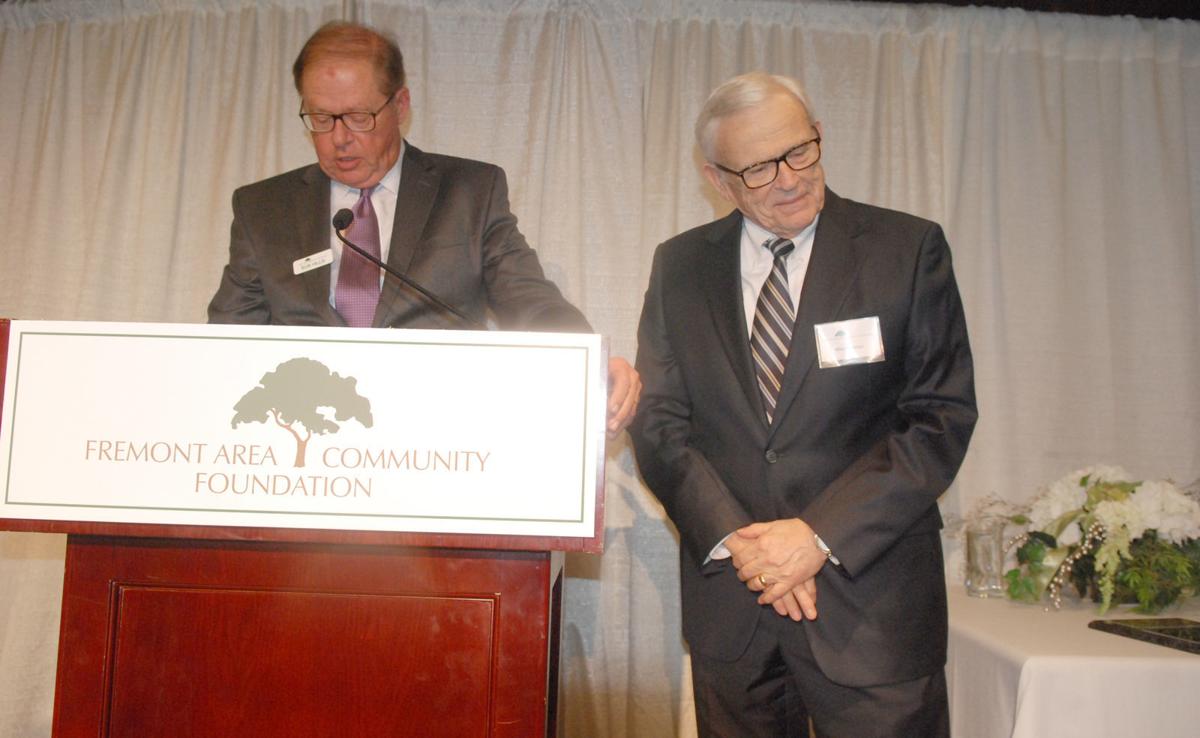 Terry McClain, left, vice president of the Fremont Area Community Foundation, presents a Certificate of Appreciation to Russ Peterson for his years of service on the foundation's board of directors. Peterson joined the board in 2002.

The Fremont Area Community Foundation paid tribute to community members for service to people throughout the area.

David and Sheila Monke are the 2019 Betsy Mulliken Award for Philanthropy recipients.

“This award recognizes an individual, family or organization who has a distinguished record as a philanthropic leader whether through volunteerism, financial resources or both,” said FACF President Bob Hillis.

The Monkes own Nebraska Irrigated Seeds and have supported numerous charities.

Sheila Monke completed nine years on the FACF board and serves as board secretary of the Fremont Health Foundation. She’s past president of The Bridge and volunteers for the Coalition on Human Trafficking.

In 2014, then-Gov. Dave Heineman recognized her as the Nebraska Mothers Association “Mother of the Year.”

She is known for her work with a team of moms who created “Roots to Wings,” a nonprofit organization with a mission of offering employment opportunities and improving the quality of life for those with disabilities.

David Monke has served on the Fremont Family YMCA board for 23 years, including as chairman and chief volunteer officer, and now serves on the YMCA Foundation Board, and on the Airport Advisory Committee.

“It is quite humbling,” Sheila Monke said of the honor. “We somewhat decided we are private people. We tend to go home to the farm and we like to stay there and not ramble out and about too much, but it’s been quite awesome to have the opportunity over these nine years to have served on this foundation. It’s the opportunity to meet some of the most amazing people and work side by side with them and also to be on the scholarship committee and read about some of these most amazing individuals.

“When you do this work, it’s quite rewarding,” Monke noted. “It comes back to you 10 times over and we thank you sincerely for this honor.”

Wiseman recently was recognized by the Nebraska State Bar Association for 50 years of service in the practice of law. He has taken part in various community activities and organizations.

Wiseman served on the FACF Grants Committee since its inception.

He serves as a trustee of the Lester A. Walker Foundation which directly funds grants to charitable organizations and provides funding to the community foundations’ Lester A. Walker Fund to further the grant-making efforts of FACF.

Wiseman was instrumental in securing the very first gift to the FACF in 1980 – a bequest of $53,000 from the late Ethel Whalen.

During the banquet, Wiseman thanked FACF for the award. He also appreciated the recognition of Whalen.

“Contrary to popular belief, Ethel Whalen was not a resident of Fremont, Nebraska,” he said, noting that her sister, Hazel, was married to Dodge County attorney John Gumb.

Whalen lived in New Jersey and New York. After she retired as a school teacher, Whalen moved to Omaha to spent time with Hazel after John died.

Neither Whalen nor the Gumbs had children.

Wiseman proposed the idea of a community foundation to his client, Whalen, who upon her death – and on the condition that a foundation be formed – left the gift from her estate.

FACF will celebrate its 40th anniversary in 2020.

Dental hygienist Jazmin Morales wore a bright smile as she thanked the Fremont Area Community Foundation for helping her.

Sgt. Hector Ramirez remembers what it was like to get a care package while serving in Iraq in 2004.