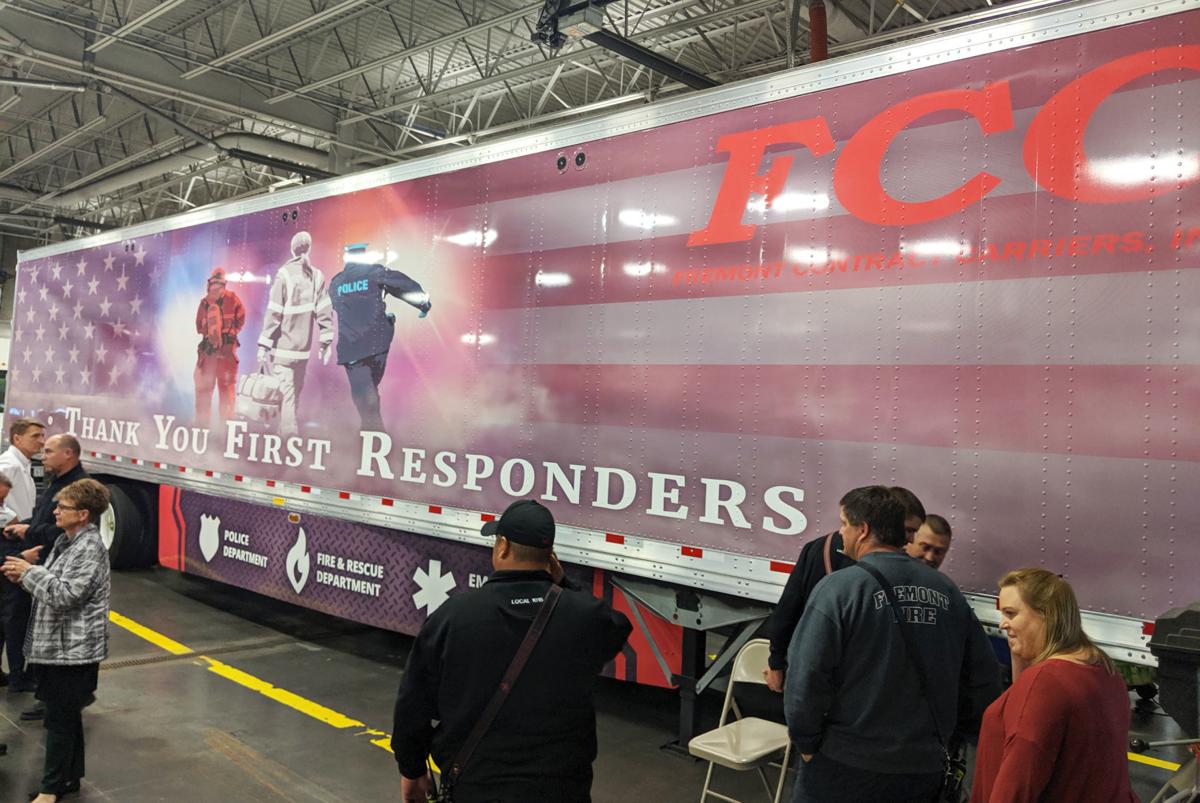 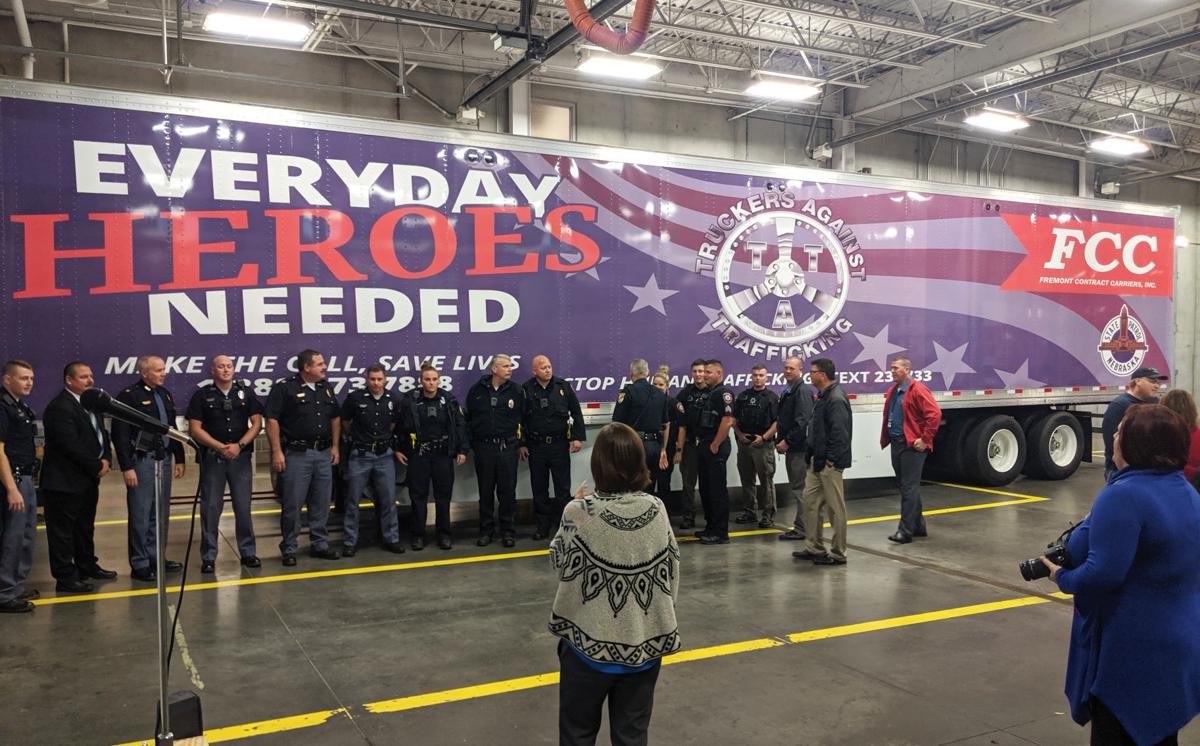 Law enforcement pose in front of one of Fremont Contract Carriers' new trailer wraps Thursday afternoon. One of the wraps includes a phone number for the National Human Trafficking Hotline. 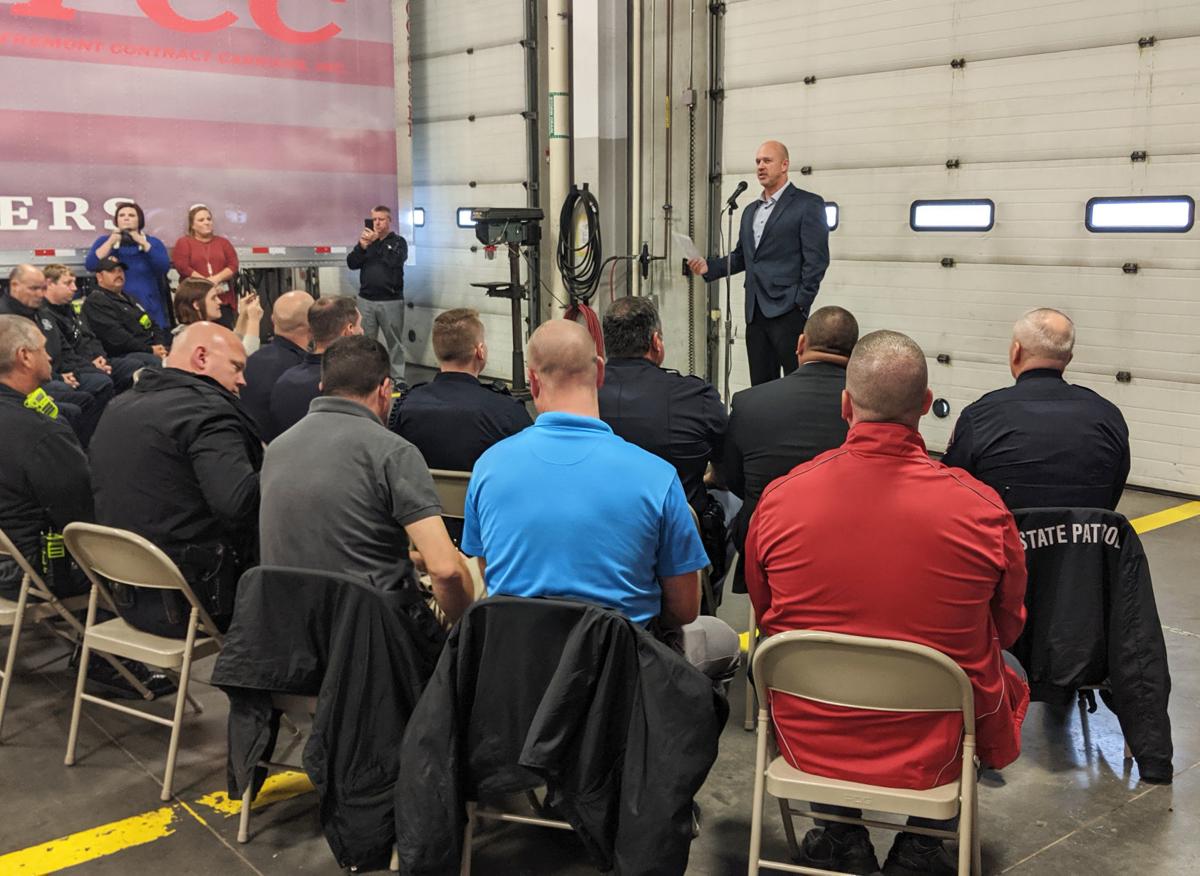 The two wraps were unveiled at an event at FCC attended by the Nebraska State Patrol, Fremont Police Department and other agencies.

One wrap states, “Thank your first responders,” and features depictions of a firefighter, paramedic and police officer.

The other wrap features a symbol for the Truckers Against Trafficking and NSP, stating “Everyday heroes needed.” It also includes a phone number for the National Human Trafficking Hotline.

Tim McCormick, president and CEO of FCC, told the crowd the company first started wrapping trailers five or six years ago at the request of Eric Andry, vice president of operations.

“The first time we did a trailer wrap, which Eric was pushing for pretty hard, and we’re glad he did, it had to do with a patriotic wrap to honor both current combat people, veterans and people who gave the ultimate sacrifice,” McCormick said.

After a positive response from the community, McCormick said FCC continued to have trailer wraps, most of which included a patriotic theme.

McCormick thanked Andry for the work he did on the trailer wraps and thanked the designers as well.

“It’s a tough thing to do, to incorporate all branches, all levels, so they did a great job,” he said.

NSP Colonel John Bolduc also spoke at the event and thanked the audience for coming to the see the new trailer wraps.

“It’s really my privilege on behalf of the Nebraska State Patrol to thank FCC and their incredible team here for this partnership that we have in trying to combat a very vicious and challenging crime that is happening across our country literally right under our noses,” he said.

Not only does FCC care about its truck drivers, but also about the community, Bolduc said.

“They have an outstanding safety record,” he said. “So it would be no surprise to see a company like that come alongside us in law enforcement and first responders and take on an issue like human trafficking.”

Bolduc also said he hoped that the new trailer wraps would help bring the issue of human trafficking to the public light.

Bolduc also thanked Andry for his work on the project and for organizations like Truckers Against Trafficking for getting the message out.

“This is just the beginning,” he said. “We’re going to not only reduce human trafficking, but we’re going to stomp it out here in Nebraska and across the country.”

McCormick said truck drivers play a big role in preventing human trafficking since much of this activity happens near truck stops.

“Our truckers see an awful lot, so giving law enforcement a lot of other sets of eyes has already proven to be very beneficial,” he said. “And it has led to busts and apprehending criminals that are participating in the trafficking, so it’s been working great.”

The Fremont City Council voted to end the 23rd Street viaduct project after nearly two decades of planning during its meeting Tuesday night.

A new monthly book club for youth is starting this fall at Keene Memorial Library in Fremont.

Veterans ride for one of their own

After 17 years and thousands of miles, Harry Franklin Carrier has been laid to rest.

Lincoln Premium Poultry/Costco Wholesale will be having an open house from 1:30-5 p.m. Oct. 19 at its new poultry processing facility, 1325 E.…

Lunch menus for the week of Oct. 14

Law enforcement pose in front of one of Fremont Contract Carriers' new trailer wraps Thursday afternoon. One of the wraps includes a phone number for the National Human Trafficking Hotline.