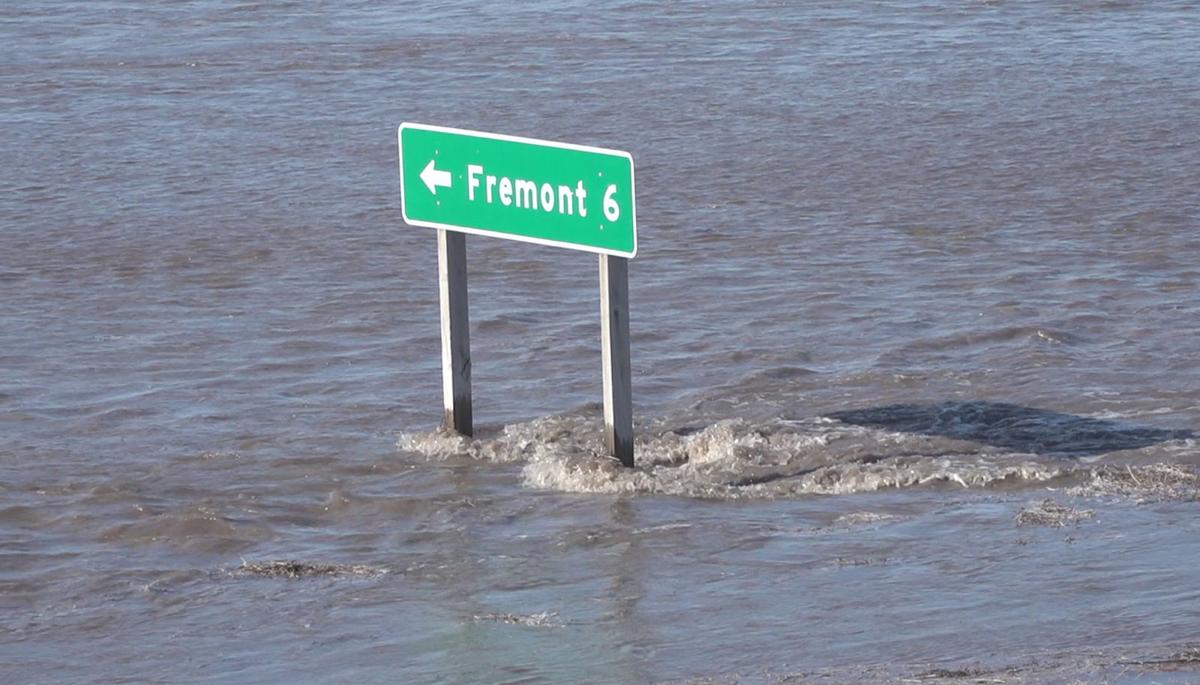 Flood waters surround this commonly seen sign around Fremont during mid-March flooding. Fremont is among towns included in a documentary called, “And the Floods Came: Nebraska 2019,” which will premiere at 9 p.m. Sunday on NET- Nebraska’s Public Broadcasting Station. 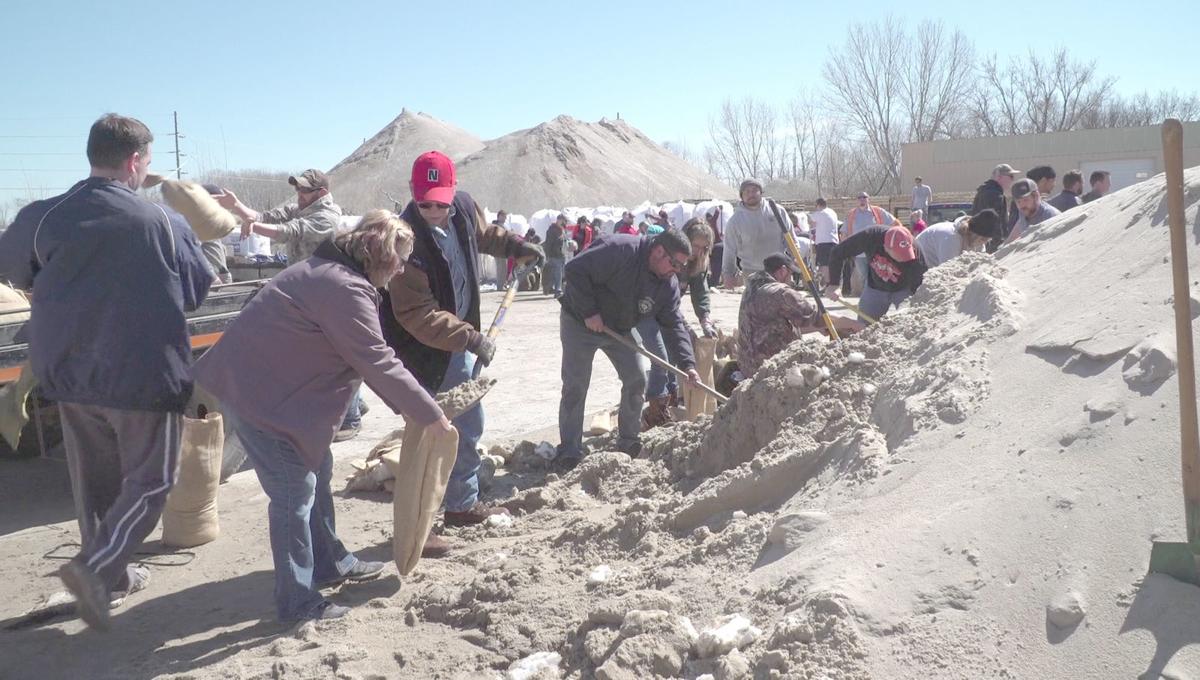 Sandbag crews assist in attempts to plug holes in the levees around Fremont. 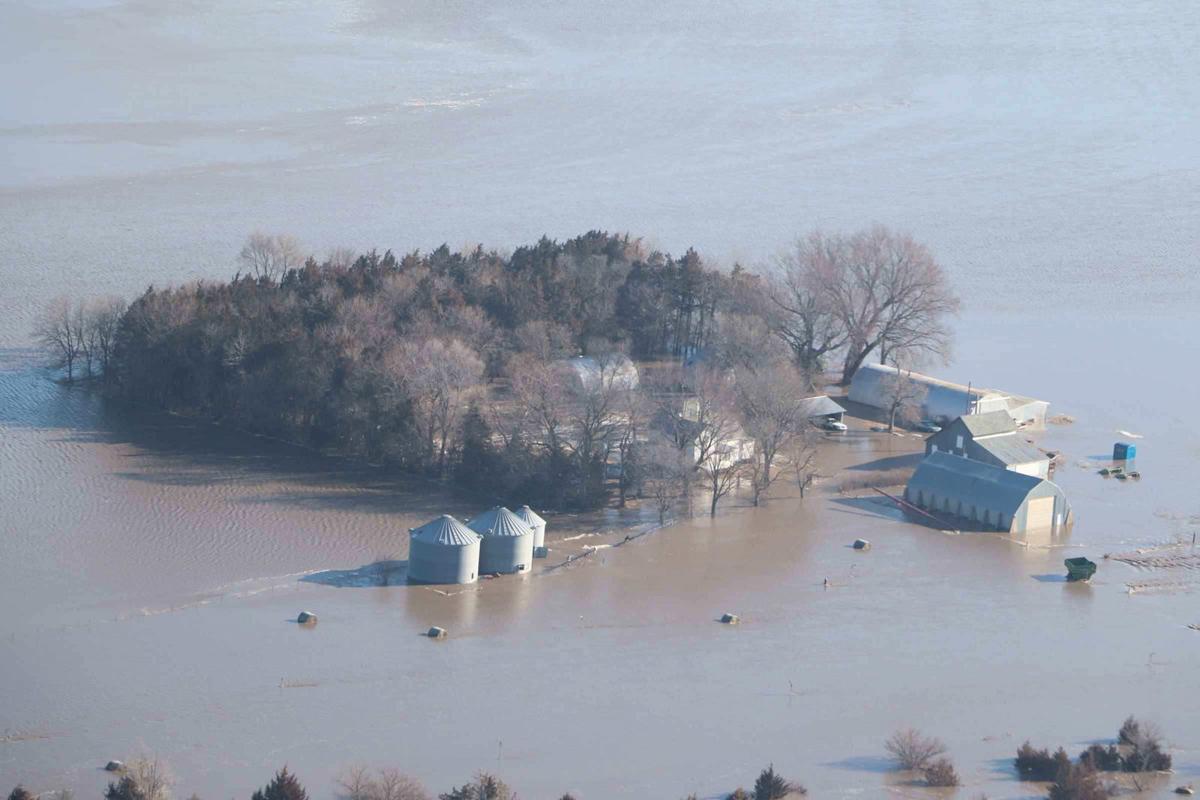 A flooded farm outside of Fremont, taken during the Governor Pete Rickett's fly-over in March. 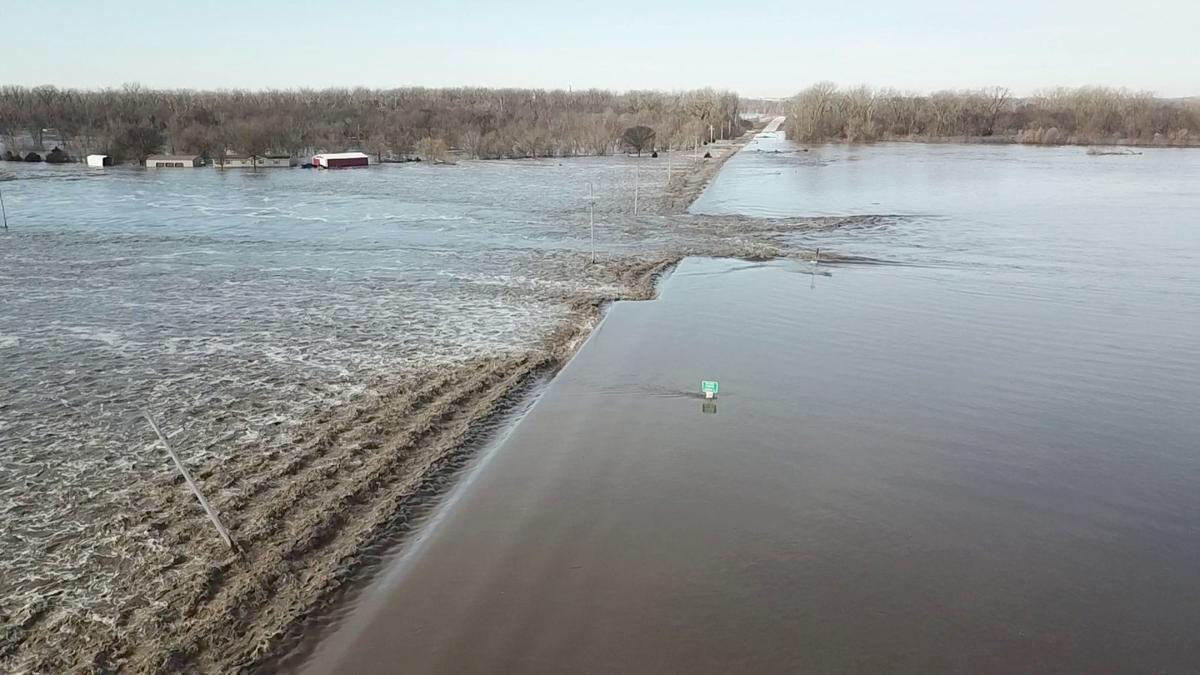 Image from a drone at the Dodge County Line near Nickerson 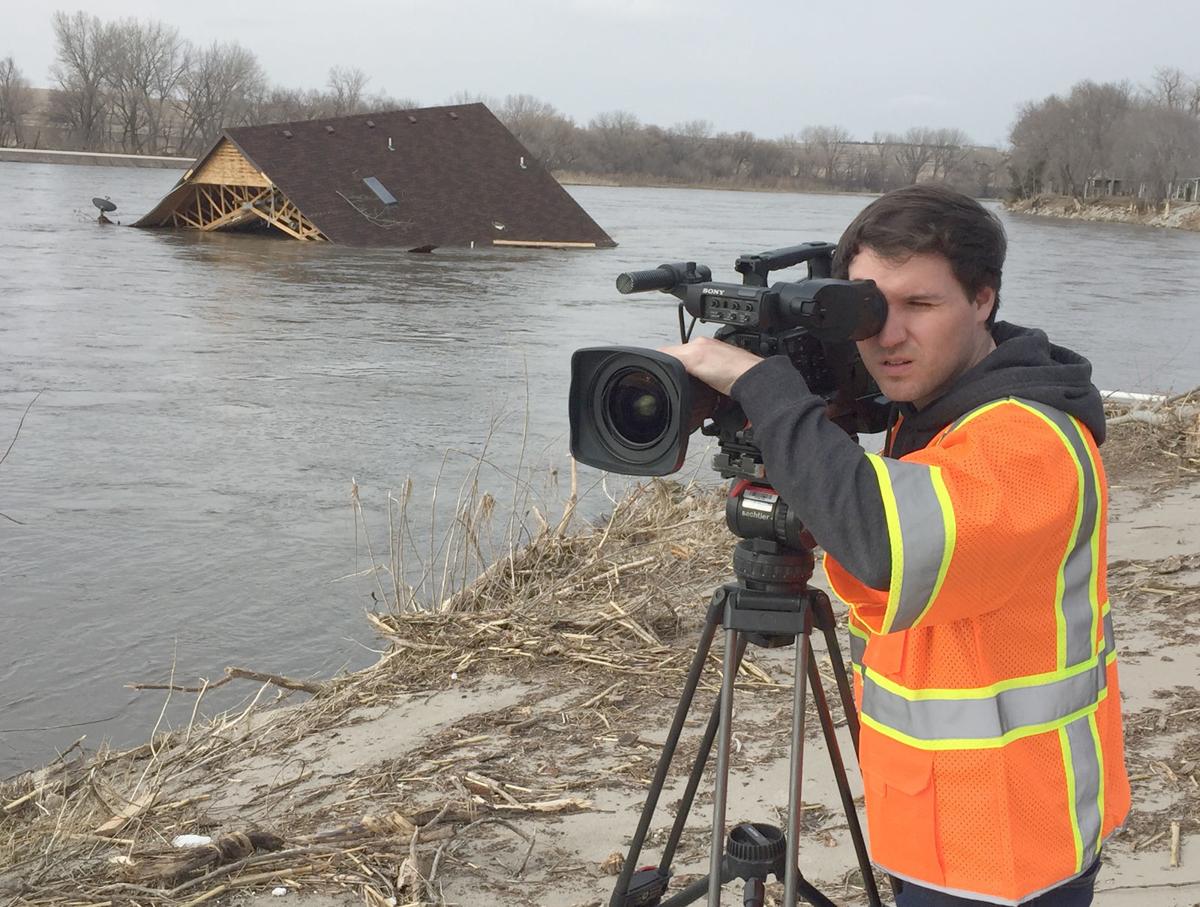 The scenes are familiar:

For Fremonters, these were just some of the effects they witnessed when the area was hit with historic flooding.

Now, Fremont area residents—along with many others across the state—will be able to see a documentary about the worst natural disaster in modern Nebraska history.

The program called, “And the Floods Came: Nebraska 2019,” will premiere at 9 p.m. Sunday on NET- Nebraska’s Public Broadcasting Station.

In a day-by-day, and at times minute-by-minute account of the March flooding, NET News documents the stories of survivors, first responders and local communities, the network said in a prepared statement.

Dramatic video and still photographs capture the aftermath and heartbreak shared by Nebraskans who witnessed dramatic rescues and horrific damage from failed dams and rushing water that carried huge slabs of ice.

Fremont – which essentially became an island during the flooding — is included in the documentary, Senior Producer Bill Kelly told the Fremont Tribune.

Kelly said John Haxby, a veteran storm chaser, has family in Fremont and decided to stay in the city even when it was clear the community was becoming sealed off by flood waters.

Haxby captured valuable moments and images of people in Fremont and the nearby area dealing with the flooding.

“He spoke to so many people,” Kelly said. “He spoke with people literally as they were filling sandbags. He talked with people up in Valley as they were frantically filling their cars with their belongings to flee the waters. There are representatives of the relief organizations, who were providing meals to people who couldn’t occupy their homes, and people who were helping in so many ways at that point.

“It’s a range of people – from people who were on the battle lines to the people who ended up being victimized by this flood and were doing their best to help.”

Kelly said the most difficult part in assembling the program was selecting which stories to tell.

“When you figure that there were 70 counties impacted by this storm and dozens of individual communities and we had to fit all this in an hour – it was very daunting to pick and choose,” Kelly said. “So in addition to Fremont, we spent time in the communities of Dannebrog and St. Edward and we also spent a fair amount of time recounting the failure of the Spencer Dam and the impact on the village of Niobrara.”

The documentary includes eyewitness accounts of the devastation and deeply personal stories of survival. In suburban communities near Omaha, it examines how major arterial roadways were literally swept away.

“Part of what made this program a lot easier was the number of people who documented their own story and the story of their communities,” Kelly said. “It speaks to our times that so much of the video that we have is from cell phones and security cameras and drones that people had available to them that – in many cases – documented what was going on in these towns, minute by minute.”

Kelly noted that 53 separate contributors are listed in the credits. Contributors range from the Nebraska National Guard and the Farm Bureau to individuals who pulled out cell phones and recorded what was happening in their own homes.

“What I’m most pleased with about the program is there may be video and photos that people have already seen on Facebook and Twitter, but they never really got the context of what was happening in the community at the time,” he said. “By creating both a timeline and – quite literally putting these videos on a map—we will be able to show people what was happening as this incredible piece of video was unfolding and – in some cases – the story behind that video.”

Kelly said people understand how flooding affected their individual communities, but has found that the fact that a very similar story was unfolding in 100 other Nebraska towns at the very same time is kind of a surprise to people.

“Every town in Eastern Nebraska had a 100-year flood at the same time,” Kelly said. “That meant that each of these towns was on their own. They couldn’t always rely on the town next door to help. Every volunteer fire department was helping everybody else, but the resources were so thin, it meant everybody had to pitch in ways that people had never pitched in before.”

Kelly agrees with people who say it will take years to recover from the flood.

“It’s also very deceiving when you drive around Fremont or Valley or Nickerson,” he said. “They all look pretty normal right now, but the type of damage that occurred to individual homes and individual businesses and the impact on people’s budgets, what their tax load is going to be, what it’s done to people’s relationships in their own families – it’s going to be years before we figure that out.”

During and after the flooding, many stories arose about how people helped one another and Kelly found that as well.

“There are so many examples of people stepping up – even when they weren’t asked – and taking a role that they’ve never had in their community before – maybe it was clearing debris, maybe it was cooking a meal or maybe taking a stranger into your house for a few days. You heard those stories time and time again,” Kelly said.

The communities are moving ahead.

“They may not be thriving yet, but they’ve got their legs back under them and a lot of them have a plan for moving forward,” he said.

Kelly added that he has seen definite interest the program.

“Every time we’ve put something out on social media about this program, people have just gone nuts in sharing the Facebook posts. People really want to watch this program. They want their story told,” he said.

Updates and more flooding coverage from NET News is available at netNebraska.org/flood.

Adam Monke’s fitness goals could have been sidelined after a football injury almost nine years ago.

If you like cars, pork sandwiches and games, you might want to stop by Good Shepherd Lutheran Church on Sunday.

On Sunday, two area congregations will gather for a festive event.

School board hears about proposed video display board

Members of the Fremont Public Schools board of education heard about a proposal for a video display board for the Al Bahe Gym.

Flood waters surround this commonly seen sign around Fremont during mid-March flooding. Fremont is among towns included in a documentary called, “And the Floods Came: Nebraska 2019,” which will premiere at 9 p.m. Sunday on NET- Nebraska’s Public Broadcasting Station.

Sandbag crews assist in attempts to plug holes in the levees around Fremont.

A flooded farm outside of Fremont, taken during the Governor Pete Rickett's fly-over in March.

Image from a drone at the Dodge County Line near Nickerson