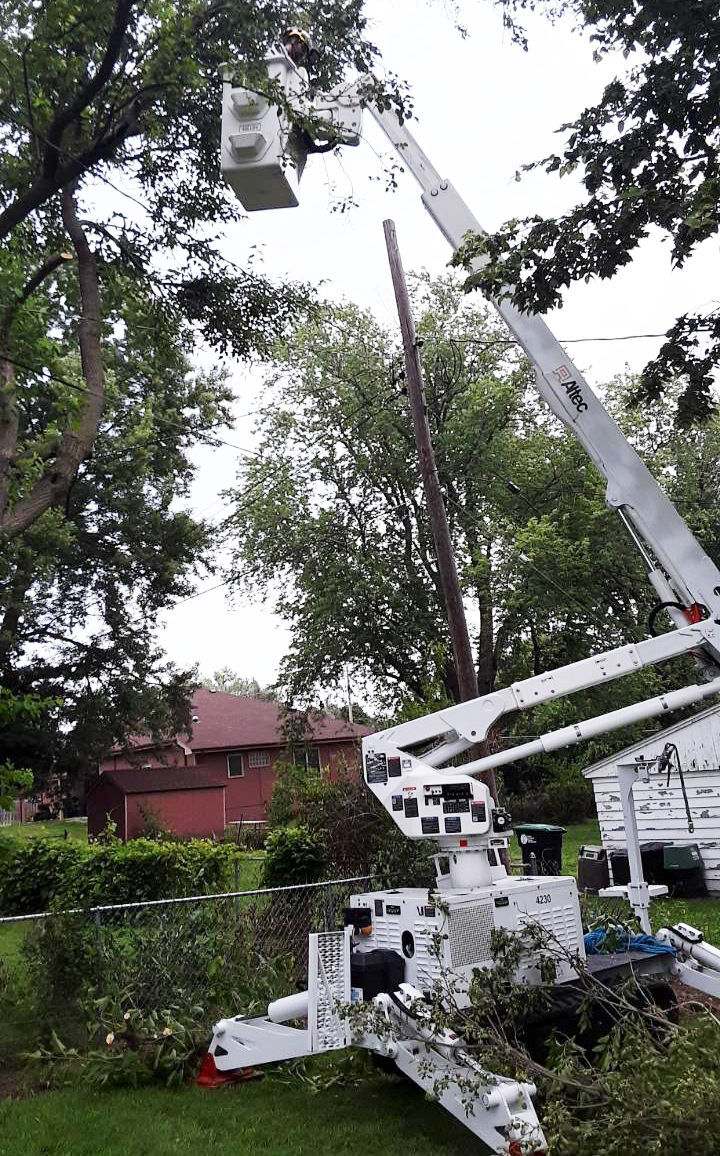 A contracted tree crew works on removing a tree from a powerline in Omaha last week. The crew was sent by Fremont to assist during the aftermath of a July 9 storm. 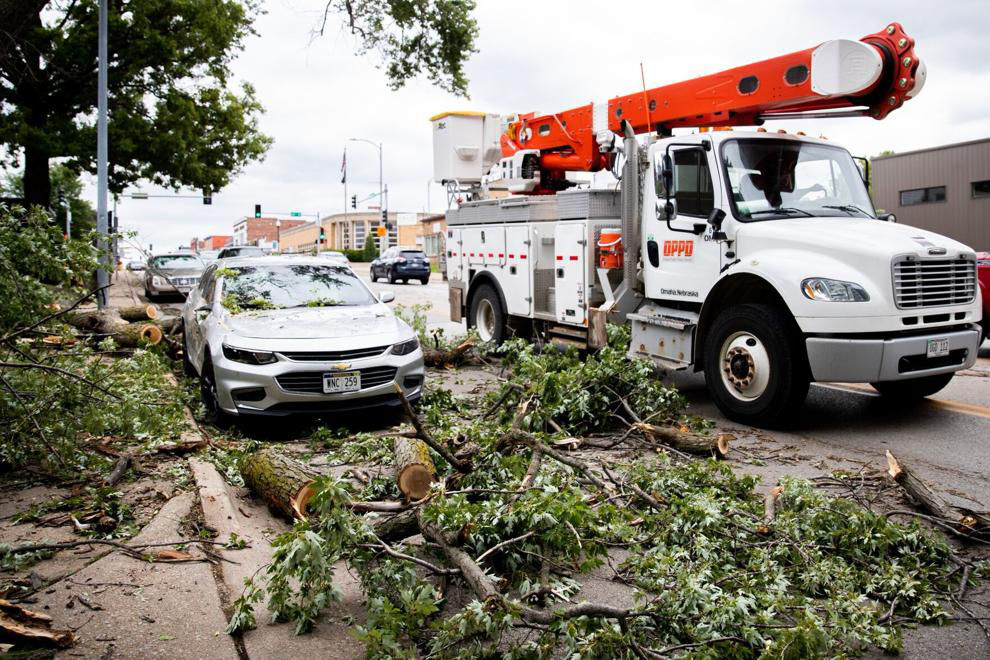 An Omaha Public Power District vehicle drives past a car damaged by a fallen tree near 63rd and Maple Streets in Omaha on July 10. 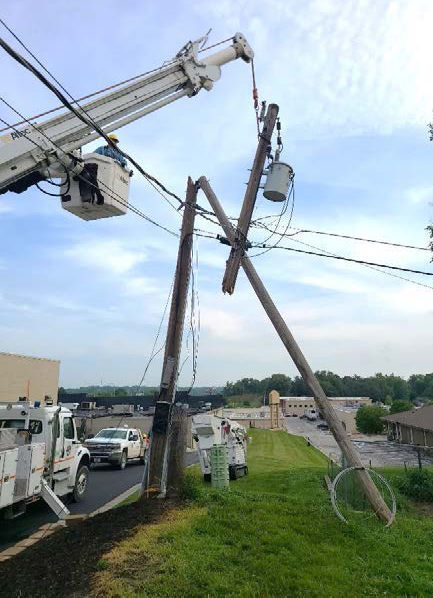 Fremont lineworkers repair a power line pole that had a transformer snap off during a July 9 storm in Omaha.

During a heavy storm in the Omaha metropolitan area earlier this month, Fremont Electrical Distribution Superintendent Mike Royuk said he kept expecting a call from the Omaha Public Power District.

“And then that same morning, OPPD called me around 6 o’clock in the morning and said to pretty much send everything we could spare,” he said.

To assist with damages from the 90 mph winds seen on the night of July 9, Fremont sent six lineworkers to Omaha to work throughout the weekend.

While Fremont saw a handful of power outages that night, Royuk said it was nothing compared to Omaha, which had more than 180,000 households without power.

As many Nebraska cities and utilities have mutual aid agreements for these instances, Royuk said Fremont has helped out others before, as well as received help of their own.

In the early morning after the storm, Royuk went through his call list and ended up getting Kent Deming, Dillon Hanson, Conner Jenkins, Jim Jorgensen, Chris McManus and Brad Wentz to help out OPPD.

“I sent two three-man crews with a pickup, a digger and a bucket truck each,” he said. “And we all met at the shop at 7 in the morning and they went down there.”

The six lineworkers spent all day Saturday and Sunday assisting in clearing trees off of power lines and setting poles.

“The trees had blown over and kicked lines and power poles down, so for the most part, we worked on that stuff,” Royuk said. “And when they start larger groups of people out, sometimes you can set one pole and get 1,200 people back on.”

Although Fremont was too busy to send any more workers after the initial support, Royuk said he sent a contracted tree crew to help clear the power lines last week.

“They had a lot of linemen coming in from other areas and needed some more tree trimmers than linemen at that point,” he said. “And they wanted them to run our backyard equipment, so I said, ‘Well, I can send a crew down that does that for a living for us.’”

All in all, Royuk said he was proud of Fremont’s lineworkers stepping up to the task and was glad to help out Omaha in a time of need.

How Olympic timekeeper Omega keeps up with the times

Perfect weather for the return of Lollapalooza

Perfect weather for the return of Lollapalooza

One year on: Birth and death in a Beirut hospital

One year on: Birth and death in a Beirut hospital

Mr. and Mrs. Habitat pageant fundraiser set for this Saturday

Four couples will dress, perform and fundraise their way to the top for the Fremont Area Habitat for Humanity’s Mr. and Mrs. Habitat pageant t…

A concert at Fremont Opera House, Fairytale Ball Weekend and a LEGO exhibition are among the area events planned for this weekend.

Keene Memorial Library will be offering a live trivia event geared towards adults. This will take place from 6:30-7:30 p.m. Monday, July 26, i…

With business vendors lining the streets of downtown, MainStreet of Fremont will host its third annual Summer Fest this Saturday.

The Nebraska Pinto Horse Association will host its Hot Spots “Beat the Heat” Pinto Show at Christensen Field this Saturday.

Dodge County Board Chairman Bob Missel has signed a County Disaster Declaration for damage that occurred during the June 24 windstorm.

Spectrum announced Thursday it has doubled the starting download speed of Spectrum Internet from 100 to 200 Mbps in the Omaha area, including …

A contracted tree crew works on removing a tree from a powerline in Omaha last week. The crew was sent by Fremont to assist during the aftermath of a July 9 storm.

An Omaha Public Power District vehicle drives past a car damaged by a fallen tree near 63rd and Maple Streets in Omaha on July 10.

Fremont lineworkers repair a power line pole that had a transformer snap off during a July 9 storm in Omaha.