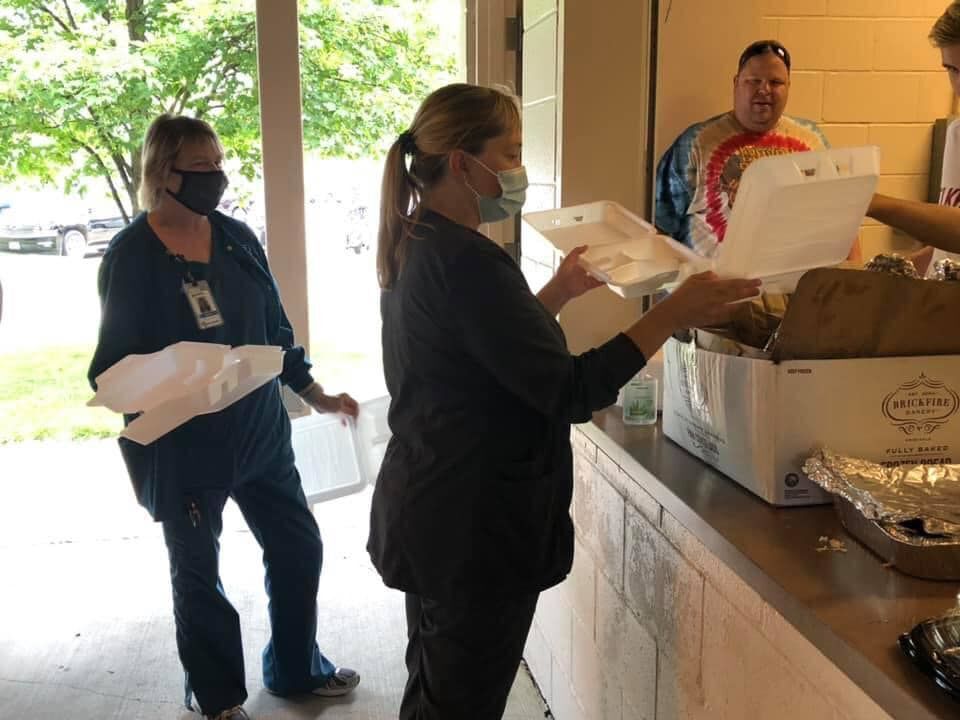 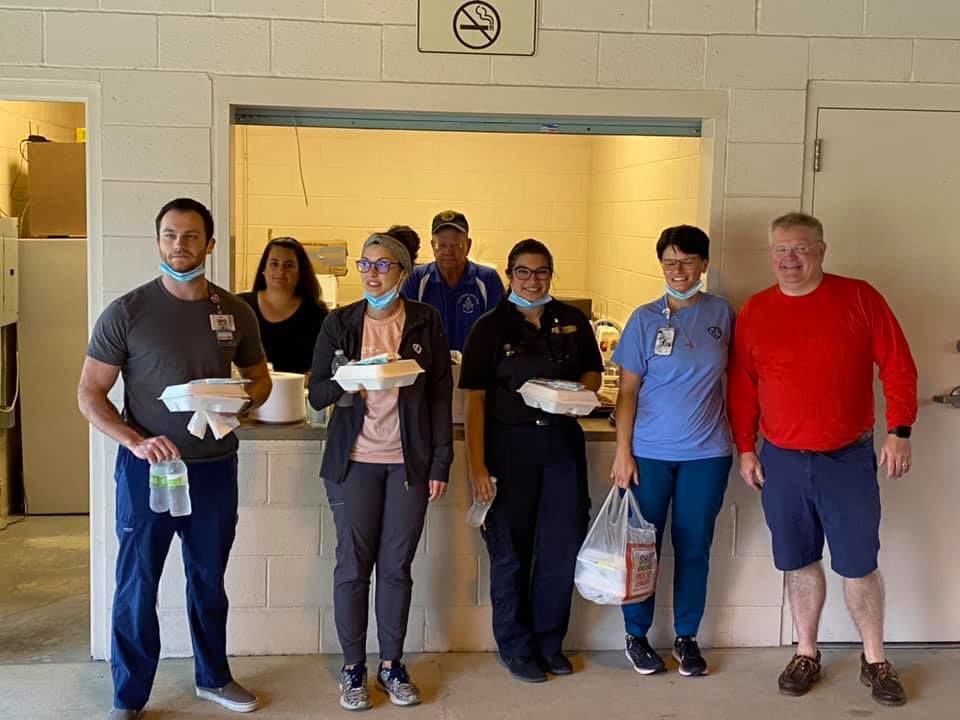 The Fremont-Waterloo York Rite Masons, made up of lodges throughout the Omaha area, organized a free lunch for Methodist Fremont Health staff on Saturday at the Masonic Eastern Star Home for Children. 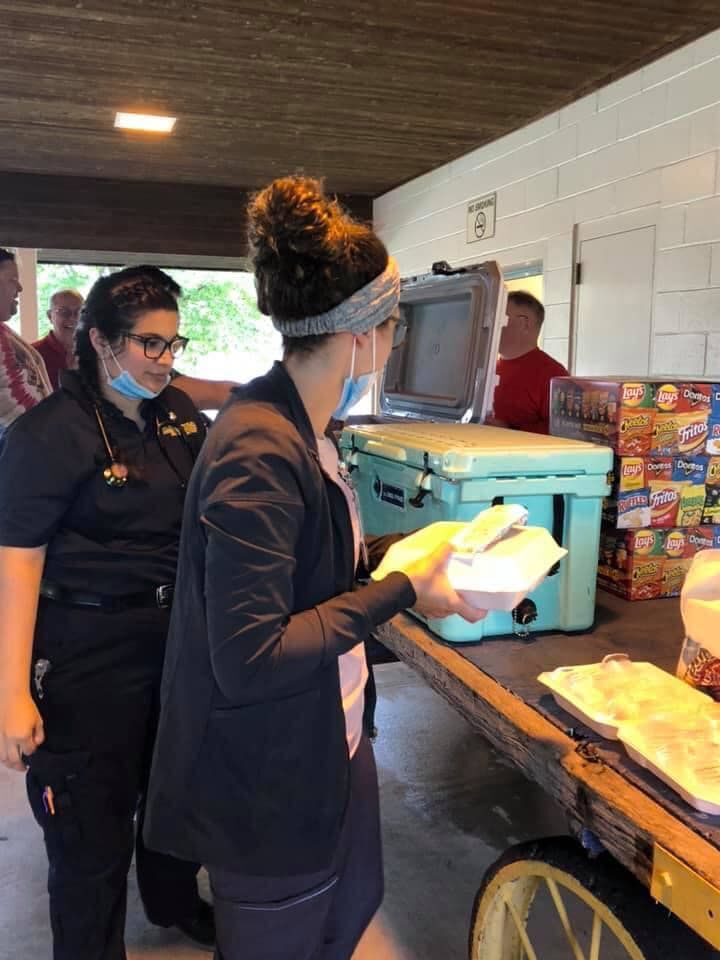 Two months ago, an idea hatched inside Daren Kizlin’s head.

Kizlin, a member of the Fremont-Waterloo York Rite Masons, wanted to recognize the work of staff at Methodist Fremont Health after over a year of tireless work to battle the COVID-19 pandemic.

So, he suggested that the masonic body put together a picnic for healthcare workers at the hospital at a group meeting. While Kizlin said the York Rite Masons are typically not as active as other bodies, he said the members jumped on the idea immediately.

“I thought it would be a really nice thing if we said thank you to the hospital and everybody jumped on the idea and said: ‘Let’s do it,’” he said. “And I came up with fun activities and ideas to interact with the community, and they just ran with it.”

The body, made up of lodges throughout the Omaha area, organized a free lunch for Methodist Fremont Health staff on Saturday at the Masonic Eastern Star Home for Children.

When Kizlin stepped up to take charge of the lunch, he knew it would be one of the “largest adventures” he had ever suggested.

“And I really just hoped and prayed that it would be well received by the hospital and that I would get a lot of volunteers from our organization,” he said.

He received both. The lunch served nearly 200 staff members from Methodist Fremont Health and brought in several volunteers from lodges throughout the area.

“I ended up getting an unbelievable turnout for volunteers and that really enthused me,” he said.

Kizlin said the most difficult obstacle to overcome was preparing for the event under the tight two-month deadline. However, strong communication and collaboration led to a seamless event.

“That was one of the daunting parts was that I didn’t know how well we would be able to pull it all together in such a short time,” he said. “Everybody came together and it worked.”

Methodist Fremont Health’s size and connection to Fremont helped make the decision to host an event for its staff an easier decision.

“Most of them live right in the town and in the neighboring communities, cities and towns,” he said. “So you’re saying thank you to the people that you actually live with and see all the time. That helps.”

Shawn Shanahan, executive director of development and community health for Methodist Fremont Health, and Fremont Health Foundation, said the event was another example of the support the hospital has received from the community during the pandemic.

“This was a great opportunity because it allowed for staff to leave the building and take a walk outside to be acknowledged and feel appreciated from our neighbors,” she said. “It was an amazing feeling for our team.”

Shanahan said the staff felt “very appreciated and valued” during the lunch.

“The amount of community support they received to support the luncheon shows that our community really rallies around troubled times and helps out,” she said. “It’s a great opportunity to step away and feel valued.”

The luncheon received sponsorship and donations from several businesses and organizations, including:

“They were all more than willing to make donations without any hesitation,” he said. “We were grateful for their help.”

Kizlin said everybody knows somebody that is in the field of healthcare. He recognized the added work healthcare staff have taken on over the course of the pandemic.

The long hours, extra shifts and added pressures of working on the front lines of the pandemic can take a toll and Kizlin wanted to ensure staff at the hospital knew they were supported by the community.

“It was like an unbelievable experience to be able to pull this together,” he said. “Even the people that weren’t able to make it they saw the invitation knew that we were thinking of them and were grateful.”

Kizlin said the event’s success has kickstarted new ideas inside his head to help bring together Fremont’s healthcare community.

He said he looks at the hospital’s parking lot and sees the potential to host a drive-in movie night available for hospital staff and their family or even working with other bodies, such as Shriners, to visit Methodist Fremont Health during the parade that takes place on John C. Fremont Days.

“I’m always coming up with other crazy ideas,” he said. “I’m the crazy idea guy.”

Whatever comes next, Kizlin said he simply wants to show the hospital that the community recognizes the work it is doing.

Community has remained close to Jamie Simpson’s heart throughout her decade-long career at Midland University.

The Fremont Planning Commission unanimously passed both the preliminary and final replat for the Fremont Technology Park during its Monday meeting.

Bluffs Trinity Lutheran Church will be hosting its “Christmas in July” service at 10:30 a.m. Sunday, July 25.

Road closures to take effect as work on 505 Building begins

With business vendors lining the streets of downtown, MainStreet of Fremont will host its third annual Summer Fest this Saturday.

The Nebraska Pinto Horse Association will host its Hot Spots “Beat the Heat” Pinto Show at Christensen Field this Saturday.

Read about the latest news from the Fremont Area Association of Retired School Personnel.

Methodist Fremont Health will offer reduced cost wellness blood profiles, open to anyone in the community, from 7-9 a.m. Tuesday, Aug. 3, on t…

Hy-Vee, Inc. announced the launch of Wall to Wall Wine and Spirits, a new division of the company focused on providing a best-in-class wine, s…

The Fremont-Waterloo York Rite Masons, made up of lodges throughout the Omaha area, organized a free lunch for Methodist Fremont Health staff on Saturday at the Masonic Eastern Star Home for Children.