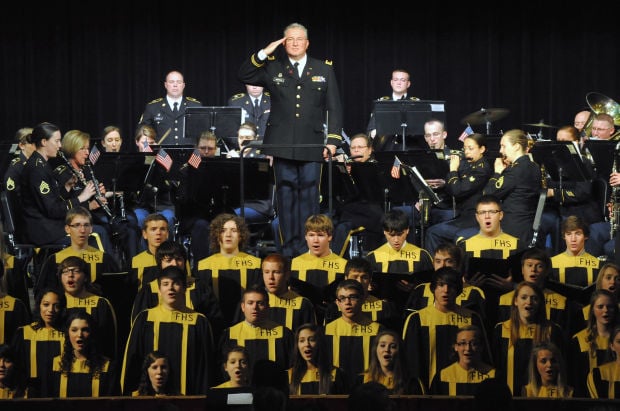 Chief Warrant Officer Brian Anderson, Commander of the 43rd Army Band, salutes during “Anchors Aweigh” during a past performance. The band will perform a concert Sunday at Fremont High School. 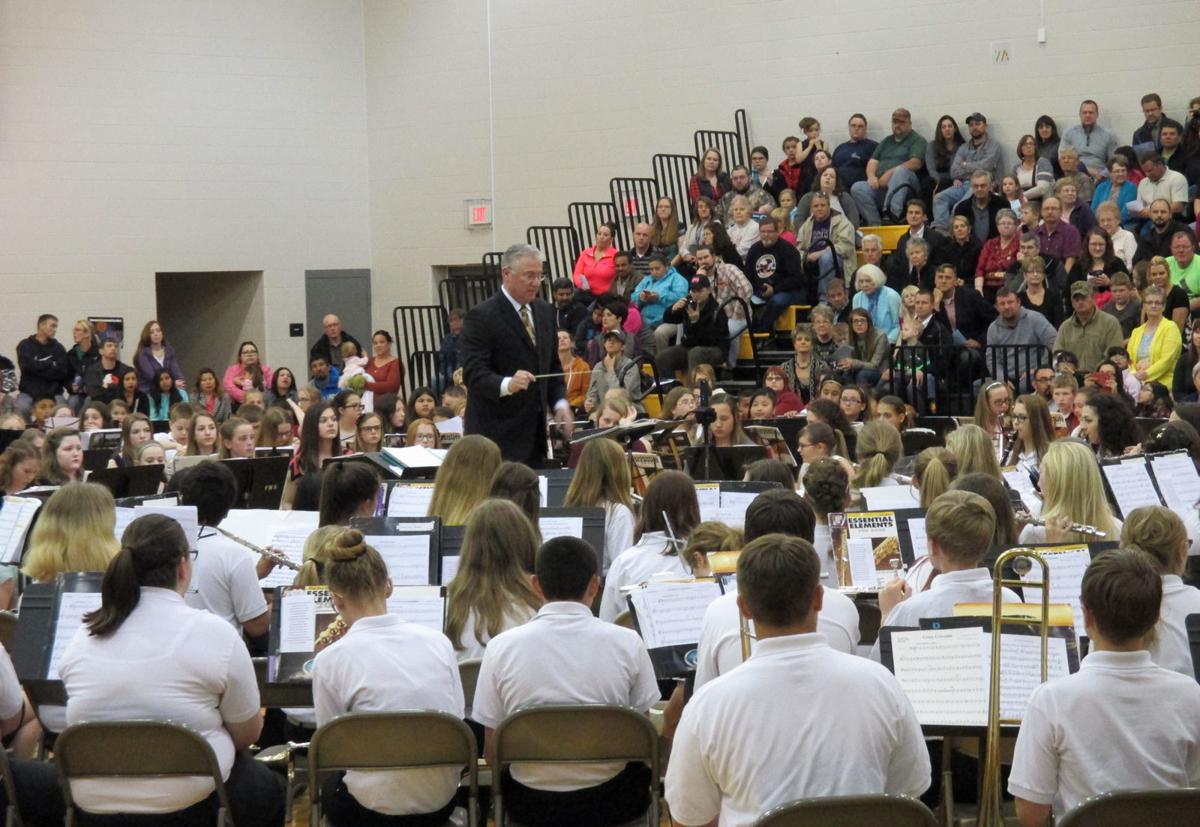 Brian Anderson conducts during a previous concert held inside of Fremont Middle School.

Chief Warrant Officer Brian Anderson, Commander of the 43rd Army Band, salutes during “Anchors Aweigh” during a past performance. The band will perform a concert Sunday at Fremont High School.

Brian Anderson conducts during a previous concert held inside of Fremont Middle School.

Whether it was one of his former students at Fremont High School, fellow teachers or members of the 43rd Army Band of the Nebraska National Guard, everyone said they remembered Brian Anderson for two things.

They remembered him for his sense of humor, but also his passion for seeing his students and everyone around him be the best they could.

“He challenged me to be a better band director, a better musician, not only through what he would say to me but also by what he did on the podium or what he would say in visiting with us and other people,” said Eric Fahrlander, first sergeant of the 43rd Army Band. “He was a great model for music educators and was taken too soon.”

Anderson, who graduated from Hastings College in 1983, also taught in Milford and Albion and was inducted into the Nebraska Music Education Association Music Educators Hall of Fame two weeks ago.

Joe Sajevic, executive director of the Fremont Public Schools Foundation, was principal of FHS from 2001 to 2012. He said during his time at FHS, Anderson always connected with the students he taught.

“He was empathetic and compassionate, yet he did a great job of holding the kids accountable,” he said. “And he always got the best out his kids and put together a really class-A, first-class band and performance.”

Sajevic said he remembers Anderson for his sense of humor, which he said would lighten up the room.

“He was one of the teachers that truly understood the students that he had,” he said. “And by doing so, he always managed to get the best out of each of the students, which made for a great situation for performances as well as just learning about music.”

With Anderson’s passing, Sajevic said he’ll miss his time spent with him.

“He influenced a lot of his students to continue education in the music field, which speaks volumes about his influence, many of which elected to become music educators in their own right,” he said. “And at the very least, every student that he had had a true appreciation for music in general and the effort that it took to put together a good product.”

Sarah Hokamp, a senior music education major at Doane University, graduated from FHS in 2015. She was involved in all things music: band, jazz band, orchestra, choir and chorale.

Hokamp, who played both the saxophone and violin from elementary school to her graduation, learned from Anderson in both band and orchestra.

“He was just a teacher with really high expectations and someone that pushed his students to do things they didn’t know they were ready for,” she said. “But it was all because he knew that that’s what we needed to do and what needed to be done in order for us to be a better band and musicians.

While she said she learned perseverance from Anderson, Hokamp said she also learned the importance of humor and remembered his jokes during class.

“He would always do ‘Uncle Dr. A’s Storytime’ when he would tell this crazy story and then somehow relate it back to what we were working on in class,” she said.

Hokamp said she also remembered Anderson reading from a redneck joke book and performing a “money dance” after a student left a folder out.

“He would get $2 from the student and do a money dance with it,” she said. “So it was just things like that, the little things that add up to big memories.”

Anderson’s love for his students even extended beyond the classroom, Hokamp said.

“When I’ve been in ensembles in college, he’s come out to those before, and I just think that’s pretty incredible and kind of rare for a teacher,” she said.

Hokamp, who will graduate later this month, is student teaching at Moore Middle School in Lincoln and will start substitute music teaching at elementary schools next semester.

“Even just in high school, him knowing that I was ready to try these new things and to play and perform harder music, him pushing me to do that has really helped my mindset in college to help me get through all of that,” she said. “And then just his relationship with his students is something that I would hope to have with my students someday, just being able to joke around and still learn a lot about music and have a really great time doing it.”

Fahrlander, who played tuba in the 43rd Army Band, said he remembers his time with Anderson, a relationship that lasted more than 30 years.

“Outside of the D.C. bands, we’re the most-respected National Guard band in the country with the awards we’ve received, and that’s due to him,” he said. “But he also had so many great students go through his program, so many people that he impacted through his public education as well. It’s just really sad to know that he’s gone.”

Fahrlander said Anderson was knowledgeable, outgoing, but above all, observant.

“He would meet people, he would talk with them, and then the next time he would see them, it could be three years later, he would know what the person’s name was,” he said. “An incredible skill.”

When former commander Jeff Klintberg stepped down from his position, Fahrlander said Anderson was the natural choice for his replacement.

“The band was already good when Brian took over the reins, but it just continued to go up,” he said. “He was able to refine it even more and push the band even more than where we were previously.”

Fahrlander said he would constantly take teaching ideas from Anderson, which he said was all part of being a band director.

“There were times when myself and other directors who are in the guard band would even come to him and say, ‘Hey, I’m working on my piece with this group, what do you think about this?’” he said.

During the band’s annual training, Anderson would sometimes have a day or two where he would hold an hourlong session with young directors in the band to rehearse music.

“He would kind of give them a master class and give them some pointers of, ‘Hey, you did this really well. I like how you do this. Now maybe, what do you think about this?’” Fahrlander said. “So he was always educating on the podium.”

Fahrlander said Anderson was a great model for the music educators in the 43rd Army Band.

“There’s just a lot of history we had, so I’m going to miss visiting with my friend just on normal things,” Fahrlander said.

Mark Harman, vocal music director at FHS, said Anderson attended his wedding and was the one to tell him that a job may be opening at the school. They spent 15 years working together since he took the position in 2001.

Harman said the students felt important around Anderson, as he desired to help them grow.

“Every decision, every concept, everything he ever did, he did with the idea that he was trying to be the best teacher for every kid in the room,” he said.

Harman said not only was Anderson an incredible music educator, but wanted to see him one as well, offering him advice from time to time during office visits or lunch together.

“My fondest memory is just knowing that 100 feet down the hallway, I had my best friend,” he said. “And knowing I got to walk down the hallway and sit in his office everyday makes me as profoundly lucky as you could possibly imagine.”

Harman said he believes he was truly fortunate to work with the best music educator in the state with Anderson at the school.

“He’s the single biggest influence, musically, in my life, ever,” he said. “I’ve never had anybody who came close to the impact he had on me as a musician.”

Anne Sorensen-Wang hopes area residents will attend an event that features holiday music, while benefiting a couple of good causes.