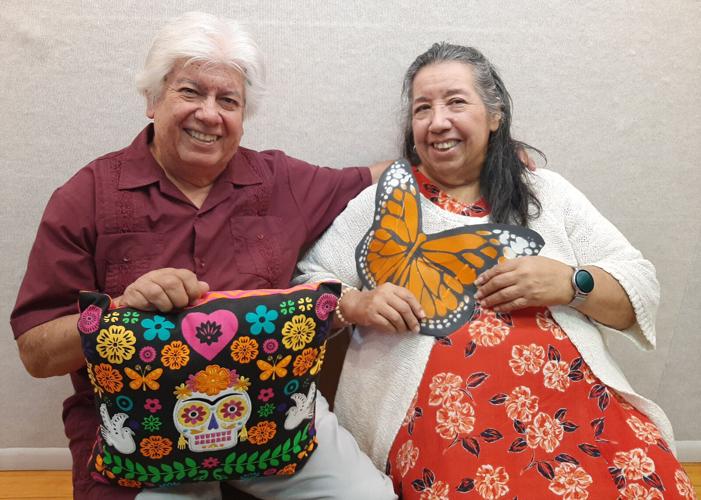 Jose and Linda Garcia show a Day of the Dead design on a pillow and a Monarch butterfly, both of which have significance in the Mexican culture. The Omaha couple plan to install an exhibit of works by about 20 artists for "Day of the Dead (Dia de Muertos)" in Gallery 92 West, downtown. The show will be on view in October. 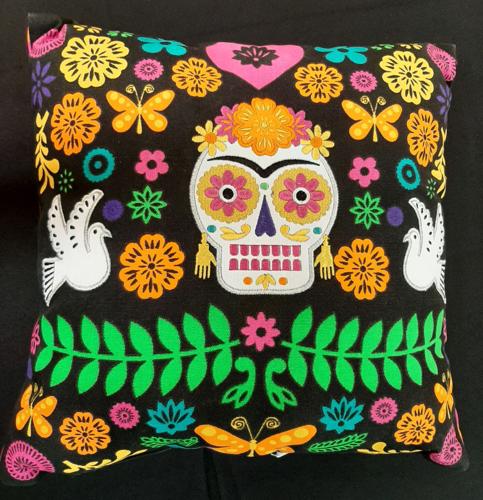 This colorful pillow features a Day of the Dead theme.

When it comes to education, Linda Garcia shares a phrase her grandmother used:

“You can always tell who the very educated people are, because they are the ones willing to share their knowledge.”

Now, the Omaha woman and her husband, Jose, are bringing their knowledge of the Mexican traditions of Day of the Dead and memory tables to the Fremont Area Art Association.

The Garcias plan to install the show called, “Day of the Dead (Dia de Muertos),” on Sept. 25. The show will feature a variety of artists’ works including sculptures, paintings, collages and the Garcias’ memory tables.

On Oct. 7, the public is invited to an opening reception for the exhibit from 5-7 p.m., in the Barbara Tellatin Gallery of the FAAA building, 92 W. Sixth St. Gallery admission is free and the exhibit scheduled to run through Nov. 2.

Beforehand, the public is invited to bring print copies of photos of deceased loved ones and/or pets to the FAAA for a community memory table as part of the show. Participants need to put the deceased person’s name, along with their own name on the back of each photo.

The Garcias said The Day of the Dead is a time to remember and celebrate the lives of ancestors, loved ones and even celebrities with dignity.

The theme of the FAAA show is “Ofrendas de Corazon (Memories of the Heart).”

They describe Ofrendas as memory tables, a presentation built in a home and more recently in public places, which includes flowers, photos and favorite items of the deceased person. If that person was a child, it might include toys. If it was a woman, it might feature one of her favorite dresses or jewelry.

Explaining the tradition, Jose said a memory table is laid out to have the soul being remembered feel comfortable, wanted and invited.

“The memory table is like a magnet that entices the spirit to feel at home among their own people,” Jose said.

Like Day of the Dead, the memory tables are a celebration of the person’s life, not their death.

Jose said before the Spaniards came to Mexico, the days of remembering the dead lasted for 20 days.

In the United States, Garcia said the “Day of the Dead” is almost like a civic celebration.

Linda cites a Mexican proverb that states there are three deaths: When a person dies; when their body is no longer seen (they’re buried or cremated); and – the worst – when the person’s name is no longer said and they’re no longer remembered.

“The whole principle of this is to keep the memory of your friends and ancestors alive,” Jose said.

Linda compares a memory table to a little display someone might have in their home, where they have a photo of a deceased grandpa, along with his pipe and hat.

“People have Ofrendas in their homes and don’t even realize it,” Linda said.

Self-Help & Art in California, which started in the 1970s, brought the Day of the Dead to the United States using images popularized by political cartoonist and printmaker Jose Guadalupe Posada (1852-1913).

Posada used skulls as a source of satire.

“One of the satirical things he did was to make fun of the rich,” Jose said.

Posada’s iconic image of a skeleton woman with a hat, called La Catrina, has become a common image in Day of the Death celebrations.

Linda said Posada’s message was that – whether poor or rich – everyone is going to die.

Day of the Dead depictions include skeletons and skulls, but not blood and gore. They’re not meant to produce terror or fright.

Linda also said Monarch butterflies, another important symbol, travel from Mexico to Canada and back again.

“They always return from their flight about the time of the Day of the Dead,” she said.

Legend has it that a person’s spirit and memories are being brought back to Mexico, too.

“It also represents migration for people who have moved from Mexico, it’s a reminder of their home,” she said.

Jose believes Day of the Dead allows people to let go of the grief and turn it into a nourishing memory.

The Garcias hope the public will come to the exhibit.

“It’s a way to learn more about another culture,” Jose said.

Besides the exhibit, area residents will have another educational opportunity when the Garcias and guest artist David Manzarnes share their knowledge of “Day of the Dead” during the Third Thursday Luncheon. This event starts at 11:30 a.m. Oct. 20 in Gallery 92 West, (the FAAA building). Cost is $15 for the lunch with reservations requested by Oct. 17.

Linda also plans to host classes involving this art form. Those interested are encouraged to watch the art association’s website for more information.

For more than 35 years, Linda – an artist, art instructor and storyteller – has been creating, teaching and exhibiting Latino arts, culture and stories throughout the state. She has assisted numerous schools with displays for Cinco de Mayo, National Hispanic Heritage Month and other events.

She and Jose are on the speakers’ bureau for the Nebraska Humanities Council. Jose, a Vietnam veteran, is a lecturer, freelance photographer and writer. He is a former director of the Chicano Awareness Center, retired officer of the Union Pacific Railroad and longtime community leader.

The Garcias are co-founders of the Mexican American Historical Society of the Midlands.

FAAA gallery hours are 1-4 p.m., Tuesdays-Sundays. More information about the art association is available at: 92west.org

After the success of last year’s event, local residents are preparing for the 2022 Fremont Hispanic Festival.

Teens learn much through showing horses

Gracie Thomas has a tender bond with a horse named Bubba.

Two rural churches are combining polka music and a good cause this month.

Despite a flood and worldwide pandemic, Tera Kucera stood at the fulfilment of a dream on Thursday afternoon.

Fremont-area calendar of events for Sept. 10-12

Methodist Physicians Clinic will be offering this year’s flu vaccine in Fremont and at three other area locations in an easy drive-thru format.

Susan Hicks did a lot of smiling on Monday when Care Corps’ LifeHouse received the gift of a van.

Midland University is honoring Sid Dillon with the 2022 Impact Award.

A new Clarmar Elementary School will be built southeast of the intersection of Luther Road and East 23rd Street in Fremont.

No one injured in house fire

No one was injured in a Tuesday morning fire at 505 W. Fifth St., in Fremont.

Looking for something to do this weekend? Read through our entertainment calendar for a variety of options.

Sunday is a big day at Camp Fontanelle.

It’s a program with the potential to save lives.

Jose and Linda Garcia show a Day of the Dead design on a pillow and a Monarch butterfly, both of which have significance in the Mexican culture. The Omaha couple plan to install an exhibit of works by about 20 artists for "Day of the Dead (Dia de Muertos)" in Gallery 92 West, downtown. The show will be on view in October.

This colorful pillow features a Day of the Dead theme.