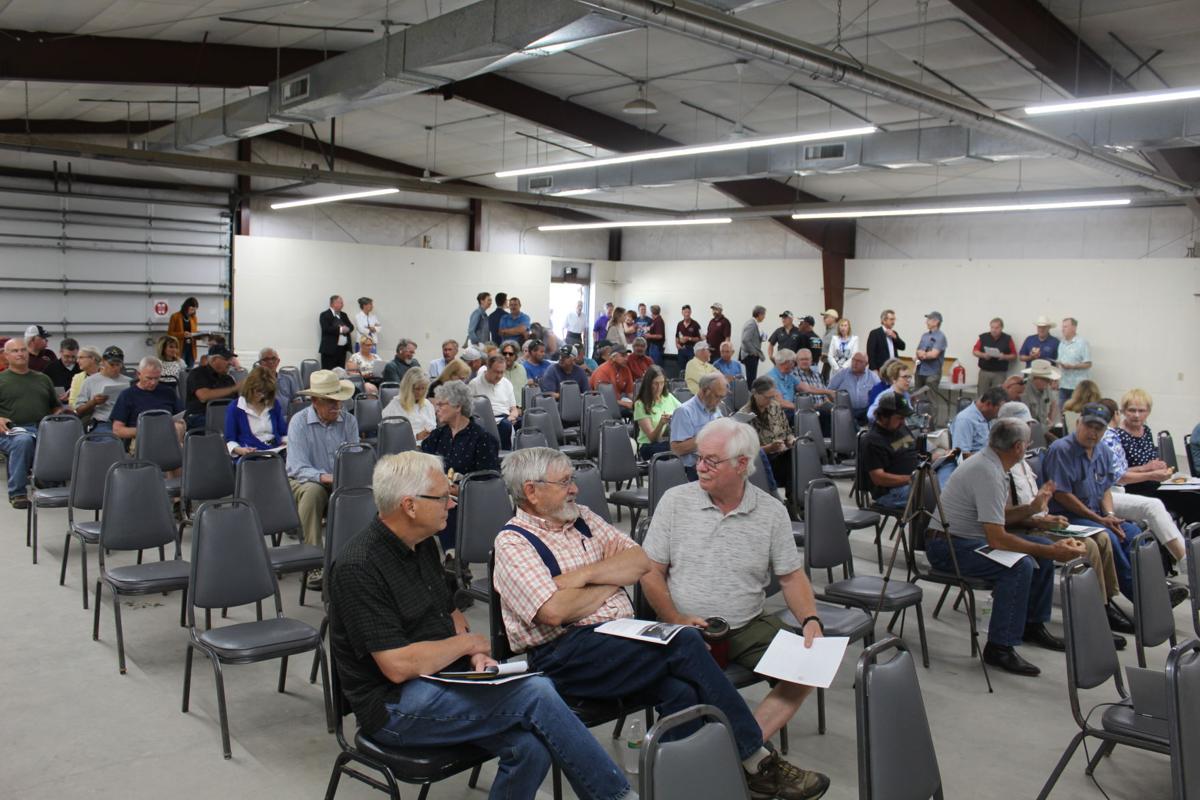 Monday morning's meeting in Wahoo brought in over 100 residents. 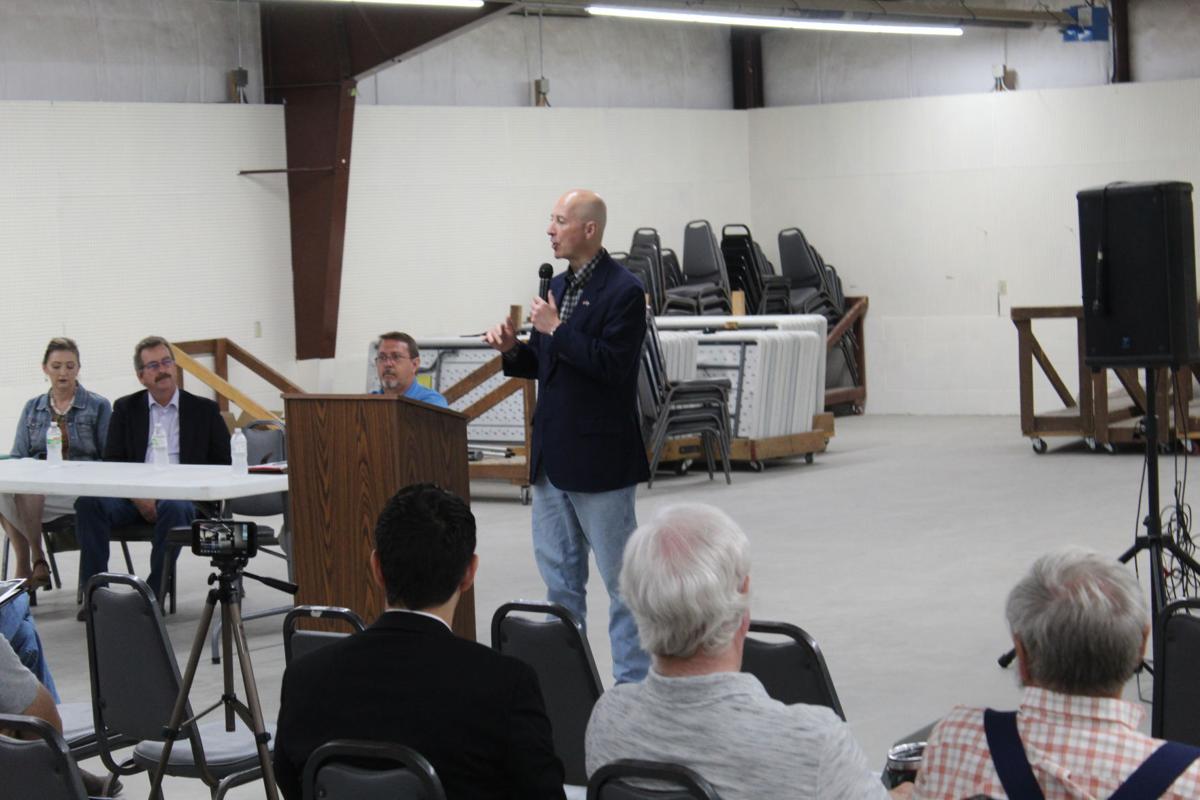 In a packed meeting hall located inside the Saunders County Fairgrounds in Wahoo, Governor Pete Ricketts continued to push against a Biden Administration goal that aims to conserve a large portion of U.S. land by 2030. 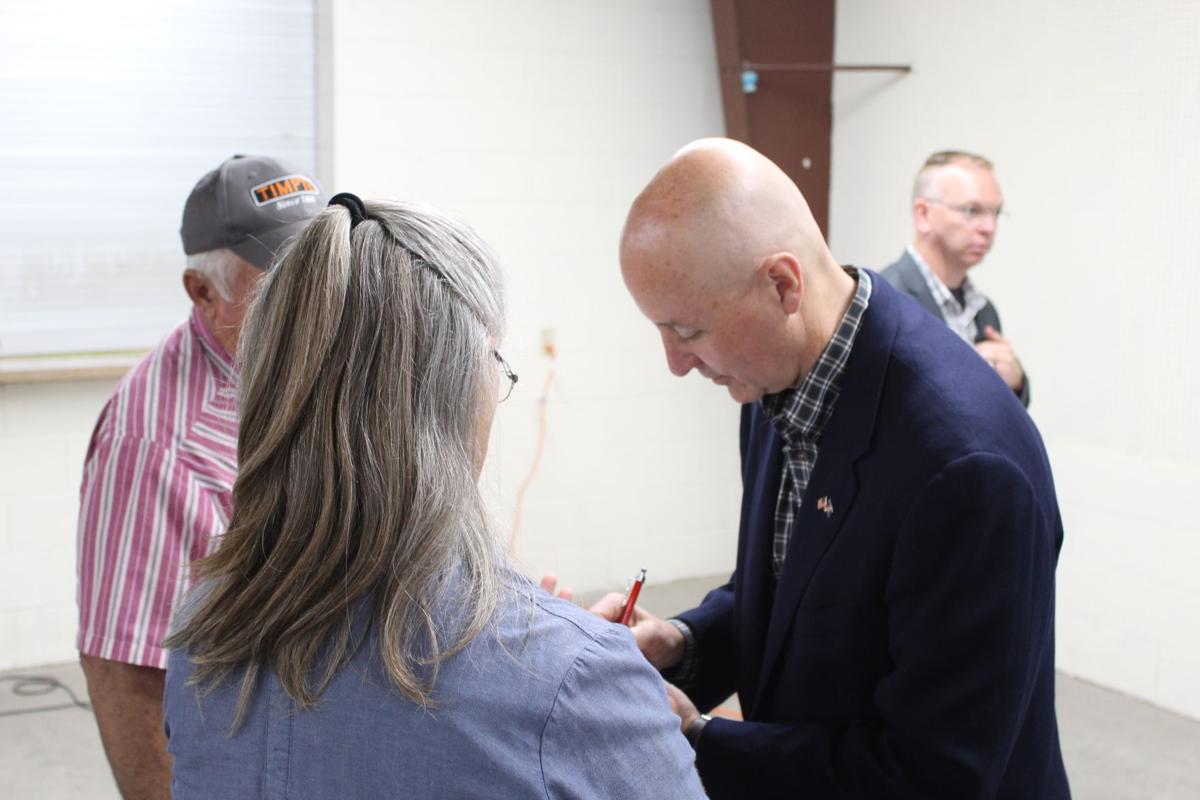 The Monday morning town hall was the latest in a series of stops Ricketts has made across the state to voice his opposition toward the Biden Administration's conservation plan.

In a packed meeting hall inside the Saunders County Fairgrounds in Wahoo, Governor Pete Ricketts pushed against a Biden Administration goal that aims to conserve a large portion of U.S. land by 2030.

The Monday morning town hall was the latest in a series of stops Ricketts has made across the state to voice his opposition toward the Biden Administration’s conservation plan. Ricketts previously made stops in Clay Center, Norfolk and Broken Bow and will visit Alliance on Tuesday.

Monday morning’s meeting in Wahoo brought in more than 100 residents. With seats filled, dozens of onlookers lined the walls of the hall as Ricketts, along with Nebraska State Sen. Bruce Bostelman and Cherry County Commissioner Tanya Storer, encouraged landowners and county officials to push against what Ricketts described as a “fight in our own backyard.”

“We’re in the trenches,” he said. “This is the front line about how it is going to happen. That’s why it is important for everybody to know what is going on.”

The Biden Administration unveiled the 30-by-30 plan in late January as part of Executive Order 14008, referred to as Tackling the Climate Crisis at Home and Abroad. The order aims to conserve at least 30% of the nation’s lands and waters by 2030.

The fight to oppose the plan has found roots in Nebraska. Almost two dozen counties — the most in one state — have adopted resolutions to block the plan.

Ricketts’ concerns regarding the plan stem from what he believed is a lack of detail regarding how the administration plans to accomplish the plan, which would require an area twice as large as Texas to be preserved, during the next nine years.

“Part of the problem is that we’re not getting very much information about what the administration is proposing,” Ricketts said.

A May federal report titled, “Conserving and Restoring America the Beautiful,” provided a preliminary report on the plan, saying it served as a “starting point” to achieving the Biden Administration’s goal.

The report also gave an early glimpse at potential efforts that may be taken to reach the administration’s goal by 2030.

Ricketts clung to the vagaries of the plan as it stands in its early stages, encouraging landowners to “read the fine print” when potentially entering into conservation easements with the federal government or other land set-aside contracts.

Ricketts said he isn’t against the practice of conservation easements in general, but was vocal in his opposition toward permanent easement contracts.

“I’m 100% against a permanent conservation (easement), because that means the land can never be developed.”

During the town hall, Ricketts also warned about the potential of added property tax burdens for private landowners should the state see its private land shift to federal control.

Ricketts said 97% of all property in Nebraska is in private hands.

He often referred to the administration’s plan as a “land grab” during the town hall.

During previous calls with reporters, U.S. Secretary of Agriculture Tom Vilsack said the initiative is not a land grab.

The May preliminary report specifically states that it will honor the private property rights and support the “voluntary stewardship efforts of private landowners and fishers.”

“President Biden has recognized and honored the leadership role that farmers, ranchers, forest owners, and fishers already play in the conservation of the nation’s lands, waters and wildlife, and has made clear that his administration will support voluntary stewardship efforts that are already underway across the country’s lands and waters,” the report stated. “This commitment includes a clear recognition that maintaining ranching in the West — on both public lands and private lands — is essential to maintaining the health of wildlife, the prosperity of local economies, and an important and proud way of life.”

Alan Meyer, a Saunders County resident who lives near Cedar Bluffs, spoke in favor of the initiative during the Monday town hall. He pointed specifically to the May preliminary report, noting that the plan is a goal rather than a mandate and that private property rights would be “honored and sustained.”

“I am really tired of opposition to proposals or programs primarily because they come from the other party,” he told Ricketts. “With that in mind, my suggestion is that you view this as an opportunity instead of a threat.”

Rather than focusing on what he described as a “fear mongering” campaign, Meyer implored Ricketts to use his time and energy to utilize the Legislature to ensure that the initiative benefits Nebraskans.

“As a governor in a deeply Republican state, you actually can wield a lot of leverage in what the final result will be,” he said. “And if you don’t like the final result, then you can tell us so with concrete examples instead of wild speculation.”

Ricketts defended his efforts to visit Nebraska communities to discuss the initiative. Given the amount of land necessary to reach the goal by 2030 and the percentage of private land in Nebraska, Ricketts said the Biden administration needs to disseminate more information to state leaders.

In April, Ricketts responded to Biden’s proposal by joining 14 other governors in submitting a letter that warned of potential private property rights violations and could hurt the economy of rural states.

“When you’re talking about trying to do something equivalent to the size of Nebraska every year for the next nine years, that’s a lot of land,” he said. “How are you going to do it? The Biden Administration has given us no clue.”

While talking with reporters following the town hall, Ricketts said his biggest fear regarding the initiative is the lack of a concrete plan to achieve the goal.

“When the federal government says they’ve got a huge, grandiose plan to put land twice the size of Texas into conservation and don’t tell you what that means, that’s very concerning,” he said. “We do need to watch what’s going on on a local level and we do need to watch any sort of federal legislation, because the president doesn’t have the constitutional authority to do this. He will have to work through Congress to enact anything at the federal level or work at the local level, which is what we’re educating people about here today.”

Calendar of events for June 9-11

Find out more about this week's Concert in the Park, a special Fremont City Council and Planning Commission meeting, and what's on the schedule at Fremont Eagles Club.

Work to begin on the Western Douglas County Trail in Valley

Weather permitting, work will begin June 14 on the Western Douglas County Trail. There will be various lane and road closures along 270th Stre…

Holly Strudthoff's 16-year tenure as an educator at Trinity Lutheran has helped prepare her to become the school's new director, but her ties …

Water value to be replaced on Wednesday

The Fremont Water Department will be replacing a water valve on Wednesday, June 9.

Watch Now: Should my kid get the COVID vaccine?

Monday morning's meeting in Wahoo brought in over 100 residents.

In a packed meeting hall located inside the Saunders County Fairgrounds in Wahoo, Governor Pete Ricketts continued to push against a Biden Administration goal that aims to conserve a large portion of U.S. land by 2030.

The Monday morning town hall was the latest in a series of stops Ricketts has made across the state to voice his opposition toward the Biden Administration's conservation plan.