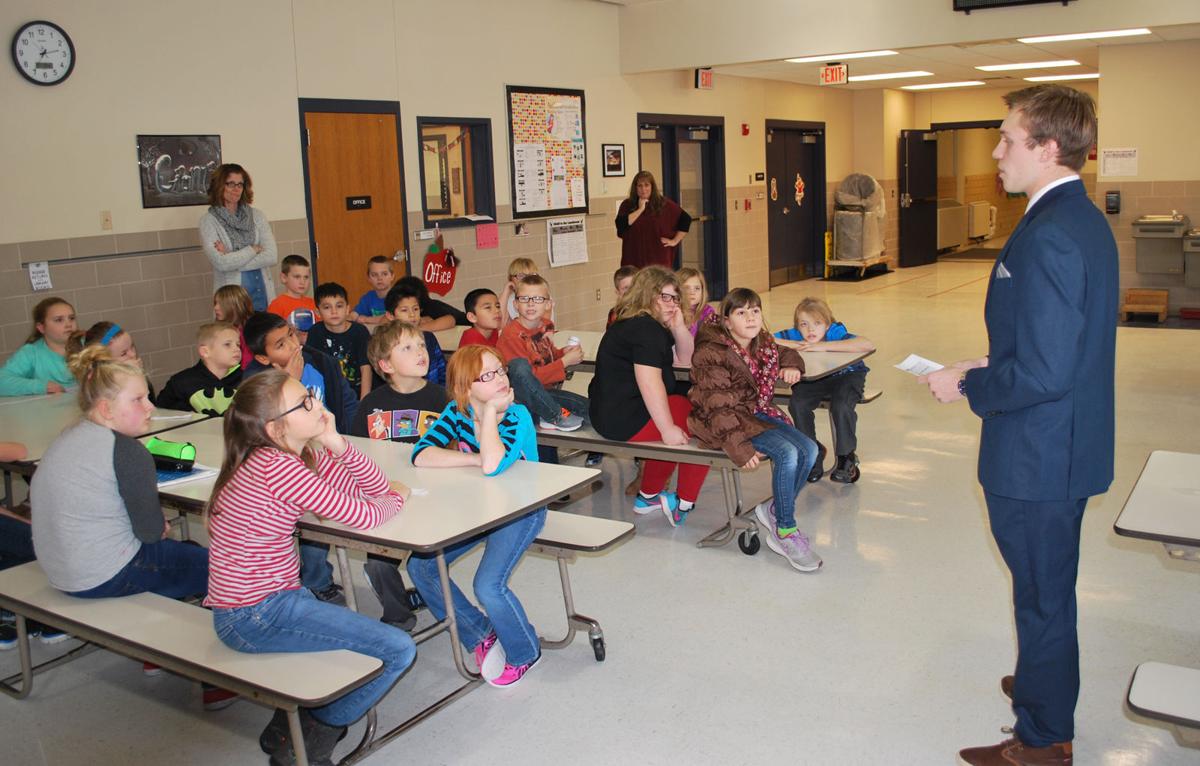 Grant Elementary students and staff look on Tuesday afternoon as Fremont City Councilman Matt Bechtel explains his job as a member of the City Council, as well as the path he took to get elected at 22 years old. 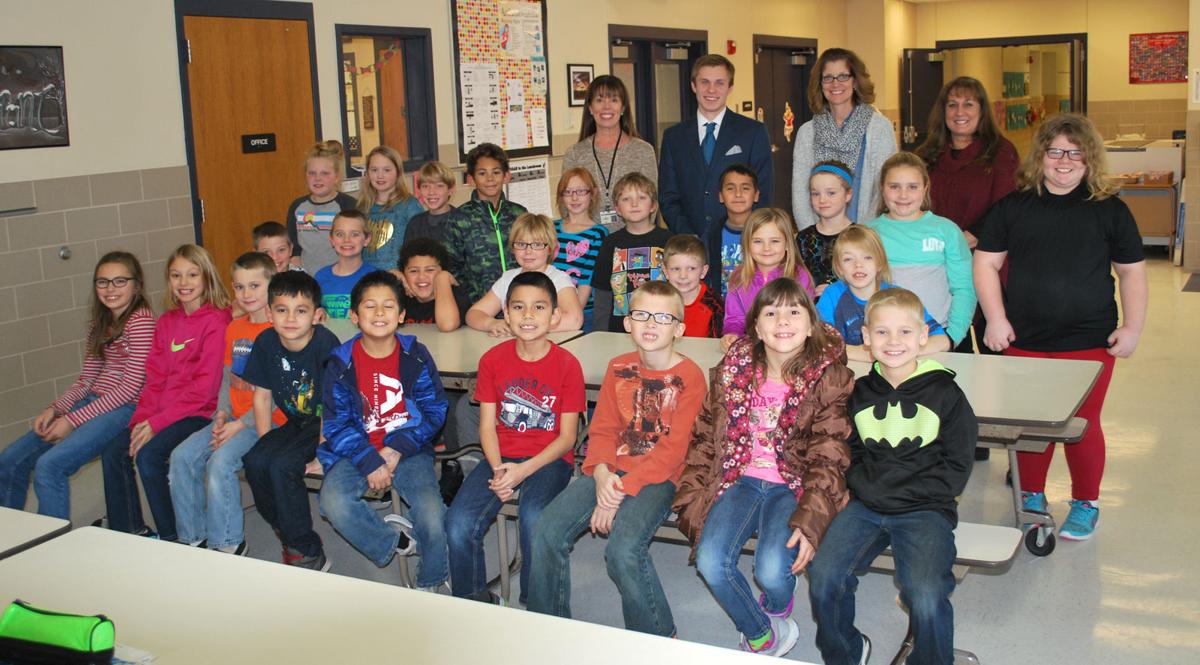 Students comprising two Grant Elementary third-grade classes take a picture Monday afternoon with Fremont City Councilman Matt Bechtel inside of the school’s cafeteria. Bechtel spent 30 minutes speaking with students about his role with the Council, and the path he took to reach his goal.

Fremont City Councilman Matt Bechtel’s interest in the political spectrum started much earlier than your average person’s. While some people gravitate toward politics as they enter high school, college or the workforce, the newly-elected 22-year-old Fremont High School graduate started studying political figures when he was a student at Grant Elementary.

“When I was your age I was already really into politics,” Bechtel said Monday afternoon as he addressed a group of Grant third-graders inside of the school’s cafeteria. “I had this president book that I would read all the time, and I would ask Mrs. (Angie) Gross questions about Ronald Reagan, and stuff. I’m not sure if she remembers that, but I certainly do.”

Bechtel spent around 30 minutes Monday speaking with Grant third-graders about chasing their dreams, what it means to be a member of Fremont’s City Council and what his role really is.

Perhaps more than anything, Bechtel’s message revolved around students chasing their dreams. Whether they have political aspirations or desires to pursue other avenues, he wanted them to know that they can do it, and that they should never view their age as a roadblock as they travel down life’s path.

He certainly never did, and that ultimately paid dividends when he was elected to take over one of the Council’s Ward 4 seats after defeating Jordan Paden in the Nov. 8 general election. The victory made him one of the youngest – if not the youngest – members to ever hold a Council seat in Fremont.

“I started going in when I was 16 to watch meetings, because I thought that it was pretty interesting,” Bechtel said. “… I’m only 22 now, so I’m still pretty young – I graduated from high school in 2012. And I really want you guys to remember that because you all can do whatever you want – your age doesn’t matter. If you want to make a difference you can do it, don’t wait for people to give you that opportunity, you can make a change right now if you really want to. If you believe in something strongly never be embarrassed.”

With that being said, though, Bechtel vividly remembers the stress and anxiety of getting his foot into the political door when he was 19 years old. After years of attending city council meetings, he started gaining local notoriety. He started receiving inquiries about when he was going to put his name on an election ballot.

So he did it, and learned a few valuable lessons along the way. He started going door to door, hitting hundreds of houses in his ward. He wanted to know who these people were and what he could do to help them. What they were happy about, what they were sad about and what changes they wanted to be made.

He took notes, he researched and more than anything, he really cared. Being a member of the city council isn’t a position he wanted for the money – which is more or less a glorified monthly stipend of $500. His full-time job consists of working for Eagle Distributing, Inc.

He allowed himself to believe that he could win, and he nearly did, falling to John Anderson in the general election by a mere 48 votes. Bechtel was devastated, but he learned a valuable lesson, a lesson teaching him that although he lost once, he would eventually come out on top.

Now keep in mind, explaining a political race to a group of third-graders is a bit of a challenge. To help them understand how hard it was to lose the 2014 race, he used an analogy equating his loss to when a child builds a Lego masterpiece only to have it broken or destroyed by a sibling.

“You know when it breaks and falls apart and you feel all sad?” he asked. “That’s how I felt, just kind of sad, like I had built something really nice and then it was broken. So I was really sad, but it was also cool because then I found out that I really did make a difference, which I didn’t realize right away.

“People would come up to me in public and tell me that they saw me do this, and it inspired them to take a chance or a risk. And that was really cool and I realized that I did help people out, I started becoming happy because it really wasn’t a total loss. So what I’m saying is that even if you try really hard for something and it doesn’t work out, you still have to be happy that you tried.”

Bechtel’s message appeared to resonate with students as they intently looked on during his speech. When he ended his presentation he asked if there were any questions. A multitude of small hands shot into the air.

He gladly answered questions to the best of his ability. Spending time with the students wasn’t a burden for Bechtel, but rather quite the opposite, enjoyable.

When Mrs. Gross introduced Bechtel to the students, she showed them his third-grade school picture. And as expected, he sure did look like a third-grade kid, with blond hair and a goofy smile spread across his face.

Maybe she wanted to show them that he was sitting in their same seat not that long ago, and that with some hard work, they can do what he’s done.

Maybe she was just happy to have a former student back.

But regardless, the school picture seemed fitting. Back when Bechtel had his class photo taken years ago, he had Council members fighting for his future, and he wants to do the same for students he spoke with.

Park board members disapprove of planned library move to auditorium

Tea Party meeting to focus on election audit and canvassing

WinItBack, TEA Party Patriots of Dodge County, will be meeting from 6:30-8:15 p.m. Thursday, Oct. 21, at Keene Memorial Library in Fremont.

Grant Elementary students and staff look on Tuesday afternoon as Fremont City Councilman Matt Bechtel explains his job as a member of the City Council, as well as the path he took to get elected at 22 years old.

Students comprising two Grant Elementary third-grade classes take a picture Monday afternoon with Fremont City Councilman Matt Bechtel inside of the school’s cafeteria. Bechtel spent 30 minutes speaking with students about his role with the Council, and the path he took to reach his goal. 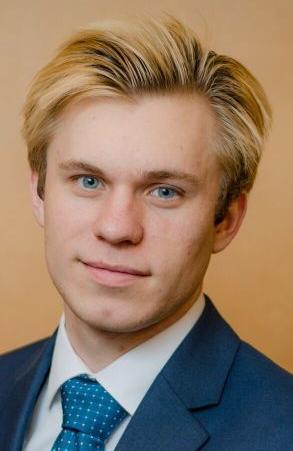 Fremont City Councilmember Matt Bechtel said he doesn’t plan on running for reelection for his Ward 4 seat in the 2020 general election.