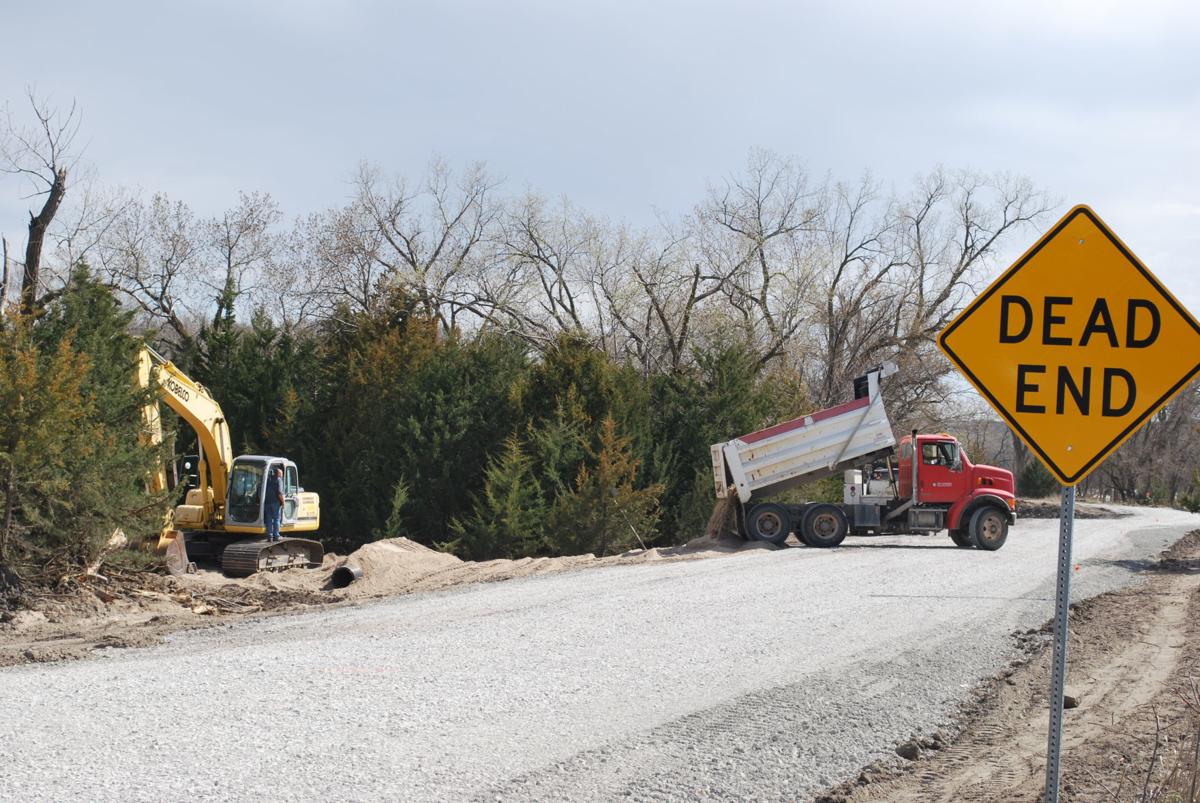 Crews work along County Road 19 near the west entrance of Fremont Lakes State Recreation Area in 2019. 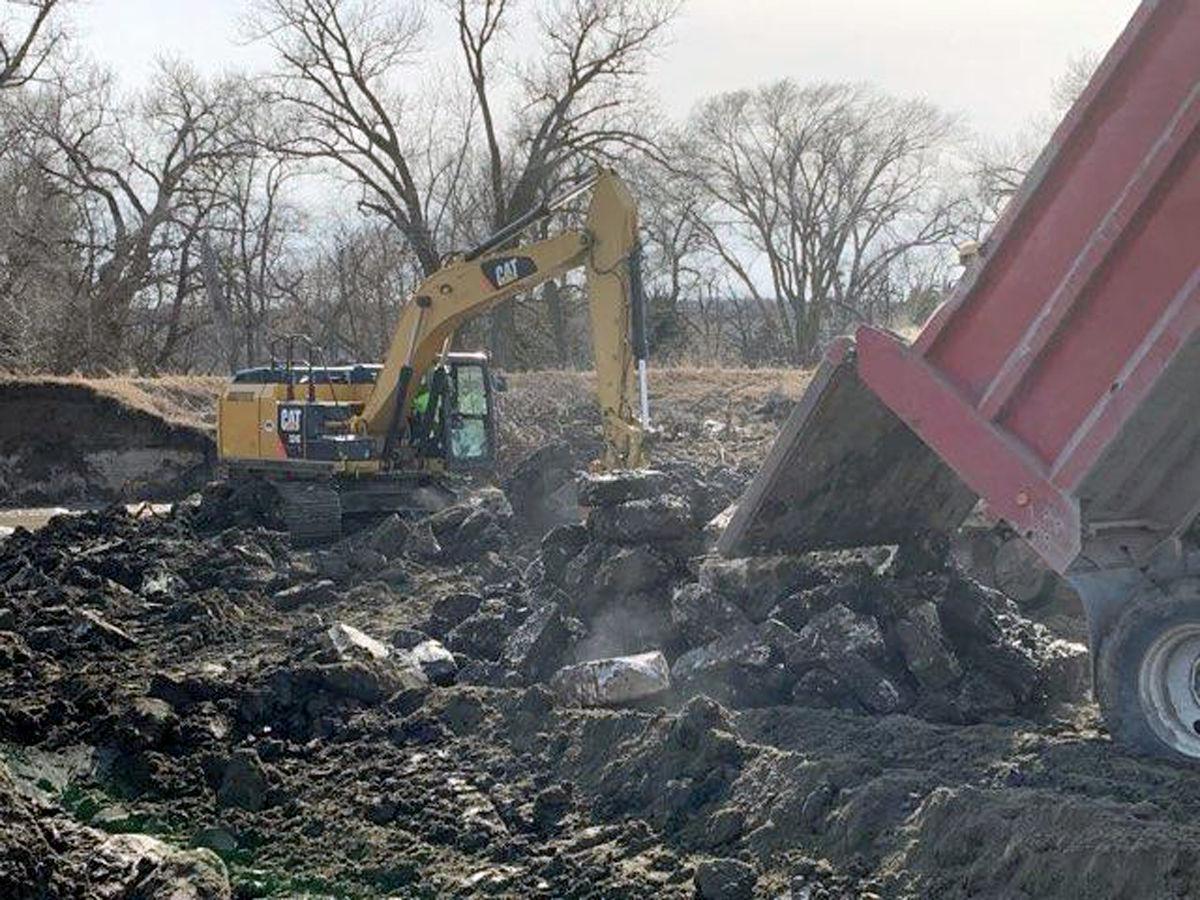 Crews work on a levee west of Fremont by county road 19, near the Rod and Gun Club.

When Platte River water swept away a chunk of County Road 19, by Bryson Airboat Tours in the Fremont Lakes State Recreation Area, it created a new channel that contributed significantly to flooding in the south part of Fremont between March 13 and 17, officials have said.

A team of contractors, led by Sawyer Construction, worked to plug the hole in County Road 19, according to a March 18 Tribune article. For days, trucks dumped tons of rock and rip rap into the breached channel from one side of the rope, while progress was hampered on the other side, where moving river water ate away at the embankment.

The project would ultimately succeed in stopping most of the water from flowing through, though officials say there is still a channel that is flowing underneath of the rock. Dodge County Highway Superintendent Scott Huppert said he doesn’t expect that to stop until other levees in the area are repaired, but work is done on County Road 19 for now.

“We’re done with it right now unless it moves anymore,” Huppert said. “I’m watching it all the time, it ain’t moved, it ain’t done any of that. It’s good. Just let it run through right now.”

That project alone will cost at least $988,189.56, according to an invoice from Sawyer Construction, submitted to Dodge County during the Board of Supervisors meeting on Wednesday.

And that number could still go up another $10,000 or so, Huppert said.

“That’s not all of it,” Huppert told the board. “(Sawyer Construction) submitted it now because his guys are needing to get paid.”

The invoice highlights some of the extreme monetary cost that last month’s flooding has left behind, forcing the county to find ways to free up money in the short term to pay for projects of immediate need, until state and federal disaster relief can reimburse most of the cost.

Huppert told the board on Monday that estimates to repair roads in the county had come in at about $4.3 million — much of which he will be seeking assistance from FEMA and the state of Nebraska. All told, this estimate was actually less than Huppert initially expected.

“It’s a little lower than I was estimating, I was estimating a little bit closer to six. But it could end up that much higher.”On Wednesday, the county officially established a “Flood Disaster Relief Fund of 2019,” with a public hearing to amend the 2018/2019 budget by transferring $4 million from the county’s interest fund and the improvement/economic development fund. That was a followup to a resolution that the board passed on March 27 to establish such a fund, and to apply for additional loans as needed. The board is expecting that 85.5 percent of the cost will be reimbursed through state and federal aid, but has said it could take years for that money to come through.

County officials acknowledged that the $4 million fund won’t cover all of the damages that the county will need to cover — roads and all. Dodge County Clerk Fred Mytty referred to the newly established fund as “seed money.”

“The expenses are more than $4 million,” said Board Chairman Bob Missel. “We’ll be looking at a bond issue going forward.”

The work along County Road 19 alone, for instance, will use up a nearly quarter-sized chunk of that new flood relief fund. Huppert indicated that he’d be applying for FEMA funds for reimbursement on the project, which he described as an “emergency protective measure.”

That said, both Huppert and Missel said that, given the man hours and sheer amount of rip rap used, the project had actually cost less than expected.

The project had come about at the request of the city of Fremont, after the city had identified the breach as a source of water coming into town.

“As it unfolded, it became clear that this was a huge priority to get this fixed,” Missel said.

The channel running through County Road 19 was likely around 25 feet deep, Huppert said.

Gov. Pete Ricketts encourages businesses to apply for the 2019 Governor’s Wellness Award before the application deadline on June 1.

Dodge County has put together an interlocal agreement, vowing to help its townships fund flood-damaged roads and bridges that will ultimately …

For the second year in a row, Fremont High School seniors will take a ceremonial walk through an elementary school of their choice — decked ou…

Crews work along County Road 19 near the west entrance of Fremont Lakes State Recreation Area in 2019.

Crews work on a levee west of Fremont by county road 19, near the Rod and Gun Club.