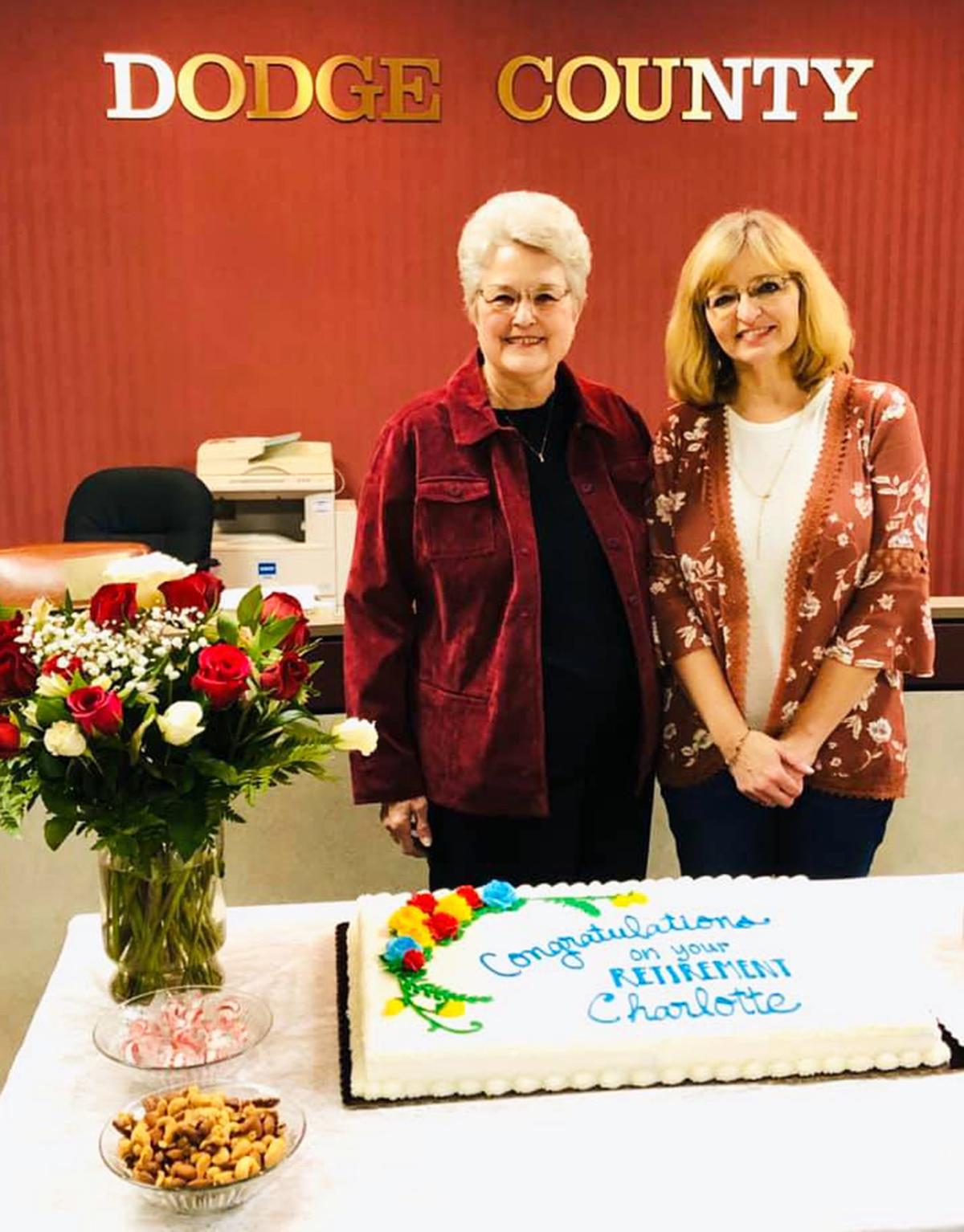 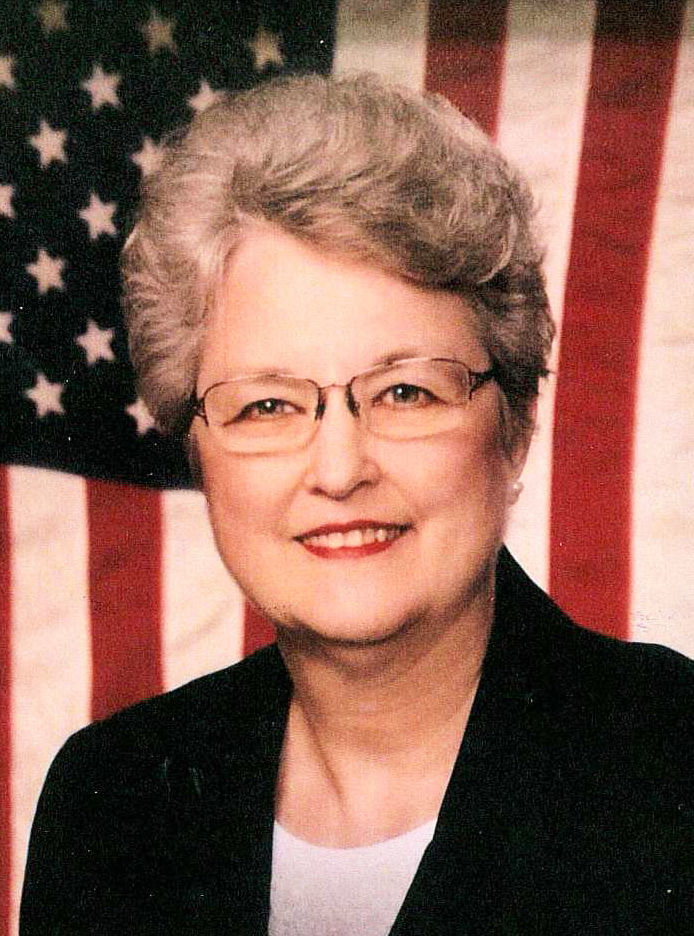 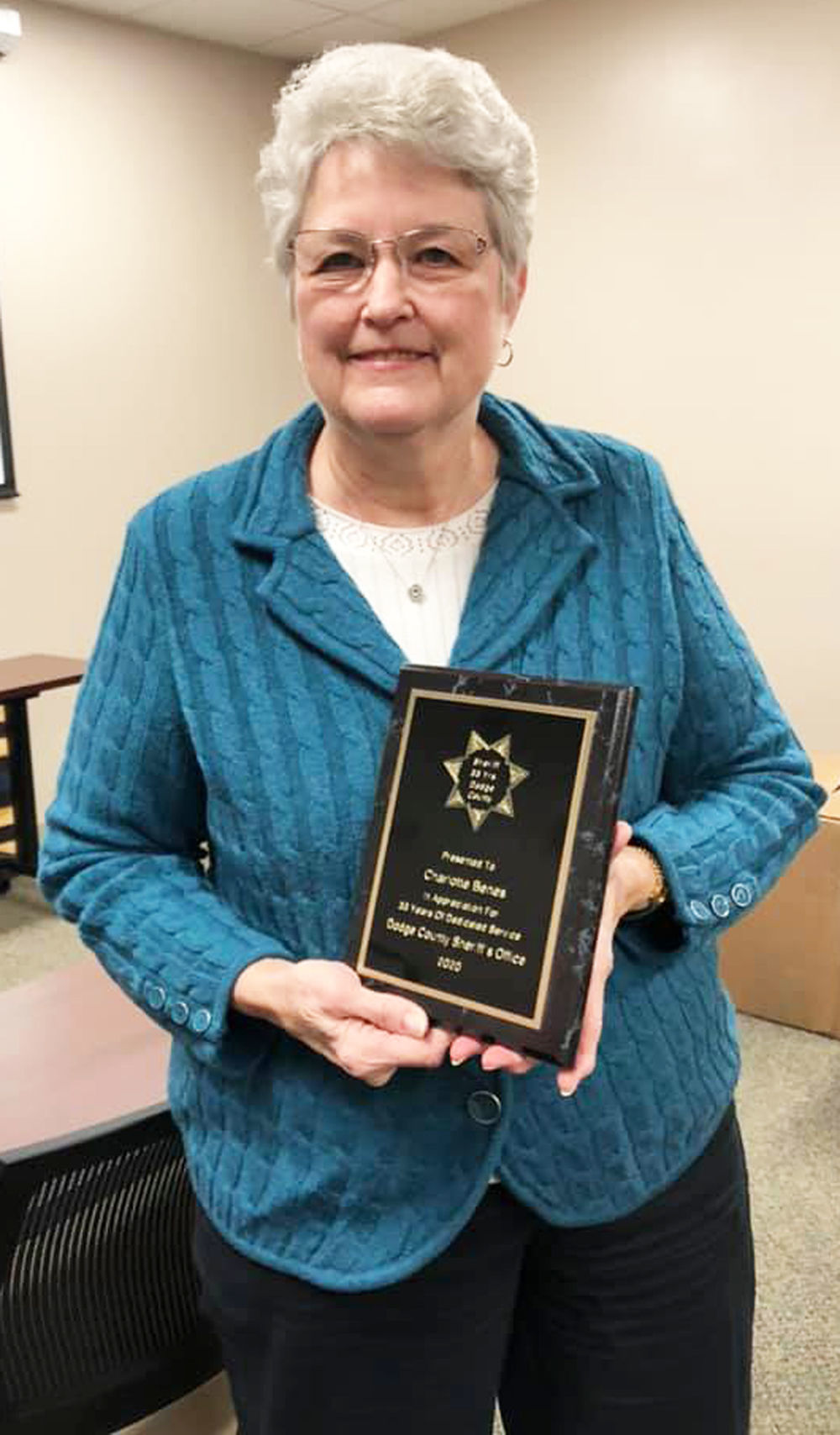 Charlotte Benes is shown with a plaque. The Fremont woman recently retired after working more than 33 years as a clerk-typist in the Dodge County Sheriff's Department. 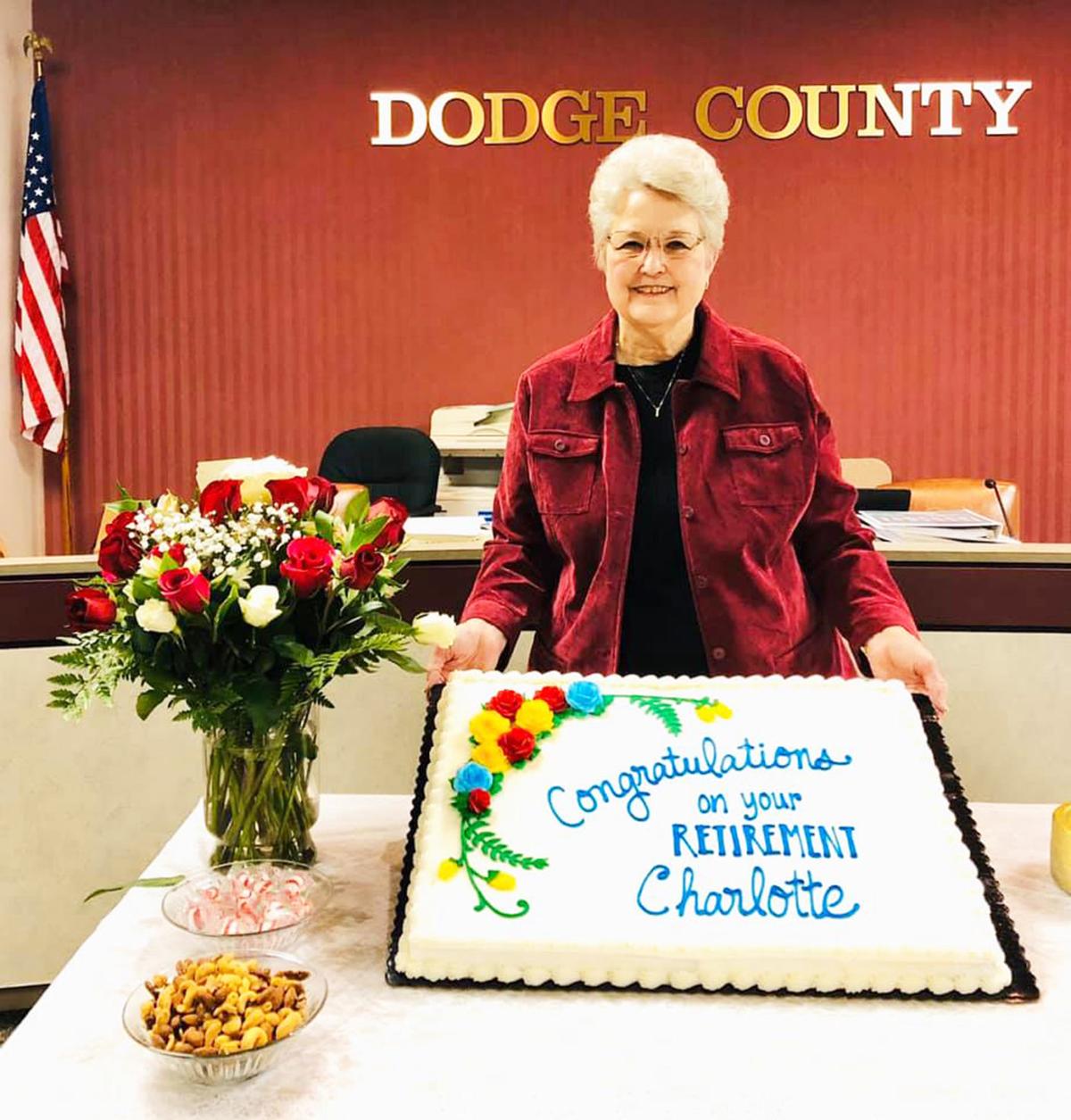 Charlotte Benes stands near a cake and flowers she received during a retirement party on Friday. She retired after working more than 33 in the Dodge County Sheriff's Department. Before that, she worked for three years in the Dodge County Assessor's Office.

Charlotte Benes is shown with a plaque. The Fremont woman recently retired after working more than 33 years as a clerk-typist in the Dodge County Sheriff's Department.

Charlotte Benes stands near a cake and flowers she received during a retirement party on Friday. She retired after working more than 33 in the Dodge County Sheriff's Department. Before that, she worked for three years in the Dodge County Assessor's Office.

Whether helping transport a female prisoner, letting someone know their gun permit was ready to pick up, or seeing the face of someone who’d lost a precious family member in an accident, Benes had a job that involved some uncommon circumstances.

Benes retired last week after working as a clerk/typist in the Dodge County Sheriff’s Department for 33 years. In her time there, Benes worked with three different sheriffs, more than 50 deputies and seven office personnel.

She’s seen technology evolve from dial phones to cell phones and from typewriters to three different computer programs. She remembers when the sheriff’s office was moved from the fourth floor of the courthouse to the judicial center.

“It has been a lifetime of experiences — many I’ll never forget,” Benes said. “I’ve made many new and lasting friendships that I will always cherish.”

A Wisner High School graduate, Benes went to Personnel Training Institute in Omaha and then to Washington, D.C., where she worked as a civil service worker (clerk-typist) for the U.S. Department of the Navy for three years.

She even had the unique role as queen after being crowned Miss Bu-Pers (Bureau of Naval Personnel).

“Your office tells you that you’re going to compete and I competed with 35 different girls,” she said.

There was no swimsuit competition, instead, contestants were judged by their personalities and gracefulness.

She was selected after interviews and her sister, LaRue, who’d earned that title the previous year, did the crowning honors.

She’d compete for the title of “Miss Navy,” but an ensign earned the title that year.

Later on, she’d return to Nebraska. She’d work at Wayne State College for several years before moving to Fremont, where she worked at Oil Gear.

In July 1983, she applied and then-Dodge County Assessor Olga Boock hired as a clerk-typist for that office.

“They needed help doing property evaluations,” she said. “It was an enjoyable office to work in, but when the computers were introduced, it eliminated my job.”

Then she learned about an opening in the Dodge County Sheriff’s Department and was hired in September 1986. She’d learn to process warrants, civil papers and certifications for title inspections.

Just to the right of the office was the jail.

“I remember a fellow coming off the elevator and he said he always had to come up and visit once in a while because he’d spent time in jail — and he didn’t want to come back,” she said. “That was always a reminder.”

She appreciated that the man was trying to improve himself.

She remembers, twice, when a pigeon flew in through an open sheriff’s office window. Years later — after the office was moved to the Dodge County Judicial Center — a bat made an appearance.

Her job would prove interesting in other ways.

Years ago, she’d serve as a matron and would help deputies transport female or juvenile prisoners. Most of the time, she’d sit in the cruiser’s front seat and, sometimes, in the back with the person being transported.

Each situation was different.

About midway through her career, she was helping transport a female, who had the possibility of vomiting.

Getting individuals such as this woman relocated rapidly was important.

“You went with (cruiser) lights on and you got there as quick as you could get,” she said.

They’d end up taking this prisoner to a mental health facility in Norfolk.

One time, she was helping transport a prisoner with Al Benes, who was a reserve officer.

They’d reached her hometown of Wisner, when Benes had to slow down for a man ready to step off the curb.

The man waited and the cruiser had passed by when she realized the man at the corner was her dad.

Her dad didn’t believe it, at first, when he learned his daughter was in that sheriff’s vehicle.

Charlotte and Al Benes actually met while transporting people to facilities in Geneva, Madison or Omaha.

They married in 2001 — 20 years after they’d started transporting prisoners.

“We had to make sure we knew each other,” she said, laughing as her husband smiled.

A time came when she’d no longer have to ride along on transports.

She recalls another change — when the sheriff’s office moved to the first floor of Dodge County Judicial Center. Security was tighter and she then worked behind a 2-inch thick glass window.

Benes has seen plenty of sadness during her career — times when a relative who’s lost a loved one in a traffic accident wants to talk to the sheriff. Or when someone had a missing child.

She remembers when a mother came to pick up her son, who’d been in a center in Geneva. The mom, who didn’t have a car, walked from the Fremont Mall area to the sheriff’s office — without any shoes.

Benes has had unusual times — like when she talked to a man, who wanted a title inspection, but didn’t have a title to the vehicle — which authorities would learn had been stolen.

She’s had rewarding times, when she’s been able to tell someone that their missing purse or wallet was found.

And she’s called people who were happy to learn their gun permit had been typed so they could pick up the gun at a shop.

Throughout the years, she’s enjoyed her co-workers and the opportunity to meet new people.

And if she had to do it all over again, Benes still would have worked there, because every day was different.

“We never had two days alike,” she said.

In the future, she and Al hope to do some traveling to Missouri, Arizona and California.

She was honored during a retirement party on Friday.

“Today, we celebrated what will be the end of an era,” said Linda Bendig, clerical supervisor. “Over her time here, she has blessed so many with her smile. We will miss her dearly, but we are excited for her next adventure! Congratulations Charlotte! There are not enough thank yous in the world to show our appreciation.”

Horses come through Fremont heading to polo in California

It was cold outside as Garrett Smith gently wrapped his arm around the neck of a brown Thoroughbred.