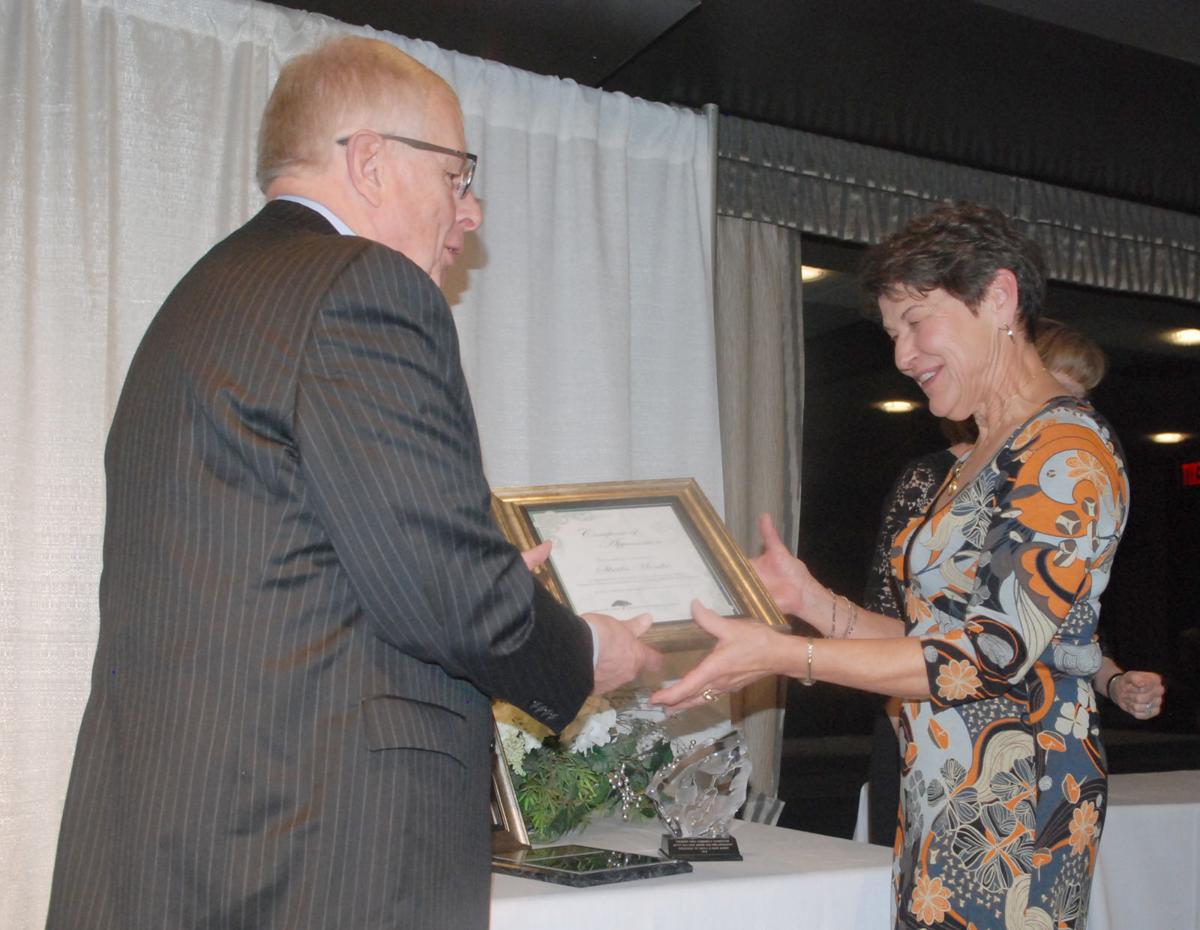 Terry McClain, left, vice president of the Fremont Area Community Foundation, presents a Certificate of Appreciation to Shelia Monke, who is retiring from the foundation's board of directors. The presentation was made at the FACF banquet on Tuesday night. 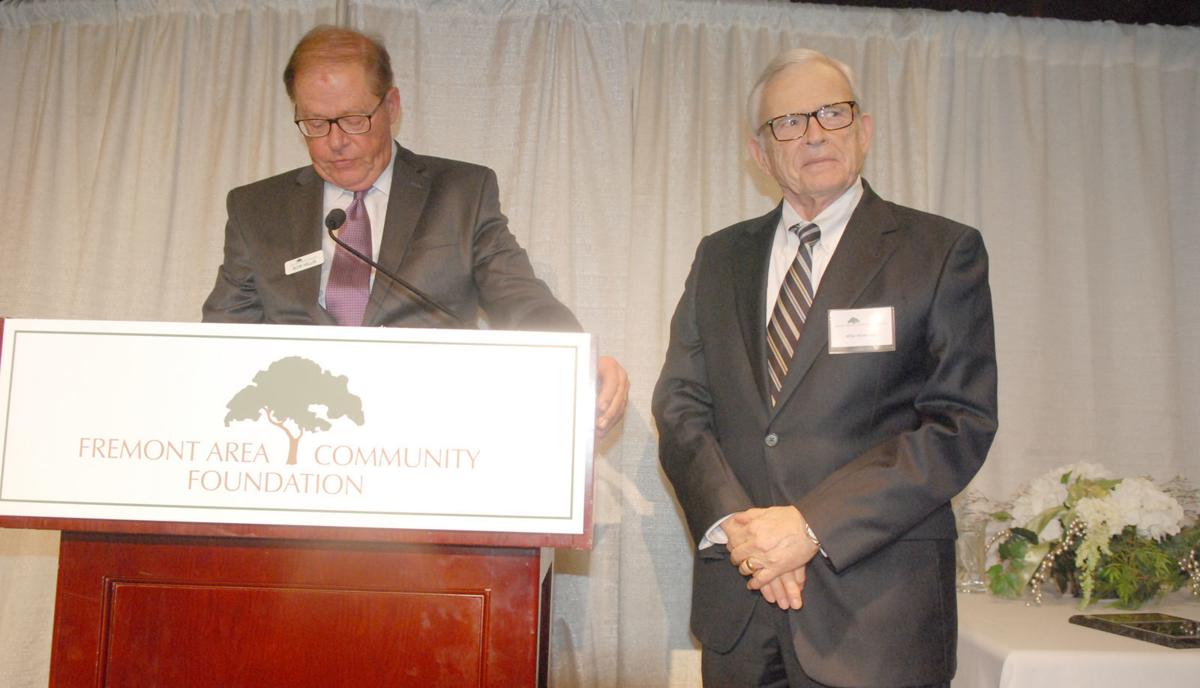 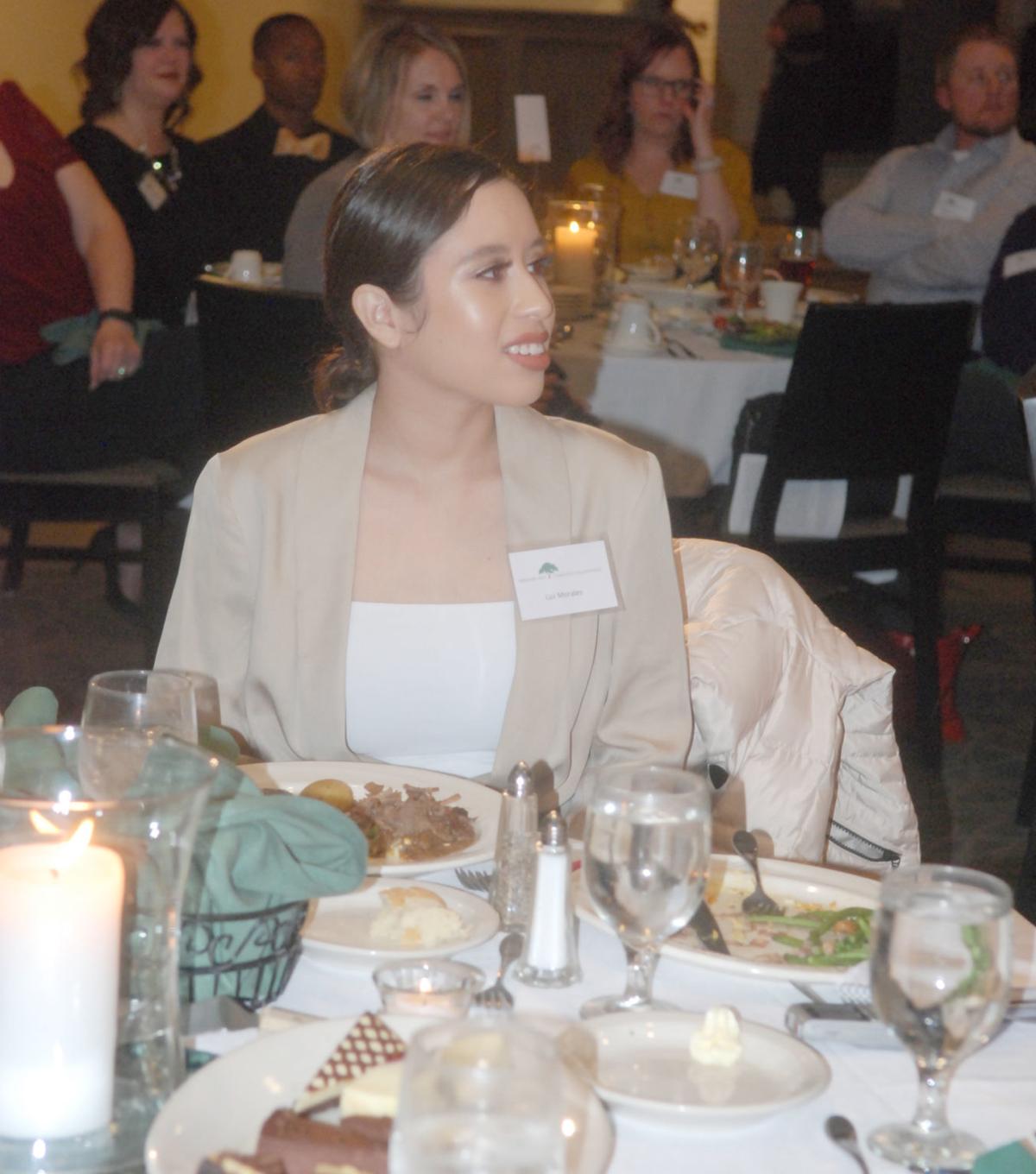 Terry McClain, left, vice president of the Fremont Area Community Foundation, presents a Certificate of Appreciation to Shelia Monke, who is retiring from the foundation's board of directors. The presentation was made at the FACF banquet on Tuesday night.

Dental hygienist Jazmin Morales wore a bright smile as she thanked the Fremont Area Community Foundation for helping her.

Morales was among approximately 160 people who attended the foundation’s annual dinner on Tuesday night.

Board members and guests looked back on the flooding of 2019, presented awards, celebrated the life of one of the foundation’s founders and looked to the future as the organization plans to celebrate its 40th anniversary in 2020.

Calling it “a year of impact,” Melissa Diers, FACF executive director, recounted the foundation’s accomplishments in 2019. Through strategic grants and partnerships, the foundation – which makes grants for a host of beneficial purposes:

Diers said many banquet attendees worked elbow-to-elbow to help people who’d sought shelter because their homes had been flooded in March.

“Even in the midst of all the flood relief activity, the urgency and the commotion, one thing became very clear during those early days,” she said. “The spirit of ‘community’ had never shown brighter.”

Diers also noted that the Federal Emergency Management Agency predicts long-term recovery is years away for the Fremont area.

“My colleagues and I serving on the Greater Dodge County-Long Term Recovery Group are finding this to be very true,” she said.

The banquet also featured talks by grantees, who told how foundation funds helped them or their organizations.

Kavan, who previously worked for the Nebraska State Patrol for 30 years, said FACF funds launched the project and helped provide the state-of-the-art radio system. The system involves base radio stations in all the school buildings, which are tied into handheld radios used daily. It has a direct link to the Fremont/Dodge County 911 Call Center.

Kavan stated the need for an improved system, citing the 2018 lockdown that occurred when a teen with an airsoft pistol walked into Fremont High School after classes.

Communication occurred via cell phones but wouldn’t have happened had the incident occurred in the middle of the day.

“Cell phone towers only handle about 30 simultaneous calls,” Kavan said. “We would have been overblown by the cell phone calls that were going out. We would never have been able to communicate.”

The new system, which FPS said cost $101,296, will be beneficial during disasters like last March’s flooding.

Morales thanked FACF for the scholarship that helped her get an education. Originally from Mexico, she came to Fremont with her mother and brother.

Morales said her family lived in an unsafe neighborhood, where people tried to break into their home to steal or hurt her. She said she thanks God daily that they didn’t succeed.

Starting at age 13, Morales took the most challenging high school courses and volunteered at many places.

“My family did not have the means to help pay for my education,” she said. “Without your help, I would not have gone to college.”

College wasn’t easy, said Morales, adding that she studied like crazy. Even with two jobs and money she saved before starting college full time, she struggled financially.

Additionally there were extra fees during Morales’ dental hygiene program. She said Fremont Health helped pay for her board exams.

“All of your contributions have impacted my life significantly,” Morales said. “I graduated debt-free. I have a full-time job now, a Jeep, my own apartment and a house I rent to tenants.”

“I hope all of you are proud of me and realize the tremendous amount of help you have provided,” she said. “Thank you for investing in my future so unselfishly and allowing me to pursue the American Dream.”

Amy Hartman, leader of Hearts & Hooves 4-H Club, said the group received a Youth Philanthropy Contest grant of $1,000, which was used to raise money for educational improvements to the Dodge County Fairgrounds’ KidZone.

The group used part of the FACF funds to advertise for its “Best of the Rest Show,” after the Nebraska State Fair. Money was earned through entry fees of sheep and goats and concessions for KidZone improvements to help attendees learn more about agriculture.

Hartman said the KidZone project will be finished by the next Dodge County Fair.

Awards were also presented, with David and Sheila Monke receiving the 2019 Betsy Mulliken Award for Philanthropy. The Monkes have contributed to many charitable organizations.

Michael Wiseman of Wiseman Law Offices is the 2019 Professional Advisor of the Year recipient. Wiseman has served on the FACF grants committee since its inception.

“The community foundation is stronger today for the outstanding service of both Sheila and Russ,” said Terry McClain, foundation vice president. “As the foundation does every year, a tree will be planted in a Fremont area park in honor of these retiring board members.”

New board members are Koni Shallberg, who co-owns Fremont Electric with her husband, Les, and Tanya Dillon, who is married to Blake Dillon and is a Tiger Pride Association volunteer.

The program closed with a video honoring the life of one of the foundation’s founders, Marv Welstead, who was 98 years old when he died in February.

“Our community and our foundation have been blessed with strong and visionary leaders, none more committed than the late Marv Welstead,” Diers said. “Everyone who knew Marv, knew him to be a tireless advocate for the community.”

Sgt. Hector Ramirez remembers what it was like to get a care package while serving in Iraq in 2004.