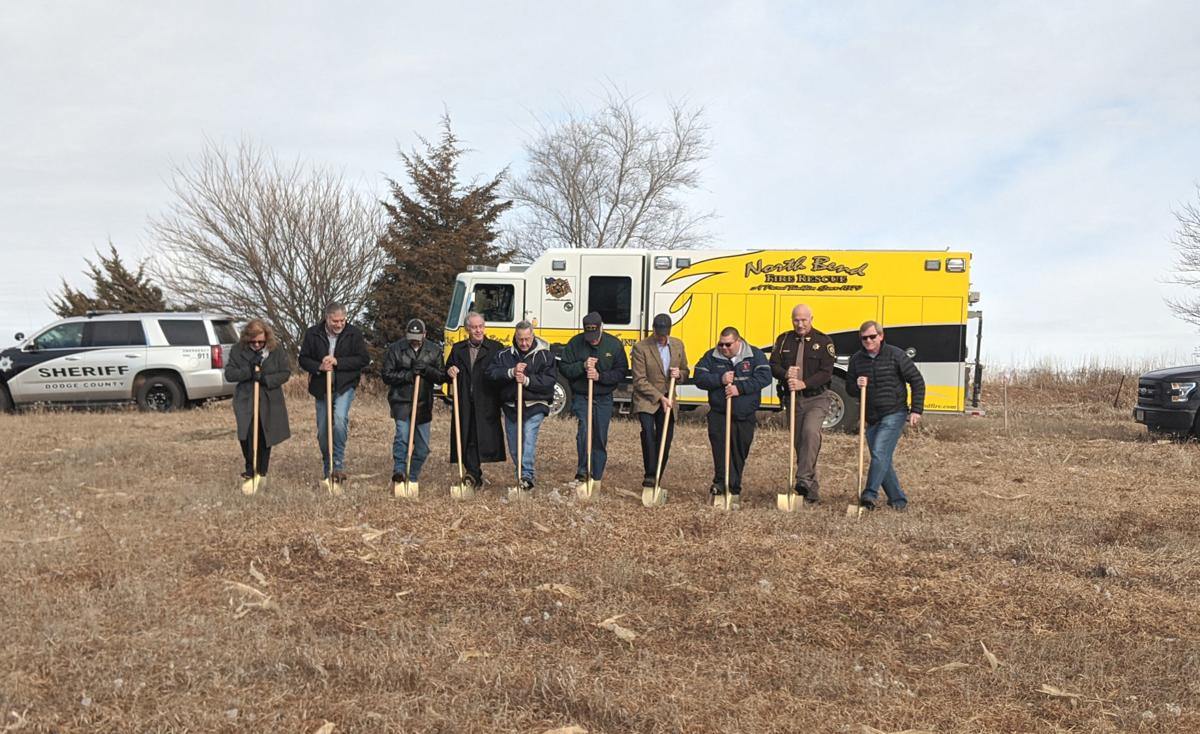 Dodge County officials and local law enforcement members take part in a groundbreaking at the planned site for one of four new radio towers northeast of North Bend Tuesday morning. 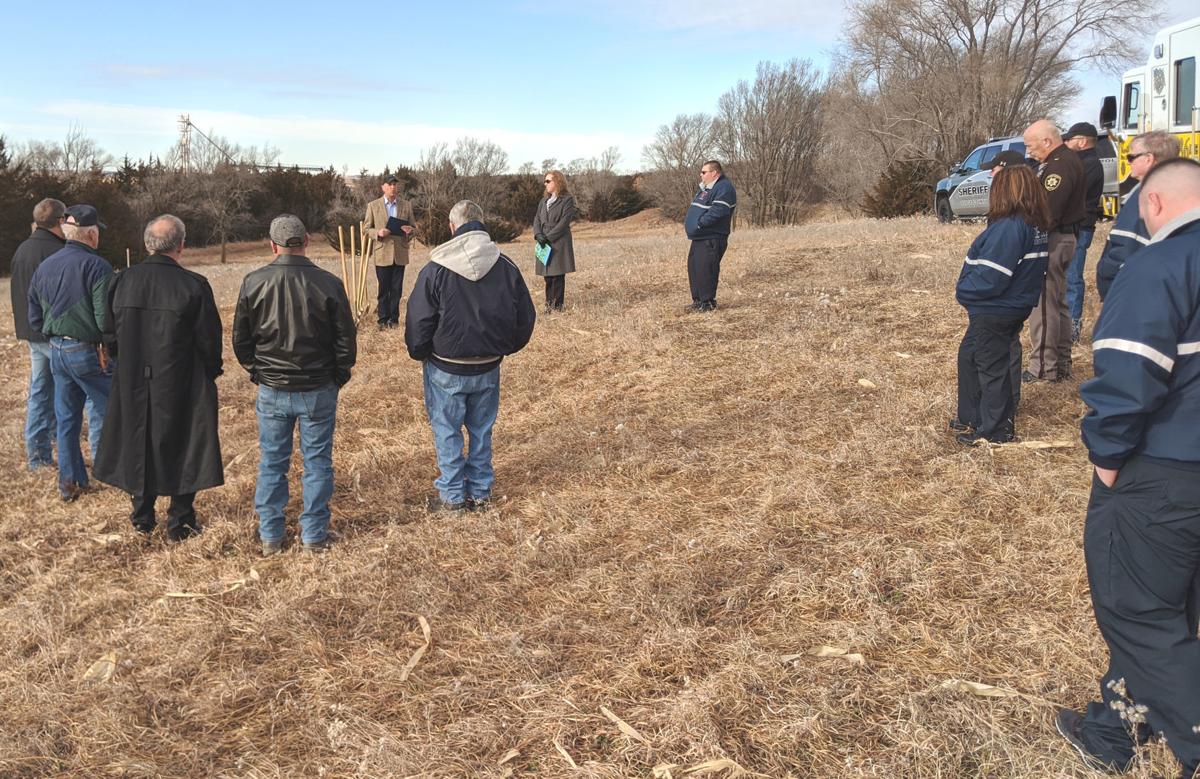 Dodge County Board of Supervisors Bob Missel speaks at a groundbreaking for one of four new radio towers northeast of North Bend Tuesday morning. The towers will be part of the county's new public radio system.

A groundbreaking for one of the four planned towers was held near the intersection of Foothill Road and County Road 10, just northeast of North Bend.

The county’s new public radio system has been in the planning stages for almost two years, said Shelly Hozerland, communications director for Dodge County. It was approved by the Dodge County Board of Supervisors in July 2018.

The 800-MHz digital trunked radio system will allow the Dodge County Sheriff’s Office, local law enforcement agencies and local first responders throughout the county to contact each other on the same frequency.

Dodge County Board of Supervisors Chairman Bob Missel called the groundbreaking a “great day” for the county.

Missel acknowledged Holzerland’s help in organizing the groundbreaking and for the entire project.

“Shelly’s been instrumental in providing leadership and communication between individuals, getting the word out as we move forward,” he said. “So Shelly, thank you so much for all you’ve done.”

Missel also thanked the county board, which had members in attendance at the groundbreaking, for their willingness to take the project one.

“It was a little scary just to even consider the size of this project, but I think as it develops and we move forward, the rewards will be great,” he said. “I believe that this radio system will provide our first responders with the highest-quality, most reliable radios available today.”

Supervisor Doug Backens said he was happy to be at the site Tuesday morning.

“It’s just a good opportunity for the county to get all the first responders together and make it safe and continue the efforts that they provide to our community every day to make us all safe,” he said.

Missel also highlighted the efforts of the Fremont/Dodge County Public Service Answering Point (PSAP) Governing Board, which is made up of city councilmembers and county supervisors.

“I think it’s a good example of governments being able to come together successfully in providing a greater level of service to its community through that partnership, so that’s been a great thing,” he said.

Missel thanked Rey Freeman and Mike Mazzitello, who are working as consultants on the project.

As the project moved forward, Missel said the level of expertise increased beyond the capabilities of the county board, which led them to reach out to Freeman to hire as project chairman.

“Ultimately, we engaged in a contract with Rey, and he has done a tremendous job providing us technical advice across the board, from the radios to the towers to every piece of this project,” he said. “We couldn’t have done it without them.”

Freeman said the groundbreaking was a “huge first step” after so much preparation.

“This is leading-edge technology, and it’s going to be a huge improvement for all the public safety responders in the county,” he said.

Freeman said construction will begin soon and will include building roads up to the towers for easier access.

“This winter is going far better than last winter, so that should allow the crews to get a jumpstart on things here,” he said. “I wouldn’t be surprised if we see some construction in the next 30 days, maybe.”

During his talk, Missel also thanked Jeff Quist for his work on seeking out locations and Fremont Fire Department Capt. Tom Christensen.

“Tom has been instrumental in helping get the word out to the community, to first responders on what this could mean for their departments,” he said. “And as this project developed, Tom’s been that great communication link.”

The North Bend Fire Department was one of the first fire departments to request a county-wide improvement on communications, Holzerland said.

“That kind of helped set the tone, I think, for other rural entities out there,” Missel said. “It meant a lot, your willingness to say, ‘Hey, this is a good thing. We want to be a part of it.’”

NBFD Chief Waylon Fischer said after the fire department narrowbanded its radios in 2013, it failed to have good communications in the corners of its districts, with staticy and muffled sound.

“With this new system, it’s going to provide better coverage for us, and the quality of hearing people is going to be a lot better on there,” he said.

The radios that will be used in the new system are already in use by the sheriff’s office, Missel said.

“Every deputy I’ve spoken with praises the system, touting the superior quality that the communication provides,” he said.

“The deputies are most vulnerable to assaults and other threats not when they’re sitting in their patrol car, but when they are out standing along the highway at the window of a stopped vehicle or in a residence on a domestic violence call, when a portable radio is their lifeline,” he said. “And the tower that’s going to be erected here and in three other sites throughout Dodge County go to make that portable coverage possible.”

Hespen said the radio towers will give deputies and first responders adequate portable coverage at the scene of an emergency with not only other agencies in the county, but with Washington and Douglas counties as well.

Hespen thanked the board for listening to the concerns of first responders and for getting the project started.

“We know it was a big step for Dodge County, and we appreciate you moving forward with it,” he said. “I think this is just an enormous step in radio technology that’s going to serve Dodge County and all of its residents well for many years in the future.”

After more than 1 1/2 years of planning, Dodge County is getting closer to constructing four towers for its new public safety radio system.

The City of Fremont will host two public meetings concerning floodproofing and flood insurance next week.

As the 2020 primaries approach, delegates from the Nebraska Democratic Party will convene in Milwaukee this July to bring the vote of Nebraska…

Aspyn Aufenkamp made an earlier-than-expected arrival.

The Lied Center for Performing Arts in Lincoln is kicking off the new year with an eclectic mix of shows.

The Alzheimer’s support group meets the second Tuesday of the month at The Heritage at Shalimar Gardens.

Fremont City Councilmember Glen Ellis has announced his candidacy for the mayoral position of Fremont in the 2020 election.

Dodge County officials and local law enforcement members take part in a groundbreaking at the planned site for one of four new radio towers northeast of North Bend Tuesday morning.

Dodge County Board of Supervisors Bob Missel speaks at a groundbreaking for one of four new radio towers northeast of North Bend Tuesday morning. The towers will be part of the county's new public radio system.