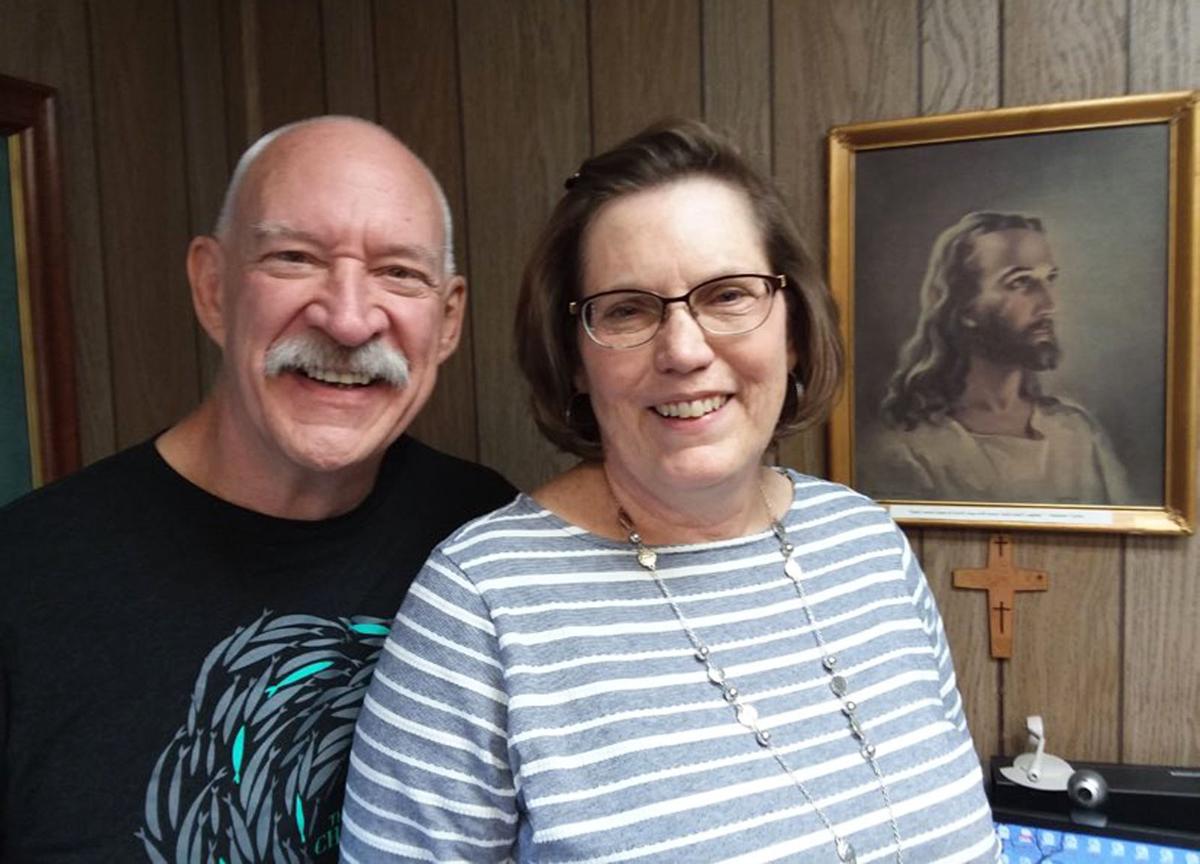 The Rev. Dan and Deb Heuer have served Trinity Lutheran Church and School for 15 years. He is retiring and preaching his last sermons at the church this weekend. 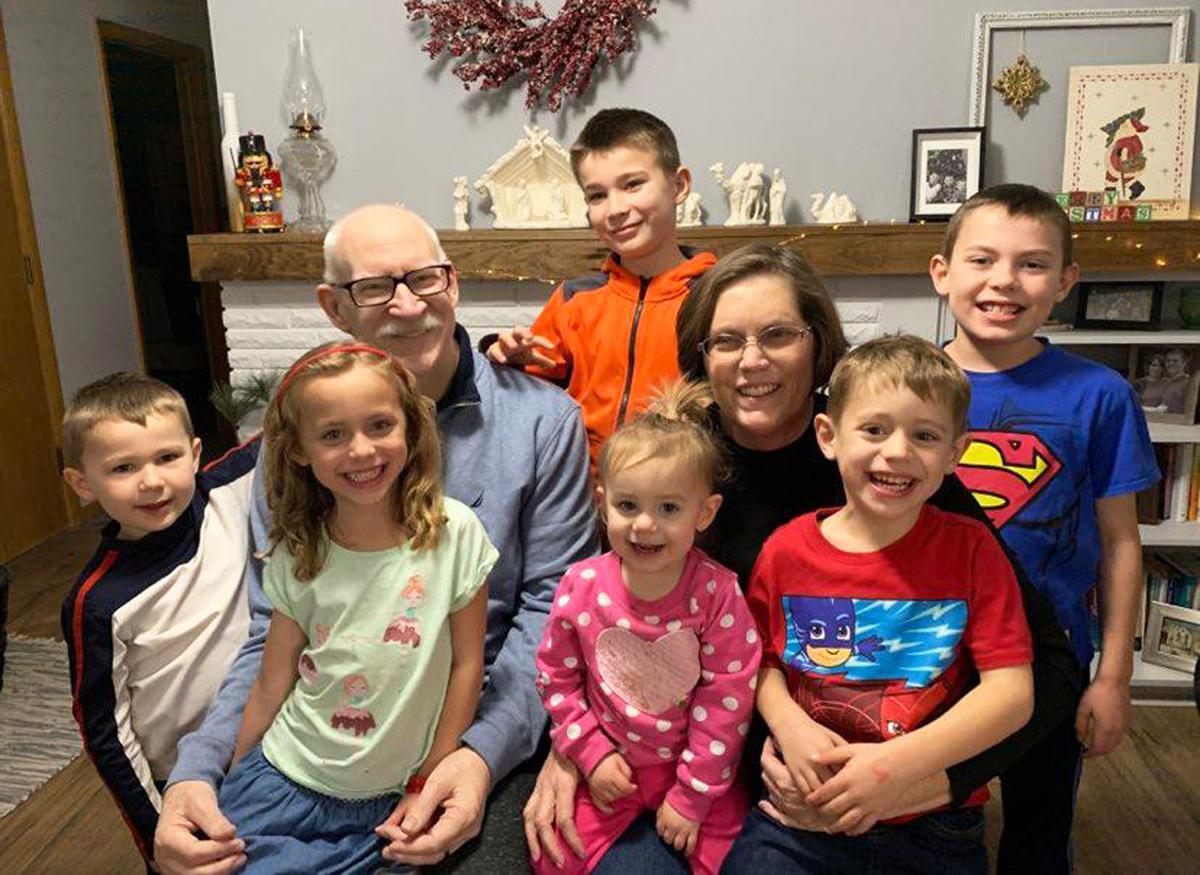 The Rev. Dan and Deb Heuer are shown with their grandchildren. From left are: Benjamin, Jazlyn, Greta, Henry and Micah. Eli is in the back next to the pastor. 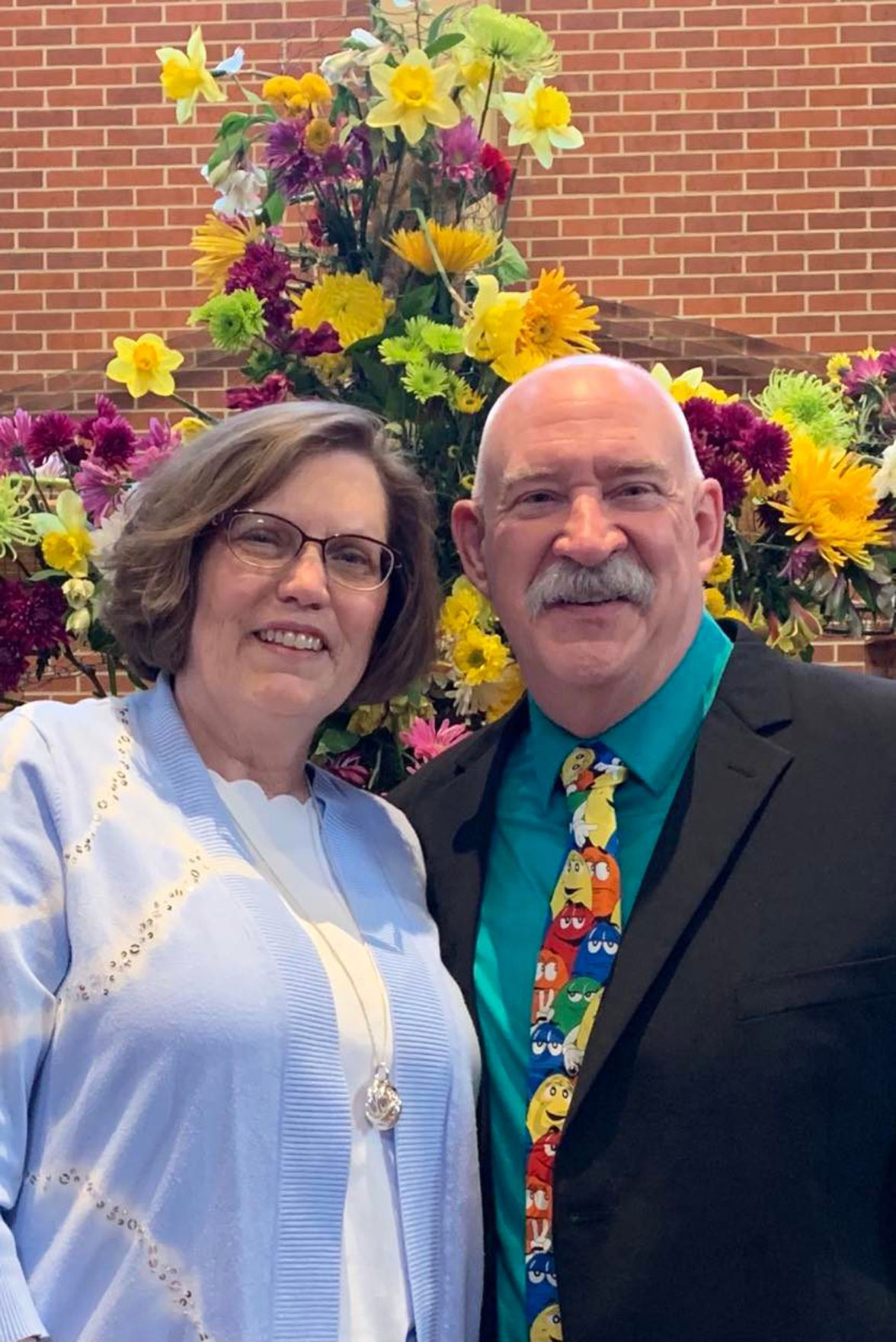 The Rev. Dan and Deb Heuer have served Trinity Lutheran Church and School for 15 years. Heuer is shown in hi M&M candies tie. 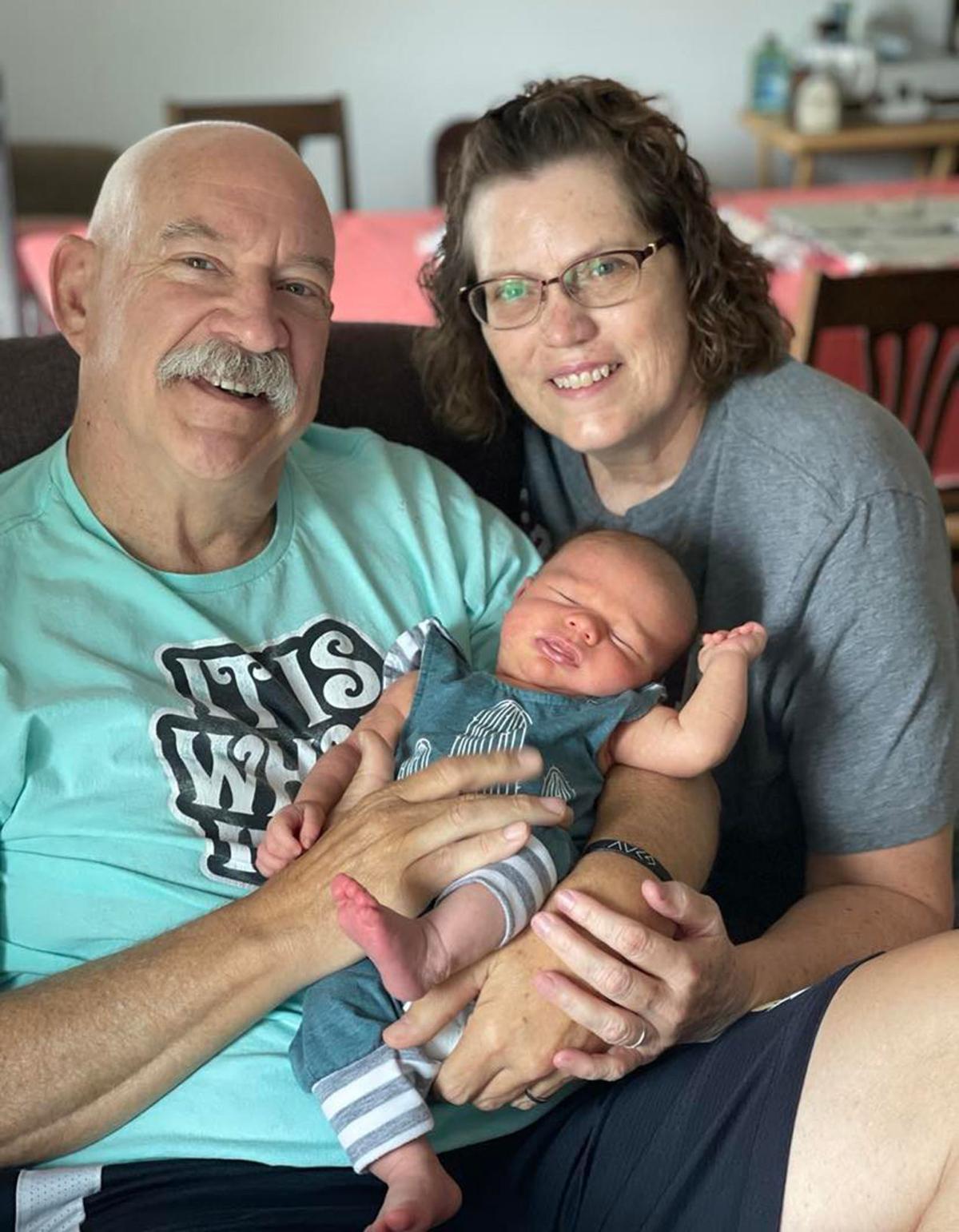 The Rev. Dan and Deb Heuer are shown with their grandson, Hans.

The writing wasn’t on a wall.

But it was visible

It happened a little more than 15 years ago. Back then, the Rev. Dan Heuer and his wife, Deb, wondered if they should accept a call to serve Trinity Lutheran Church and School in Fremont. They’d had an interview at the church and were heading home.

“As we were leaving town, Deb just said, ‘I wish God would make it clear – that he wouldn’t just give us a posted note, he would show us on a billboard if we are to accept Trinity’s call,’” Heuer said.

They were driving past the Wooden Windmill restaurant on South Broad Street, when they saw it: an American National Bank advertisement on a billboard. The ad featured the picture of a cow and the words:

“There is no better time to mooove.”

The Heuers accepted the call.

A decade and a half later, the pastor is retiring. He hasn’t seen any billboards with cows lately, but Heuer said he knows it’s time to step aside.

Heuer’s ministry at Trinity has included ministry to nursing home residents, the school, and also to grieving people via GriefShare sessions.

Schoolkids liked to come to his office for M&M candies. Adults appreciated the Gospel-generated messages on his vehicle’s license plates.

Originally from Hamburg, Minnesota, Heuer graduated from what’s now Concordia University with a bachelor’s degree in kindergarten-through-12th grade education in 1979.

He and Deb, who’s from Prairietown, Illinois, married that year.

After that, they took calls to teach in Detroit, Michigan, and in Texas, before moving to St. Louis, Missouri, where he went to Concordia Seminary.

Heuer was ordained at St. Peter’s Lutheran Church in Davenport. The Heuers served there and then at churches in Kearney and Hastings, respectively, before coming to Fremont in 2006.

He’s enjoyed his time in Fremont, especially the opportunities to share Christ with people.

“I’ve loved the relational aspect of ministry,” he said.

He visited people who were homebound and in nursing homes and sought to be active in the school as well.

For 14 years (excluding the year of COVID), he led the GriefShare ministry for people mourning the loss of loved ones. He offered three sessions a year and most of those who attended weren’t Trinity church members.

“It really was about giving care and comfort to hurting people – no matter where they were in their faith or even church life,” Heuer said.

Heuer benefited along with those to whom he ministered.

“It was very gratifying for me and I learned so much from the people who were class participants on the frontlines of loss,” Heuer said. “And as we talked, as we prayed, those were very impactful times for all of us. I still have relationships with most of the people who went through the class.”

During his tenure, Heuer has enjoyed working with former associate pastors, Mike Meyer and David Coe, and current Trinity senior pastor, the Rev. Anthony Gerber – all of whom he calls great partners in ministry.

The Katie the Comfort Dog ministry also developed during his tenure after Trinity staffers learned about the specially trained animals at a 2014 conference in Phoenix.

Then-Trinity teacher Andy Rathe became the team leader for a group of individuals who’d take the golden retriever to provide comfort to hurting people in a host of traumatic situations. Since that time, Trinity volunteers have taken Katie to churches, schools, nursing homes, hospitals and service groups.

Katie has gone to the sites of high-profile tragedies including:

Deb Heuer has been among volunteers to serve in that ministry.

Back in Fremont, Heuer has been involved in some light-hearted ministry.

“It was always fun to have kids stop in the office for M&Ms,” Heuer said. “There were a handful of kids who were actually pretty regular in stopping by my office.”

He often described the treats – consisting of candy-coated chocolate – as his “Ephesians candy.”

That’s when the candy became an object lesson.

Heuer said the dark part represents people in their sinfulness and the candy coating is Christ, who covers and encapsulates us so we’re acceptable to the Father.

Heuer could use the license plates on his vehicles as a way of sharing the Gospel, too.

The plates’ message point to how Christ died to save people from their sins so those who believe can spend eternity with him in heaven.

The Gospel-related messages began while the Heuers where in Davenport. Back then, they had cars that were breaking down. The congregation collected funds to give them a down payment on a good car.

So the license plate bore the word: “Undeserved.”

The words “Going Up” appeared on a Heuer license plate while the family was serving a church in Kearney.

Heuer, who was involved in campus ministry at the University of Nebraska at Kearney, bought a 1962 Oldsmobile hearse. He built a little wooden coffin on which he put the message: “University Lutheran Center – We’re Dying to Meet You.”

He put the coffin atop the hearse.

If students didn’t recognize the non-descript building where campus ministry took place, they’d remember the hearse parked near it.

The license plate on the hearse read: “Going Up.”

Heuer also gave designated driver rides for students who couldn’t get themselves home after they imbibed too much.

He’d take a Polaroid photo of those students in the hearse. With each student, he’d leave a photo along with a message basically reminding them that they didn’t want to do something foolish to cut their life short.

During his ministry, Heuer also hosted coloring contests in which the congregation voted by submitting a color and design for a car he was driving. Along with that vote came a donation. The donations went to the youth group for trips or mission outreach.

Using spray paint, he’d attempt to replicate the winning design on the car.

“The first one was blue with a yellow lightning stripe down the side,” he said. Heuer’s ministry would start to take a turn six years ago, when he was diagnosed with kidney cancer. The kidney was removed. A year later, he’d learn the cancer had metastasized to his right femur.

In 2016, Heuer was in the back of the church after a school chapel. He’s grateful the students had just left, but some parents remained.

“It (the femur) snapped and I went on the ground and waited for the squad to come and pull my leg apart so they could put it in an (air) cast and stabilize it,” he said. “The Fremont rescue guys did a great job.”

With cancer in his leg, Heuer realized he wouldn’t be able continue ministering in the same capacity.

“So the congregation was nice enough to allow me to become the associate pastor to take a step back and then we called a new senior pastor, which is Pastor (Anthony) Gerber,” Heuer said. “Now since the cancer has continued to be in my leg, it’s time. I’m 65 this week so it’s time for me to step out for health reasons.”

Former Trinity principal Greg Rathke will start seminary online in February and will serve in the associate pastor capacity when he’s finished in two years.

He’s in charge of the care ministry and has begun visiting homebound parishioners.

“He’s doing a great job,” Heuer said. “It will be a seamless transition and I’m thankful to God that Jesus is still going to be the focus of all the ministry at Trinity.”

Heuer said people have been complimentary and kind about his ministry.

He continues to battle the cancer, which he said is static now. He and Deb plan to stay in Fremont. He appreciates the community.

“I say ‘thank you’ to the Fremont community for the people they are and the blessings that we were part of here in town,” he said. “Continue to pray for all the churches and the ministries as life is hard, but Jesus is still the answer to that.”

Places where the Rev. Pastor Dan and Deb have served

Places where the Heuers have served.

Although they were award recipients, Russ and Jennifer Peterson cast the spotlight on someone else during the Fremont Area Community Foundatio…

Dean Jacobs hopes the public will make this winter a little warmer for kids in Macy.

It wasn’t like Tim Petersen not to answer his phone.

Nebraska Extension has announced applications are available for beginning training as a volunteer in the Extension Master Gardener program. 20…

Lani Polzin knows the relationship that can develop between a physical therapist and a patient.

Grief support group to be offered in December

There will be music and merriment.

The Rev. Dan and Deb Heuer have served Trinity Lutheran Church and School for 15 years. He is retiring and preaching his last sermons at the church this weekend.

The Rev. Dan and Deb Heuer are shown with their grandchildren. From left are: Benjamin, Jazlyn, Greta, Henry and Micah. Eli is in the back next to the pastor.

The Rev. Dan and Deb Heuer have served Trinity Lutheran Church and School for 15 years. Heuer is shown in hi M&M candies tie.

The Rev. Dan and Deb Heuer are shown with their grandson, Hans.