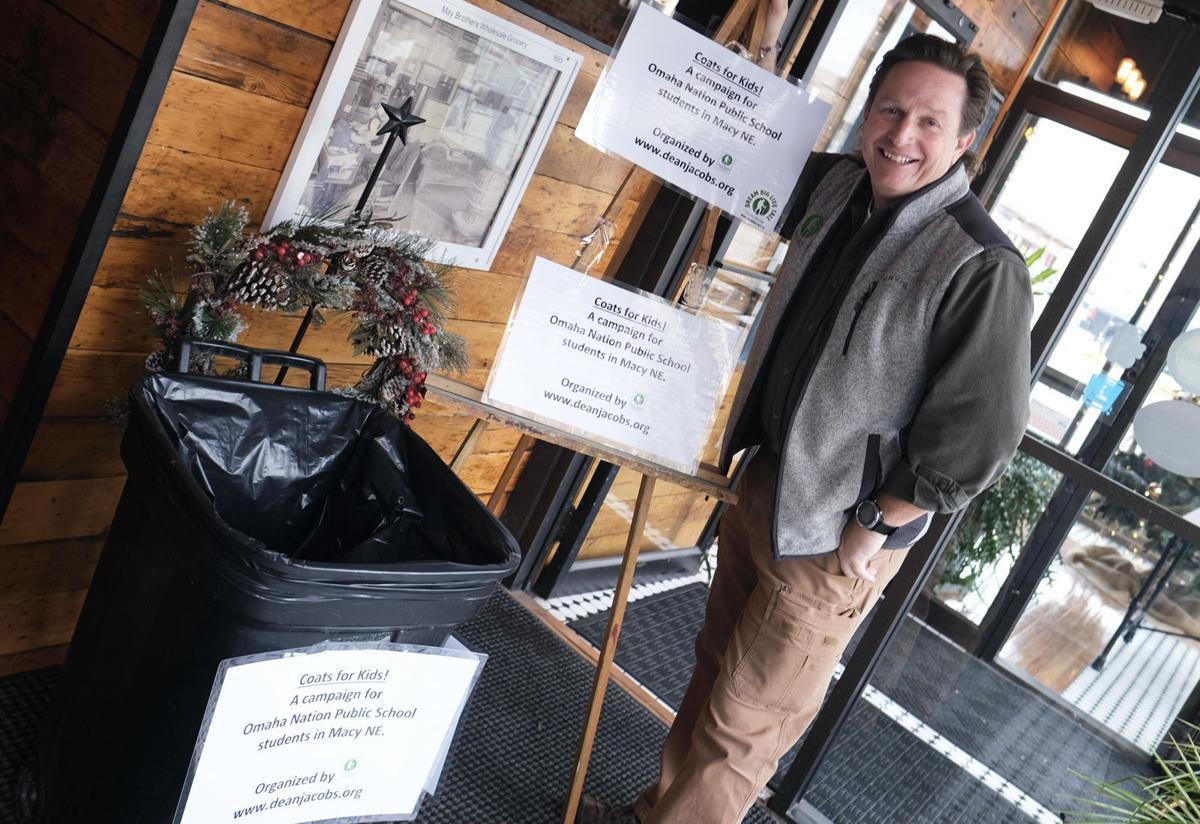 Dean Jacobs stands next to the "Coats for Kids" display at the Milady Coffeehouse in downtown Fremont. 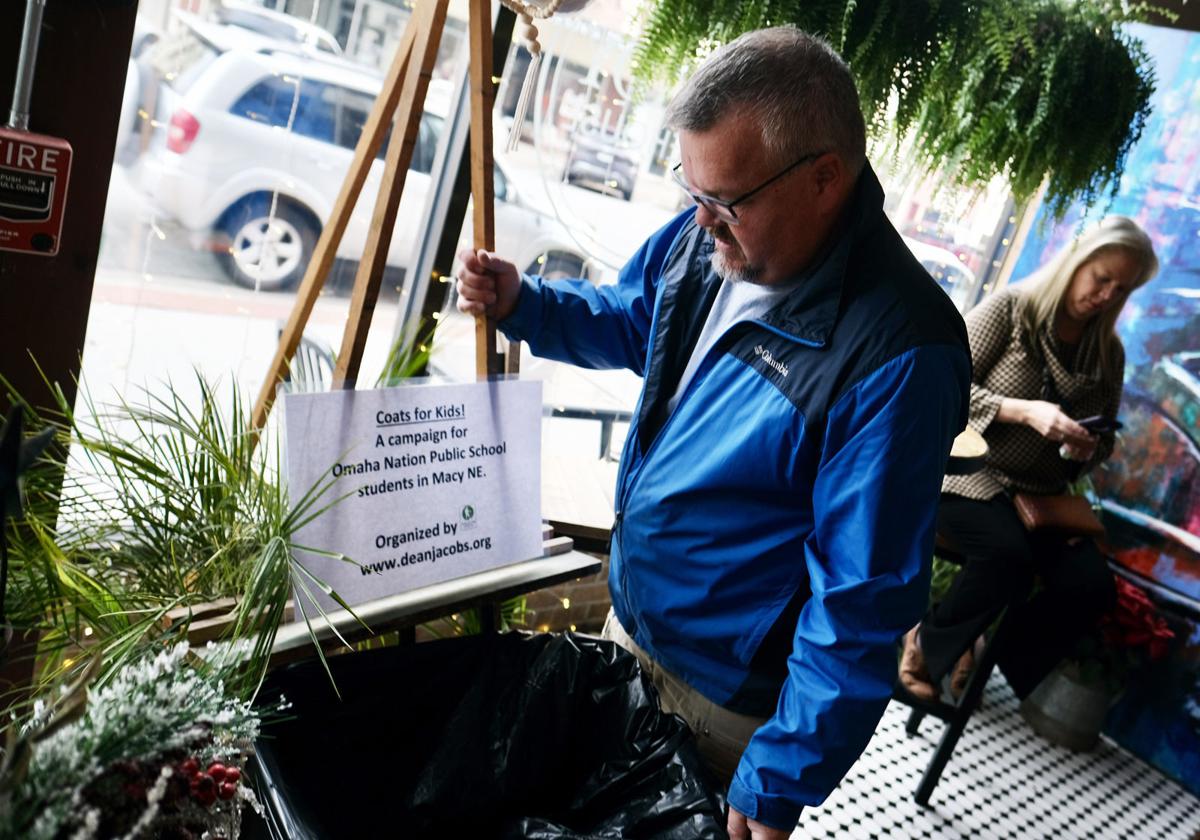 Glen Ellis helps set up a receiving tube for "Coats for Kids" at the Milady Coffeehouse in downtown Fremont. 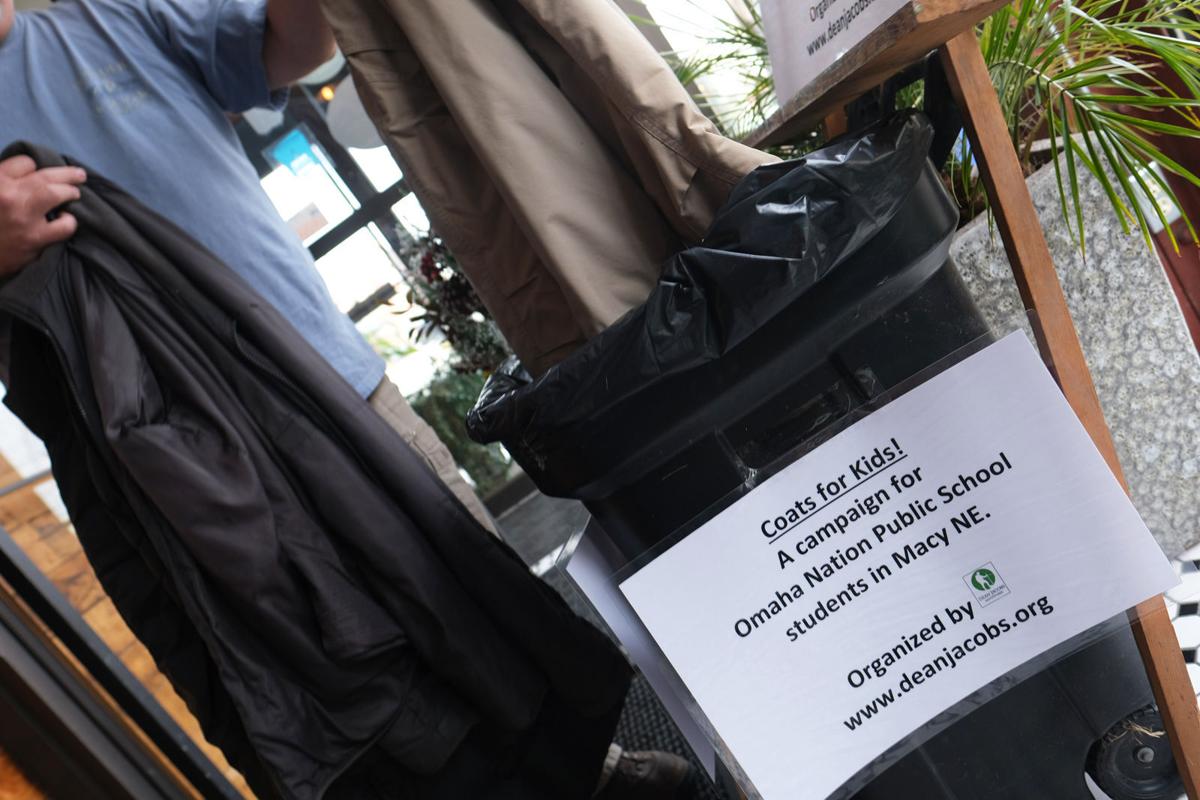 A customer drops in a couple of coats at the Milady Coffeehouse in Fremont for the Omaha Nation Public School students.

Dean Jacobs hopes the public will make this winter a little warmer for kids in Macy.

Jacobs is a world traveler, author, photographer and speaker, who encourages people to follow their dreams. Each Thursday, the Fremont man does his inspirational work with students and staff at Omaha Nation Public School.

During a conversation with a staffer, Jacobs learned that several students don’t have winter coats.

So Jacobs has launched “Coats for Kids — a Campaign for Omaha Nation Public School Students in Macy.”

The public is encouraged to bring coats and place them in a large receiving container at Milady Coffeehouse, 105 E. Sixth St., in downtown Fremont.

Jacobs plans to start taking coats to Macy as he gets them.

“I will personally take all the coats to the school to help make sure they get where they are needed,” Jacobs said.

Jacobs said he’s been told that 50 coats would change the world for 50 kids.

Omaha Nation is a public school in Macy, which is the center of the tribal government for the Omaha, a federally recognized Midwestern Native American tribe. Macy is in Thurston County, the poorest county in the state of Nebraska.

“Coats for Kids is something I came up with to find a solution for a challenge for these kids I have a connection with,” Jacobs said. “These are amazing kids who have incredible potential and possibilities and it’s my passion to make sure kids follow their dreams.”

“We should never let a jacket stand in the way of a kid getting an education,” Jacobs said.

“They gracious enough to get on board with the idea,” he said. “They love the idea, actually.”

The receiving container is marked with a sign that reads: “Coats for Kids! A Campaign for Omaha Nation Public School students in Macy, NE.”

Those who’d rather donate funds may send a check to: Dean Jacobs, P.O. Box 911, Fremont, NE 68026. Make the check out to: Travel for Life Foundation.

Donors also may send funds to Jacobs via PayPal or Venmo. His email is dean@deanjacobs.org

“If people are moved to participate with this, I’m very grateful,” Jacobs said.

Jacobs has posted the project on his Facebook page and is asking friends to share it on theirs. He’s begun seeing response.

“I’m already humbled and grateful for how people are already responding; It gives me hope in humanity,” he said. “I think things like this help remind us that we need each other and that we can make the world better by watching out for each other.”

He notes something else.

“This isn’t going to save the world, but it’s going to help make the world better for some kids,” Jacobs said. “This is going to reduce the suffering for people who’ve already suffered enough.”

It wasn’t like Tim Petersen not to answer his phone.

If anyone has ever lived his dreams, it’s Dean Jacobs.

In her earlier days of playing bridge, Norma Vance shed tears after some games.

Christmas activities for the family are getting an early start this season.

Plan your weekend and upcoming week with these events happening in Fremont and the surrounding area.

Although they were award recipients, Russ and Jennifer Peterson cast the spotlight on someone else during the Fremont Area Community Foundatio…

Fremont-area calendar of events for Nov. 18-20

The Resource Level II program at Fremont Middle School has three students who have tested positive for COVID-19.

Heuer to retire from Trinity Lutheran Church and School

The writing wasn’t on a wall.

Lani Polzin knows the relationship that can develop between a physical therapist and a patient.

The Banquet will not be serving meals on Nov. 25

There will not be a meal served Thursday, Nov. 25, by The Banquet at First Lutheran Church in Fremont.

Grief support group to be offered in December

There will be music and merriment.

Dean Jacobs stands next to the "Coats for Kids" display at the Milady Coffeehouse in downtown Fremont.

Glen Ellis helps set up a receiving tube for "Coats for Kids" at the Milady Coffeehouse in downtown Fremont.

A customer drops in a couple of coats at the Milady Coffeehouse in Fremont for the Omaha Nation Public School students.