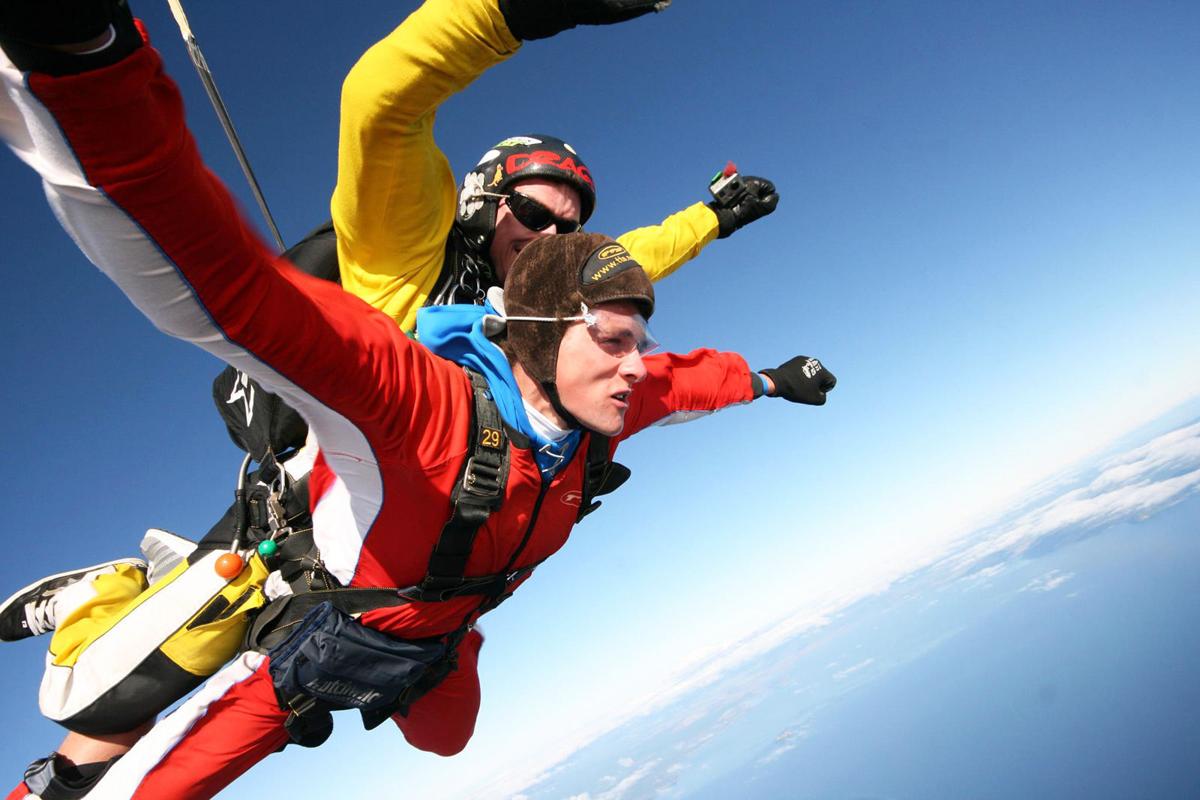 Brett Jamrog, who was ordained as a Catholic deacon in May, is shown skydiving at Lake Taupo, New Zealand in 2013. 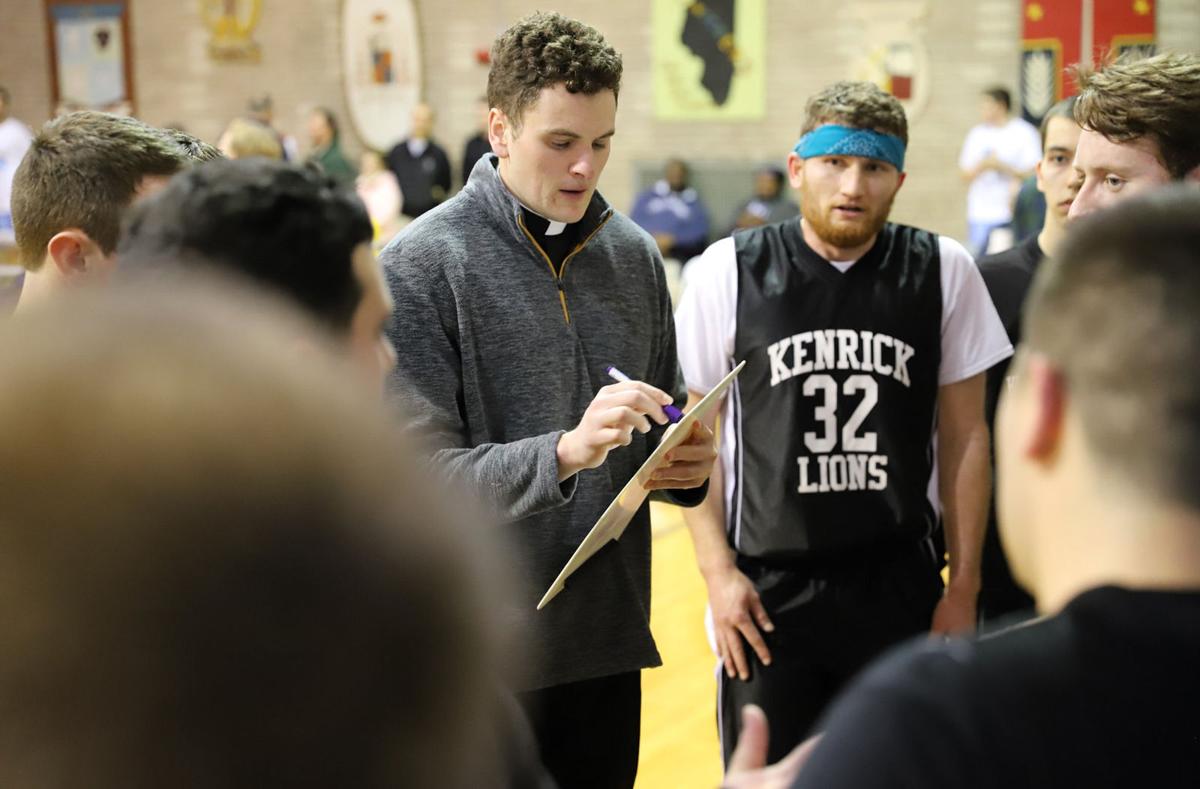 Brett Jamrog, who was ordained as a deacon with the Catholic Church, is shown in this 2020 photo coaching during the Mundelein Basketball Tournament in Mundelein, Illinois, a suburb of Chicago. 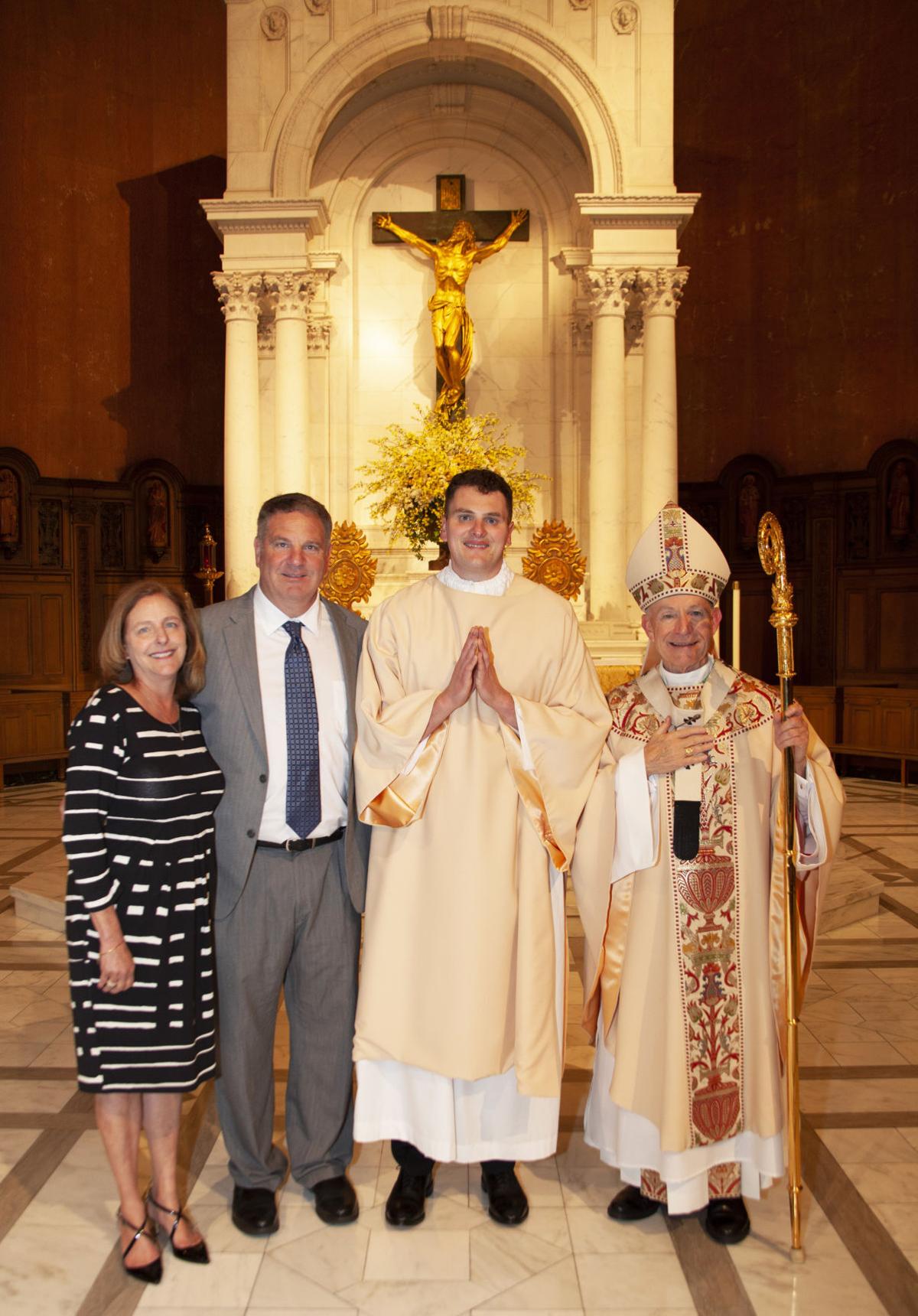 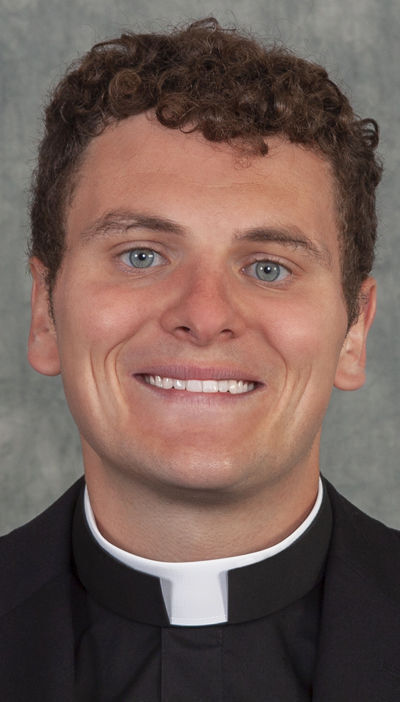 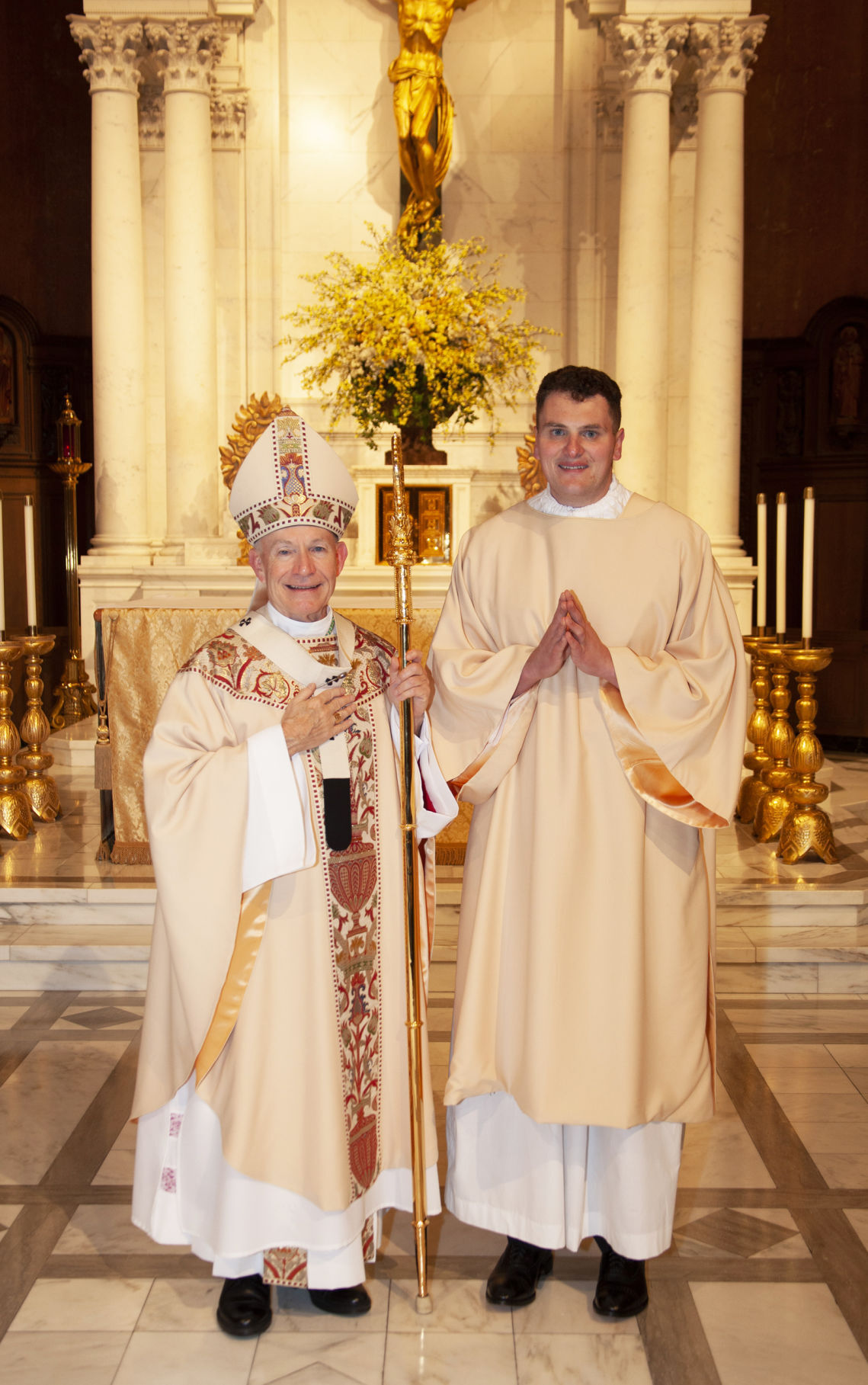 Archbishop George Lucas is shown with Brett Jamrog who was ordained as a deacon in May. 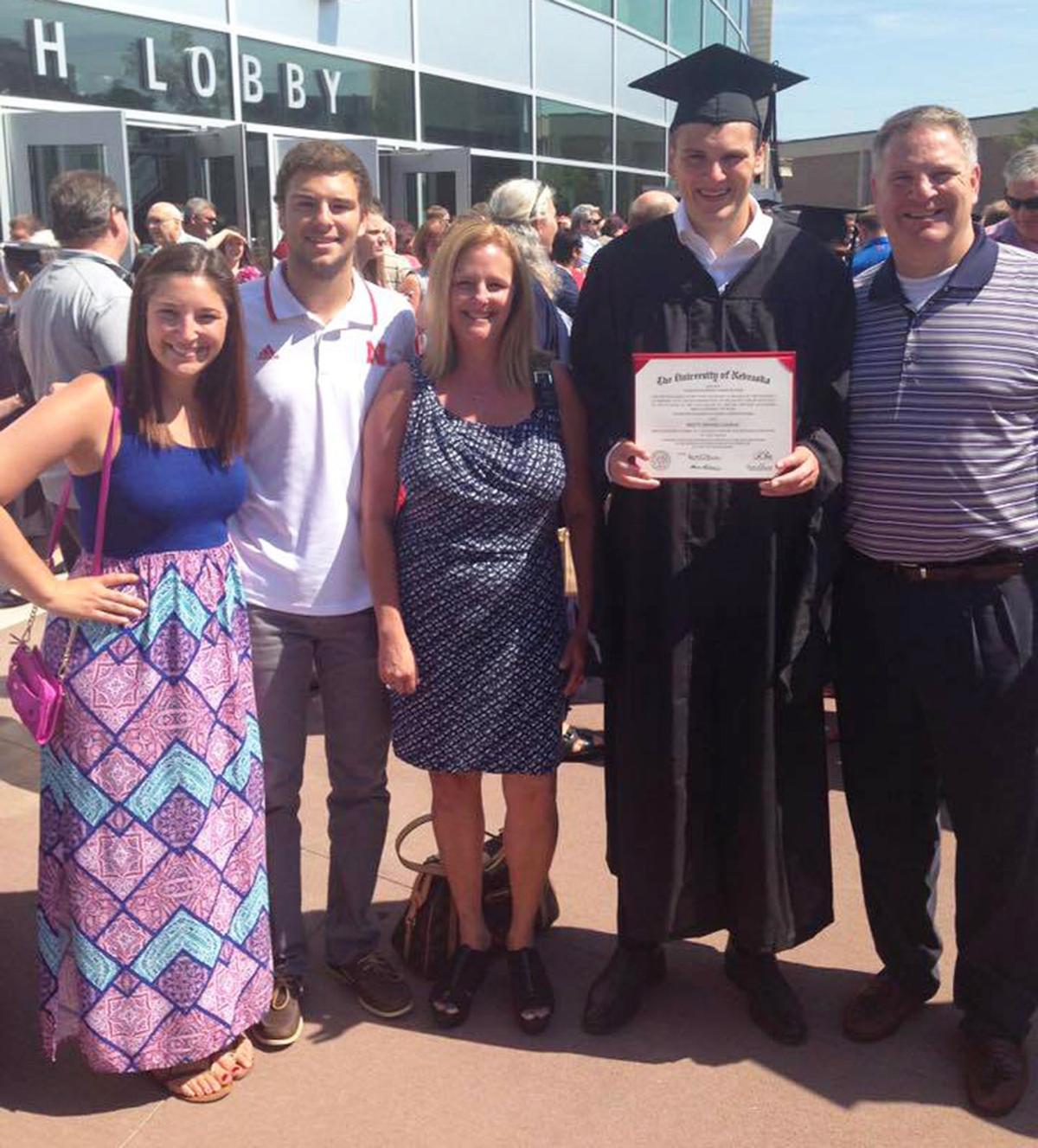 Brett Jamrog, second from right, is shown with his family after he graduated from the University of Nebraska-Lincoln. His family includes his sister, Elizabeth Thielen, brother, Jared, mother, Connie and father, Jeff. 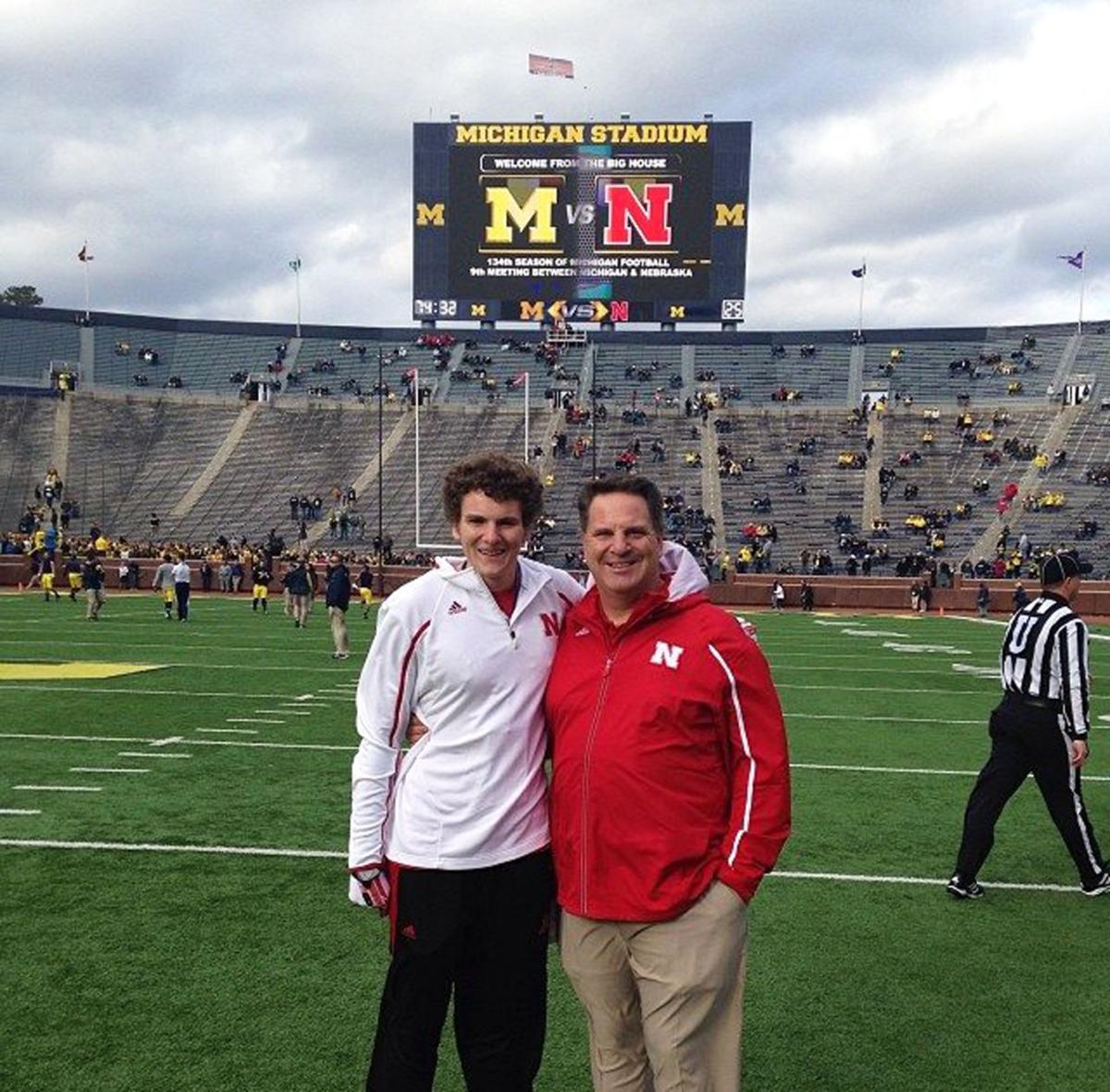 The man who considers Fremont his home was in high school when he first sensed a call to ministry.

He resisted, because he planned to become a football coach.

But that goal would change.

Jamrog was a sophomore at the University of Nebraska-Lincoln when he went on what he describes as a life-changing mission trip to Ukraine in 2013.

Before the trip, Jamrog’s prayers had been meditative.

Jamrog said he began wanting what God wanted for him.

In May, Jamrog was ordained as a deacon with plans to become ordained as a priest next year. He’s serving the Divine Mercy parish in Schuyler this summer before returning for another year of theological studies at Kenrick-Glennon Seminary in St. Louis, Missouri.

The start of Jamrog’s journey began years ago.

Because his dad was a coach, Jamrog said his family, who include his mom, Connie, and siblings, Jared and Elizabeth, moved a lot.

He lived in Fremont for about four months, but considers this community as his home. It’s a place where he went to see his grandparents, Jon and Wilma Hoeven, who had a cabin on a lake.

Jamrog graduated from Lincoln Pius X Catholic High School in 2011. From 2011 to 2014, he was student manager for the Nebraska Cornhuskers football team.

He was a junior when he noticed he was more excited about the Bible study he’d started than working for the football team.

“I wanted to lead people to Jesus and that was more important than anything else in my life,” he said.

During a 2015 pilgrimage to Italy, he saw the place where St. Francis of Assisi grew up. He learned more about the lives of St. Ignatius of Loyola and St. Maria Gorreti.

He learned that St. Francis and St. Ignatius might not have had God at the center of their lives – at first – but when they had that defining moment and the Lord became their whole purpose for existing, God changed their life paths.

“I felt like I had that major shift in my life in Ukraine and now I realized that the priesthood is the best way to give myself away,” he said.

He noted something else.

“No man should become a priest to get something, but to truly give himself to the people as a servant,” he said.

Jamrog graduated from UNL in 2015 with a degree in business administration. He studied philosophy at St. Gregory the Great Seminary in Seward.

After his parents moved, he switched from the Lincoln dioceses to the Archdiocese of Omaha. He started theological studies at Kenrick-Glennon Seminary and then had a yearlong pastoral internship at St. Cecelia’s Cathedral in Omaha.

At the cathedral, Jamrog saw the day-to-day life of the priests and of helping teach in the school there.

Any doubts he had about becoming a priest were gone.

“It’s a big commitment to be a priest, but that year (2018-2019) I saw firsthand the beauty of the priesthood in a new way and how important it is for the people of God to have the priests be holy and be priests who truly want to serve,” he said.

Jamrog returned to St. Louis and finished his third year of theological studies before going to Schuyler.

As a deacon, he’ll help preach and assist the priest at the altar. He’ll be the minister at weddings and help with funerals and baptisms.

He’s learning Spanish and thinks he probably will be assigned to a parish that needs a priest who knows this language.

He hopes to work with youth in the future.

“I know the culture and it’s drifting further and further away from God,” he said. “I think I can relate to youth, because I know what it’s like to grow up with video games and be really focused on sports and I think I can relate well to what they go through on a day-to-day basis.”

Jamrog hopes to be a bridge to lead people to Jesus and help them learn that their identity is in Christ.

He returns to that defining moment in Ukraine.

“I realized that my peace will never be found in worldly things,” Jamrog said. “I will only find true peace and joy in the Lord.”

Jamrog knows the importance of loving the Lord and staying in relationship with him.

“When I encountered that joy and peace that the world can’t give you, that’s when I realized that I want to lead other people to the Lord so they can have true peace and encounter the Good Shepherd – the one who truly satisfies their hearts,” he said. “God is so good.”

Secretary of State Bob Evnen reminds Nebraskans to proudly fly the U.S. and Nebraska flags on National Flag Day, which is Monday, June 14.

Brett Jamrog, who was ordained as a Catholic deacon in May, is shown skydiving at Lake Taupo, New Zealand in 2013.

Brett Jamrog, who was ordained as a deacon with the Catholic Church, is shown in this 2020 photo coaching during the Mundelein Basketball Tournament in Mundelein, Illinois, a suburb of Chicago.

Archbishop George Lucas is shown with Brett Jamrog who was ordained as a deacon in May.

Brett Jamrog, second from right, is shown with his family after he graduated from the University of Nebraska-Lincoln. His family includes his sister, Elizabeth Thielen, brother, Jared, mother, Connie and father, Jeff.