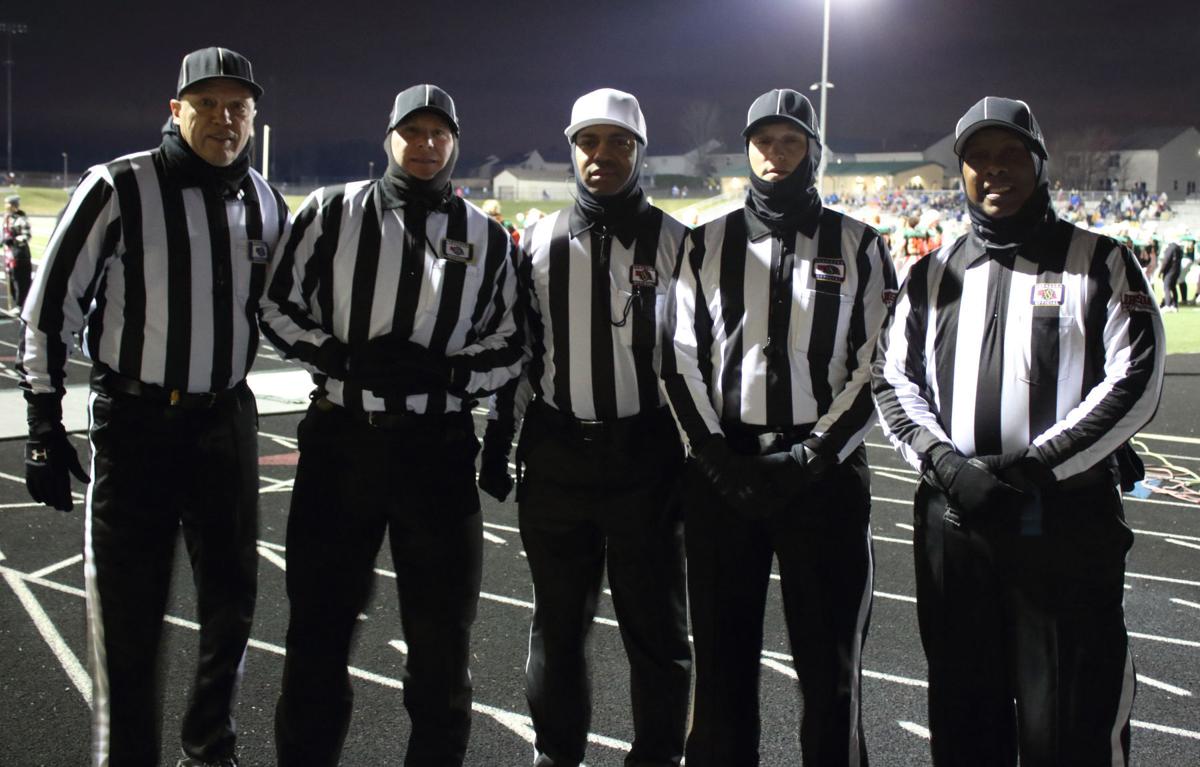 Mark Legband, far left, stands with other referees at the state football championship game at Gretna High School Friday. The game was Legband's last after spending more than 30 years as a referee. 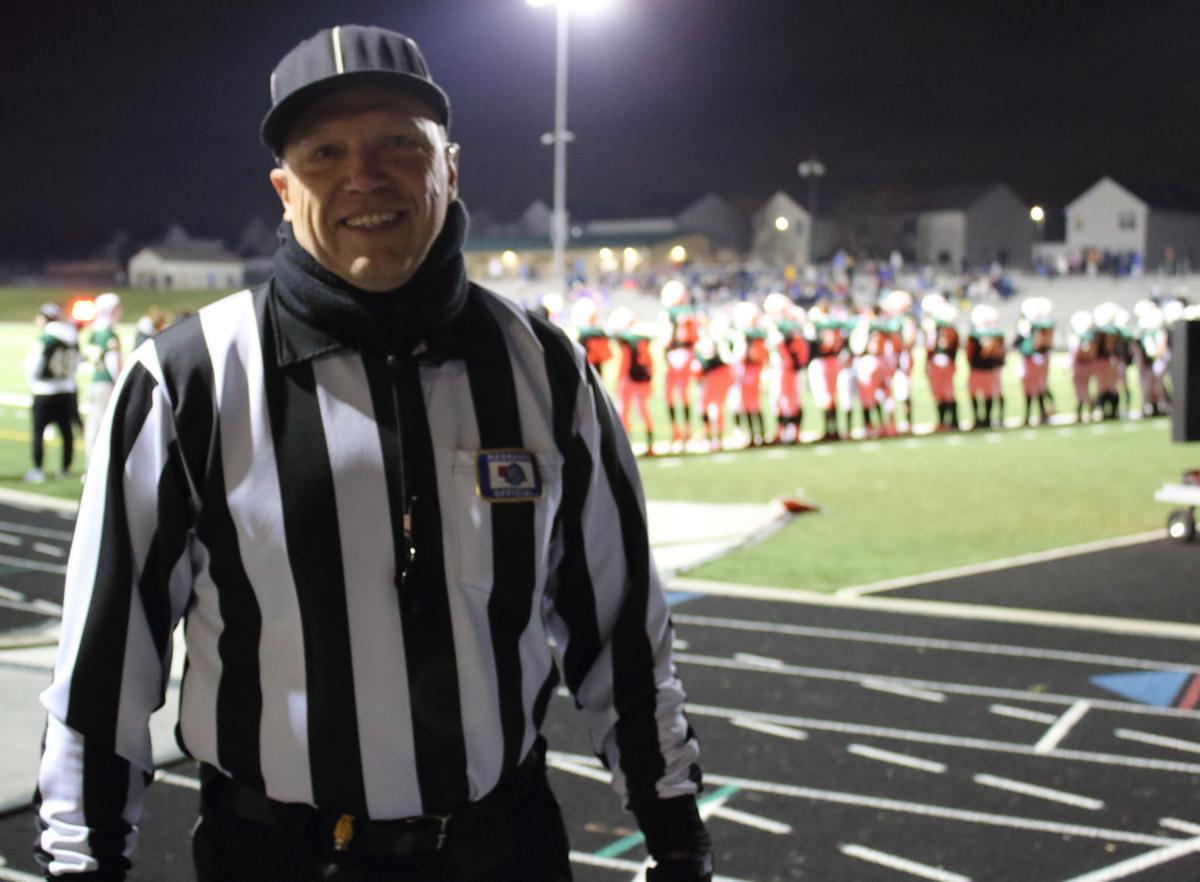 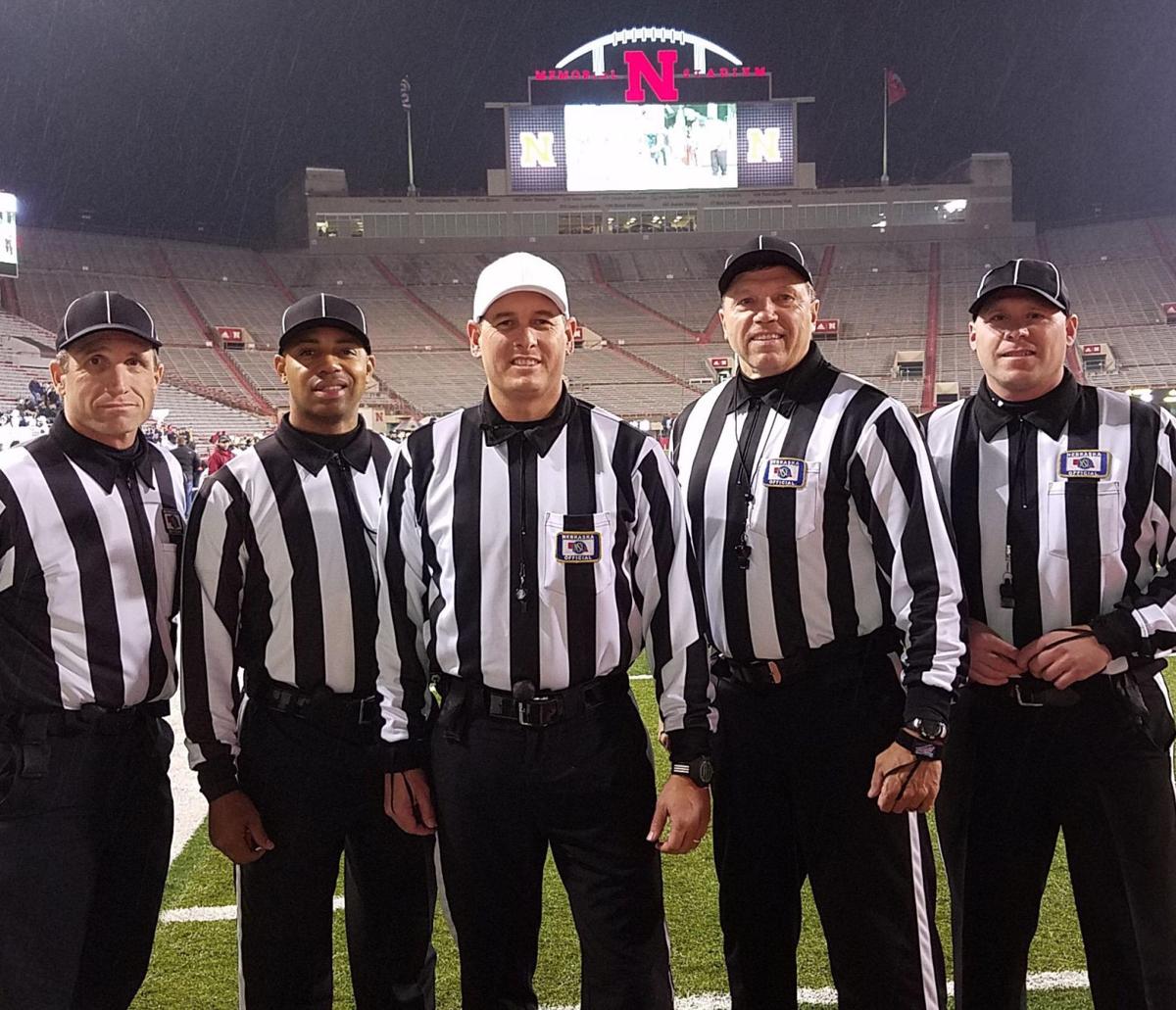 Mark Legband, second from right, stands with other referees at a state championship game at Memorial Stadium in 2018. 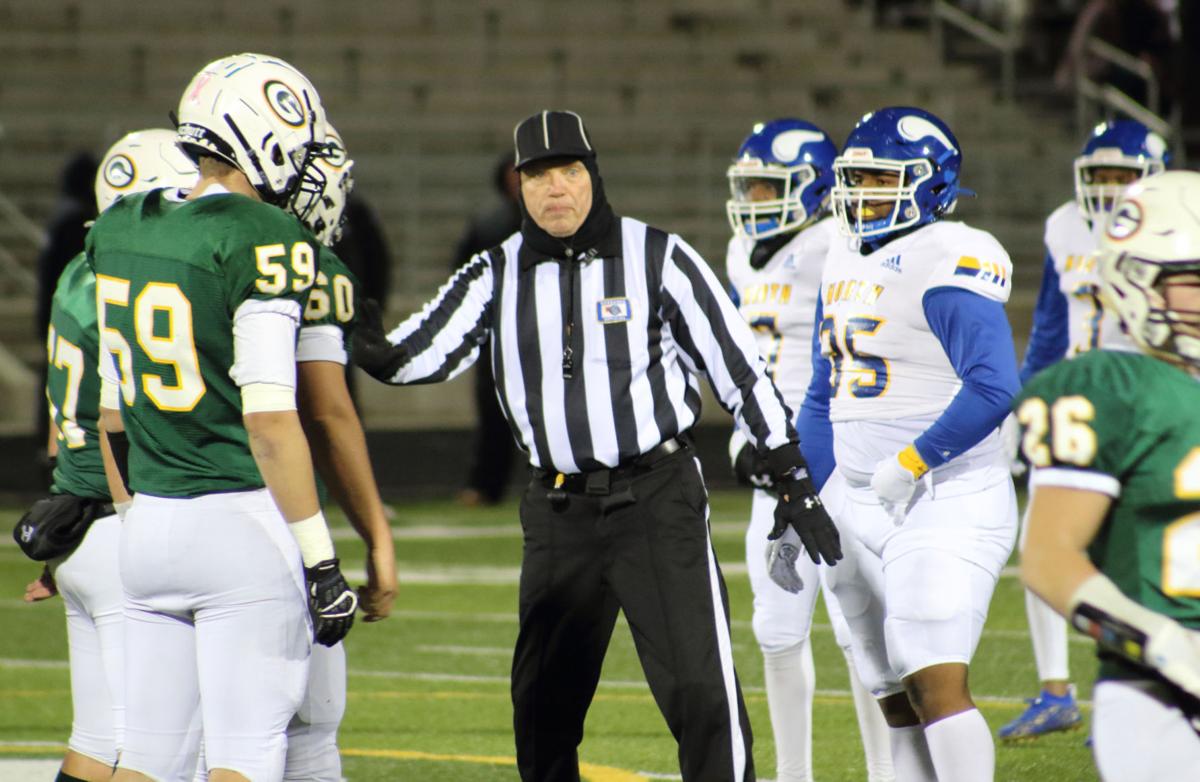 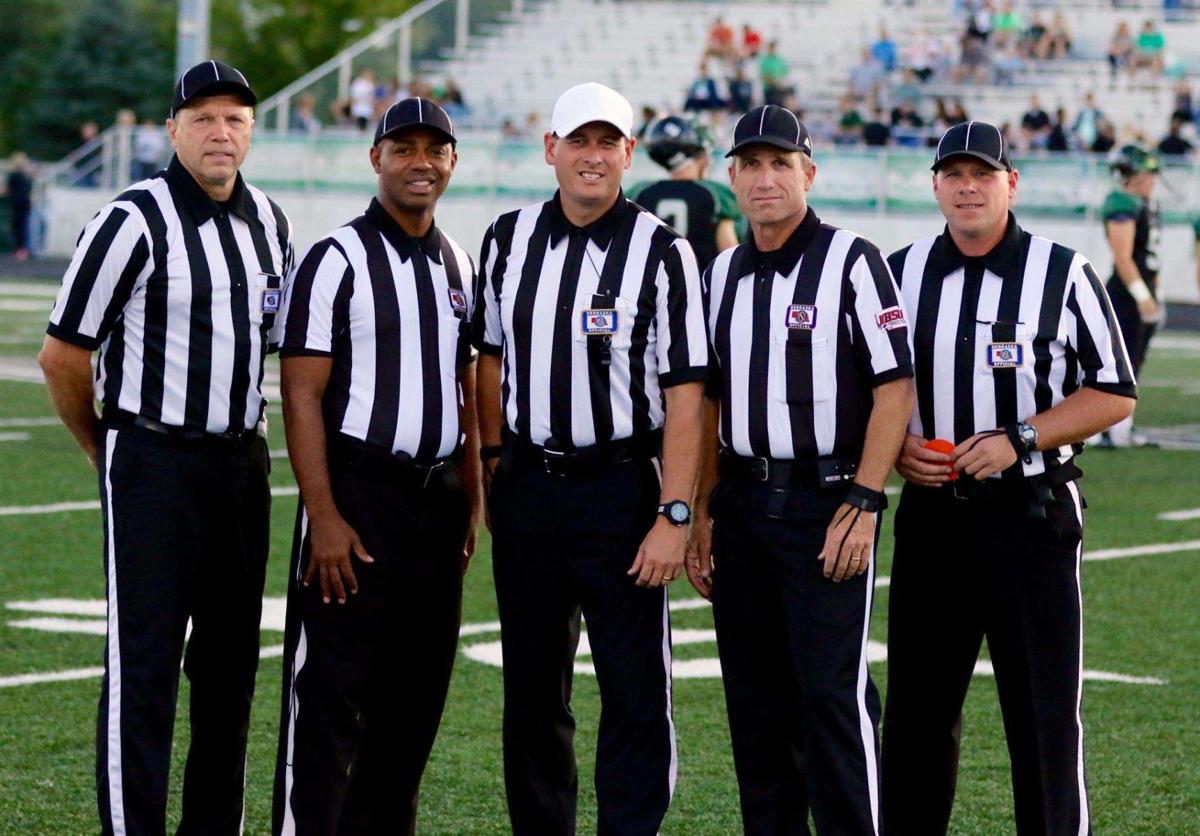 Mark Legband, far left, stands with other referees at a state play-off game in 2019.

Over his 32-year career as a referee, Mark Legband remembers one particularly cold football game he worked, a Kansas State University match in Boulder, Colorado.

“One of the Kansas State players stood in front of the heater so long he started melting his pants,” he said. “So you see things like that and it’s kind of funny.”

“It’s just been very enjoyable,” he said. “It’s almost tempting to keep going, but I think it’s time to take a step back and let some of the younger kids keep working.”

Legband, also a member of the Fremont City Council, got his start as a referee in 1989, when another teacher at Fremont Public Schools, Roger Nannen, asked if he would fill an opening.

“I said, ‘Sure,’ and I’ve never looked back. It’s been a blast,” he said. “And I’ve been very privileged to work with a lot of good people, and our crews have always been very good and very professional, and I’ve just loved it.”

Legband said he got into refereeing easily, as he watched how coaches reacted and handled different situations from the sidelines.

“At first, the games seemed to go fairly fast, but having been a coach and looking for certain aspects, it really came to me quite easily and I’ve really enjoyed going out there and working the games,” he said.

Although football has been his main sport, Legband also refereed many years in basketball after he quit coaching the sport. He also acted as umpire for baseball, which was a summer job while he wasn’t teaching.

“I’ve really enjoyed working with the kids and being able to go out there and talk to them, staying involved in sports,” he said. “It’s been a lot of fun for me.”

As a referee, Legband said he’s learned that not all of those watching the game realize that the rules differ between high school, college and NFL games.

“Sometimes they yell, ‘He wasn’t offsides,’ or little things like that where you just know on Saturday it may not be a penalty, but on Friday night it is,” he said.

Throughout the years, Legband said he’s trained himself to be able to block out much of the heckling coming from the crowd.

“When it’s game time, you have your responsibilities and you can’t really be focusing on somebody yelling things,” he said. “You have to be focusing on your job.”

Legband’s career as a referee also allowed him to work several games at Memorial Stadium as a sideline liaison and timeout official for the Big 12.

At one game against Kansas University, Legband remembered a game where the Huskers were far ahead in the lead and was told that a TV timeout would be held.

As he stepped onto the field to announce the timeout, Legband said head coach Glen Mason ran toward him as if to yell at him.

“He came up to me and then just shook his head and walked away because he knew I was just doing my job,” he said. “And so he didn’t say anything, but you could tell he was like, ‘We just want to get out of here, why are you taking a timeout?’”

And thinking back to that cold Colorado game, Legband said he also remembered being approached by several Big 12 officials as he bundled up to prepare for the single-digit weather.

The officials, Legband said, were from Texas and didn’t bring gear for the cold, which he had to relay to the Colorado head trainer.

“He just started laughing and he goes, ‘I’ll take care of them,’” he said. “So he came in and brought those guys a bunch of cold weather gear.”

On his decision to retire as a referee, Legband said his body was starting to tell him that it was time to pull back. He called his last game in Gretna on Friday “bittersweet,” as his fellow referees wished him the best.

“That’s the main thing in football: You have a group, you have a crew you work with,” he said. “And I’ve been lucky enough to have great guys I’ve worked with and enjoyable guys. The camaraderie has been great.”

As he steps down as a referee, Legband encouraged those who want to stay involved with athletics to give it a try themselves.

Legband said his 32 years as a referee has kept football as a part of his life and has enjoyed interacting with the many athletes and coaches.

“I’ve been lucky enough to work a lot of different stadiums and the atmosphere in a lot of these places have been just outstanding,” he said. “And it’s been just a lot of fun to keep involved, and I guess that’s just the main thing, is it kept me involved in football and sports.”

Fremont-area calendar of events for Nov. 18-20

Mark Legband, far left, stands with other referees at the state football championship game at Gretna High School Friday. The game was Legband's last after spending more than 30 years as a referee.

Mark Legband, second from right, stands with other referees at a state championship game at Memorial Stadium in 2018.

Mark Legband, far left, stands with other referees at a state play-off game in 2019.