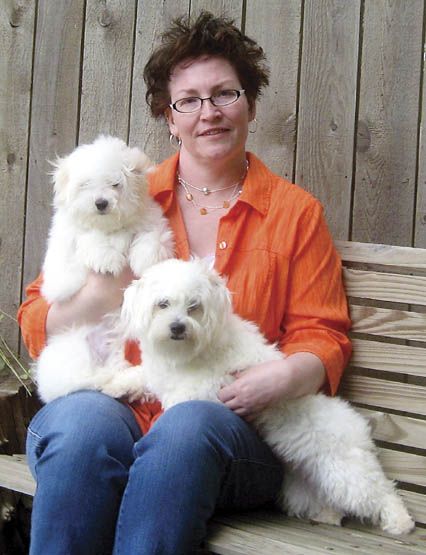 Barb Lierman with two of the Coton de Tulears that she breeds at her near Lyons. Lierman has sold dogs to people across the country, including Maxwell, who will be the figurehead of a new line of puppy treats called Maxwell's All-Natural Party Treats (Courtesy) 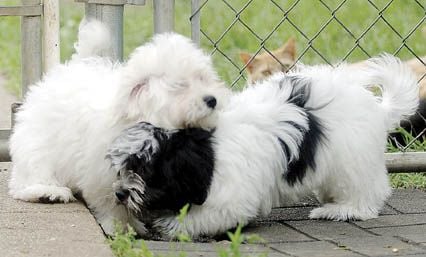 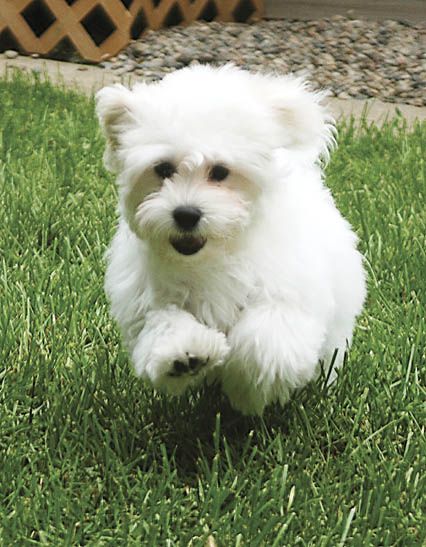 Barb Lierman has babies all over the United States.

And she keeps track of them with colorful push pins that dot a map in her Lyons office.

Lierman’s babies are actually puppies she’s raised and sold as pets to owners who include a Las Vegas illusionist, a doctor of alternative treatments and the owners of a trucking company. Puppy pictures fill a large bulletin board over her desk. Nearby, two of Lierman’s babies scamper across the floor to greet a visitor.

It’s definitely time for a puppy break at Heartland Classics and a guest who picks up a Coton de Tulear is likely to notice how wiggly and snuggly the dogs can be.

Lierman sells more than one breed of dogs, tracing her experience back to her 14th birthday when her parents, Dwaine and Judy Heithusen, bought her a pair of bichon frises. When she and her husband, David, married in 1987, they got their own pair and raised the little dogs. Two years later, she graduated from college and began teaching fourth grade at Oakland Public Schools.

Then on Memorial Day in 1991, three tornadoes combined and swept through their rural Lyons home, injuring David, who became a paraplegic. Barb, who was eight months pregnant, went into premature labor, giving birth to their son, Alex, born with disabilities.

Barb continued teaching and David went back to school, earning an accounting degree.

David now works for Midwest Veterinary Services. Barb would teach for 15 years, but after a while began feeling like she wasn’t where she needed to be. Becoming a dog breeder allowed her to stay at home; she opted to start raising a more rare breed of dog.

Her pick was the Coton de Tulear, a member of the bichon family that originated on the island of Madagascar. Coton is the French word for cotton and Tulear is the port city where the little dogs first roamed. Able to protect themselves from alligators because the little dogs were good swimmers, these cuddly canines have downy hair and deep-set eyes. Lierman said they’re known as anti-depressants in Madagascar because of their lively personalities.

“They have a joyful personality and are an extremely healthy breed with basically no known health problems,” she said. “They’re extremely smart. They’re not barkers or yappers. Because they’re in the bichon family, they’re a non-shedding, low dander dog and wonderful for allergy sufferers.”

Lierman said she litter box trains the puppies, which works well because many of their owners are older people who live in an apartment or condominiums. She said her puppies have gone to 49 of the 50 United States and the Czech Republic, Mexico, Canada, Japan, Puerto Rico and Denmark.

She got her first Cotons from the Ukraine.

“The AKC (American Kennel Club) is keeping pedigrees in stud books on the breed although they don’t recognize them as a full breed and you won’t see them on the dog shows you see on TV, because they’re still a rare breed,” she said.

Cotons are registered and recognized as a breed by the United Kennel Club, the nation’s second largest breed registry.

“Our dogs are registered with both,” she said.

Lierman also said she’s a member of the Better Business Bureau and is licensed and inspected by the State of Nebraska and the AKC. She added that she has a waiting list for puppies.

“Our place is very busy,” she said.

The Liermans’ son, Alex, lives in a group home in Lincoln. They have a daughter, Colbi, 14, and son Taylor, 12, and their friends like to come over and see the puppies.

They’re not the only ones who enjoy the little dogs.

A dog named Maxwell will be the pup whose picture is shown on a new brands of doggy goodies called “Maxwell’s All-Natural Party Treats.” One couple named their trucking line after their dog. The line is called Calvin Carriers LLC. Another of Lierman’s puppies now goes to work each day with a doctor of alternative treatments who works with cancer patients.

One of Lierman’s puppies, Indy, went to a Las Vegas illusionist and his wife, who is a hypnotist. The little dog is part of the man’s act and is on Princess Cruise Line ships. Indy also will be part of performances on Nickelodeon and Disney cruises and has been on the Travel Channel and Animal Planet, Lierman said.

Lierman had the opportunity to see Indy’s home.

At approximately 8:15 a.m., Dec. 1, Pedro Hernandez-Vicente, 61, of Fremont was arrested on suspicion of driving with a revoked license follow…

Sheriff Hespen Gives Letter of Resignation At Board Meeting

Sheriff Steven Hespen gave his formal letter of resignation to the Dodge County Board of Supervisors on Wednesday.

At approximately 10:45 a.m., Dec. 1, Dale J. Gore, 39, of Fremont was arrested on suspicion of driving with a suspended license following a tr…

Barb Lierman with two of the Coton de Tulears that she breeds at her near Lyons. Lierman has sold dogs to people across the country, including Maxwell, who will be the figurehead of a new line of puppy treats called Maxwell's All-Natural Party Treats (Courtesy)

Shae, a female Coton de Tulear, bounds through the backyard of her owner, Barb Lierman's house. Lierman took to breeding Coton's after 15 years of teaching. (Chris Bristol/Fremont Tribune)
© Copyright 2021 Fremont Tribune, 135 N. Main St. Fremont,NE | Terms of Use | Privacy Policy | Do Not Sell My Info
Powered by BLOX Content Management System from TownNews.com.
You don't have any notifications.