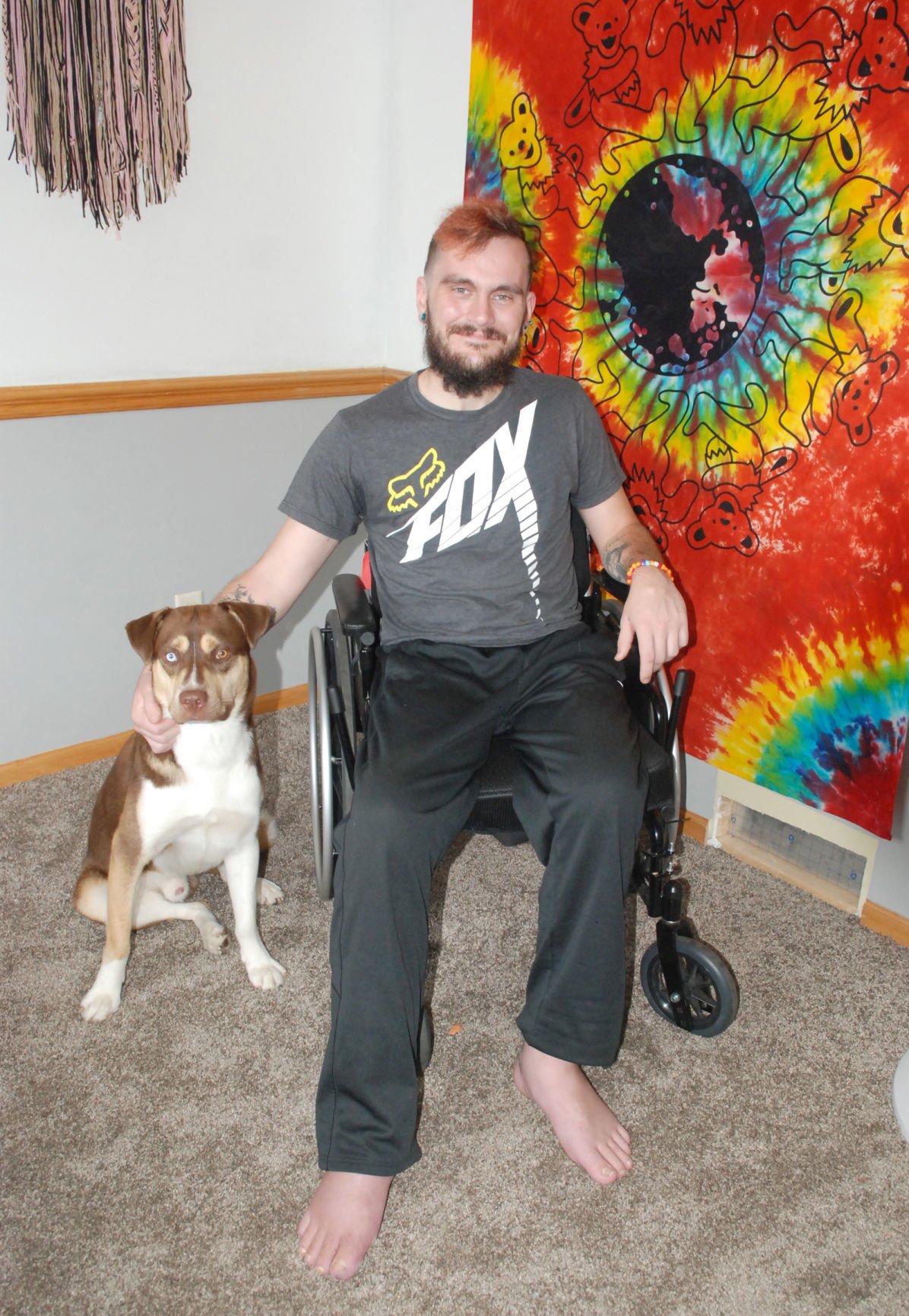 Zachariah Petersen is shown with his ever-vigilant dog, Coco, in Fremont. The man survived a helicopter crash in Arkansas in June. 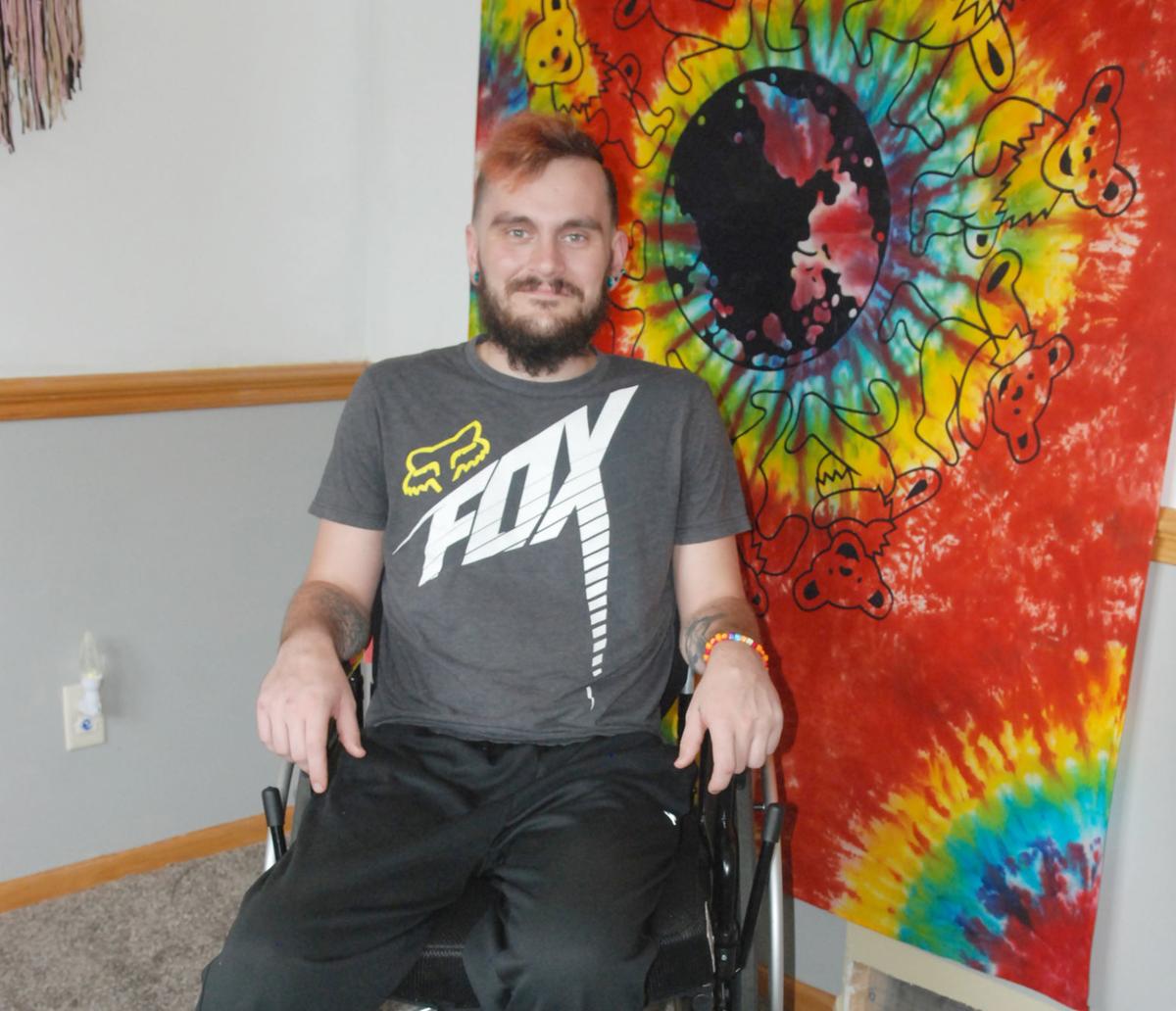 Zachariah Petersen is recovering after a helicopter crash in June in Arkansas. He is living in Fremont as he recovers. 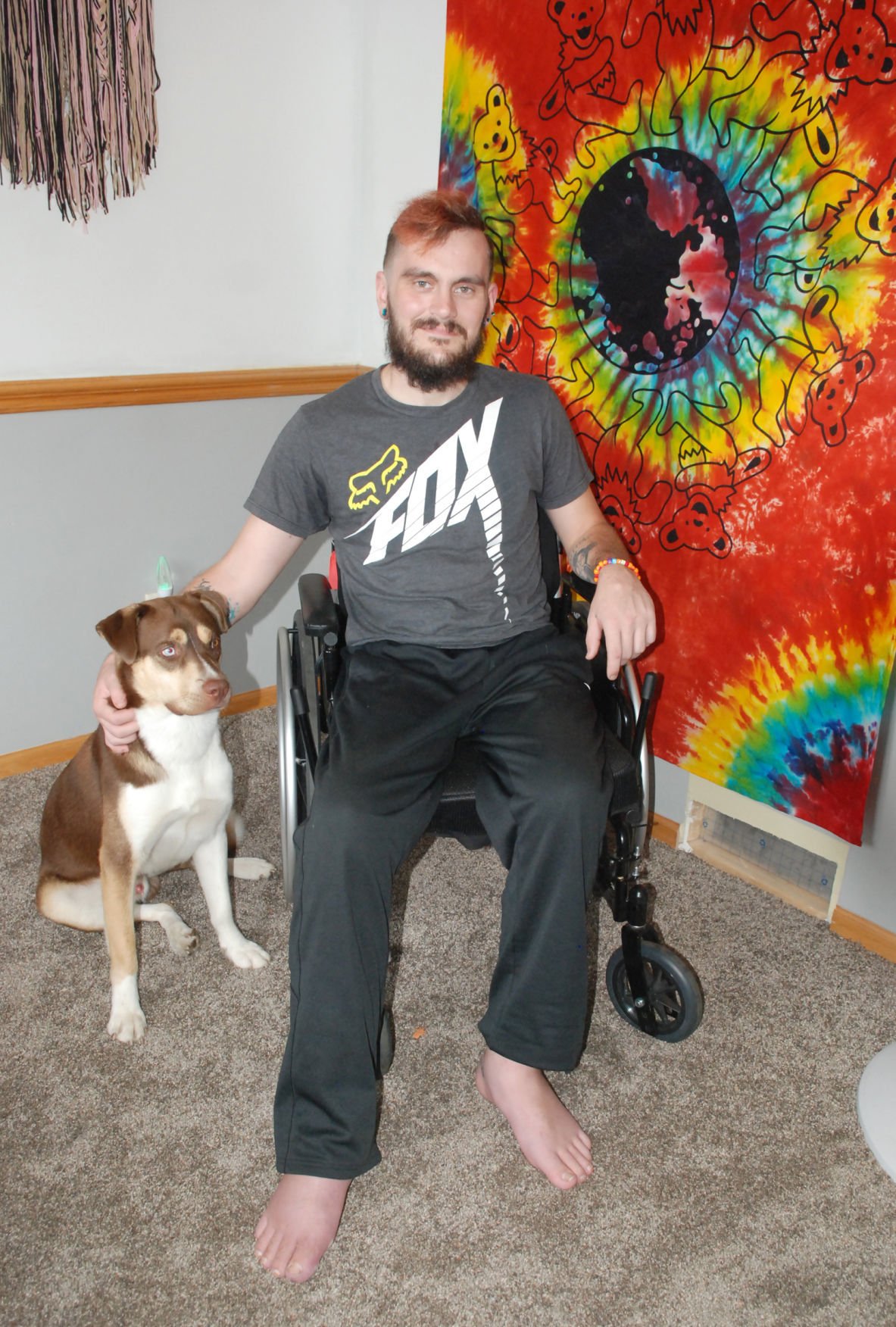 Zachariah Petersen is shown with his loyal dog, Coco, in Fremont on Monday. The local man is recovering after surviving a helicopter crash in Arkansas in June.

Mental snapshots of getting married, the births of his children, the first wrestling match he won flashed by in rapid succession.

“I wished I could have kissed my kids, hugged them again. Wished I could tell them I love them, one last time,” he said.

Then everything went black.

Three months later, the 24-year-old man was sitting in his mom and stepdad’s kitchen in Fremont. Petersen is in a wheelchair, but anticipates being able to walk again.

Petersen has another goal: He wants to become a public speaker, sharing what he knows is a miracle and a second chance from a merciful God.

“God made me remember it for a reason, I believe,” he said of the crash, noting that others who’ve had accidents have no memory of what took place.

He remembers so much.

Last June, Petersen and a friend went to the Backwoods Music Festival at Mulberry Mountain in Ozarks, Arkansas. There, he took a 10-minute helicopter sightseeing tour of the scenic area.

He climbed aboard with two other passengers — festival workers Sarah Hill of Austin, Texas, and Marco Ornelas of Mexico — and longtime pilot Chuck Dixon, whom Petersen said was renowned for his flying skills.

“Never once did I fear anything, did I think anything bad was going to happen,” Petersen said.

Toward the end of the early evening ride, the group was coming over a peak about 500 yards from the landing site.

“That’s when the helicopter started chugging like your car does when it runs out of fuel,” he said. “The engine cut and we started dropping. We fell approximately 1,000 to 1,200 feet.”

He awoke amid the wreckage. Nearby, he saw a cell phone.

Petersen had one thought: “If I don’t get that phone, I’m going to die.”

“I pulled myself out of the wreckage and crawled about 7 or 8 feet. It took so much energy that I passed out with the phone in my hand and a short time later I started feeling raindrops hitting my face.”

Rain fell harder and Petersen knew he had to protect the phone. He made calls to 911, but the calls dropped.

“I laid there just waiting to die,” he said.

Then the phone, which was Hill’s, started ringing. One of her friends was calling.

“Help! Help! Please for the love of God help us,” Petersen said. “We crashed. Please help us.”

But the call gave Petersen hope. He made seven calls to 911. The final call lasted long enough for rescuers to ping his approximate location. He would be the sole survivor.

Petersen lost consciousness, then awoke. Everything was spinning and fuzzy. He heard someone calling his name.

“I started screaming as loud as I could,” he said. “I remember watching these two guys coming over this little bit of a berm and the look of terror on their faces.”

They put a tourniquet on his right leg and gave him IV fluids. Petersen thought he could walk, but when he lifted his leg his foot dangled like a wet noodle.

A first-responder gave him pain medicine. He began to hallucinate.

“You might want to hurry up,” he told a rescuer. “The trees told me I don’t have much time left.”

The rescuer looked at him.

He decided to keep quiet for a while.

Petersen said rescuers put him on a backboard and carried him for 2 ½ hours to find an opening in the trees. A Blackhawk helicopter was called in to airlift him out. The pilot buzzed the trees to break off branches and make a larger opening.

He remembers the Mennonite volunteer firefighters.

“They dove on top of me to protect me from the falling branches. I could feel the branches hitting them — to be that selfless,” he said, his voice trailing.

Petersen was placed in a basket and accompanied by a paramedic.

“When they lift you out like that, you don’t go in the helicopter. You stay underneath. It is terrifying,” he said.

He was set in a field, transferred to a medical helicopter and sedated.

“I was just freaking out, because I had just been in one of these and it almost killed me,” he said.

His condition was critical.

“Somewhere outside the hospital, they lost me,” he said. “When I got to the hospital, I had no pulse and my blood pressure was 40 over zero.”

That’s when he had what some might call a near-death experience.

He recalls walking into a circus-type tent with bodies on the ground in the dark place. People in hooded cloaks walked by; finally a couple looked at him. They looked like the figure of the long-jawed man in Van Gogh’s painting, “The Scream.”

One smiled, touched his shoulder and he collapsed on the ground where he was beaten and tortured.

“I truly believe I was sent to hell,” Petersen said. “There are no words I can use to describe how terrible it felt. There’s no way I could put it into an earthly meaning to describe it. It’s the most terrible thing I’ve ever experienced.”

Petersen asked God why he would let this happen.

Then all the figures walked away. He started crawling, reached forward and grabbed the flap of the tent.

“Everything turned to this bright white mist — and it was the most soothing, tranquil, perfect feeling,” he said. “It literally was the feeling of perfection. There are no words I can use to describe how truly blissful and amazing this felt.”

Things went black for a little while.

Petersen opened his eyes in a hospital room. His oldest sister was holding his hand. He lost consciousness again.

He’d be in a Tulsa, Oklahoma, hospital until June 26, then sent to Madonna in Omaha for rehabilitation.

His tibia and fibula in his right lower leg were broken. Petersen said his right hip was shattered and pelvis snapped in half. His lungs collapsed, three ribs were broken, his spleen ruptured, and he had pneumonia. Shrapnel had gone through his right armpit and pierced his chest cavity.

Petersen said he had a skin graft and also a free flap procedure, which involves muscle and tissue, at Nebraska Medical Center in Omaha.

When doctors performed the skin graft, they found a staph infection in his tibia. He was allergic to the first antibiotic he was given. Petersen said he ran a 104.7 degree temperature and was shaking.

Petersen returned to Madonna for rehabilitation to gain range of motion in his leg, knee and ankle, and learn how to get in and out cars and complete other tasks. He’ll need a hip replacement in 10 years.

In a year, Petersen said he’ll be able to walk short distances around the house.

He’s living with his mom and stepdad, Melissa and Scott Ball of Fremont.

Petersen and his sisters, Seraea Crandall and Tanya Limbach, went to Fremont’s Trinity Lutheran School. He has two sons, Jacob, 5, and Bryce, 3. He owns a general contracting company, Zapp Services in Omaha.

Looking back, Petersen said he’s amazed by all the miracles that happened even with the first-responders. One volunteer knew the area, because he deer hunted in it. Another worked with a Blackhawk unit for the Arkansas National Guard and called them. If there hadn’t been flooding in the area, the Blackhawk wouldn’t have been on standby.

“We never would have been to the hospital in time,” he said. “So many things fell in place that you can’t chalk it up to luck or just a coincidence.

“There’s no other way to describe it, besides an act of God,” he said, mentioning a first-responder told his own mom: “Do you believe in God? Because if you don’t, you’re about to.”

The crash would bring a course correction to Petersen’s own flight plan.

“It gave me a new aspect on life. I was going down a very rocky path.”

“I got a glimpse to see what was in store for me for eternity,” he said. “I disprove the theory of YOLO — You Only Live Once. I literally got a second chance at life. People always talk about the second chance God gives us — sending Jesus and dying for us. Well, he took my second chance a step further.”

School board hears about proposed video display board

Members of the Fremont Public Schools board of education heard about a proposal for a video display board for the Al Bahe Gym.

When floodwaters inundated the Waterloo area last spring, Billy Hirschman and his wife, Taylor, evacuated with their young children.

Lunch menus for the week of Sept. 16

Before Troy Anzalone made a Yukon River trip, people kept saying he was going to be eaten by a bear.

The 2019-20 Sinai Festival Sounds Series will begin Sunday with a performance by Palladium Brass. The concert is set for 3 p.m. at Sinai Luthe…

Man to share music and message for grieving people

Keene Memorial Library, in cooperation with Humanities Nebraska, will be hosting a program at 7 p.m. Sept. 24 about the women and their impact…

Kelsi Anderson talks about the nudges.

40 respond to call of man trapped in grain elevator

Zachariah Petersen is shown with his ever-vigilant dog, Coco, in Fremont. The man survived a helicopter crash in Arkansas in June.

Zachariah Petersen is recovering after a helicopter crash in June in Arkansas. He is living in Fremont as he recovers.

Zachariah Petersen is shown with his loyal dog, Coco, in Fremont on Monday. The local man is recovering after surviving a helicopter crash in Arkansas in June.