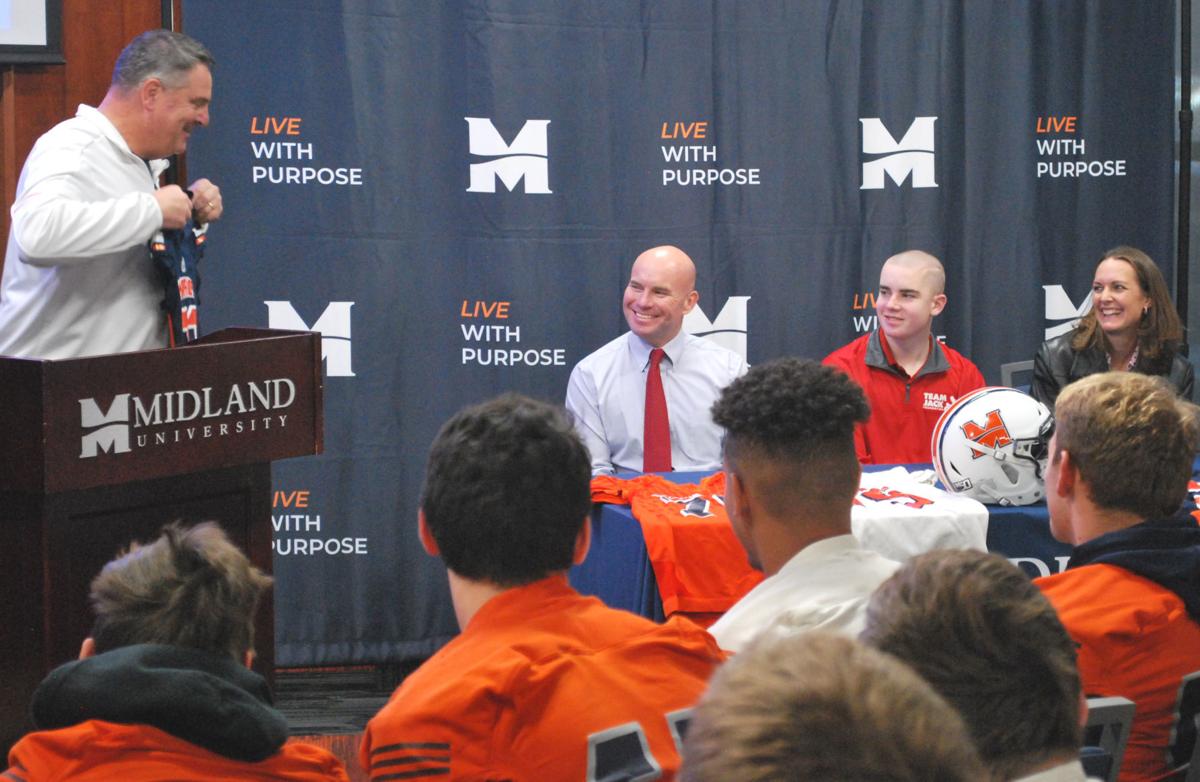 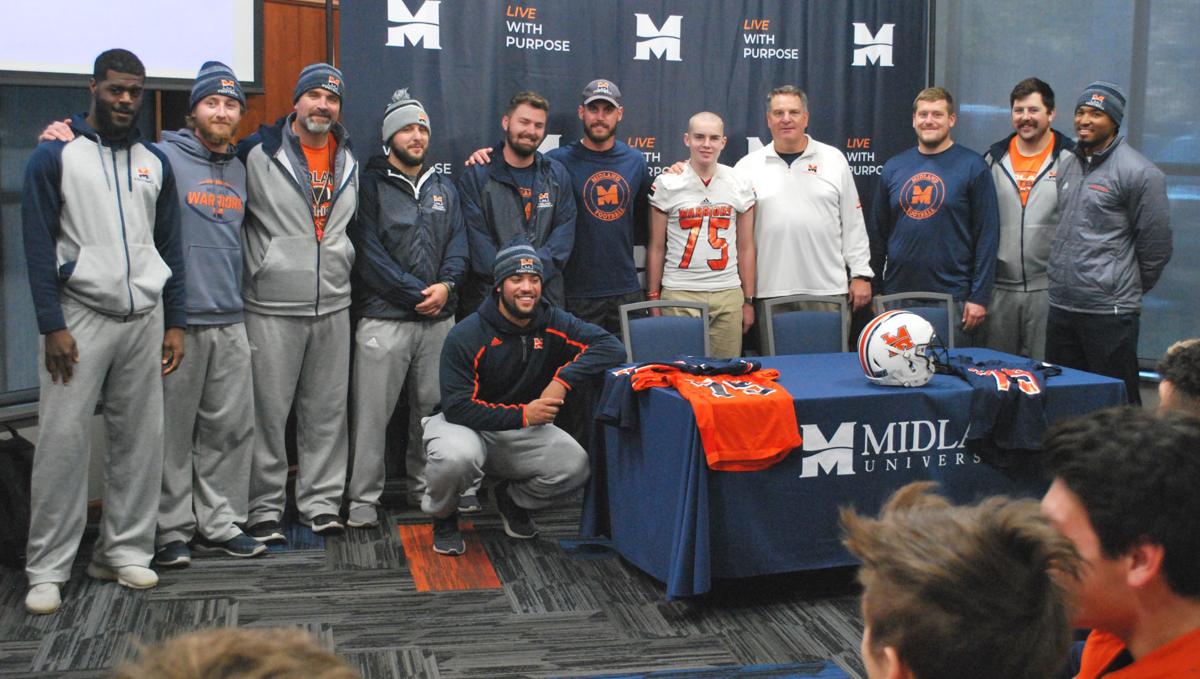 Jack Hoffman made headlines in 2013 after the 7-year-old made a 69-yard touchdown at the Nebraska football team’s spring game.

Hoffman, who was diagnosed with brain cancer at age 5, became the namesake of the Team Jack Foundation, founded by his parents, Andy and Bri, to raise money for pediatric brain cancer.

Now 14, Hoffman has already gotten a head start on his college career after being offered a four-year, full-tuition scholarship to Midland University.

“Everything that our program’s about here at Midland, that’s who he is, and I couldn’t be more proud to have administration step up to the plate,” Midland head football coach Jeff Jamrog said. “We know you’re going to probably have other options, but I’ll tell you this: No one’s going to recruit you harder than us.”

Jamrog presented the scholarship to Hoffman at a meeting for the football team on Thursday afternoon. Hoffman and his parents attended the event.

Hoffman received a standing ovation by the football players as he was presented different jerseys from Midland.

“Our goal is to build a championship-level football program with leaders who thrive in the community, classroom and on the field of competition,” Jamrog said. “If you choose to accept this offer, you are committing to excellence not only athletically, but in all aspects of your life.”

Jamrog was critical in getting Hoffman to participate in the 2013 spring game during his time as an assistant coach with former coach Bo Pelini.

When talking with former assistant coach Rich Fisher over ideas for the game, Fisher said he wanted to have a Make-A-Wish child take part, and Jamrog decided to see if he could get Hoffman on the field.

After asking Pelini, Jamrog called former player Rex Burkhead, who had befriended Hoffman in 2011, the night before the game. Burkhead then directed Jamrog to Andy Hoffman.

Jamrog and the other coaches thought Hoffman would make about an eight-yard run and were shocked to see the 69-yard run.

Hoffman’s run led to a 2013 ESPY Award win, a meeting with former President Barack Obama and the creation of Team Jack, which has raised more than $8 million so far.

“We are the Midland University Warriors, and when you think of ‘warrior,’ in the dictionary should be Jack: the ultimate warrior, the epitome of battling cancer with courage and grace,” Jamrog said.

Jamrog said Midland was impressed by Hoffman’s grades in school, accomplishments on the football field and character in everything he does.

“Our scholarship is offered contingent upon meeting Midland University’s requirements for admission and your continued display of character and leadership,” he said. “We hope you accept this offer as you would be a great addition to the Warrior family.”

Hoffman said he was thankful for Midland’s offer for the scholarship. Although he hasn’t been to many universities yet, he had two words to say: “Go Midland.”

“Not a lot of kids get to go on college campuses, let alone go inside and see one, so I thought it was pretty darn cool,” Hoffman said.

Andy Hoffman thanked the university and was appreciative of Jamrog getting his son on the field and offering him the scholarship.

“With Coach Jamrog’s efforts when he was at Nebraska, or Coach Pelini or Rex and all of those guys, we were able to have a platform to do what we were able to do,” he said.

Andy Hoffman also commended the players in attendance, saying that football was a big part of his family’s life.

“Coach Jamrog’s proud of you guys,” he said. “So good luck this weekend, kick some butt and we’re just really honored and humbled by this.”

Jamrog thanked Team Jack for the work that it has done and commended Hoffman for his character and courage.

“The countless hours and the trips back to Boston with Jack and all that he’s gone through, to tell you what, it’s touching,” he said. “There’s more to life than football, gentlemen, and this is a perfect example.”

Job’s Daughters’ Fremont chapter’s annual fundraising event is usually planned with a committee of members and a few adults.

What type of Halloween candy are you?