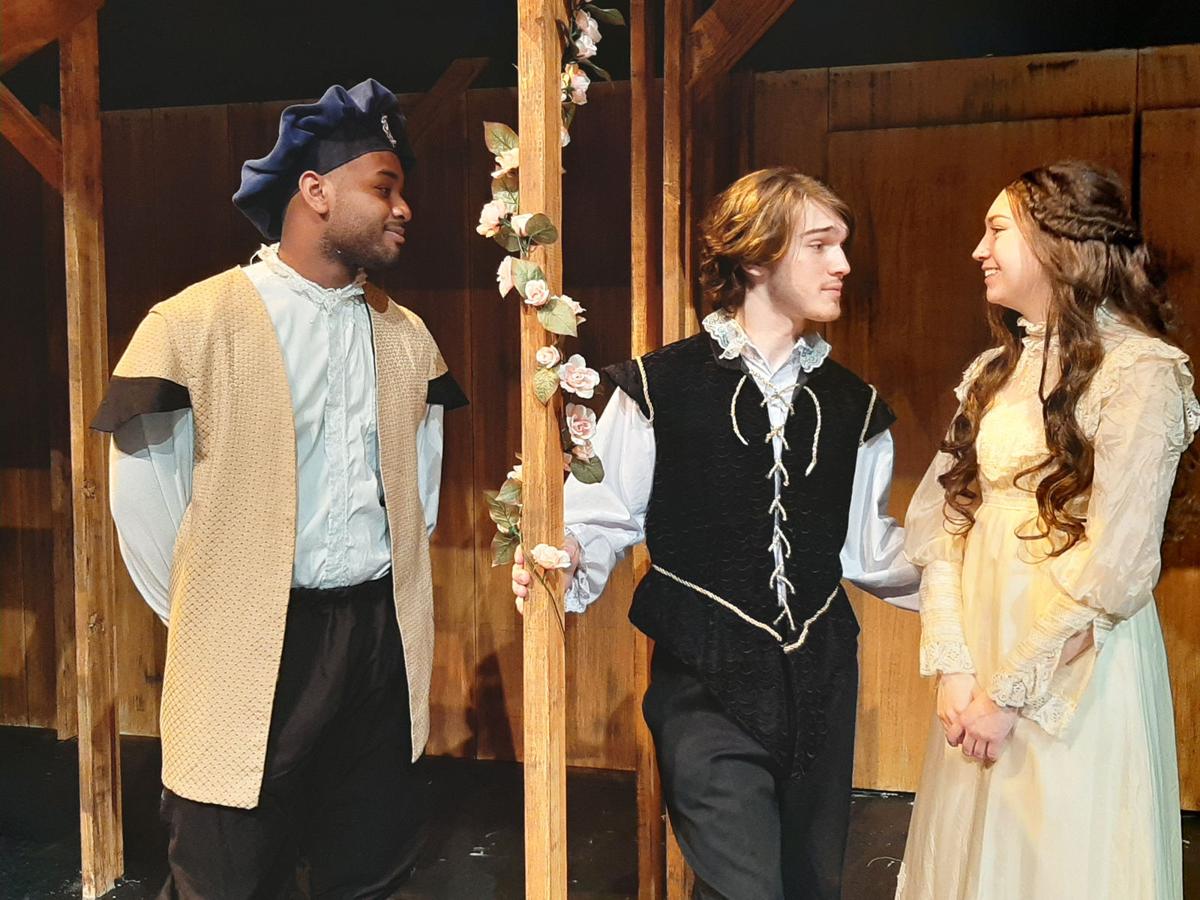 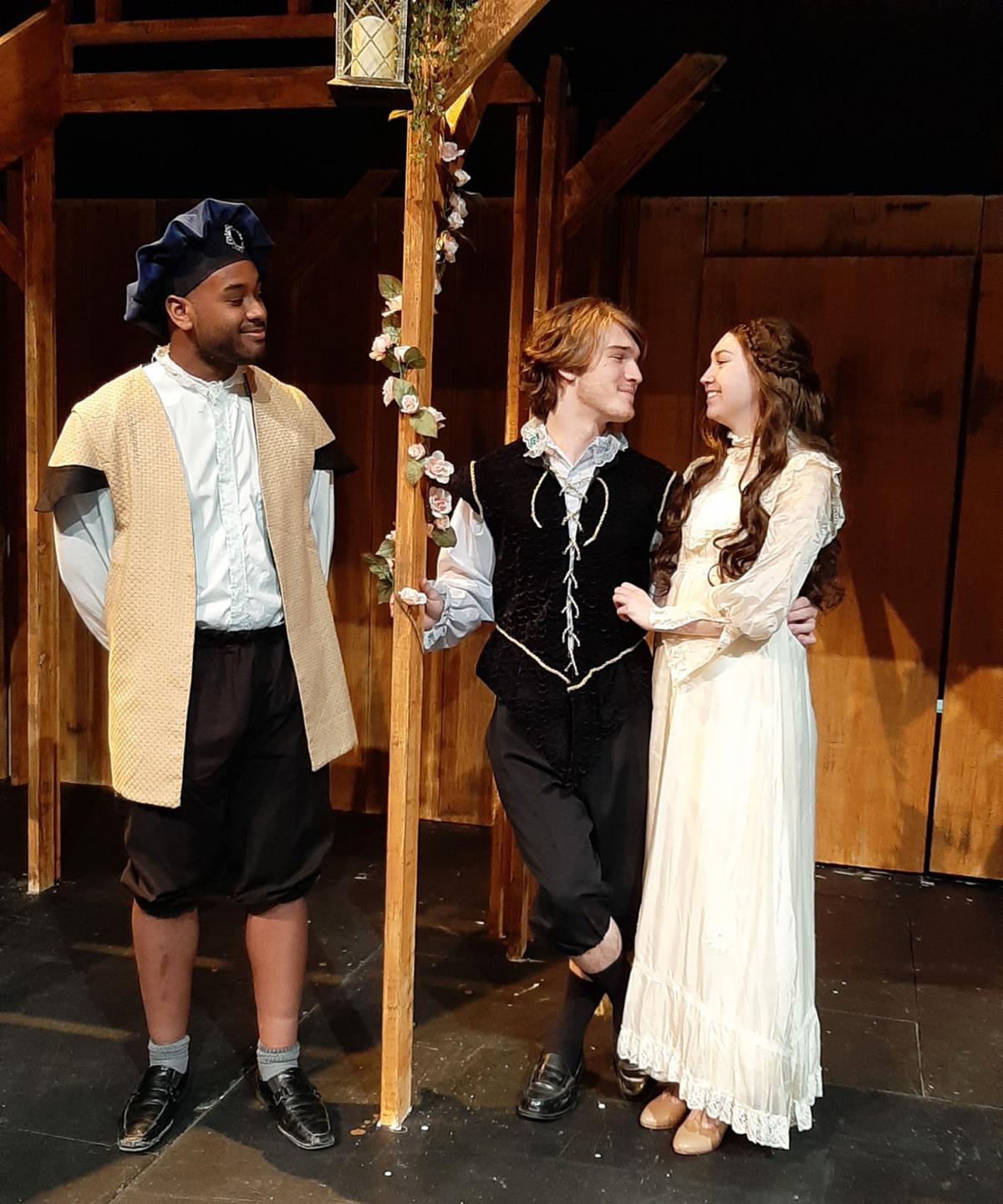 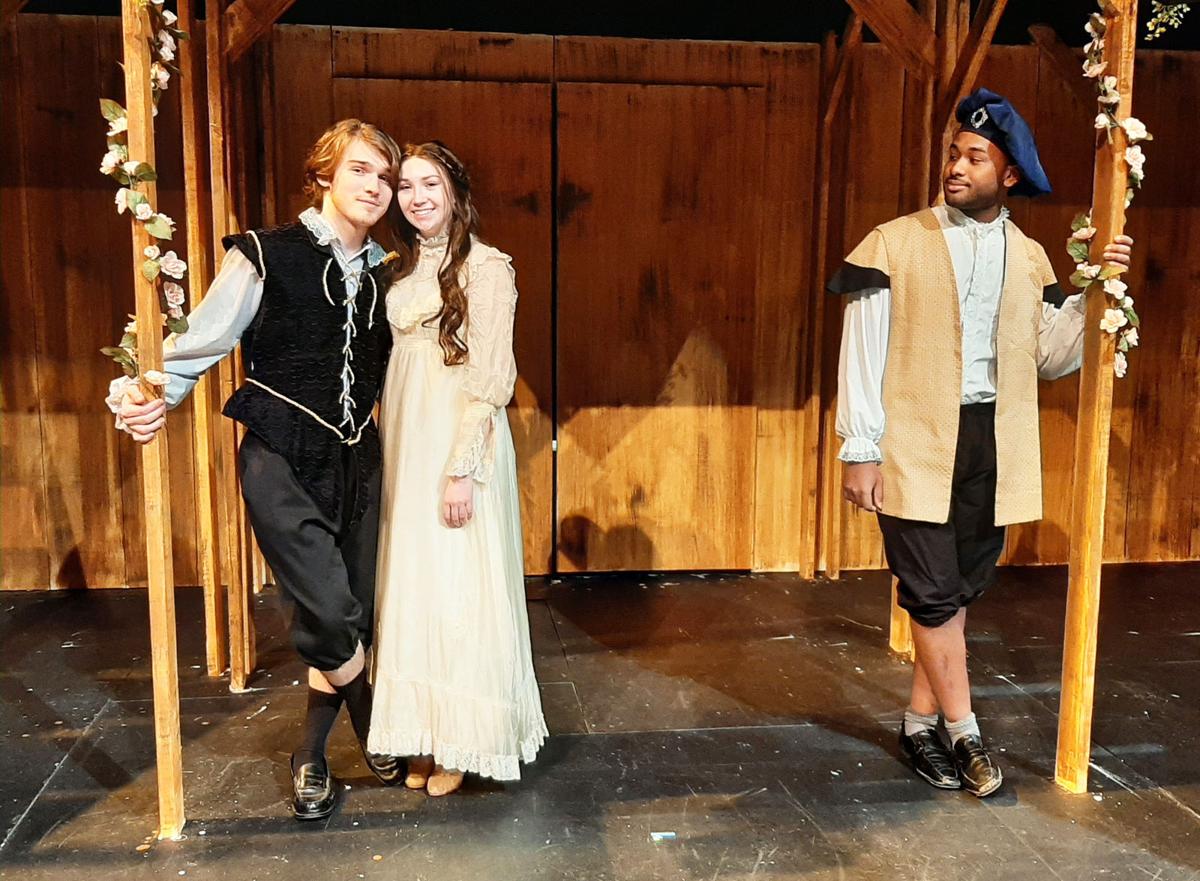 Will Yindrick and Reagan Gausman portray "Romeo and Juliet" in a new production at Midland University in Fremont. At right is Brian Neely, who portrays Romeo's cousin and friend, Benvolio. 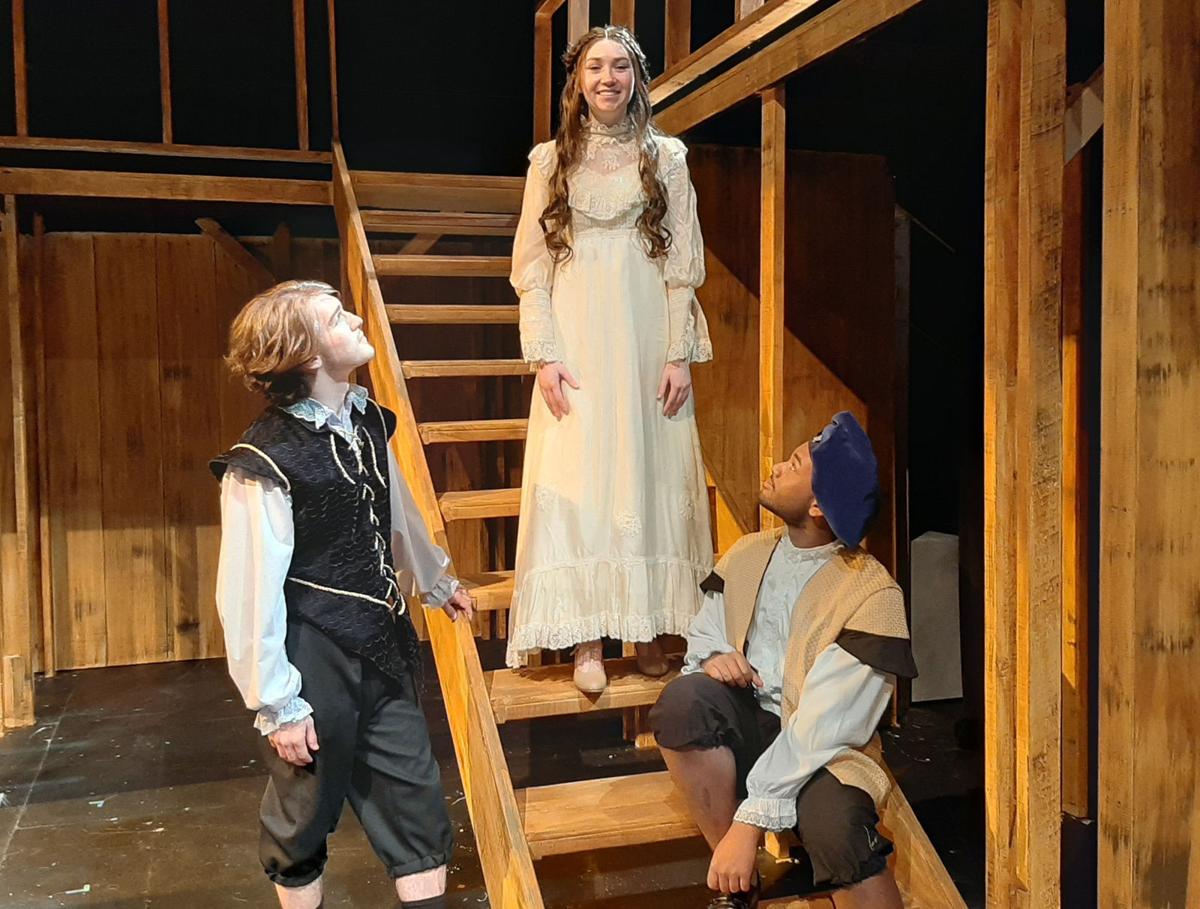 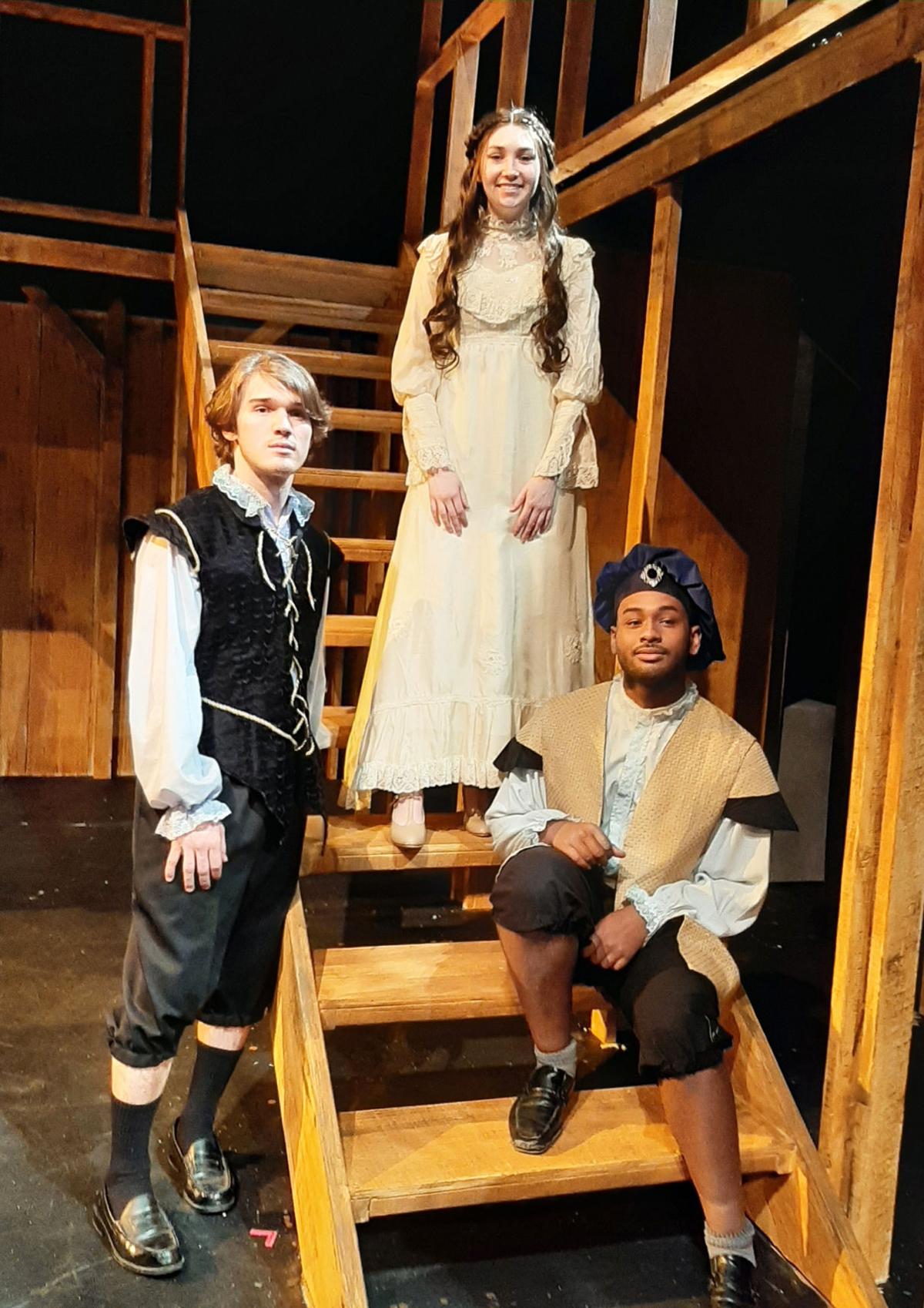 Reagan Gausman was a freshman when she saw a production of Shakespeare’s “Othello,” at Midland University.

Nebraska Shakespeare of Omaha was staging the great playwright’s work.

And Gausman was impressed.

“It was really beautiful,” said the sophomore from Columbus. “I’d never seen a show like that. It was amazing and it made me want to try it out.”

More than a year later, she’s trying out Shakespeare.

Gausman is one of the stars of the Midland University production of “Romeo and Juliet.”

The public is invited to performances of the classic love story at 7:30 p.m. April 22-24 and 2 p.m. April 25 in Kimmel Theatre on the Midland University campus.

In-person and livestream tickets are available for $10 for adults and $8 for students and seniors. Tickets may be obtained at https://midlandu.booktix.com/ or by calling the Midland Box Office at 402-941-6399 between 2-5 p.m. Mondays-Fridays.

Romeo and Juliet is the story of a young man and woman who fall madly in love.

There’s just one problem: Their feuding family members hate each other.

The two plan to marry, but misunderstanding lies ahead for what’s been called a tragic tale of star-crossed lovers.

Gausman is excited about the opportunity to be in a Shakespeare play. She sees Juliet as a young woman in a transitional period of becoming an adult.

“It’s a challenge to embrace both the childish and the adult aspects of the role,” Gausman said.

That said, Gausman appreciates all the thinking that young Juliet does and can relate to her feelings.

“I understand the feelings of wanting to be with someone and they become your world,” she said.

Yindrick, a sophomore from David City, likes the rollercoaster of emotions his character experiences.

At the start, Romeo is in love with a young woman who doesn’t share his feelings.

“I’m completely blue, because this woman doesn’t love me and I’m moping around,” Yindrick said.

Romeo is struck by a new love.

“He’s uplifted,” Yindrick said. “He then starts out on his determined quest to marry Juliet.

“The problem is their families are mortal enemies, so that kind of makes things difficult.”

After a bad turn of events, Romeo goes into exile.

“At that point, he’s incredibly distraught and broken at the fact that he must leave behind this woman who he has fallen so deeply in love with,” Yindrick said.

More emotions follow in a play about love, loss and, later, some reconciliation.

“I feel deeply and so I can understand the excitement of loving someone and how, like Reagan mentioned, people can become your world, so it’s understandable that given the circumstances how his emotions rise and fall,” Yindrick said.

“He wants the best for Romeo and everyone around him,” Neely said.

Neely appreciates Benvolio, who’s a good guy, striving to be a peacemaker.

“I like how he’s not afraid to fight for the people he loves,” Neely said. “I think I can relate to Benvolio in some ways, because Benvolio is very passionate about helping people and wanting to be a good friend and that’s something I try to do every day.”

Neely is a junior at Midland, who like Gausman and Yindrick, is majoring in arts management.

Neely said 18-year-olds and college freshmen are still learning about themselves and working on making friends. Sometimes they butt heads and — kind of like Benvolio — Neely can serve as a peacemaker.

“For me as an RA, I try to be their friend and help them to branch out and enjoy their Midland experience,” he said.

All three actors have done their homework when it comes to taking on their roles in this Shakespearean play.

Gausman watched a “Romeo and Juliet” movie and said she’s appreciated the background she’s gained from a theater history class. Neely has researched his character via YouTube.

Like other performers in the show, they’ve pored over their scripts.

“You have seven lines of dialogue to answer the question of ‘what’s up?’” Yindrick said, smiling.

Yet Yindrick describes the language as in-depth and poetic.

“You really get to hear almost every emotion a character is feeling at almost all the points throughout the show,” he said.

Neely has found the language challenging.

“It’s a good challenge, because the language they use in this show is so beautiful and there’s something so cool about trying to get what is being said in Shakespeare and understanding that and getting the audience to feel it,” he said.

Neely said he enjoyed reading Hamlet in high school and like Gausman and Yindrick, who also saw “Othello,” was impressed by that production.

“It helped fuel my passion for theater,” Neely said.

Dan Hays, director of theater for Midland, has tried to fuel his students’ passion for theater, while teaching them about Shakespeare.

“He brought in folios and quartos (leafs from books of that period). Those are original Shakespeare printings. So my students got to actually hold in their hands books that were probably held by Shakespeare and his company,” Hays said.

Hays sees the value of students getting to hold a piece of history.

He realizes that the words in a Shakespearean play can seem like a foreign language.

“But our students who have been involved in this production are embracing this and feel like they have gained a whole new set of knowledge,” Hays said. “Shakespeare is still one of the most-performed dramatists 1,600 years after his death.”

Hays tells why Shakespeare’s works have retained their popularity.

“His language is just unmatched,” Hays said. “Those are not original stories. He is not an originator of the stories, but he wrote them in a new, unique way that has lasted over centuries.”

Hays has been involved with many Shakespeare events, but this is his first time directing one of the Bard’s full-length plays.

“It was my goal to make Shakespeare understandable to everyone,” Hays said.

For example, characters make gestures, like a nurse who pretends to put on a wedding ring.

“We have worked painstakingly hard in our cast to make every moment understandable and I believe our audience will come to the show and will come away thinking, ‘I understood all of that show,’” Hays said.

Yindrick added that lots of things, including sword fights, happen in the show.

Neely also said shows can pull audiences out of their personal problems.

“They can enjoy this story and follow along with it and, in some ways, relate to it and it gives them a chance to appreciate Shakespeare and the power of theater,” Neely said.

“I hope it can inspire them to learn more and delve deeper into all the amazing things he wrote,” he said.

Work is beginning at the new terminal site at Fremont Municipal Airport.

The Bridge has Denim Days fundraiser

It’s a chance to draw attention to a cause and get to wear jeans to work at the same time.

Kylie Kampschneider hopes people from near and far will run — or walk — for a good cause.

Calendar of events for April 20-22

Find out more about area events and meetings planned for April 20-22.

Dr. Angela Sukstorf has a warning for the public:

Will Yindrick and Reagan Gausman portray "Romeo and Juliet" in a new production at Midland University in Fremont. At right is Brian Neely, who portrays Romeo's cousin and friend, Benvolio.