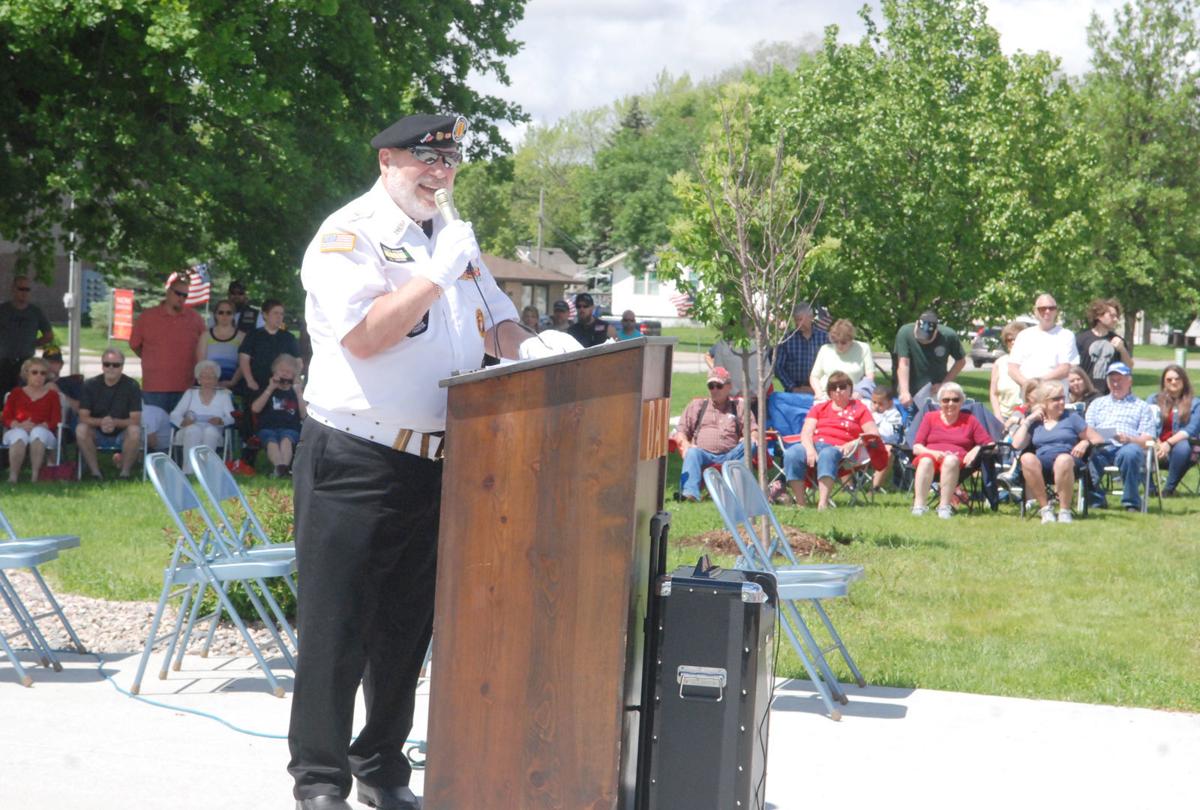 Disabled American Veterans Commander R.J. Riggs expresses appreciation to attendees of the Memorial Day service on Monday in the Veterans Park in Fremont. 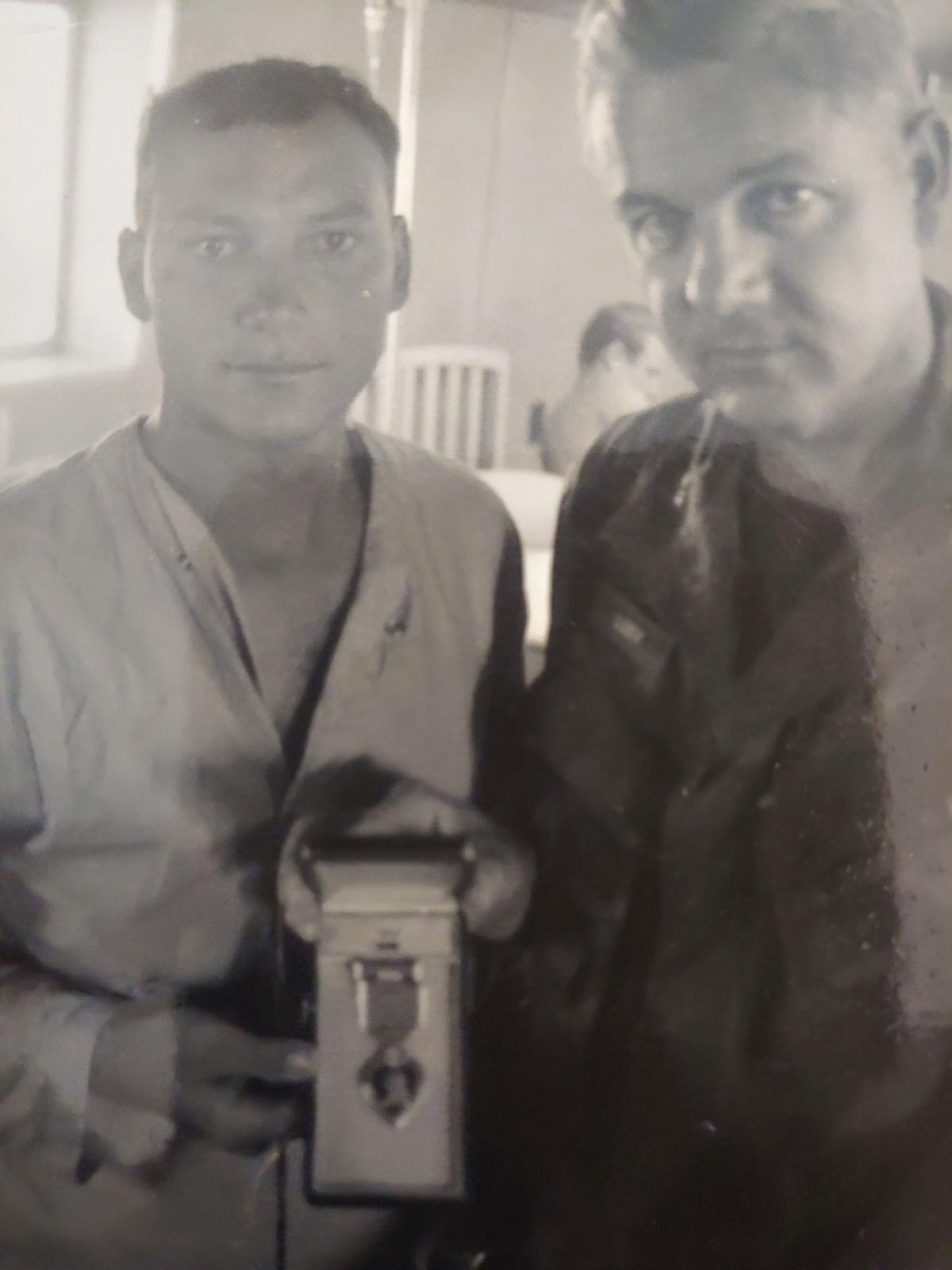 R.J. Riggs, a former Fremonter, is shown receiving his Purple Heart medal years ago. Riggs is a Vietnam veteran. 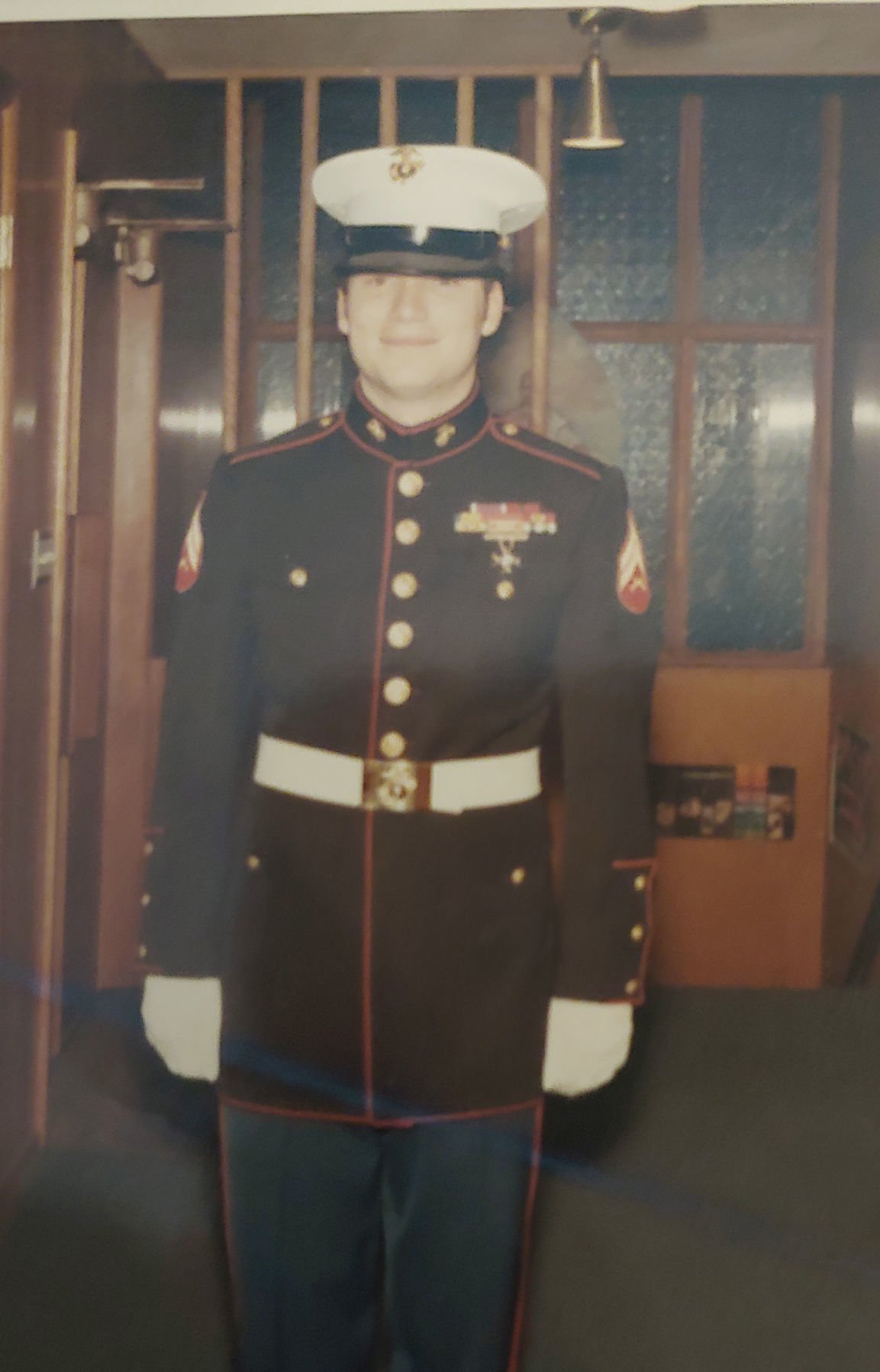 R.J. Riggs is shown in his military uniform years ago. Riggs, a former Fremonter, served in Vietnam in 1969-70. He is commander of the Disabled American Veterans, Joseph C.H. Bales Chapter 18 in Fremont.

The explosion blew Corporal R.J. Riggs off his feet.

Riggs was the squad leader of a security force guarding villagers watching a movie at Xuan Tra — 8 miles south of Danang, Vietnam. The movie talked about farming in America and how the United States could use modern technology to help people in this Southeast Asian country.

About 40 villagers were watching the film, when out of the corner of his eye, Riggs noticed an older woman from the village — right before she threw a grenade toward him and the radioman.

The radio man would lose his legs. Shrapnel hit Riggs’ forehead and legs as the attack began.

Almost 50 years after that attack, Riggs was in a very different setting — leading the Memorial Day service in Fremont.

Riggs is commander of the Disabled American Veterans, Joseph C.H. Bales Chapter 18 in Fremont. He became commander in 2018 and since has been re-elected to serve until 2020.

A commander can only serve two terms and then another person fills that position. Riggs doesn’t know if he’ll serve again after that, but wants to make sure the chapter — named after his uncle — will remain in good standing.

So Riggs and others in the chapter are recruiting younger veterans whom they believe will carry it into the future.

Riggs comes from a long line of military men. His grandfather served in the Marine Corps in France during World War I. His father fought under Gen. George S. Patton during World War II in Sicily and in North Africa against German General Erwin Rommel.

His uncle, Joe Bales, was in the U.S. Marine Corps and saw fighting in places like the Chosin Reservoir, Pork Chop Hill and Horseshoe Ridge during the Korean War.

Both Bales and Riggs would earn Purple Hearts during their military service.

Riggs said his uncle talked him into joining the Marines.

He and other Marines flew to Saigon, took a C130 plane to Danang and a truck to Quang Tri.

Riggs was among Marines who went out on operations, going from hill to hill.

“We had several skirmishes with the North Vietnamese Army, because we were right on the DMZ (demilitarized zone),” he said.

Riggs would lose a friend, Donald Pierce Jr. The two had gone to basic training and Vietnam together.

Pierce’s parents wrote Riggs and asked what had happened.

“It was hard for me to write that letter,” Riggs said.

Pierce had died when he stepped on a landmine, which exploded.

“It was very traumatic at the time,” Riggs said about his friend’s death. “You get angry and then you want to get revenge.”

Another time, a Marine with a grenade launcher was separated from his platoon. The man then got caught in a fire ignited by a homemade North Vietnamese Army device that was like a grenade.

The grenade had started a blaze in elephant grass (which grows 7 feet tall in Vietnam).

“He got caught up in the elephant grass and was burned to death,” Riggs said. “We could hear him screaming, but there was nothing we could do to get to him at the time. We carried his body back and had him helicoptered off.”

The men continued with many operations around the DMZ, trying to locate caches of military weapons and equipment and ammunition.

“There were tunnels everywhere and we’d blow those tunnels up. We’d go to villages and try to find V.C. (Viet Cong, Communist insurgent fighters). They’d always be hidden in tunnels and underground in villages. That’s where they would hide during the day,” he said.

One morning, Riggs said he and other Marines were around a hamlet and the sun was rising when he spotted a Chinese adviser and four other V.C. coming out of a village.

“We ambushed them and we took the Chinese adviser to our headquarters and they flew him down to Danang,” Riggs said. “He had a satchel full of money on him and other important papers that were useful for our intelligence. They went through the papers and found he was a Chinese soldier, who was a paymaster, paying the head of the V.C. in that province.”

In November — during the monsoon seasons when combat situations diminished — the enemy would try to strike at bridges, military bases and headquarters.

Thus, Riggs and other men were in charge of bridge security at the Cam Lo River.

“We would take turns walking up and down the bridge, looking to see what was floating down and if there was any kind of brush or bushes, you had to shoot at it,” he said. “You never had to be exact, because they (the enemy) would time you, so every 10 or 12 or 15 minutes we would throw a half a stick of C4 (plastic explosive) over the bridge.”

That would kill any enemy diver planning to put an explosive on the bridge.

The Marines even had to shoot dead bodies floating down the river, because divers could be under them.

Dead bodies of civilians, killed by enemy soldiers, weren’t uncommon. But it was hard to tell if they hit a diver in the fast-flowing river during the monsoon season, Riggs said.

The next year, Riggs thought he’d be leaving Vietnam when President Nixon pulled Marines out of that country.

That didn’t happen. Riggs was transferred from the Third to the First Marine Division, based in Danang.

In March 1970, he was promoted to the rank of corporal and chosen to train Vietnamese people to protect their hamlets when the Marines weren’t there.

At dusk on May 5, 1970, he was in charge of a 12-man squad providing security for a movie being shown at Xuan Tra.

That’s when Riggs noticed the woman, just before she threw the grenade in what later was described as a Viet Cong terrorist attack.

Although blown off his feet and wounded, Riggs and his squad fought off the attack from the hit- and run-enemy team.

“I think we killed three or four of their people,” he said.

“We had three (Marines) wounded, including myself, but I stayed with my position all that night,” he said.

Riggs got his men in a defensive perimeter, protecting villagers from further attack. He directed first aid treatment and called for a medical helicopter to evacuate the more seriously wounded civilians and Marines.

He’d earn a Department of the Navy Commendation Medal with a Combat V for Valor for his meritorious service from July 1969 to 1970, and particularly for his actions on May 5.

A document commending his actions states that: “Only after all other personnel were treated and evacuated did Corporal Riggs allow a corpsman to treat his wounds.”

Riggs was commended for his diligence, resourcefulness and devotion to duty.

Looking back, Riggs can see how his training kicked in despite his wounds.

“When I got hit with the shrapnel, it just felt like a bunch of gravel,” he said. “You’re fighting for your life and so you go right into what you were trained to do. You don’t think about it, you just react to the situation.”

Riggs was sent to a hospital in Danang, where he spent 23 days.

He returned to his unit and finished his time until he went home at the end of July.

Riggs would marry and have a child. He worked at Hormel Foods Corp., in Fremont until 1982. He then moved to California, where he spent 1 ½ years, but returned to Fremont after his mother was diagnosed with terminal cancer. She died in 1984.

He moved to Omaha and in 1985 began working for the U.S. Postal Service. He retired from the post office in 2016.

“We have some leaders now who were in Iraq and Afghanistan and Desert Storm,” he said. “Now, it’s their turn and they’ll take over this chapter and carry it into forward into the future.”

Facial recognition tech being tested for US flights

Facial recognition tech being tested for US flights

Christina Liekhus got a nice surprise on Friday.

Texans help in Fremont after flooding

The skies were gray and the air was humid and sticky as Jude Collins crawled under the mobile home.

When historic flooding hit Fremont back in March, out of the disaster emerged a great number of heroes.

The Fremont City Council will consider several items related to a proposed 216 unit adult apartment complex on N. Yager Road between 29th and …

Fremont Friendship Center will celebrate Flag Day at 10:30 a.m. Friday with Patriotic Panoramas with Panache. Donna Gunn will be the performin…

FPS could save $1.6 million from refinancing

NDOT hopes to reopen Highway 30 and 91 this weekend

Following months of detours after U.S. Highway 30 and Highway 91 were closed after sections of the roads were washed away during flooding in M…

Nearly three months after historic flooding washed away 30 acres of his cornfield, and piled three feet of sand over much of the remaining soi…

The Veterans Auxiliary will gather at noon Monday at Godfather’s Pizza in Fremont.

Now is the time to plan your Father's Day weekend

Does your dad love baseball, car shows or music?

Firefighters among VIPs at MDA camp

Nathan Arneal was in a unique position during mid-March flooding in North Bend.

This year, the Midsummer Festival at Elim Lutheran Church will have a western flair.

All good things must come to an end.

Disabled American Veterans Commander R.J. Riggs expresses appreciation to attendees of the Memorial Day service on Monday in the Veterans Park in Fremont.

R.J. Riggs, a former Fremonter, is shown receiving his Purple Heart medal years ago. Riggs is a Vietnam veteran.

R.J. Riggs is shown in his military uniform years ago. Riggs, a former Fremonter, served in Vietnam in 1969-70. He is commander of the Disabled American Veterans, Joseph C.H. Bales Chapter 18 in Fremont.