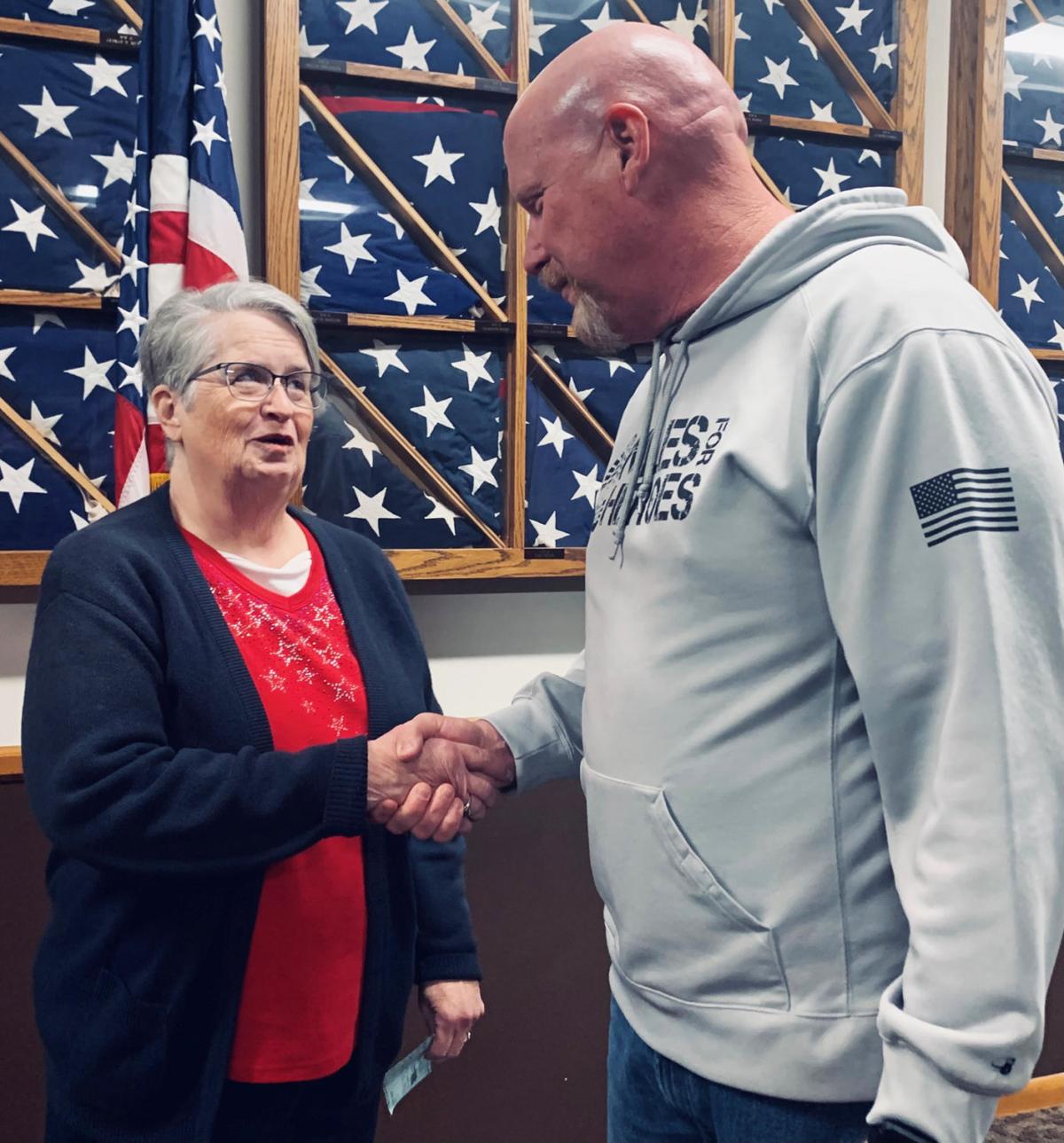 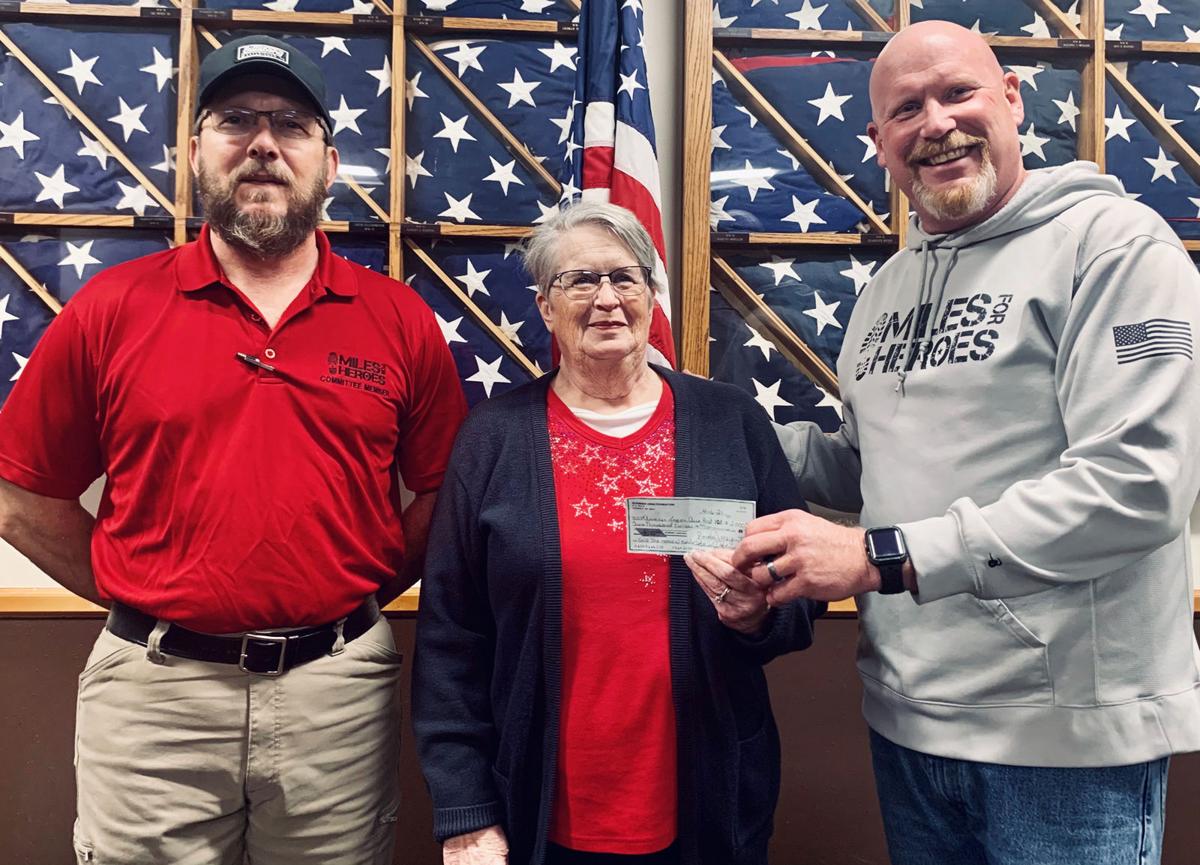 Scribner Chief of Police and Marine veteran, Jake Brainard, left, Carol Verbeek of American Legion Auxiliary, Jay Wormwood Unit 121, and Joel Marreel of Miles for Heroes are shown after the Heroes group presents a check to Verbeek for the Gold Star Mothers project.

Carol Verbeek’s quest to honor her grandmother became an endeavor to pay tribute to many moms.

By definition, Gold Star Mothers are Americans who’ve lost sons or daughters in service to the United States Armed Forces.

For years, the Scribner woman has worked with the American Legion Auxiliary, Jay Wormwood Unit 121, to raise funds to honor every deceased mother in Dodge County who had a child die while in active duty serving their country.

They pay special tribute to these mothers of fallen service members by placing a Gold Star Mother’s Grave Marker where each of the women is buried.

Funds for the marker project have come from a Scribner Foundation grant, the Fremont Area Community Foundation, donations from the auxiliary and Legion post and individuals.

Since starting the project, the group has honored 185 Gold Star Mothers.

But funds for the project ran out.

So Verbeek called Elizabeth Valla, Scribner’s economic development director, to find grants or ways to raise funds to catch up with the 77 more mothers they had in Dodge County.

Networking took place with a result that could be described as golden.

After hearing Verbeek’s request, Valla said she spoke with the town’s chief of police and Marine veteran, Jake Brainard.

He immediately had an idea, Valla stated in a press release.

Brainard called Joel Marreel with Miles for Heroes, an organization that raises funds for wounded soldiers.

Brainard and Marreel serve together on the organization’s committee.

Within 30 minutes after Valla and Verbeek’s phone conversation concluded, Brainard and Marreel had the request added to the next day’s committee agenda.

The next night, the committee called up Verbeek, telling her the good news.

“This is kind of in the wheelhouse for what Miles for Heroes does,” Brainard said.

Verbeek and her committee were pleased to learn they’d be receiving funds.

“The committee was extremely excited when we found we were going to be recipients,” Verbeek told the Fremont Tribune. “It was amazing.”

The next week, Marreel and Brainard presented Verbeek with the exact amount she needed to honor those 77 mothers, $2,000.

Verbeek’s unit has been recognized on a national level for it efforts in not letting the country forget the sacrifice these mothers made for this nation’s freedom.

A new plaque, dedicated to Gold Star Mothers, also will be added this summer to the Veterans Park in Fremont.

In a 2018 Fremont Tribune story, Verbeek said her grandmother was 36 years old when she died — prior to the time when two of her sons were killed in wars.

But she still earned the title.

Her son — and Verbeek’s dad — Teddy “David” Jones was 20 years old when enemy planes strafed the convoy he was in and he died in Germany during World War II. He was killed in October 1944.

Verbeek’s uncle, James Jones, was in the Army Air Corps (later the U.S. Air Force) at the end of World War II and was called back to duty for the Korean War.

James Jones was a tail gunner whose plane was shot down after a bombing mission.

“His body was never found although there were reports that he was a P.O.W. (Prisoner of War), but he was never repatriated,” Verbeek said.

The idea for the Gold Star project in this area began years ago after Verbeek saw information about the markers in the American Legion Flag & Emblem catalog. Verbeek decided she wanted a marker for her grandmother’s grave.

She also wanted a marker for her husband’s grandma, whose son died of tuberculosis during World War II.

Verbeek, along with her Scribner unit, is working to assemble a directory that will list all the names of the mothers, the child they lost, their child’s rank in the military, along with where their child is buried and if the mother is alive, and if not, where she is buried.

“I don’t want to do it halfway,” Verbeek said.

Those who would like to donate to the unit’s efforts may do so by sending donations to Gold Star Committee, 108 Eighth St., Scribner, NE 68057, or for more information, contact Valla at econdev@scribner-ne.gov.

The Miles for Heroes will have its annual fundraising event Freedom Fest on May 21 in Scribner. For more information on the bands, 5k and poker run, check out the Facebook page at Miles for Heroes or www.milesforheroes.com.

The Digg Site Productions has big plans for The Empress Theater

Richard Roeder remembers the day John F. Kennedy was assassinated a little differently than most people.

As a young businessman, Curt Goracke saw the value of preserving a downtown landmark.

Carol Bohling and Jan Ostransky have been seeing local interest in the Nebraska Nurse Honor Guard.

Dr. Angela Sukstorf has a warning for the public:

Calendar of events for April 28-30

Nickerson plans fundraiser events on May 1

The Nickerson Volunteer Fire Department and the Village of Nickerson are sponsoring events to raise money for the 2021 Nickerson 150th Celebration.

Friends of Keene Memorial Library are looking ahead to the Fremont Area Big Give on May 4.

Whether they were a good citizen or otherwise helped make the community better, area residents and people in two school systems were recognize…

She remembers the first symptoms.

Fremont Friendship Center menu for May 3-7

Find out what's on tap next week at the Fremont Friendship Center.

Scribner Chief of Police and Marine veteran, Jake Brainard, left, Carol Verbeek of American Legion Auxiliary, Jay Wormwood Unit 121, and Joel Marreel of Miles for Heroes are shown after the Heroes group presents a check to Verbeek for the Gold Star Mothers project.