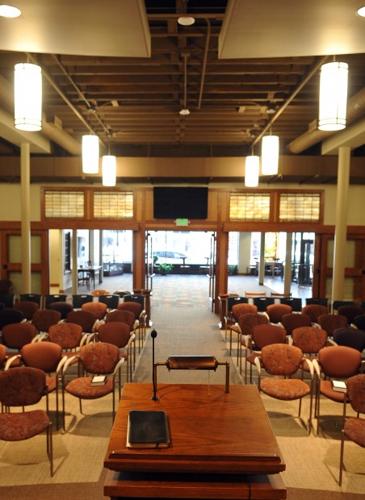 The activity of Sixth Street can be seen from the sanctuary inside Grace Church in downtown Fremont. 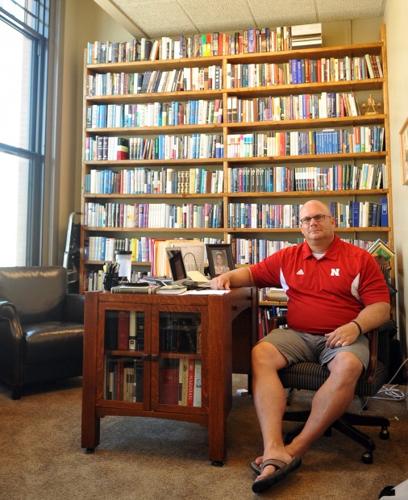 The Rev. Kyle McClellan takes a break from work in his office in the new Grace Church Thursday afternoon in downtown Fremont. 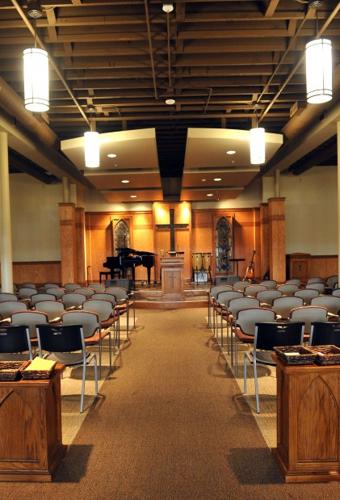 This is a view of the sanctuary inside Grace Church on Thursday afternoon in downtown Fremont. 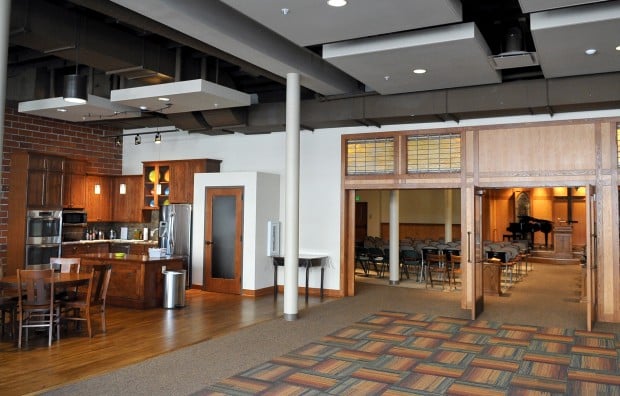 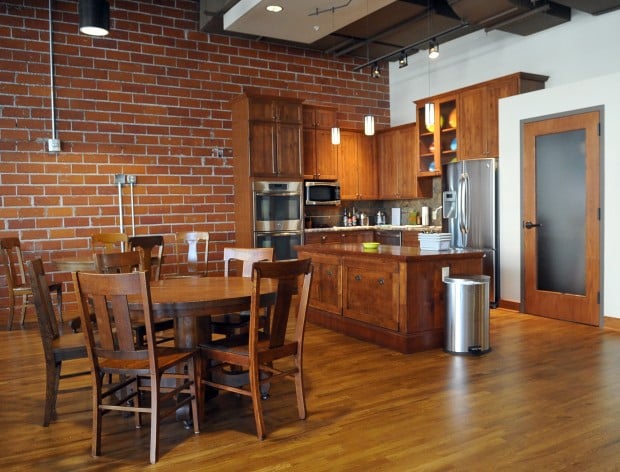 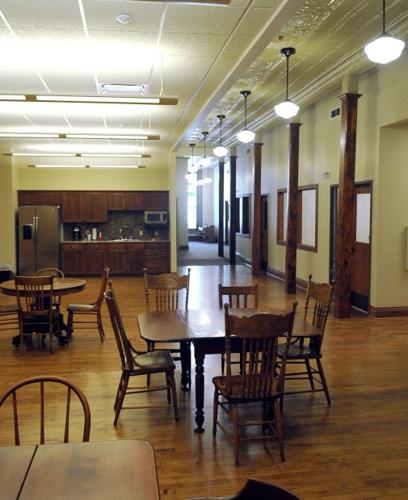 This is part of the second floor area in Grace Church.

The building that houses Grace Church PCA has become a of blend of old and new.

Now the building is God’s house, where worshippers gather weekly in an area that combines history with the future. Grace, which is part of the Presbyterian Church in America denomination, formed in 2010. Worship services took place at Midland University, starting that fall.

It was a good beginning.

“Midland University was a great place to start and they were very gracious,” said the Rev. Kyle McClellan, pastor. “We’re really thankful for Midland. But when they closed 10th Street, it was great for Midland and terrible for us in terms of visibility and accessibility.”

The church, which wanted to locate downtown, bought the historical Sixth Street property in April 2012. The exact age of the 10,000-square-foot structure is uncertain.

“On the outside, it says ‘1880’ — on the top of the building — so it’s at least that old, but they think it’s even older,” said Meri Jo Soe, administrative assistant. “There are some places in the basement where the foundation is actually not bricks. It’s just rock. I’m thinking it’s from whenever the town was started. I think there was a building here even then.”

The church obtained a $66,000 federal grant for façade renovation and worked to restore aesthetically what the structure looked like when it was built. The building’s exterior is true to what the church could find in pictures from the early 1900s, Soe said.

Members of the congregation tore out old tile, linoleum and plaster, walls that were no longer needed, and a downstairs drop ceiling. Tin ceilings were left in place as was exposed brick in places. Fauss Construction began its work in November 2012.

On the building’s first level is a fellowship area and a kitchenette. Wooden cabinetry adds to a homey effect, while exposed brick provides the historic feel. First floor colors include earth tones and gray. The sanctuary seats 175. The second floor includes offices, a workroom, two classrooms, a large gathering area and a conference area. Upstairs colors include rust, green and earth tones.

From large windows on that second floor, guests can see businesses along the street.

It is a church with a view.

The congregation’s first worship service in the building took place on June 30.

“It was great,” Soe said. “It’s nice having your own space and not having to bring in everything from coffee to tables and all of the sound equipment – and having to set that up every Sunday and tear it down every Sunday. … You feel like you have a home.”

“Anytime you finally have your own space, that’s a good thing,” he said. “It does give you a sense of permanence — and when you’re brand new that’s a pretty big threshold to cross over. It’s made it easier for folks to find us. Parking is a piece of cake. It’s really been beneficial for us.”

Average weekly attendance is about 80.

She noted that the church also had a good turnout during its first official Sunday during the John C. Fremont Days festival.

Sunday morning worship services start at 10:30 a.m. Sunday school, preschool through adult, is at 9:30 a.m. At 7 p.m. Wednesday, the church offers a prayer group/Bible study. All are open to the public.

Members already have made cherished memories in their new church home.

Some involve Jackson Blick, who was a drummer at the church. Before his death in a June 3 vehicle accident, Blick had been quite involved at Grace.

“Jackson played an active role in the church worship band so we miss him,” Soe said. “It’s really been wonderful to be in our new space and still remember how much he contributed to this project. He helped a lot with the deconstruction. He loved to do that kind of stuff. We are blessed with having that time with him.”

The church is part of the Platte Valley Presbytery; its leadership is under the direction of Redeemer Presbyterian Church in Lincoln. The church is looking toward the future.

“We’re just very blessed to be able to do this,” Soe said. “We hope we will be a good addition to downtown and that God will bring us those people who want to know him better.”

A Fremont man died Friday due to an accidental drowning at the Fremont Lakes State Recreation Area.

One lucky player who bought a Nebraska Pick 5 ticket in Fremont for the Wednesday, Aug. 3, drawing is holding a ticket worth $198,000.

Fremont Police officers responded to a four-car accident on Wednesday at 23rd and Main streets.

A Fremont man was arrested Monday night after he allegedly stole a Mercedes SUV, led sheriff’s deputies on a high-speed pursuit in Seward Coun…

One dies, others injured after 4-vehicle accident

A Sioux City, Iowa, woman has died after a four-vehicle accident Sunday afternoon on U.S. Highway 77 between Nebraska Highway 109 and the Plat…

The activity of Sixth Street can be seen from the sanctuary inside Grace Church in downtown Fremont.

The Rev. Kyle McClellan takes a break from work in his office in the new Grace Church Thursday afternoon in downtown Fremont.

This is a view of the sanctuary inside Grace Church on Thursday afternoon in downtown Fremont.

This is part of the second floor area in Grace Church.