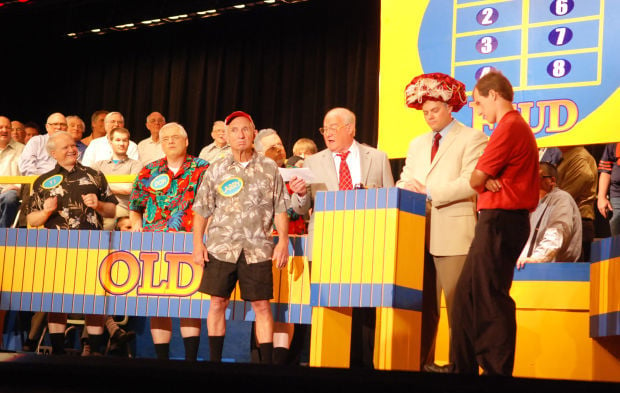 Pathfinder Chorus members portray a turban-wearing Johnny Carson and Ed McMahon as guest hosts of competition during a previous spring show at Fremont High School. This year, the spring show is set for March 22 and 23 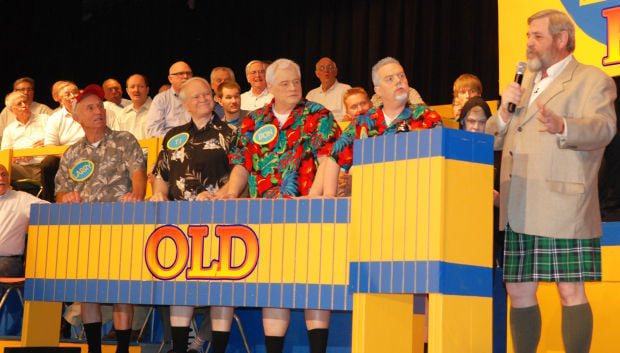 Steve Slykhuis hopes area residents will come to hear the world premiere of a song.

A special arrangement of that song will be part of the Pathfinder Chorus’ latest show, “A Funny Thing Happened on the Way to the Station.”

Those who attend will hear and see a performance by a men’s a capella singing group that is an eight-time finalist in the Barbershop Harmony Society’s International Contest.

This year, the show also will feature the Main Street quartet — the 2017 international champions. In addition, a pop medley the quartet sang four years ago has more than 4 million views on YouTube.

The guest quartet consists of members Mike McGee, Myron Whittlesey, Tony De Rosa and Roger Ross — all of whom have been or currently are performers at Disney World with the Dapper Dans of Main St. USA. Outside of barbershop singing, they have performed in film, television, radio and musical theater.

“They are great singers and very funny,” said Slykhuis, Pathfinder president and master of ceremonies.

During the local shows, the Pathfinder Chorus will sing familiar songs such as “Africa” by the band Toto and “Can You Feel the Love Tonight” from The Lion King movie.

The chorus, which again has qualified for international competition, will debut its contest set at this month’s performances. The set consists of two numbers by songwriter Stephen Foster (1826-1864), known as the father of American music.

These songs are “Hard Times Come Again No More” and also “Gentle Annie” — an arrangement of which was made exclusively for the chorus by former Pathfinder member Adam Reimnitz.

“It’s literally a world premiere of that particular arrangement of music,” Slykhuis said.

Approximately 65 singers from high school age to men in their 80s will sing during the show.

Pathfinder shows feature a theme and this year is no different.

The premise of the group’s spring show involves radio station personnel who have enlisted a focus group to compare music throughout the years. Their objective is to determine what style of music the station should play now.

Thus, the chorus will sing songs from the 1940s to today.

The spring show is the chorus’ main fundraiser of the year. Proceeds help pay for music, coaching, tuxedos and rehearsal space rental.

“People don’t realize every sheet of music we have for all our members — we have to pay royalties on,” Slykhuis said. “Every time we download a learning track or a piece of music, we pay the creator a royalty — so that can be a significant expense.”

“We all pay our own way to that, but this (show proceeds) helps pay for the music and the coaching that gets us there,” Slykhuis said.

Members look forward to the events and Slykhuis noted that some high school-age singers have joined the chorus.

Slykhuis said younger men can benefit from being in the group.

“Young men get to see male role models from all professions and ages who continue to love to sing and that helps show them the value of singing throughout life and the joy it brings,” he said.

Slykhuis encourages the public to attend the show.

“They should come to this concert to have fun,” Slykhuis said. “You’re going to hear great music, laugh at some stupendously bad jokes and see a world class quartet.”

Fremont Kiwanians are getting closer to their goal of putting playground equipment in Johnson Park.

Last year, Tami Clausen approached people in her church about having a women’s retreat.

Bob Olsen has been an instrumental part of Fremont’s musical heritage for decades.

Fremont High School’s Nell McPherson Theatre will be a busy place the next few days.

Long before evacuees ever walked through the door, members of First Lutheran Church were preparing to serve as a shelter team.

Retreat to focus on 'Healing and the Holy Spirit'

An international speaker is coming to St. Patrick’s Catholic Church this month.

Altrusa Club of Fremont held a potluck dinner at 6 p.m. March 4 at the Methodist Church. Rhoda Holstine and Karen Rathje were hostesses.

Pathfinder Chorus members portray a turban-wearing Johnny Carson and Ed McMahon as guest hosts of competition during a previous spring show at Fremont High School. This year, the spring show is set for March 22 and 23