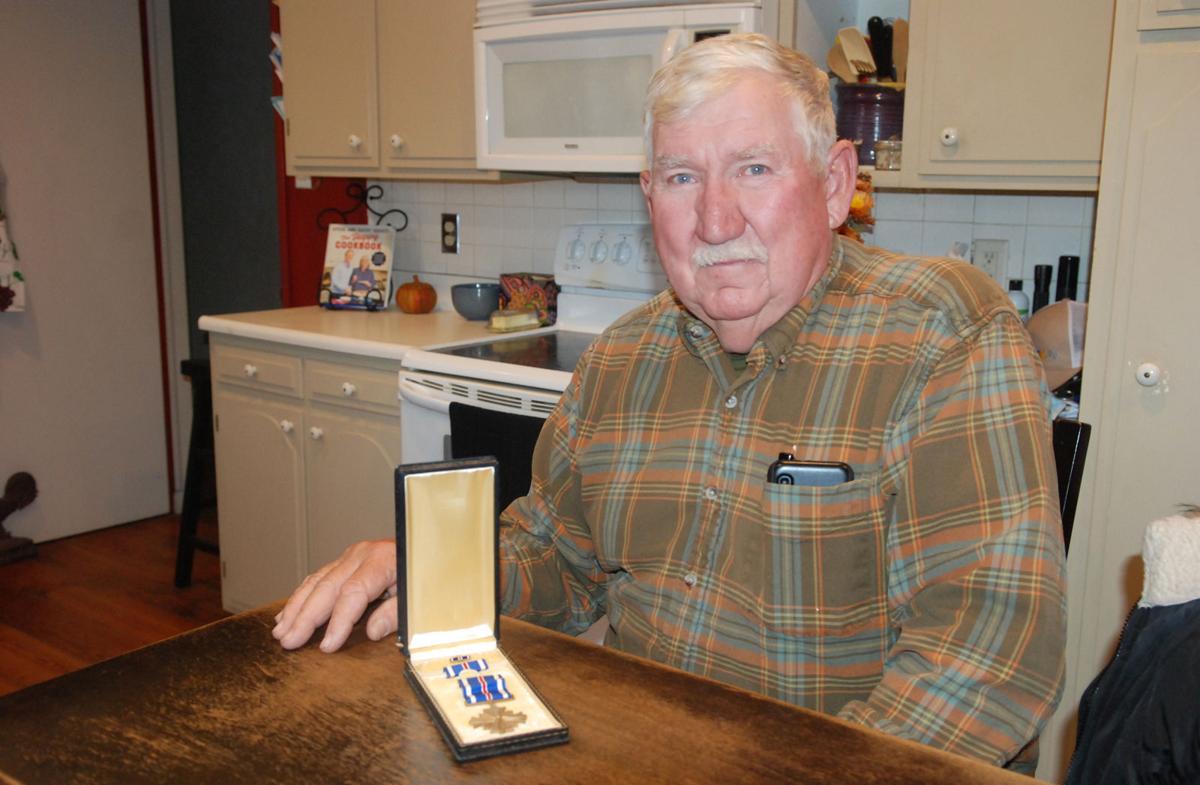 Fremonter Jerry Knoell shows one of two Distinguished Flying Crosses he earned during his service in Vietnam. 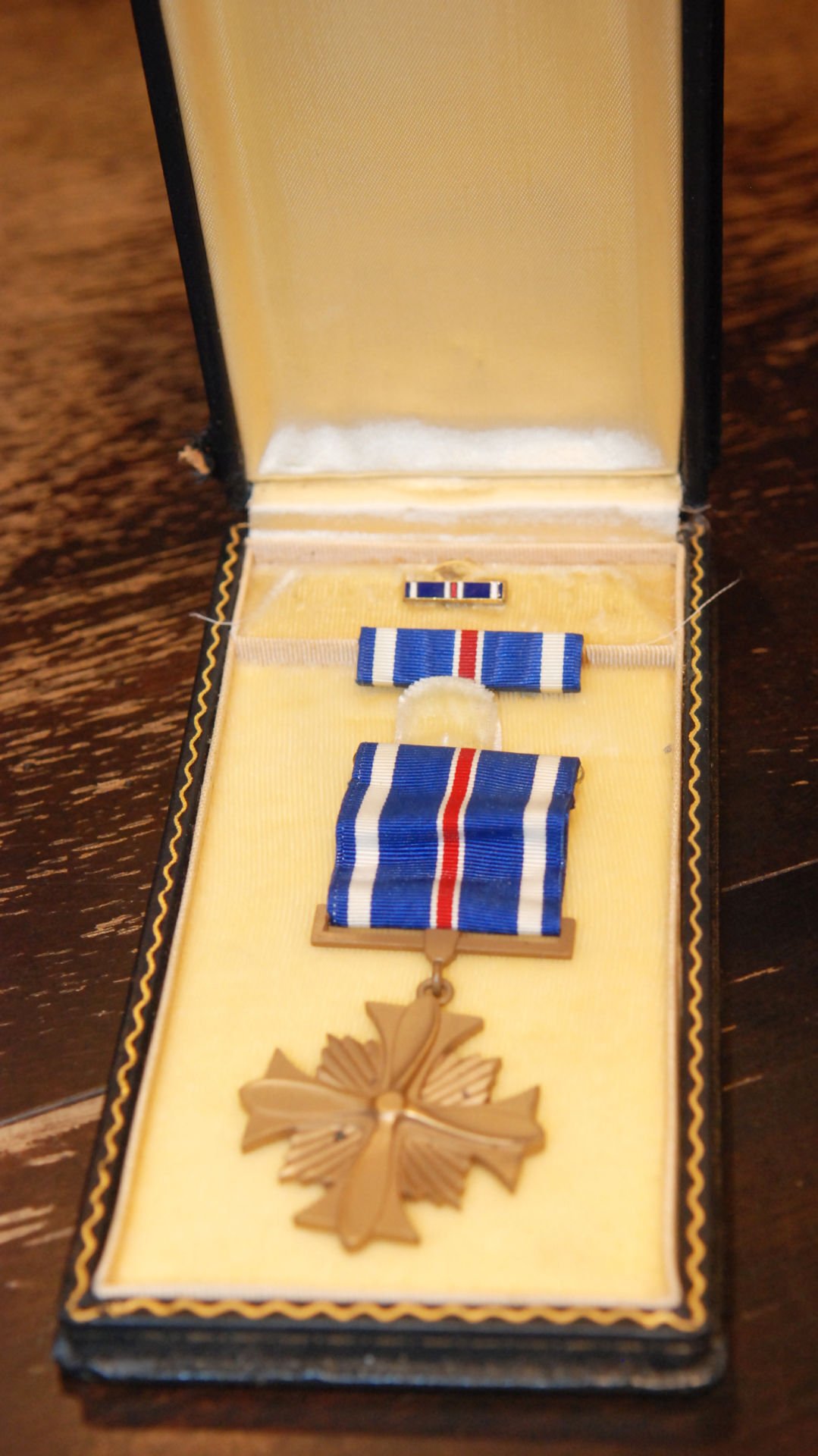 This is one of the Distinguished Flying Crosses that Jerry Knoell earned during his service in Vietnam. 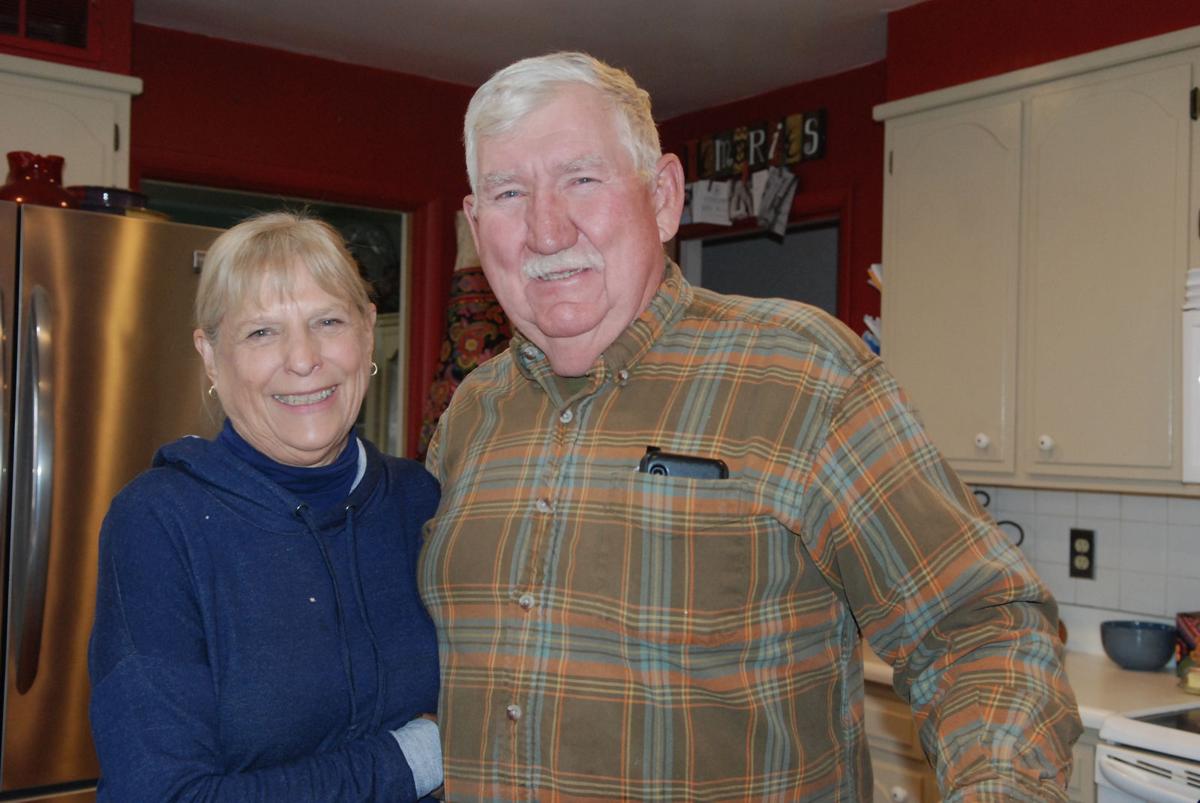 Nancy and Jerry Knoell are shown in their home in Fremont. They enjoy their grandchildren and hope to do more traveling in the future.

For years, Jerry Knoell didn’t talk about his military service in Vietnam.

Knoell hasn’t been one to recount the close calls or the loss of a good friend.

The first time he was ever thanked for his service was when his oldest granddaughter, Madison Rall of Omaha, took him to a Veteran’s Day school breakfast when she was in kindergarten.

“She gave me a little lapel flag,” said Knoell, who lives in Fremont. “That was the first I was ever recognized as a Vietnam veteran. That was very nice.”

Since then, all of his 14 grandchildren have invited him to veterans’ events, designed to provide recognition to those who’ve faithfully served their nation.

Knoell was born and grew up in Fremont. He graduated from Fremont High School in 1967 and went into the Air Force the next year.

He was trained to load aircraft so they weren’t too nose- or tail-heavy.

He’d load and fly aboard planes with all sorts of food, supplies, passengers, wounded and deceased military personnel in Southeast Asia. Later in his career, he was involved in hauling a nuclear bomb in Europe.

Knoell would go to CCK Air Base in Taiwan.

From there, he’d fly shuttles aboard a C-130 military aircraft in Vietnam for 15 to 18 days at a time and then return to Taiwan for about a week.

On Nov. 7, 1969, the young sergeant and crew flew into Katum Airfield in Vietnam for an emergency evacuation of a combat unit amid intense ground fire.

There were rockets and mortars.

The aircraft was noisy and Knoell could hear the ground fire, but concentrated on getting the plane loaded and leaving. A vehicle was driven into the aircraft.

Then some American soldiers approached the plane.

“Six or seven or eight guys came up and said, ‘We’re the last guys walking. Can we get out? Can we get a ride?’” Knoell recalled. “I didn’t tell the pilot. I just said, ‘Yeah, get on’ and once the load was secure, I told the pilot, ‘We’re ready to go’ and we took off.”

A citation accompanying the Distinguished Flying Cross awarded to Knoell said the crew had the support of a forward air controller, fighter and helicopter gunship due to the intense ground fire.

Two aircraft were shot down.

It commended the then-19-year-old Knoell for “professional competence, aerial skill and devotion to duty.”

After 15 months, Knoell rotated back to the United States and was stationed at Pope Air Force Base in North Carolina and was assigned to a unit flying in Europe. He saw many countries including Germany, Spain, Greece, Italy and Turkey. He saw North Africa and islands in the Mediterranean Sea.

While there, he was involved in the transport of a disarmed nuclear bomb.

He is unassuming in describing his role.

“It was just another mission - something you load and off-load. There was a courier with it - a guy rode along with it. I just moved it from one base to another,” he said.

Knoell extended his enlistment and returned to Taiwan and continued shuttle missions. This time, he and the crew flew out of Cam Ranh Bay and Tan Son Nhut air bases in Vietnam.

Knoell had some pleasant flights like when he went to Kathmandu, Nepal for a week. On that flight, his plane carried supplies for the aircraft that American Vice President Spiro Agnew was aboard. Knoell attended a vice-presidential dinner in Kathmandu.

He also was in the backup plane for a Bob Hope USO show. He got autographs from girls in the show.

Other flights weren’t so pleasant.

In 1972, Knoell was a staff sergeant aboard a C-130 loadmaster for the 6th Aerial Port Squadron at An Loc, Vietnam.

He was involved in airdrops three times in late April and early May. Three aircraft went out each time.

The citation for the second Distinguished Flying Cross that Knoell earned described the April 28th mission as a nighttime, low-level emergency airdrop of critically needed ammunition and supplies. The drop was made to a “besieged concentration of allied forces in a heavily defended hostile area.”

There was a lot of it.

“You go in, tree-top level,” he said. “You raise up to 650 feet over the drop zone and airdrop the cargo. It was about three football fields - the size that we had to hit.”

“With complete disregard for his own personal safety, in spite of heavy anti-aircraft fire and intense automatic weapons activity, sergeant Knoell performed his aircrew duties with exact precision, resulting in a completely successful mission,” the citation states.

One of the three aircraft on the mission was shot down.

Two days later - on May 1 - Knoell and a crew made another airdrop again at night. Three aircraft went out and all came back.

On May 3, three aircraft made another airdrop. Two aircraft, including Knoell’s, returned.

But the aircraft carrying his good friend, Joe Hopper of Kentucky, didn’t make it back.

Knoell grows quiet when talking about his friend.

Even after an aircraft was shot down on the first night, Knoell thought about the possibility that he might not come back.

“Somebody’s number is going to come up, but lucky - mine didn’t,” he said.

Knoell spent the rest of his tour doing shuttle missions. He completed his service in October 1972. He came home and later began working in the masonry business with Roger Chisholm. He did construction work and poured concrete.

He married and he and his wife, Diane, had three children, Stacy, Jeremy and Chris. The children were ages 7 and 5 years old and about 17 months when their mom died in a car accident.

Knoell credits family with helping him.

Years later, his daughter was a junior in high school and a young man named Thad Gossett was a senior when they took Knoell and his future wife, Nancy Gossett, out on a blind date. She had been divorced with three children for 18 years.

Jerry and Nancy dated for about six years before marrying in 1998.

Nancy said her husband doesn’t talk much about his war experiences.

“So when Madison invited him (to the Veterans breakfast), it was special,” she said. “Now, all of the grandchildren have invited him to different events for Veteran’s Day.”

The Knoells love all their grandchildren. The youngest, Jace Knoell, has faced his own battles.

He was a baby when diagnosed in September 2013 with neuroblastoma, a type of cancer that occurs in young children.

Now 8 years old, Jace is battling a second bout of cancer and a sixth round of chemotherapy is scheduled.

The boy is a third-grader at Bergan Elementary School.

Jerry, Jeremy and Jace hunt and fish together.

Knoell retired about three years ago. Now, 71 years old, he enjoys working on a cabin on an island in the Platte River.

In January, the Knoells plan to go to Portland, Texas, and spend six weeks with Thad. It’s a trip they’ve enjoyed for the last few years.

Although COVID-19 has been halting many people’s travel plans, the Knoells eventually would like to do more traveling - even though Jerry has been to many places.

“I’ve been a long ways east and a long ways west,” he said. “If anything, I wouldn’t mind seeing Alaska.”

Sheriff: No evidence of impairment in Woods crash

Sheriff: No evidence of impairment in Woods crash

It started with a cap.

Church schedules 'Hanging of the Greens'

A Scribner area church is finding treasure even amid the COVID-19 pandemic.

Members of the Keene Memorial Library advisory board learned about progress on the planned building expansion when the group met recently.

Nobody wants to get sick with a food-borne illness on Thanksgiving.

Despite illness and a destructive storm, Carlos Hernandez is a grateful man.

As a child, Michelle Steele really did try to run away with the circus.

Following is the Fremont Friendship Center menu and activities for Dec. 7-11.

Alan Thomsen remembers 1964 as a sad year for his family.

Following is the Fremont Friendship Center menu and activities for Dec. 14-18

A corn hole tournament and music by Happy Players are on tap for next week at the Fremont Friendship Center.

The Fremont Friendship Center announced on its Facebook page early Tuesday evening that will be remain closed on Wednesday, Dec. 30.

Meals and activities for Jan. 4-8 at Fremont Friendship Center

Fremonter Jerry Knoell shows one of two Distinguished Flying Crosses he earned during his service in Vietnam.

This is one of the Distinguished Flying Crosses that Jerry Knoell earned during his service in Vietnam.

Nancy and Jerry Knoell are shown in their home in Fremont. They enjoy their grandchildren and hope to do more traveling in the future.