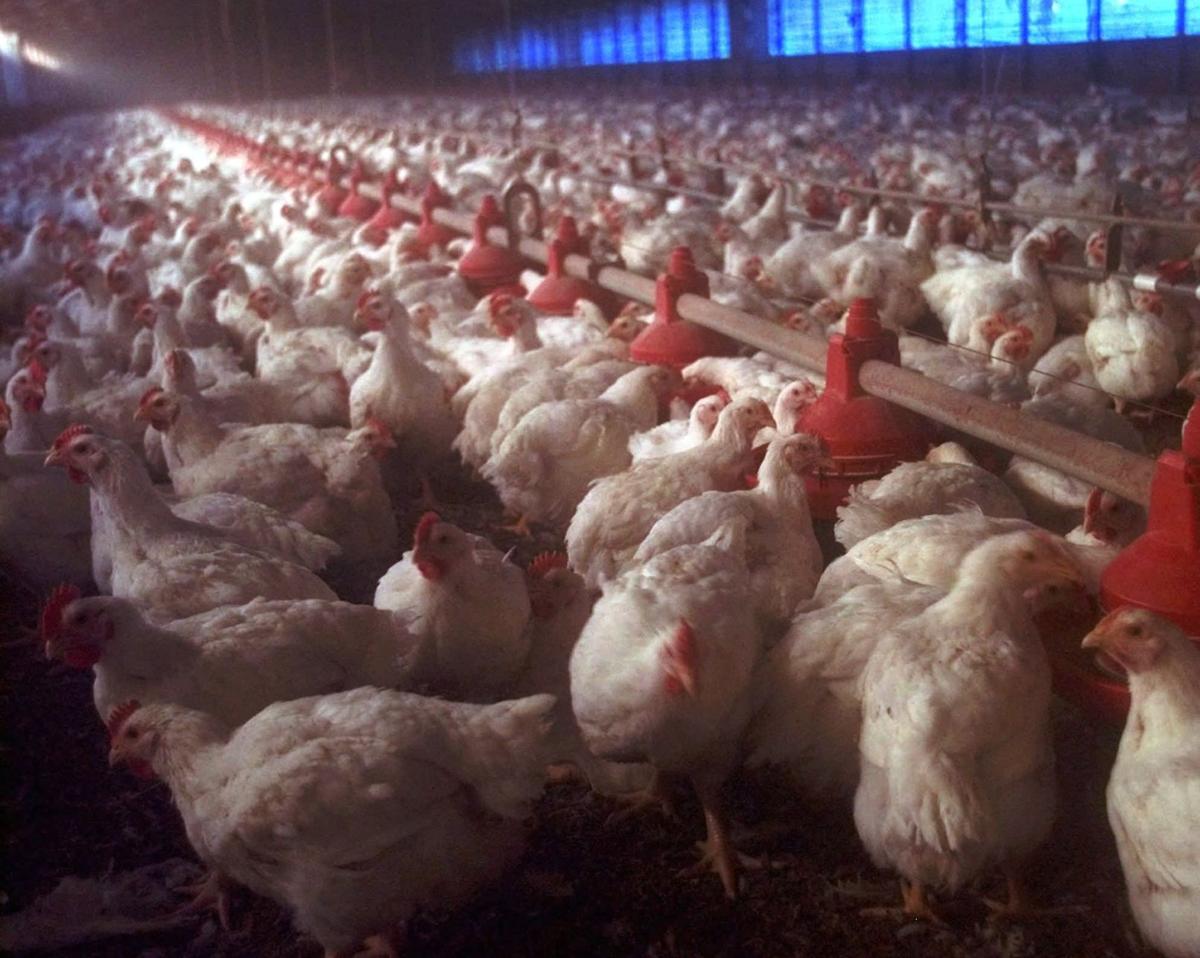 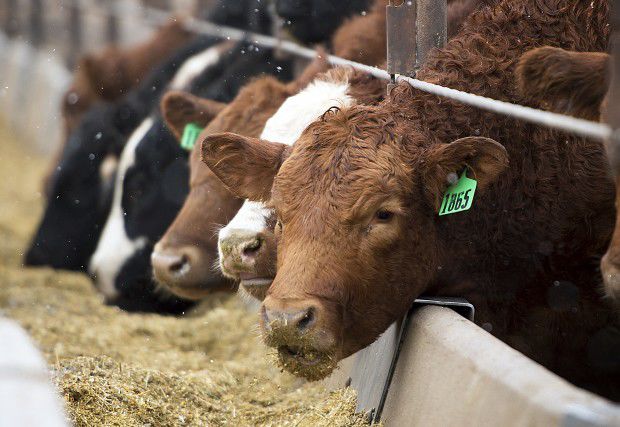 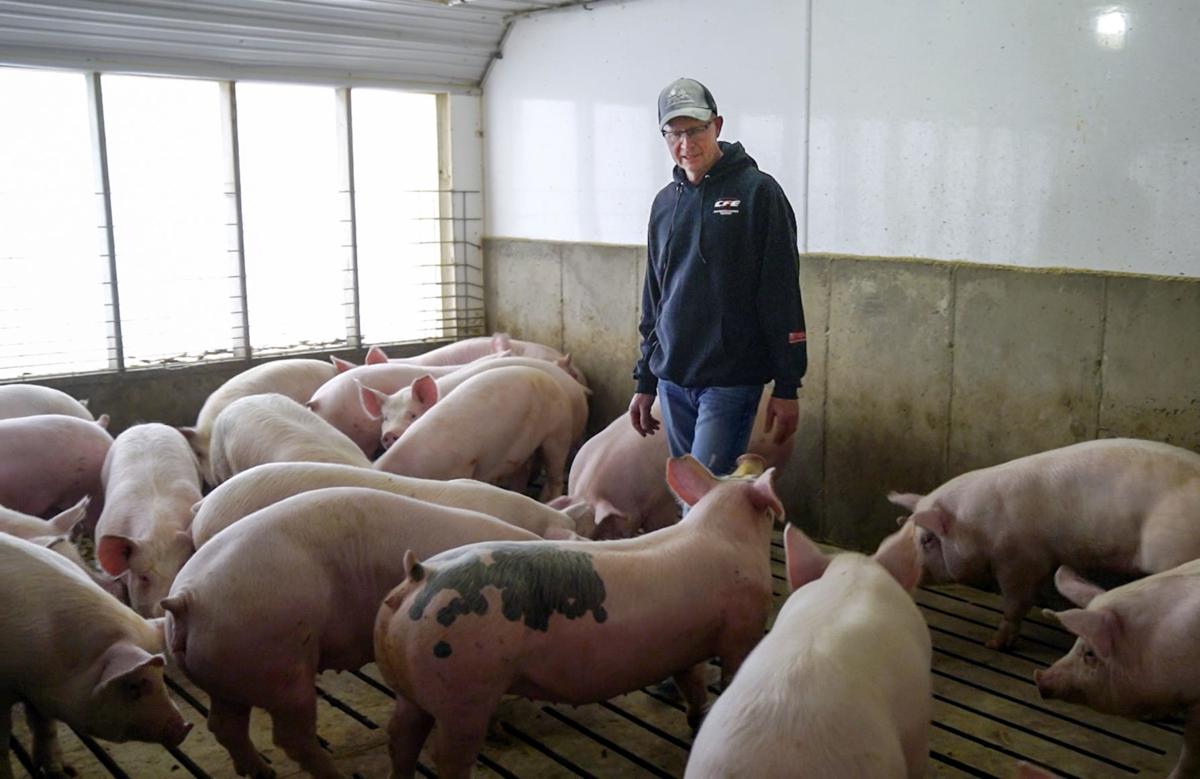 A pig farmer in Hawarden, Iowa.

Local governments have a lot to consider when deciding whether to approve a conditional use permit for a livestock operation.

There are the setbacks -- whether the proposed site is far enough away from roads or other properties. There’s the size of the operation and the number of animals. There are considerations of how waste is handled, how manure is applied, how traffic may be affected, how odor and waste are controlled, how it may contribute to the economy, and more.

In Dodge County, much of that can be boiled down to a single number.

That’s because the county assesses the quality of livestock proposals with the Nebraska Livestock Siting Assessment Matrix, a rubric that scores applications for livestock proposals based on a wide variety of criteria, including those mentioned above. Any score above a 75 is said to have met the minimum requirements for approval.

The matrix, developed through state legislation, has had a special significance here in Dodge County. The county was the first in Nebraska to adopt the matrix back in 2017. Since then, it’s garnered some attention as it’s been used to evaluate incoming poultry operations, proposed by contract growers hoping to produce chickens for Lincoln Premium Poultry and the often-divisive Costco processing plant being built here in Fremont.

In counties across eastern Nebraska, the proposed poultry barns have elicited both welcoming and critical responses from residents, and the same has been true in Dodge County. The proposals occasionally put the matrix to the test -- with county officials praising it as a helpful tool and skeptics fearing that it could supplant the opinions of local residents.

“I think what everybody decided through this statute was that if you had a scientific application here like the matrix, it would take the emotion out of it,” said Dodge County Zoning Administrator Jean Andrews. “Well it does and it doesn’t.”

That tension was on display at the last Dodge County Board of Supervisors meeting, when after hearing hours of public comment, the board of supervisors denied a proposal for a 10-barn poultry operation in Nickerson. Among concerns about traffic safety, odor and the effect of the barn on property values, some urged board members to look past the proposal’s matrix score and listen to neighbors’ concerns. The board ultimately listened, voting 4 to 2 against the proposal -- despite it scoring 114 on the matrix.

The matrix was developed as a result of LB106, a 2015 law that created a committee consisting of the Nebraska Department of Agriculture, along with representatives from the Nebraska Association of County Officials (NACO), representatives of the livestock industry and the University of Nebraska. The committee was to find a way to “streamline” the process of siting livestock facilities in a state where each county had its own regulations and zoning laws, according to Steve Martin, who, at the time, participated in the committee as a Department of Agriculture representative.

Originally, the matrix was envisioned as a mandatory program that all counties would be involved in, said Martin, who is now the executive director of Alliance for the Future of Agriculture in Nebraska, a Lincoln-based trade organization that represents livestock producers.

“As they went through the debates and everybody had their input, it was changed to being a voluntary system,” Martin said. “If a county decides to adopt the matrix, they can, number one, adopt it how they want to adopt it, and they can also change how it gets used.”

Dodge County was the first to adopt it in 2017 -- a decision that was at least partly informed in anticipation of new poultry operations that could come before the board as part of the Costco project, according to Board of Supervisors Chairman Bob Missel.

But it didn’t take long for Dodge County to seek to change the matrix. The matrix, in its original conception, would automatically grant a conditional use permit to any producer who scored the minimum 75 points. Dodge County didn’t want the matrix to represent a final decision, but rather act as a “tool to help in the process,” Missel said.

“Ultimately, the governing body should always have the final say,” Missel said.

When the first Costco-related poultry operation came through the county planning commission, it scored 100, but the board brought the applicant in for a public hearing anyway, where it ultimately passed in September of 2017.

At the start of 2018, Dodge County voted to formally change the language of the matrix, noting that any proposal scoring above a 75 would be “considered” for approval by the board -- not automatically approved.

Andrews noted that the matrix isn’t just geared toward poultry -- all livestock operations seeking conditional use permits would fill out a matrix. That score is first considered by the Dodge County Planning Commission, which listens to public input and casts a vote on whether to recommend the project. The board then considers that recommendation -- along with the matrix score, application and public input -- before casting its vote on final approval.

Any application below a 75 will not come before the planning commission, Andrews said.

The matrix requires applicants to list basic information about their project, including the number of animals they intend to raise. They then answer a series of dozens of questions, organized into 13 subsections divided by topic.

Under the water quality protection subsection, for instance, an applicant may score two points if the majority of their animals will be housed within a confinement building. They can score additional points if their facility has other features that can help reduce runoff.

There’s a subsection that deals with traffic as well -- an applicant can lose three points if they build on a minimum maintenance road. They can gain five points if they enter into a cost-share agreement with the county for road maintenance.

Under economic development, an applicant can gain four points if they expect to generate more than $1 million in property tax revenue. Other subsections require applicants to disclose how they plan to manage dust and odor, whether they’ve communicated with area property owners about the project and more.

The two biggest areas for point accumulation are listed in the first two subsections. If the application meets all of the county’s setback requirements, it scores 30 points. Another 30 points are awarded if the proposal meets all Nebraska Department of Environmental Quality permit requirements.

Martin argues that a score exceeding a 75 represents a strong commitment from a livestock producer to be a good neighbor.

“The things they write down for their matrix scoring becomes part of their conditional use permit,” Martin said. “It really obligates the producer to do those things.”

Additionally, Martin believes that the matrix, which is made publicly available at public hearings, also aims to provide more transparency to how livestock operations are approved, providing a number that quantifies a proposal’s quality.

“With the matrix, it was more of a show and tell, where you could show people what you were doing, and it was a little bit more visible, a little more transparency,” Martin said.

But for those who are wary about the expansion of animal confinement operations like those being pursued through the Costco project, there is concern that the matrix could streamline the process, allowing boards to justify approvals without addressing local concerns.

Randy Ruppert’s group Nebraska Communities United has long opposed the Costco project, arguing that the proliferation of poultry operations could impact local water quality. While Ruppert praised the Dodge County Board for listening to public input in denying the last proposal, he’s concerned that the matrix -- designed partly by the state and industry reps -- could eventually become the only requirement in livestock applications.

“I don’t think that the state and outside corporations have the right to mandate what should or shouldn’t be in a county,” he said. “Luckily for Nebraska, we still have some input on that. Our concerns with the matrix, [is it] will be modified … that when you score your points, you don’t have to go to the board of supervisors, you don’t have to go to anybody, you’re guaranteed your permit, and that’s just absolutely wrong.”

Martin, for his part, said he doubted that the matrix would ever become a mandated statewide standard, since feedback during its development suggested that it was important for counties to maintain their local control. He noted that such a change would likely have to come through the legislature.

“In the development of the matrix, the overwhelming majority said ‘no we want to keep our local control and we want to have that flexibility within the counties,’” Martin said.

Additionally, throughout the public comment period during the last board meeting, several commenters expressed concern that the public notification requirements on livestock proposals were not adequate.

The matrix, for instance, awards five points if an applicant has communicated with 100 percent of property owners within a one-mile radius of the property, which some argued was not enough. The last application did not score those points.

Dodge County zoning regulations only require notification of property owners within 300 feet of the property line, Andrews said, in addition to signage placed out at the site. She believed that radius could stand to be expanded somewhat, and said that the county is beginning to discuss updating its zoning regulations and its comprehensive plan, which haven’t been updated in 20 years.

She noted, however, that, due to budget constraints, it could be some time before the board moves forward with making those updates, and that expanding that radius too far could strain county resources.

Meanwhile, any other changes that would be made on the matrix would occur during an annual review, when the committee reconvenes to consider feedback and make necessary changes.

“We just had our first annual review this last year,” Martin said.

Progress 2019: A closer look at the matrix

County monitoring traffic counts by barn site; other issues discussed at board meeting

A pig farmer in Hawarden, Iowa.