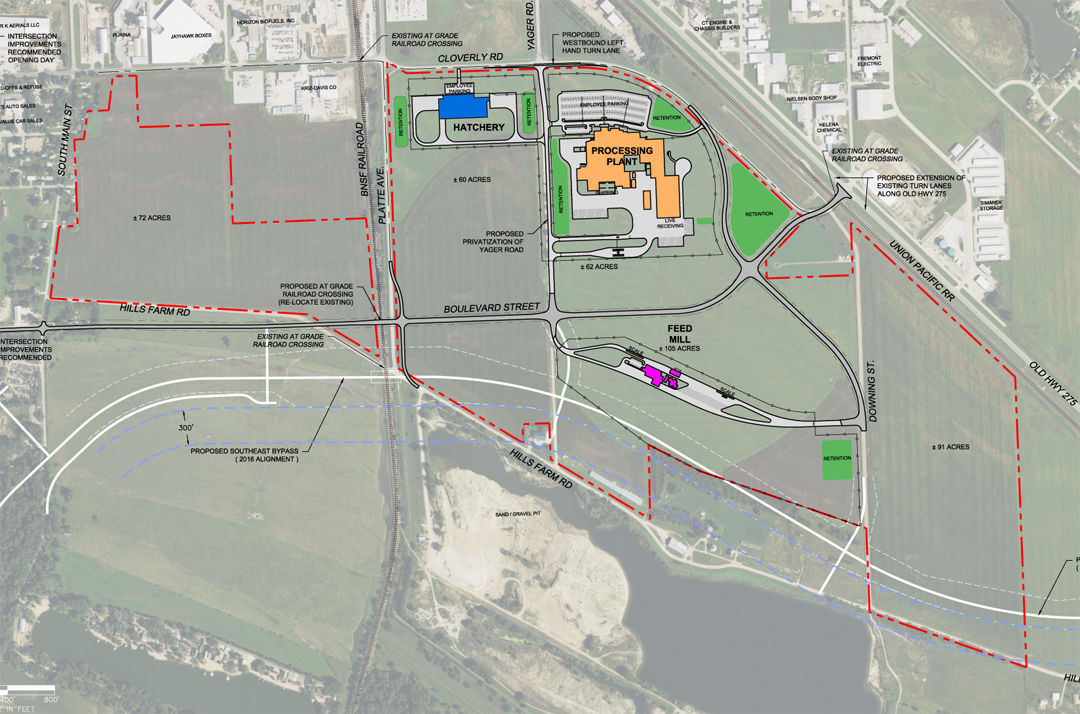 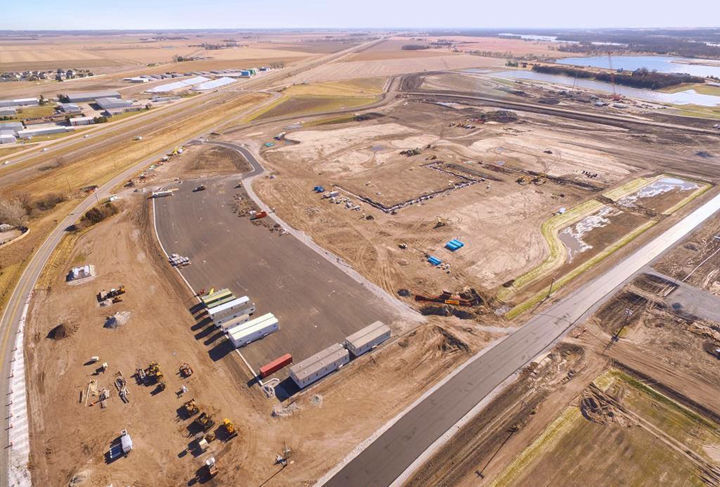 An aerial view of the land where the Costco/Lincoln Premium Poultry processing facility will sit.

To raise a chicken operation, it takes a village.

And for the Costco and Lincoln Premium Poultry chicken operation, that village is a large one, consisting of more than two dozen contractors and subcontractors from Nebraska and beyond.

This story is the first in a four-part series looking at the implementation of Costco and Lincoln Premium Poultry’s chicken operation in Nebraska and exploring the project’s initial local economic impact. For this story, we explore the contractors who are directly involved in building out the plant and its associated barns. This story aims to provide a snapshot of the early beneficiaries of a project that Costco has claimed will eventually generate $1.2 billion in annual economic output to the state of Nebraska.

The Fremont Tribune confirmed that at least 24 companies are connected to the operation through contracts or subcontracts, and interviewed 13 of them. These contractors can be divided into two main categories: those working on the Fremont-based complex, which consists of Costco’s processing plant, hatchery and feed mill, and those who are contracted to build the barns that will be operated by producers contracted with Costco.

Few of the contractors working on the Costco and Lincoln Premium Poultry project are headquartered in Fremont and Dodge County. But 18 are from the eastern Nebraska area, reaching as far west as Chapman. Several are headquartered out of state, in Washington, Maryland, Iowa and Arkansas.

Multiple companies declined to comment or did not respond to multiple requests for comment, leaving potential subcontractors unidentified. And Costco directed all inquiries to Jessica Kolterman of Lincoln Premium Poultry, who identified most contractors but could not identify smaller subcontractors.

The companies interviewed by the Tribune argued that the construction project is already having an impact on the local economy—through local job opportunities, an influx of out-of-town workers spending money in the region and large purchases of supplies and materials from local sources.

“If you drive through the parking out [by the plant] and start looking at plates and vehicles, I’m going to tell you that 60 or 70 percent of them are local plates,” said Mike Andersen, president of the Omaha-based W.S. Bunch Company, working on the Fremont complex’s sewer lift stations.

“The other 30 or 40 percent of those plates will be out of state plates,” he added. “So the financial impact of importing those numbers of people that are getting their paychecks every week in the Dodge County area, getting motels in that area, buying their fuel, food, ice every day, it’s gotta add up immensely.”

Costco is investing $400 million into building out the Fremont-based complex. On any given day, there are around 250 people working onsite from one of any of a dozen or so contractors involved in building the plant, feed mill or hatchery, said LPP’s Kolterman.

Kolterman previously told the Tribune that finding skilled, qualified labor in an increasingly tight labor market has been difficult—a concern that most of the contractors interviewed also shared, and that Eric Thompson, director of the University of Nebraska’s Bureau of Business Research, says is a problem statewide.

The local economic impact of large projects like the Costco plant is always greater when the contractors and employees are from the immediate community, where they would spend their entire paycheck. But hiring entirely locally is not always possible in large projects like Costco’s, Thompson said. That’s because of the scope and type of work might need specialized contractors from out of state.

“They end up spending on hotels and restaurants and maybe go over to the bowling alley one time—a variety of things,” Thompson said. “But it’s not as large an impact as when the contractors are local.”

Graham and Younglove didn’t respond to requests for comments while Whiting-Turner declined a request for comment.

But the companies are also working with several Nebraska subcontractors. Whiting-Turner, for instance, has hired the Omaha-based McGill Brothers. And General Excavating, out of Lincoln, has a roughly $5.5 million contract from Graham to do the site’s underground utility work.

During the peak of its work on the site, General Excavating had between 18 to 20 workers—mostly from the Lincoln area—onsite at any given time. That’s about 20 percent of its overall workforce, that General Excavating Project Manager Brian Egr says is spending money in Fremont on supplies, food and more.

“From our perspective, it’s great for us because it’s good quality work,” Egr said.

Combined, those three companies add another nine to 15 people to the site each day, mostly from Nebraska with at least two from Fremont.

Local company Fremont Electric is also working as a subcontractor for Younglove to do underground electrical work, a project that kept about six employees onsite each day. The project also yielded at least five additional bid opportunities for Fremont Electric, Shallberg says, some of which the company didn’t pursue and others it wasn’t successful on.

“As long as you have the opportunity to bid it, that’s truly what you ask for,” Shallberg said, adding that out-of-town work on large projects wasn’t unusual.“Some contracts get so large that we don’t have a contractor large enough to do that job.”

Fremont-based S2 Roll-offs and Refuse and Sawyer Construction have also done some work on site. Other Fremont-based companies have taken on big roles as suppliers for the project. Arps Red-E-Mix, for instance, has supplied a large amount of concrete.

On an overcast day in July, Ryan Zmek drives a golf-cart like vehicle in between strategically organized mounds of dirt, north of Blair in Washington County. His company, L&R Grading, creates the “building pads,” or elevated areas of land that will eventually undergird and help provide appropriate drainage for a portion of LPP’s incoming chicken barns. Zmek and his team of four—including two who were hired primarily to help with the project—live onsite until their part of the work is done.

“They’ll come in right directly onto these when we’re finished with them, and the buildings will be constructed on it,” Zmek said.

In total, there will be 520 barns, says LPP’s Kolterman: 24 pullet houses on eight sites, 64 breeder houses on 16 sites, and around 432 broiler houses on a still-to-be-determined number of sites that generally come in sets of four or eight—making a total of around 130 sites that will cost roughly $2 million each, paid out by the contracted grower.

The full scope of work over the next few years will require between 300 and 400 workers from about a dozen contractors, says Al Stephens of the Schuyler-based QC Supply, who holds the general contract from LPP for the barns.

“You put a salary to each of them and living expenses that they’ll be having to pay for food and lodging and activities when they’re not working and everything else that goes into that, [the economic impact] is pretty significant,” Stephens said.

Two companies are involved in the construction of the facilities: Ozark Ag out of Farmington, Arkansas, and Green Gable out of Fort Calhoun, Nebraska. Ozark Ag, who declined to comment, has at least one subcontractor: Signet Builders, out of Ames, Iowa.

R&R Christo will be installing the equipment in the houses, and Vision Electric, headquartered in Bondurant, Iowa, will be doing all of the electrical work. They’ve gone as far as opening offices in Fremont.

R&R, owned by Ashland native Randy Christo, is moving into the old Lariat building off of Old Highway 275. Christo says it was the size of the project that warranted the move, and that the company is contributing 100 workers—both new hires and employees—to the project. Christo has said that the company is trying to hire as much local labor as possible, but the local labor market has come up short.

Still the influx of workers brings its own benefit to the local economy, he argued.

“We’re renting housing, of course,” Christo said. “And of course, you know, obviously we pay taxes now here, locally with all our gas here. All of our 100 people that we bring in obviously will be buying their supplies here in Fremont.”

Twenty to 60 electricians will be employed at Vision Electric’s new office in Fremont, says owner Mike Blanchard, who added that he anticipates mostly local hires.

Next week, the Tribune explores Fremont’s local industries and suppliers who have received a boost from the project’s early stages.

Behind the train monitoring system

Fremont’s newly implemented train monitoring system, which allows the public to check the presence of trains at several vital crossings, has b…

An aerial view of the land where the Costco/Lincoln Premium Poultry processing facility will sit.