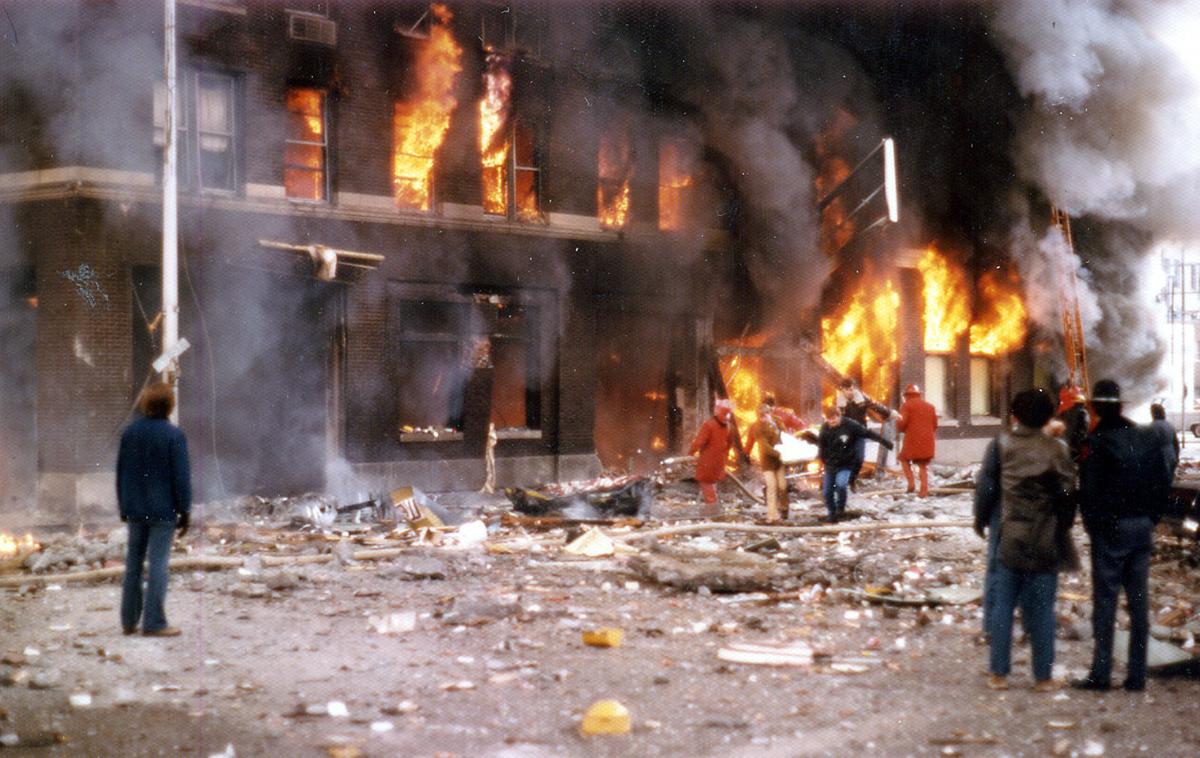 The Hotel Pathfinder explosion on Jan. 10, 1976, in Fremont killed 20 people and injured more than 40. It changed the face of downtown. 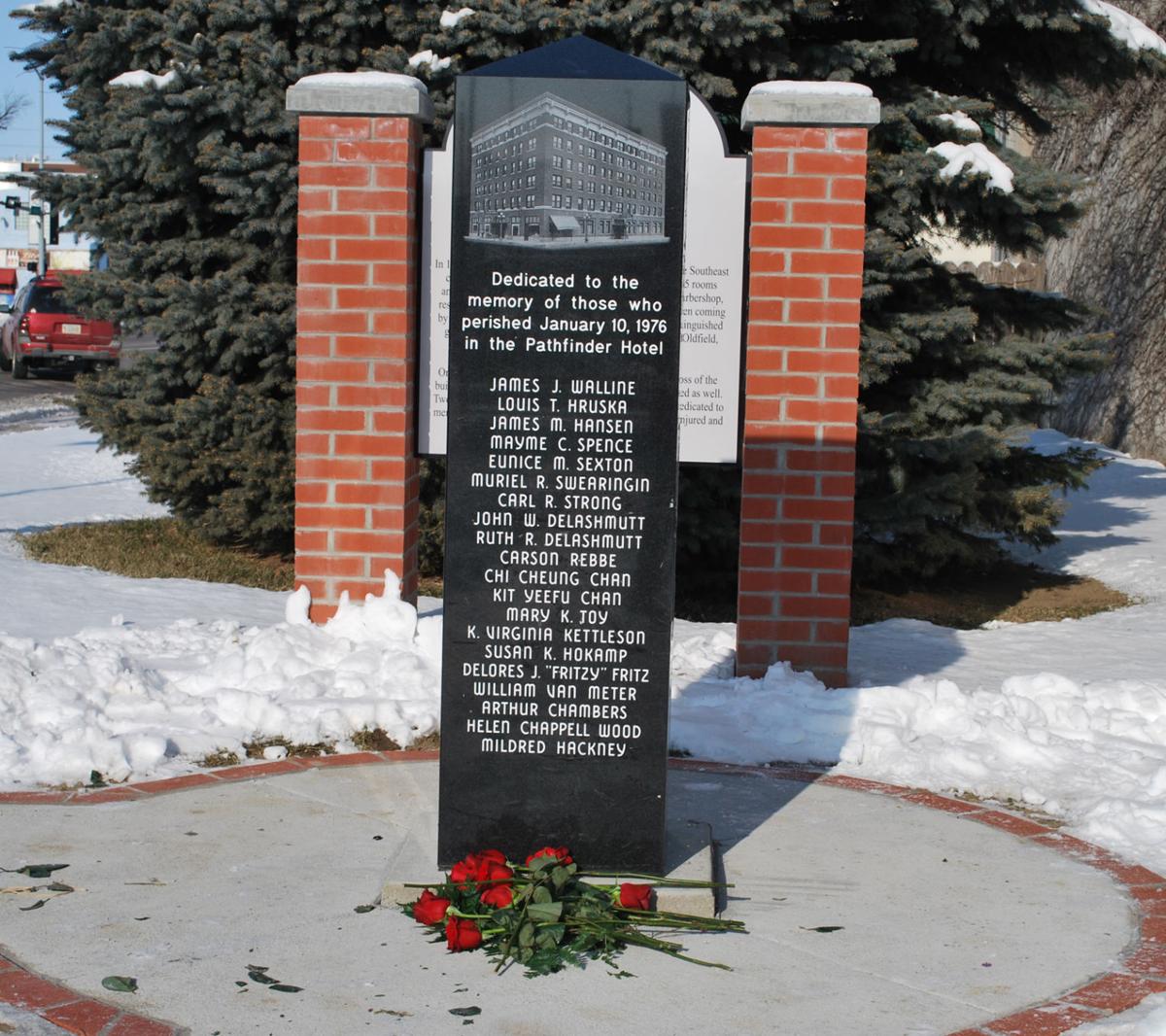 A 5-foot-tall monument honoring the 20 people who died in 1976 due to the Hotel Pathfinder explosion was unveiled in the afternoon on Jan. 10, 2016. The monument is in the city-owned green space at Sixth and Broad streets. 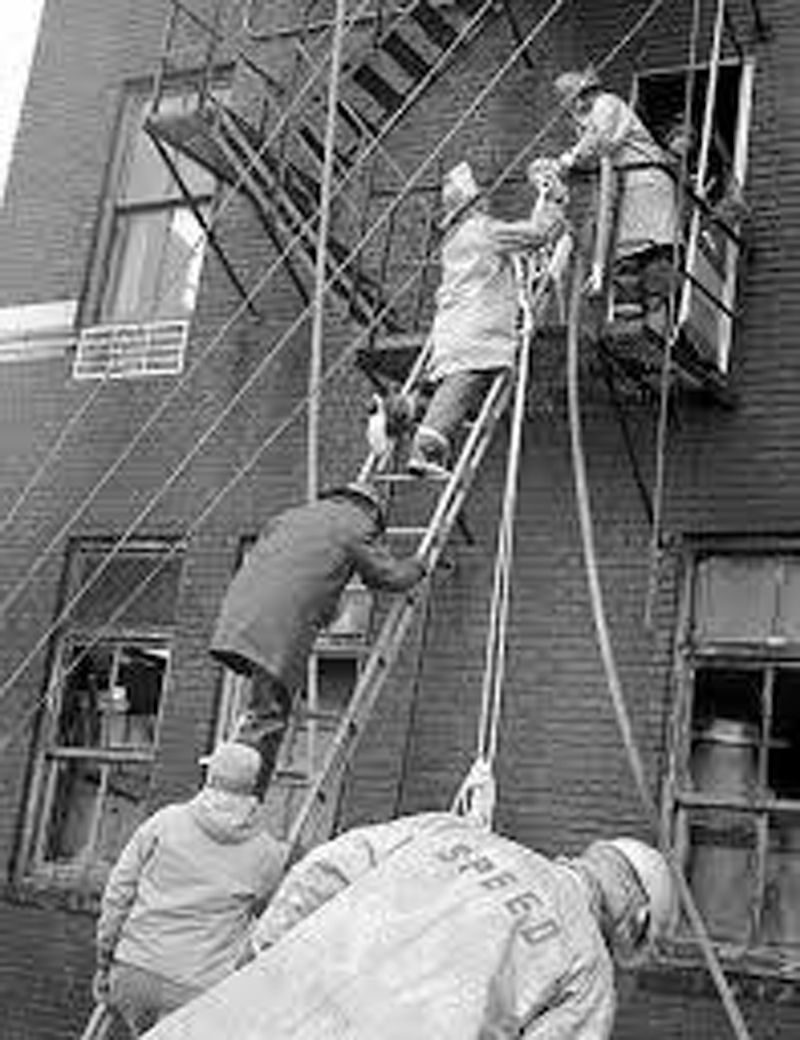 Firefighters work at the site of the Hotel Pathfinder explosion. Firefighters and ambulance workers came from several area towns to help local personnel. 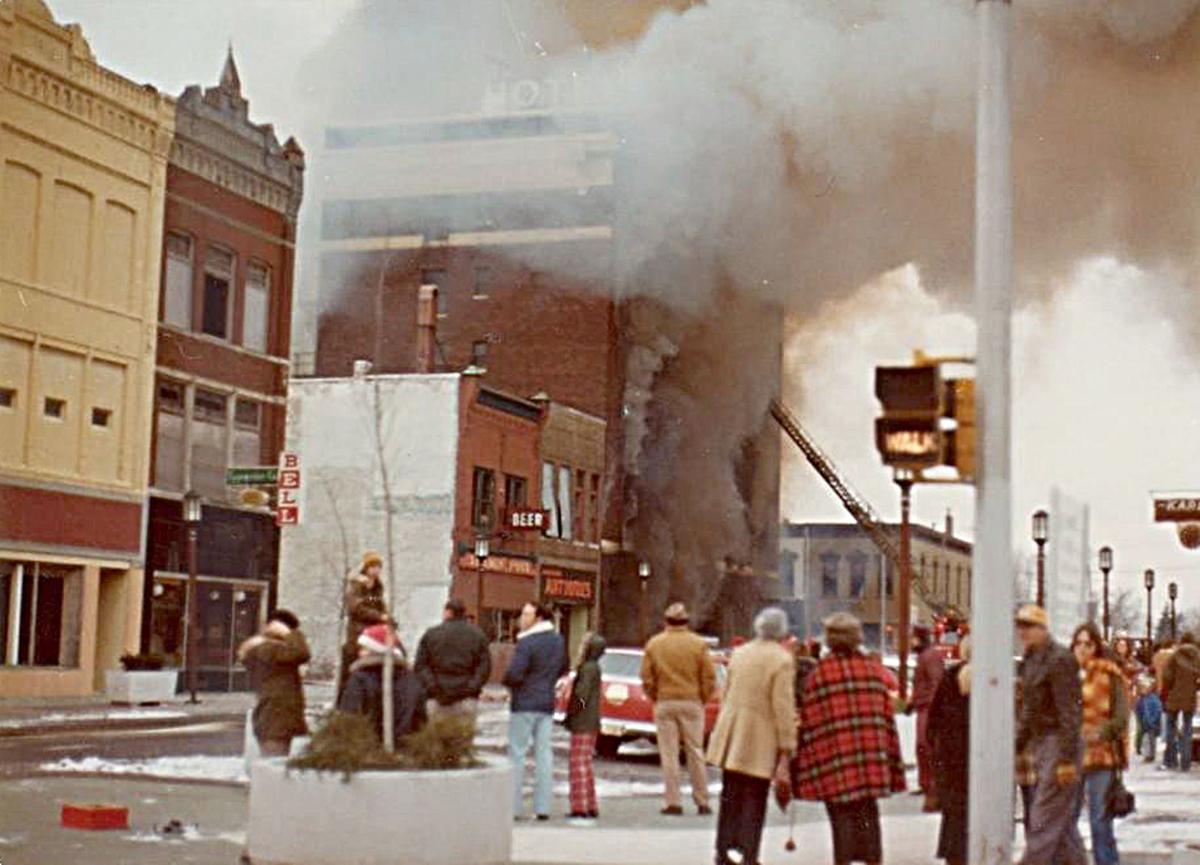 Area residents stand not far from the Hotel Pathfinder in 1976. 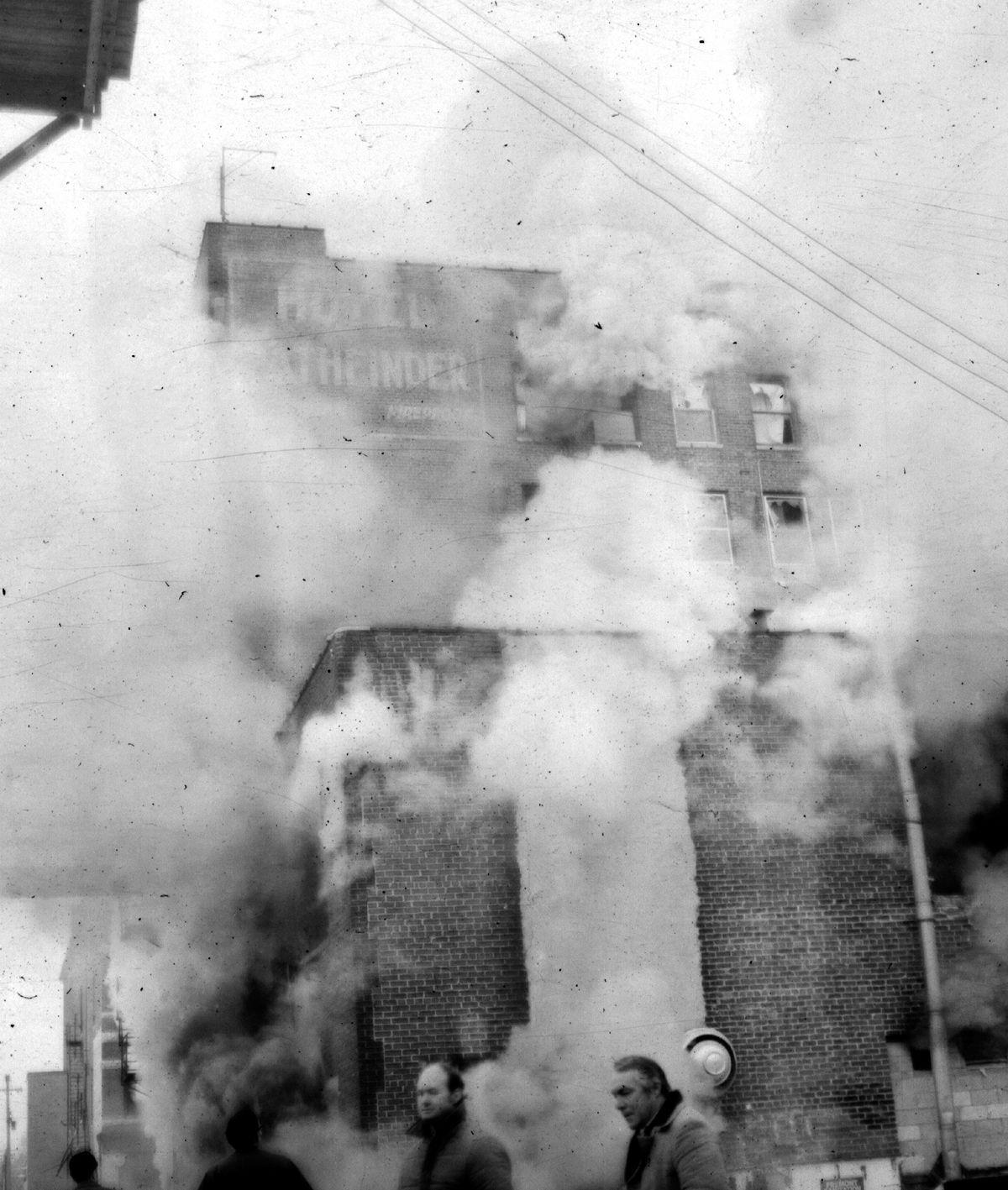 An explosion ripped through the Hotel Pathfinder and sent her tumbling into the basement, where the Fremont woman later feared she might drown.

It was terrifying experience she still remembers 45 years later.

Many local residents like Cone recall the natural gas explosion that tore through the grand six-story Hotel Pathfinder on Jan. 10, 1976. The blast claimed 20 lives and injured at least 40 more.

No one knows what ignited the blast, but former owner, Boyd Hammond, told the Tribune years later a coupling popped off an underground plastic pipe, which had contracted each year as it froze during the winters, letting gas seep through the dirt under the street and into the hotel.

When the building exploded, the blast soared up through the elevator and mushroomed on the sixth floor, said former fireman Don Sawyer in a 1999 account.

Much of the hotel’s first two floors, which included a barbershop, drug store, lobby, lounge, dining room, ballroom and business offices, fell into the basement.

Debris flew in the air and chunks of concrete were blown into the street. Smoke engulfed the hotel. Surrounding buildings were heavily damaged.

Before the explosion, townspeople had meetings here. People lived in apartments upstairs. John F. Kennedy spoke briefly at the hotel in 1959, prior to becoming President of the United States.

The explosion, later listed as the deadliest blaze in Nebraska in the 20th century, led to the end of a downtown Fremont landmark.

Cone went to work at Brown Drug Store inside the large hotel.

The 20-year-old wife and mother was waiting on a customer when she heard people talking about a natural gas odor. Soon, she and others were told to evacuate. Cone was going to get her purse and coat, when the phone rang. Pharmacy tech Delores Fritz went to answer the phone.

An explosion ripped through the hotel.

“I never made it to my purse or my coat,” Cone said.

Earl Wiegert was cutting a customer’s hair in his barbershop across the street from the hotel.

The blast broke windows, tore off the door and propelled Wiegert and his customer back across the shop.

Judy Nelson-Rohrig planned to pick up some Christmas photographs at Brown Drug Store, where her mom Delores Fritz worked.

Nelson-Rohrig forgot about the pictures.

“Otherwise, I would have been at the drug store with my mom and Marla (Cone),” she said.

Instead, she went to work at Nelson Upholstery shop at Fourth and H streets.

She wasn’t there more than three minutes when the explosion occurred, shaking the store’s windows. Even in the brutally cold winter weather, she rushed outside.

“At that time, you could see the debris in the sky,” she said. “I ran down Fourth Street to Broad Street and looked and I could see the hotel. It looked like a war zone.”

Hammond and his wife, Louise, co-owners of the hotel, were getting ready to attend the funeral of their 24-year-old daughter Ann, who’d been murdered in Lincoln by her estranged husband.

“I hate to tell you this, but your hotel just blew up,” Schafersman said.

“Flames billow out the west door of the hotel. It isn’t a door anymore, but a large gaping black hole. Firemen run back and forth …. on about the fourth or fifth floor, there is this head, this face in the window that appears and then disappears behind the billowing smoke.

“‘They’re coming!’ you shout, but you can’t tell if she hears you.

‘‘Four men rush by with a ladder … A policeman stumbles on broken glass covering a piece of concrete about four feet square … the (Vienna) bakery is across the street … Most of the front of the bakery is blown in … a few doughnuts with colored frosting lie on the sidewalk….”

Cone, who’d been in the drug store, ended up in the basement in a pile of rubble.

“I heard the firetrucks coming and in my mind I had to get to higher ground. With the water coming in (from the hoses), I thought, ‘I don’t want to drown.’ So I made it to this old heat register … I was on that,” she said.

People had begun calling for help.

“I heard screaming,” Cone said. “Everybody was yelling, ‘Help me, help me!’

“And one of those voices was obviously mine.”

Her long hair, which had extended to her back, was now singed up to her shoulders.

Soon, men came down a ladder. Her leg was wrapped in a splint.

“We’ve got to hurry,” the men said. “It could explode again.”

Cone wrapped her arms around the neck of a rescuer, who got her up the ladder and into a rescue squad.

Once at the local hospital, a doctor cleaned up Cone’s leg.

“They said it looked like I’d been through a meat grinder,” she said.

Cone had a broken left ankle, a compound fracture in her left leg, second and third degree burns on her face and arms.

When Wiegert regained consciousness, his customer was gone. Still in shock, the customer had gone to another barber who finished his haircut.

Wiegert’s son, John, was home when his dad, also in shock, came in the door — covered in dust, broken glass and small cuts.

Nelson-Rohrig, who ran to the area after the blast, remembers seeing curtains flying out of windows and hearing older people on top floors screaming for help. Her mother was in the drug store at the time of the explosion.

“I knew at that point she probably would never make it out alive,” Nelson-Rohrig said.

She contacted her two sisters and two brothers. Someone said they’d seen their mother taken to the local hospital. So the siblings went there and waited in hopes that their mother had survived.

Eventually, they were sent home.

Hammond later described his own disbelief. First, the Hammonds had lost their only child — their petite, hazel-eyed daughter, whose body was found Jan. 7 under ice in Lincoln’s Pawnee Lake.

Now, they’d also lost their business, along with friends and acquaintances, who had died.

“I was beyond shock, because I was already in shock from my daughter,” he said in a Tribune article 25 years after the explosion.

Cone was taken to what was then Omaha’s Clarkson Hospital, where she was in an intensive care unit for a week. She was hospitalized for nine weeks total.

“I was in traction because of a compound fracture above my left knee,” Cone said.

At eight weeks, Cone was put in a body cast from her chest to her ankle. After her time in the hospital, she was brought home to Fremont by ambulance, where she stayed in a hospital bed in her living room and needed 24-hour care.

She and her husband’s daughter, Carrie, turned 1 year old on Jan. 11 — just a day after the explosion.

Rohrig-Nelson and her siblings waited three days before they learned what had happened to their mother.

“It was Tuesday when they finally found her,” Nelson-Rohrig said. “She was in the basement with Marla (Cone).”

Fritz’s children identified their mother by a charm bracelet with pictures of her grandchildren.

About 25 years later, Nelson-Rohrig was told that her mother — who’d gone back to answer the telephone — still had it in her hand when she was found. She had burns, but probably never felt anything because of the explosion.

Her children cherish good memories of their mother.

“She was a tremendous role model for her five kids,” said daughter, Terry Rohloff. “She loved the grandkids and spent time with them. She was always there for us.”

But longtime friend Kiel Eltiste owned a barbershop down the street. Eltiste invited Wiegert to work in his shop until those repairs were complete.

Decades later, Eltiste would relocate his own shop in the spot where Wiegert had survived the explosion and gone on to give many haircuts.

Wiegert, 92, was the last person to receive a haircut in that shop at 94 W. Sixth St., on the day of New Year’s Eve in 2020. Kiel’s Barbershop moved to 88 W. Sixth St. Connie Dostal is the owner and Eltiste is her employee.

Hammond, now deceased, was 82 when he told the Tribune how he believed his faith helped his wife and him through those horrible times.

“We had a lot of faith in God and did a lot of praying,” he said, adding that they’d forgiven the man who murdered their daughter. “You can’t live with that hate.”

Decades after the explosion, Cone still walks with a limp.

On Friday, she shared thoughts about the disaster. She said the memories are still fresh. She remembers the weeks in the hospital and the long recovery.

But she also recalls the kindness shown to her.

“People I didn’t even know sent me cards and good wishes,” she said. “I received over 100 cards while in the hospital. Everyone was very thoughtful.”

WATCH NOW Man has last haircut in barbershop before it moves

Dodge County Supervisor-elect Pat Tawney will join the county’s board of supervisors for its first meeting this year on Wednesday.

Julie Sleister has seen the face of need in a big way.

Mickey Boell has been on a journey of trust.

Suzanne Smith describes the layers of worry and fear.

The Hotel Pathfinder explosion on Jan. 10, 1976, in Fremont killed 20 people and injured more than 40. It changed the face of downtown.

A 5-foot-tall monument honoring the 20 people who died in 1976 due to the Hotel Pathfinder explosion was unveiled in the afternoon on Jan. 10, 2016. The monument is in the city-owned green space at Sixth and Broad streets.

Firefighters work at the site of the Hotel Pathfinder explosion. Firefighters and ambulance workers came from several area towns to help local personnel.

Area residents stand not far from the Hotel Pathfinder in 1976.