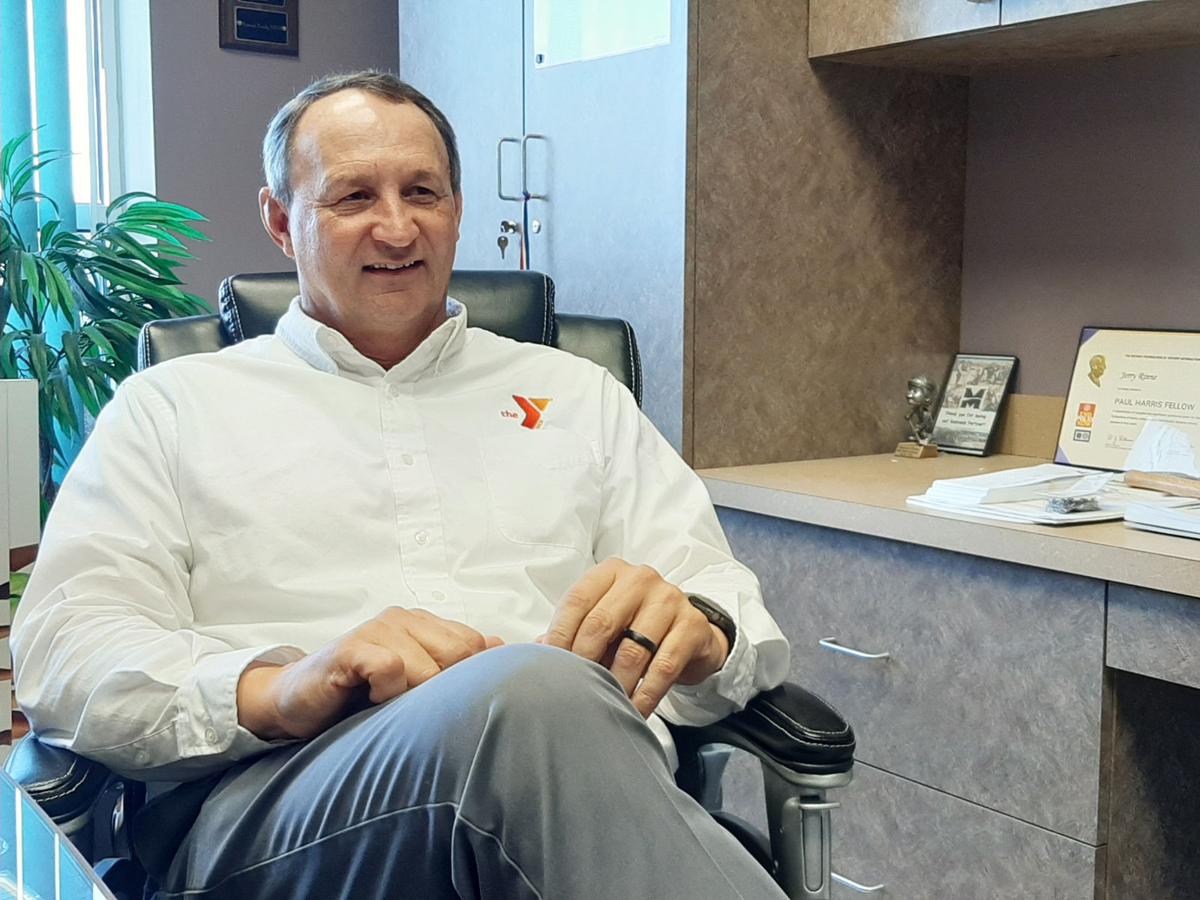 Jerry Rinne, president and chief executive officer of the Fremont Family YMCA, pauses to remember times from 33 years at the Y. He is retiring Dec. 17. 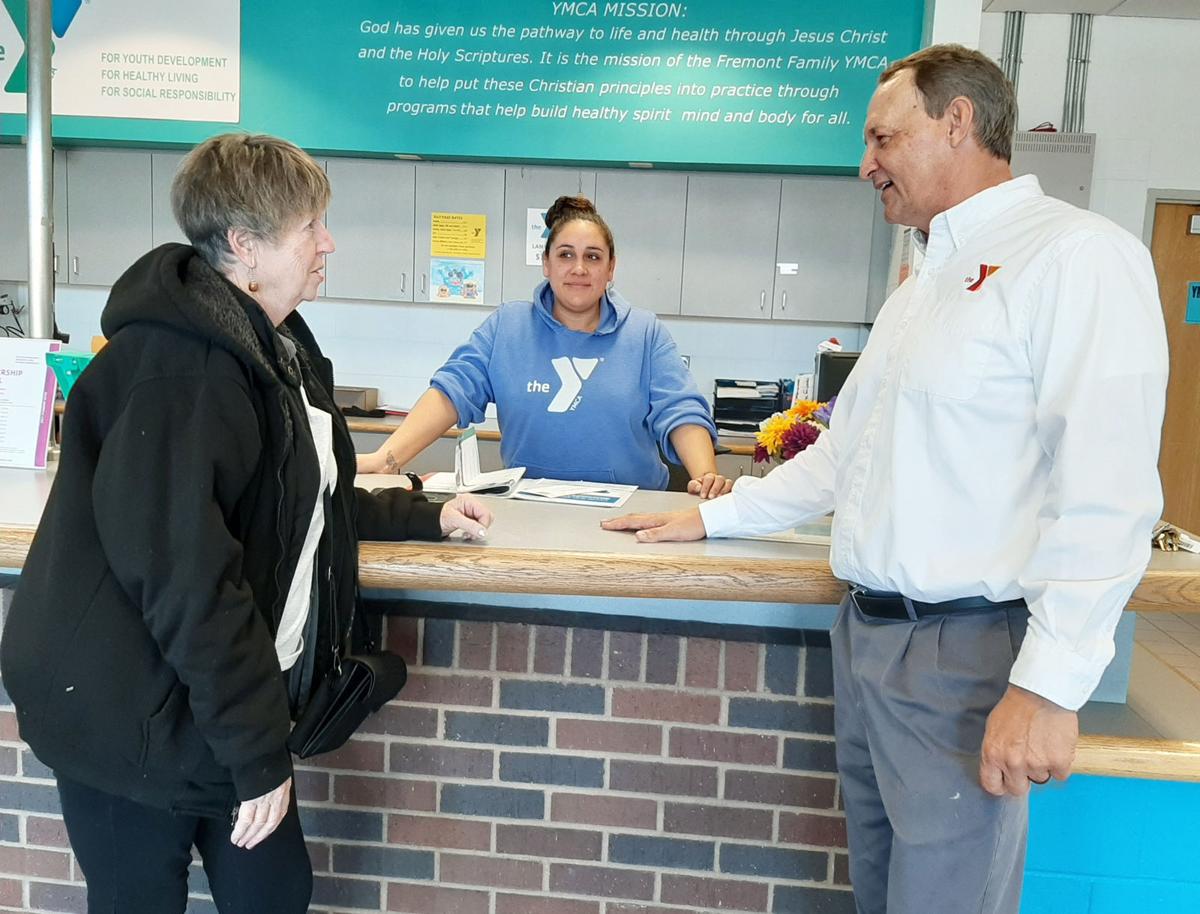 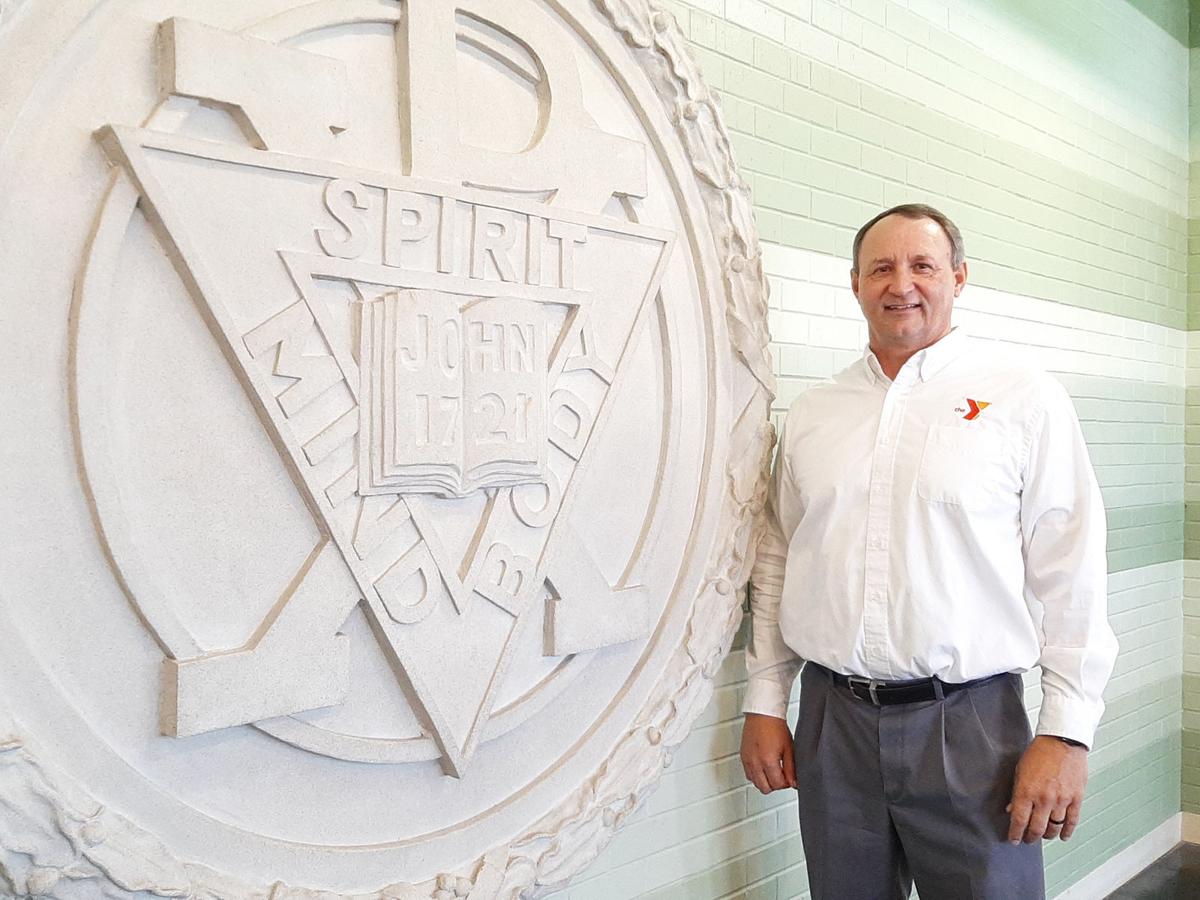 Jerry Rinne, president and chief executive officer at the Fremont Family YMCA, stands near a logo in the Wellness Center. Rinne will retire Dec. 17. 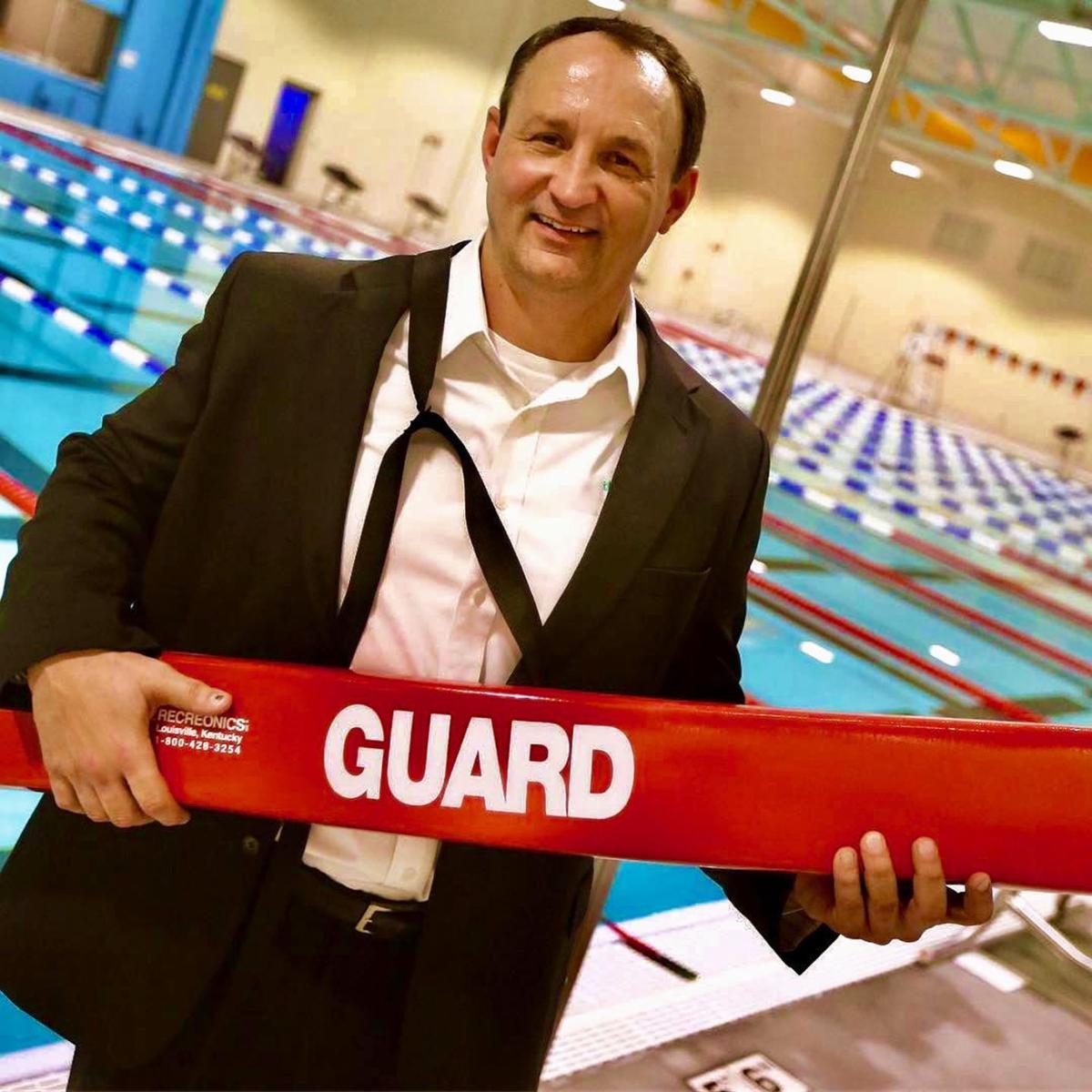 Jerry Rinne, president and chief executive officer of the Fremont Family YMCA, is shown near a pool in the facility.

One time, an elderly woman fell at the Fremont Family YMCA.

She wouldn’t let staff call a rescue squad. So rather than let her leave by herself, Rinne, longtime head of the Y, drove her to the hospital.

Throughout his 33 years at the Y, Rinne has jump-started cars and changed flat tires for patrons in the parking lot. He shoveled snow, spread ice melt and helped push out snowbound cars. He’s given patrons rides home.

Many people know Rinne for the friendly smiles he extends to members and guests — from little kids to older folks.

Now, Rinne will retire from what’s become the largest square-footage YMCA in the nation. His last day is Dec. 17 and he leaves with a myriad of accomplishments.

Since 2003, Rinne has served as president and chief executive officer of the Y and has overseen $32.1 million in fundraising for its construction projects. He oversees a staff of about 28 fulltime employees and 450 to 500 part-time workers.

Rinne has weathered difficult seasons, like when a tornado damaged the Y in 2011, and the more recent COVID-19 pandemic. At age 57, he looks forward to spending more time with his wife, Jodi, and 7-month-old son, Rhett.

Originally from Beatrice, Rinne went to what’s now called Midland University to become a teacher and coach. There, he completed a monthlong internship at the Y. He helped with youth sports, front desk duties, swim lessons and building supervision.

After Dan Carmen was named CEO at the Y, a couple of staff positions became available.

“He knew I did a nice job as an intern so he hired me as youth sports director,” Rinne said.

Rinne was in charge of youth sports staff and volunteers along with several programs, from flag football to summer camps.

And this was before the Y had computers, which meant typing up or writing out information. Rinne spent lots of time calling volunteers and staff in an era before email.

He worked lots of hours, but loved the work.

“I liked the atmosphere,” he said. “People were excited to come to the Y. If you buy a membership, you’re coming to the Y because you want to be here.”

He became president and chief executive officer in 2003.

During his time as CEO, Rinne has served as construction manager, overseeing the work, and fundraising for projects. The projects include:

Today, the YMCA spans approximately 260,000 square feet under one roof.

An old swimming pool has been converted into a new turf room for activities such as baseball, soccer, fitness testing and birthday parties. Another swimming pool was filled in with concrete and turned into a cross-training room.

In addition, the Y includes the separate, 120-acre, Christensen Family YMCA Camp, about 1 ½ miles west of Fremont off Military Avenue.

As the Y’s size has increased, so has its programming.

It serves between 70 and 80 kids fulltime in it childcare facility. It provides programming before and after school at the local elementary schools and at the Y.

“What’s great about the Y is it brings people of all ages,” Rinne added.

The youngest person coming to the Y is 6 months old. The eldest member is about 97.

Rinne said the Y has been a great place for senior citizens, whose spouses have died and whose children may live far away. They can take part in classes such as water aerobics, fitness, Tai Chi and dance.

“It gives them the opportunity to stay fit and have the social interaction they need as well,” he said.

In the last couple of years, the Y has offered a Master Swim program for people 50 and above with a forthcoming swim meet.

Throughout his time at the Y, Rinne has enjoyed interacting with Y members, staff and volunteers.

“Every day is a different day and you can learn from people on a daily basis — from a 5-year-old child to a businessman who’s very successful in the community and anyone in between there,” Rinne said.

People have told Rinne how his saying, “Hi,” encouraged them during times when their family lives weren’t going well.

Getting kids involved in programming where a mentor/instructor has been able to teach them something new has been important, too.

“If you can give kids hope, you give them purpose,” he said.

Rinne appreciates earlier times in this career, when children would hug him in a grocery store and say something like:

He knows the Y can impact lives.

“You don’t realize how many thousands of people that you’ve seen or taught or hired them as staff,” he said.

Rinne has enjoyed success with local nonprofits, which each have their special niche, and Midland. In 2006, the Y and MU each planned to build a wellness center.

Rather than having two centers, six blocks apart and tapping the same donors, Rinne and Midland developed a partnership. That way, MU students would use the Y’s center.

“We’ve had some really great donors,” he said.

Rinne notes that donor relationships can take three or four years to develop.

Currently, the biggest program is SwimMates, funded by RTG Medical, during which every first-grade student in Fremont is taught swim lessons and water safety.

“We provide swim trunks and towels for kids who can’t afford them,” Rinne said. “RTG provides volunteers, also, for the lessons.”

Donors have been able to see kids who were afraid to get in the water reach the point where they don’t want to get out of it.

During his tenure, Rinne has seen tough times as in 2011 when tornadic winds hit without warning. They tore off part of the Sidner gym roof and threw air conditioning equipment in the parking lot leading to $1 million in repairs.

In 2020, the Y had the first case of COVID-19 in the state and was one of the first Ys in the nation to close. The Y worked with Three Rivers Public Health Department, MU, Methodist Fremont Health and local school systems to develop safety protocols.

The Y had to furlough staff and shut the building for a while. The Y received some government funding as struggling families dropped their memberships.

Due to COVID, the Y lost between 35% and 45% of its membership. It now has about 7,500 members, but that number is increasing along with programming.

Staff, who weren’t furloughed, made phone calls to seniors and other members. Staffers delivered care packages, too.

The Y checked out equipment and had instructors teach classes via Zoom.

“We still continue to do that today,” Rinne said.

Rinne has enjoyed his time at the Y.

“It’s been fantastic. I couldn’t have asked for a better job,” he said.

The Rinnes plan to remain in Fremont and take their son to the Y’s childcare center. He will look for a different type of work later.

In the meantime, he expresses deep appreciation for the Y and its hardworking staff.

“You can always have a great day at the Y,” Rinne said. “You’re going there for a reason, to better yourself, to get fit, to meet new people, develop new friendships and learn a skill.”

As he looks toward retirement, Jerry Rinne is grateful for the role he was able to play in Sidner Ice Arena’s construction.

It was the case of the missing mugs.

Fremont-area calendar of events for Dec. 7-9

Find out about May Museum's Christmas Walk, Pet Pictures with Santa, a Winter Wine Walk and more.

“Open for Business: A Nebraska Women in Agripreneurship Series” will feature Kara Sousek, of Oak Creek Vineyard, during its next live webcast …

If Fremont pet owners are looking for a place to give their furry friends some Christmas spirit, FurEver Home Inc., has them covered this week.

Aaron Smith is looking forward to the Pathfinder Chorus Christmas concert on Dec. 18.

Ellen Lund loves being part of a chord.

Three nonprofits to benefit from Jumpstart program in 2022

Raising funds can be a challenge for any nonprofit.

For Mackenzie Kirby and her peers, a recent Christmas shopping trip was more than a fun experience.

Jerry Rinne, president and chief executive officer of the Fremont Family YMCA, pauses to remember times from 33 years at the Y. He is retiring Dec. 17.

Jerry Rinne, president and chief executive officer at the Fremont Family YMCA, stands near a logo in the Wellness Center. Rinne will retire Dec. 17.

Jerry Rinne, president and chief executive officer of the Fremont Family YMCA, is shown near a pool in the facility.