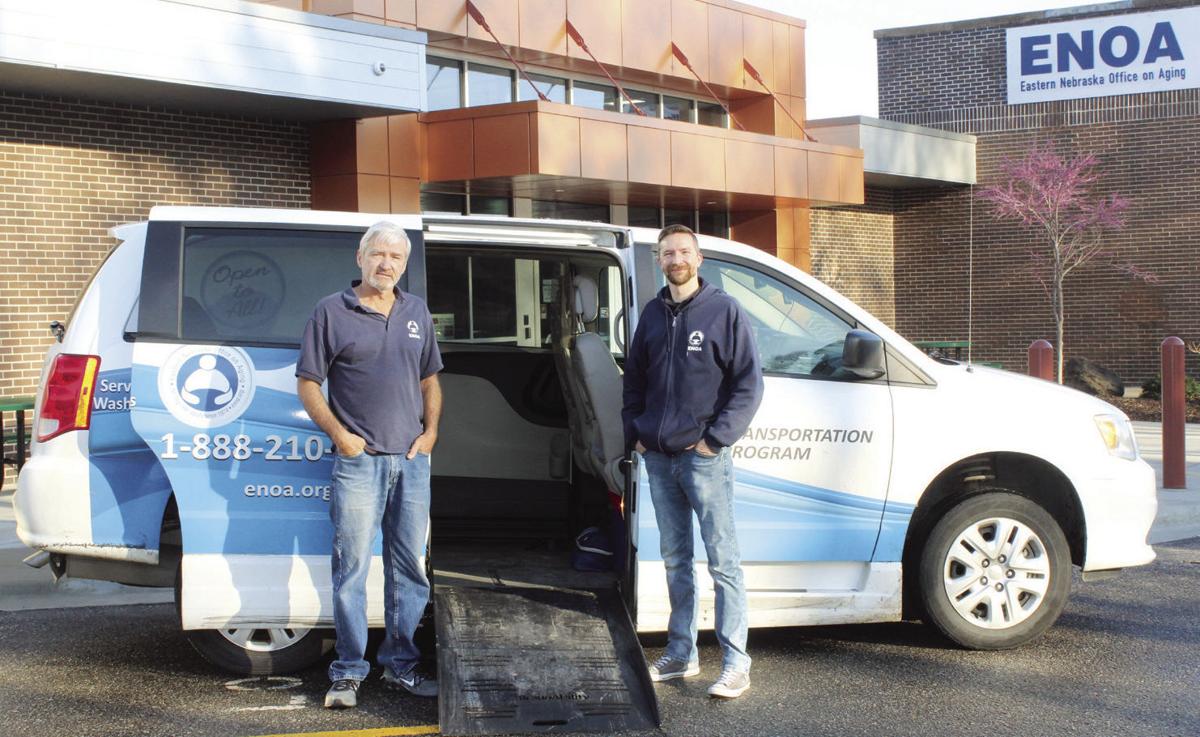 Gordon Mix, left, and Brian Hatfield of the Eastern Nebraska Office on Aging's Rural Transportation Program stand in front of a vehicle driven for the service. 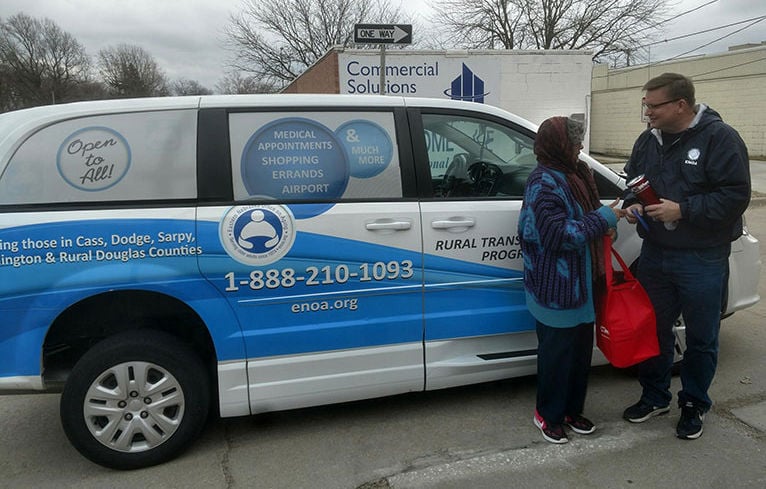 Kevin Engstrom, driver for the Eastern Nebraska Office on Aging's Rural Transportation Program, right, talks to a passenger during a photoshoot with the University of Nebraska Omaha's Center for Public Affairs Research in 2018.

In early April, Fremont City Cab shut down its business after almost 40 years of service.

For people like Brenda Zens, the cab company was the only way Fremont residents with disabilities could get groceries or visit the bank.

"It's not just us disabled people, it's people that don't have driver's licenses for one reason or another," she said. "I know I'm not the only person out there that has problems, but even trying to look for a job that I might be able to do, I can't do that because I don’t have the resources to."

But the Eastern Nebraska Office on Aging's Rural Transportation Program plans to fill a void in Fremont's transportation options for those unable to drive on their own.

In July, the program plans to have more of its drivers serve those in rural areas with both handicapped and non-handicapped accessible vehicles.

"The urban drivers who are doing urban now will become rural drivers because of the elimination of the urban portion of the service," Program Coordinator Brian Hatfield said. "So I'll have more drivers available on July 1 that I'll be able to send up into Fremont and pick up more people or go into the Hooper and Dodge areas and stuff like that."

Zens has akinetopsia, a condition that causes her to lose the ability to perceive visual motion.

"I have to blindfold myself whenever I go outside," she said. "I can't drive, and it's been becoming harder and harder."

In the past, Zens said she utilized the Office on Aging's Car-GO program for seniors before it was shut down due to COVID-19.

"The bus system has stopped, too, because they said people didn't use it," she said. "And then all we were left with was the taxi service, and then they finally stopped."

As she uses an Electronic Benefits Transfer for her groceries, Zens said she has to drive to pick them up. She said she feels like a "burden" having to ask one of her daughters or someone from her church to give her a ride.

"It just makes it hard for a disabled person, because there is absolutely nothing," Zens said. "I've even tried contacting Walmart because they're supposed to deliver, plus they do the EBT with deliveries, but they don't do it in this town."

Zens said she knows others in the Gifford and Stanton Towers who relied on the cab service to get around.

"My daughter, she works as a bartender, so she was telling me about the problems they were having there with people wanting to be responsible," she said. "But how can you be responsible if there's no taxi service or there's no way to get you home?"

For people who need services like dialysis several times a week, Eastern Nebraska Office of Aging Community Services Division Director Chris Gillette said a one-way trip can run up to $75.

"That's going to add up quickly two or three times a week," she said. "So I don't think that there's ever been enough transportation options available in the rural community."

Although the Rural Transportation Program is run by the Office of Aging, Gillette said the program is for all ages.

"So people in the Fremont area going to the grocery store, I would imagine that's going to fall within the one-to-10-mile range," Gillette said.

With the program's expansion, Gillette said the office is hoping to fill the gap left by Fremont City Cab.

"We hear quite often from people that they truly do not know what they would do without this service," she said. "Their family members may still be working full time, or they may not even have family members to call upon, or for someone who has become a little bit more dependent upon their family for other things, transportation may not be something that the family can offer."

With no services like Uber or Lyft in Fremont either, Zens said the community needs more opportunities.

"It's just sad," she said. "This is a big enough town that we should have a lot of different options, and it's just sad that everything that we've had has been canceled for one reason or another."

Ever wonder what to do with an old, worn American flag?

Fremont Public Schools recognized the retirement of nine certified teachers at the end of the 2020-2021 school year.

From the panhandle to the Nebraska State Capitol, volunteers with the Pony Express Ride will ride their motorcycles more than 600 miles across…

A petition to recall Fremont City Council President Mark Legband has been filed at the Dodge County Election Commission office.

Mary Carreto-Lopez’s dream is to work, and her daughters are helping her realize that dream.

Fremont Friendship Center menu and activities for May 24-28

Find out what's on the schedule next week at Fremont Friendship Center.

Work on new electrical substation near WholeStone Farms moves along

Two transformers were recently placed at a new Fremont substation that aims to supply WholeStone Farms’ expansion with power.

WIC and immunization clinic set for May 27 in Blair

Northeast Nebraska Community Action Partnership will hold the Blair WIC and immunization clinic from 10:30 a.m. to 2:30 p.m. Thursday, May 27,…

Check out the area events and meetings taking place May 22-24.

Your guide to Fremont-area fairs and festivals this summer

What's going on this summer? Find out here with a list of all the Fremont-area fairs and festivals.

Gordon Mix, left, and Brian Hatfield of the Eastern Nebraska Office on Aging's Rural Transportation Program stand in front of a vehicle driven for the service.

Kevin Engstrom, driver for the Eastern Nebraska Office on Aging's Rural Transportation Program, right, talks to a passenger during a photoshoot with the University of Nebraska Omaha's Center for Public Affairs Research in 2018.