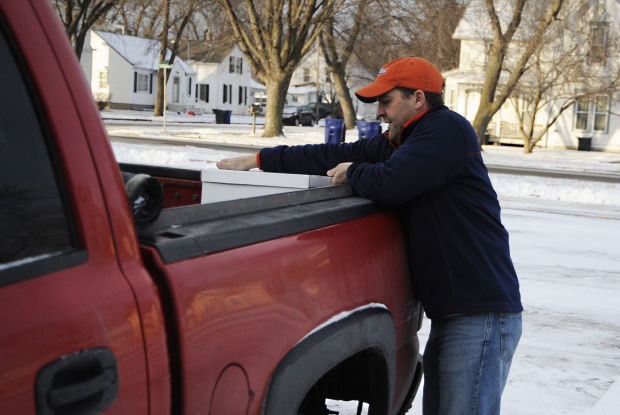 U.S. Senator-elect and outgoing Midland University President Ben Sasse loads boxes into his truck after cleaning out his office in the Anderson Complex Tuesday on the Midland campus. 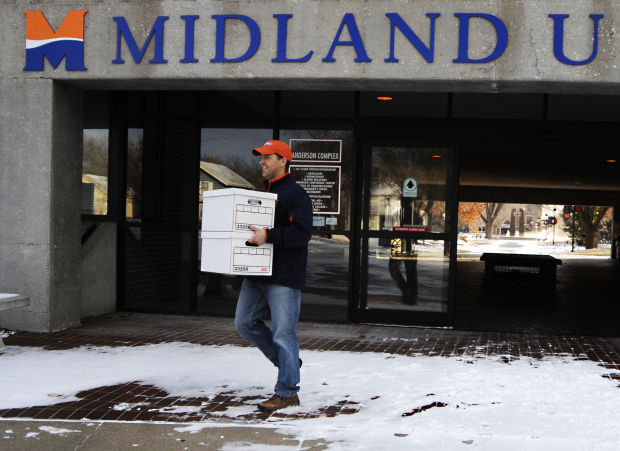 U.S. Senator and former Midland University President Ben Sasse carries boxes to his vehicle as he cleans out his office in the Anderson Complex in early January.

Dressed in jeans, a sweatshirt and Midland University baseball cap, Ben Sasse was loading up five years of memories this week.

The 42-year-old — he’ll turn 43 in February — was putting the last of the items he’s taking from his office into his pickup truck. His tenure as president of the Fremont university came to an end on Wednesday and he’s preparing for the next chapter in his life — becoming Nebraska’s next U.S. Senator in just a few days.

“I’m ready to fight hard for common sense,” he said earlier this week, sitting down for a 30-minute chat at the Tribune. “But I’m having very mixed feelings knowing we’ll have the family split up part of the year.”

“We absolutely love raising our kids here and want to keep doing that,” he said. “We want our kids to grow up working in Dodge County and doing farm labor. (Corrie already has been exposed to detasseling crews.)”

Sasse oversaw perhaps one of the greatest comeback stories for a small, private college.

He was hired by Midland in October 2009 and the future looked bleak. Funding was tight, enrollment was at historic lows and there was plenty of debt.

“I wasn’t officially supposed to start until April '10, but I had to start right away because we couldn’t make payroll,” he admitted.

Sasse pulled together a team to re-energize the institution — in the classrooms, on the playing fields and in its fundraising efforts. He put an emphasis on athletics, adding 11 variety sports for a total of 27. There also was a push to expand performing arts opportunities.

“We’ve built a heck of a team,” he said. “Midland is filled with really wonderful people who care about the kids yet to come to Midland. I am so honored to have been able to be on a team with those people, and that includes the administrative leadership team, the faculty, the board — so many donors and community partners. Our team at Midland includes lots of people who aren’t on the payroll.

“I think Midland has a future as bright as any moment in its 131-year history,” he added. “When you look forward and see what comes next, I think Midland’s going great places and it’s because of the caliber of the people who co-labor there.”

Yet it wasn’t all smooth sailing.

“Through May of '12, there were regular periods where it wasn’t clear we would make it,” Sasse said. “I would wake up in cold sweats twice a night, multiple nights a week from 2009 to 2012. As of May 31, 2012, we knew we had made it. Our enrollment was strong for a second consecutive year and a lot of donors and banks in the region agreed to a debt restructuring plan that made it clear to us that Midland was going to thrive again.”

First bolstered by an influx of students from Dana College, which closed in 2010, Midland worked hard to recruit more students from the Omaha metropolitan area. Back in 2009, Sasse explained, only about 39 percent of the high school guidance counselors in the Omaha area knew anything about Midland.

“Now Midland is a brand in Omaha,” he said.

“It’s not about wins or losses for those sports teams, but it’s about the breadth and depth of the rosters on those teams that’s reflective of how successful recruiting had been,” Sass said.

“The idea of a thick community is part and parcel to what the Midland experience is about. We think that life transformation doesn’t just happen in the classroom. It happens in the residence hall and in the dining room and on the field, court, track, mat, performing arts stage, because that’s where people strive for excellence and partner with their teams.”

Sasse has had fun the past few weeks, gearing up for his freshman year in the Senate.

“We’ve had a busy few weeks, but it’s been a lot of fun,” he said. “The caliber of people who have reached out wanting to work on our Senate governance team has been extraordinary. The Midland handoff has gone so smoothly. Jody Horner is a great get for Midland. … Everybody is just thrilled to have her.”

There is still one outstanding item that is being addressed in the Sasse household. Prior to running for office, Sasse talked with his family about the difficult nature of a statewide election and the time it would take.

His daughters had one request if he won: A dog. To be clear, 11-year-old Alex said it was a dog for each election won, Sasse said.

“There is some negotiation between the spouses at my house about the dogs’ arrival,” he said. “But the dogs will come.”

A driver was transported to a local hospital with non-life threatening injuries after a one-vehicle accident on Military Avenue in Fremont.

At approximately 12:25 a.m. April 11, Andrew R. Christensen, 32, of Fremont was arrested on suspicion of third degree assault and disorderly c…

At approximately 3:30 a.m., April 11, Tomas M. Montejo, 20, of Fremont was arrested on suspicion of driving while under the influence of alcoh…

The Nebraska Game and Parks Commission confirmed the third instance in 20 years of a gray wolf’s presence in the state of Nebraska Wednesday.

CASA of the Midlands advocates sworn in during Tuesday ceremony

Four volunteers have taken the step to become advocates for neglected and abused children in Dodge County.

U.S. Senator-elect and outgoing Midland University President Ben Sasse loads boxes into his truck after cleaning out his office in the Anderson Complex Tuesday on the Midland campus.

U.S. Senator and former Midland University President Ben Sasse carries boxes to his vehicle as he cleans out his office in the Anderson Complex in early January.