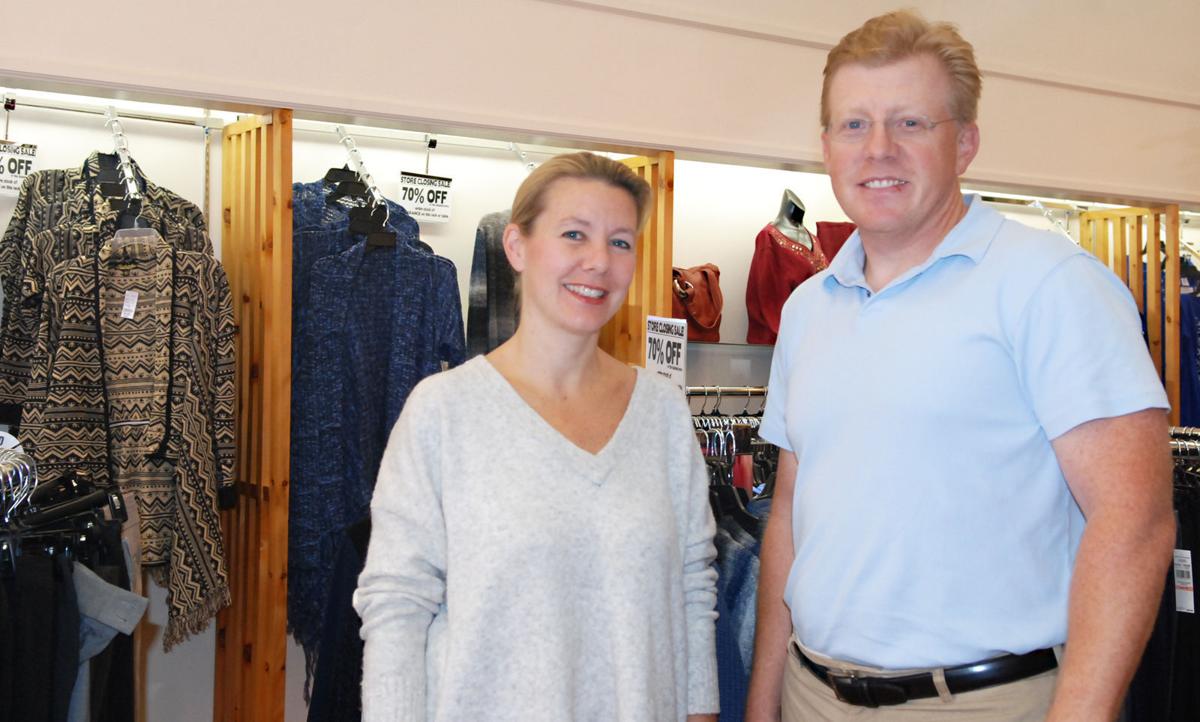 Betsy Hocking, vice president in charge of purchasing, and Ty Smith, company president, stand inside the Schweser's store in Fremont. The company announced in September that it will close all 20 of its stores after the holidays. Schweser's was among area businesses that in 2015 closed or announced plans to close. 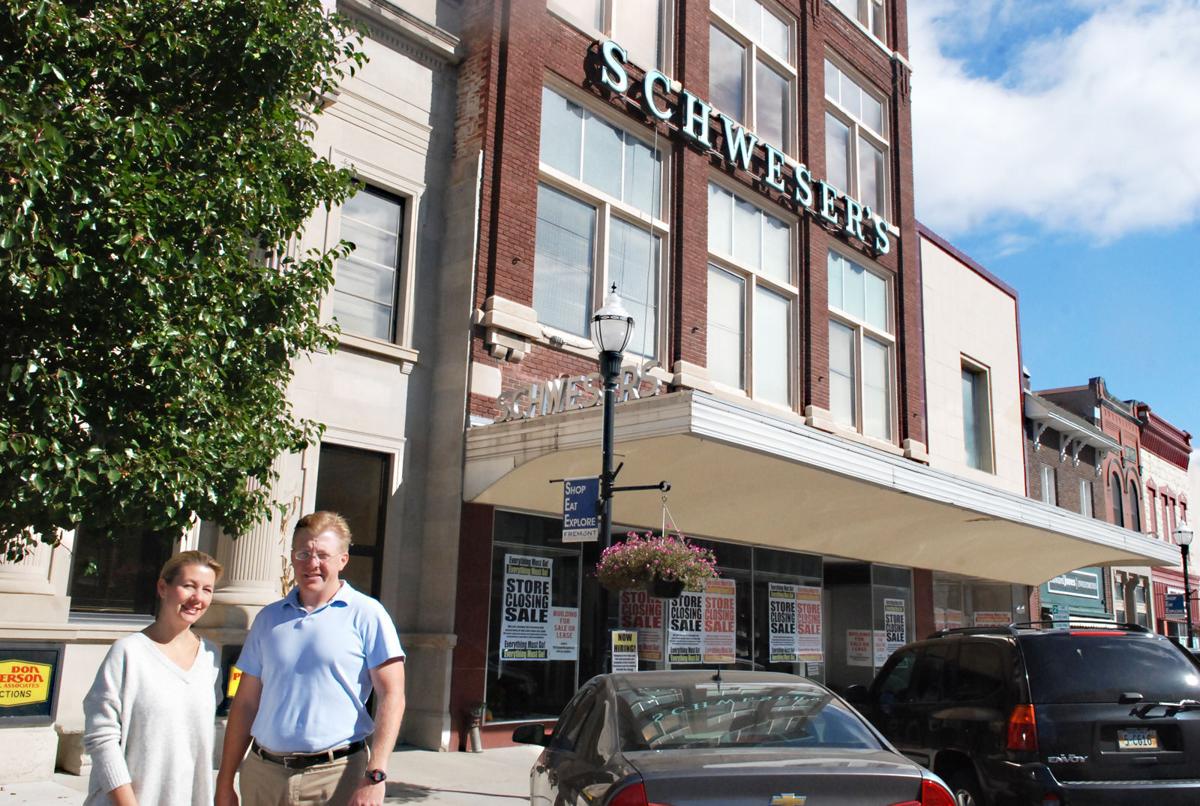 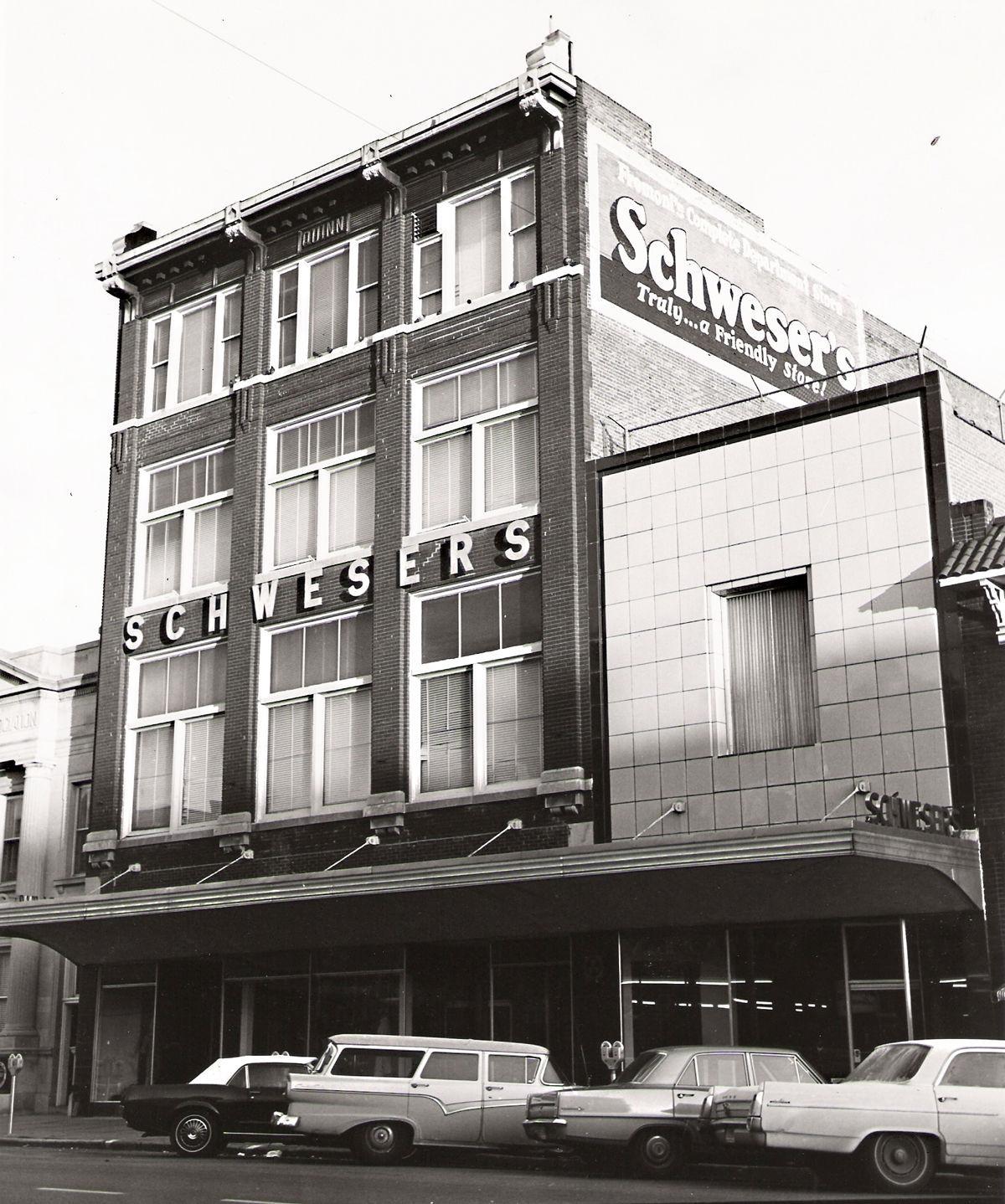 This is a photograph of the Schweser's store in downtown Fremont in the 1950s. 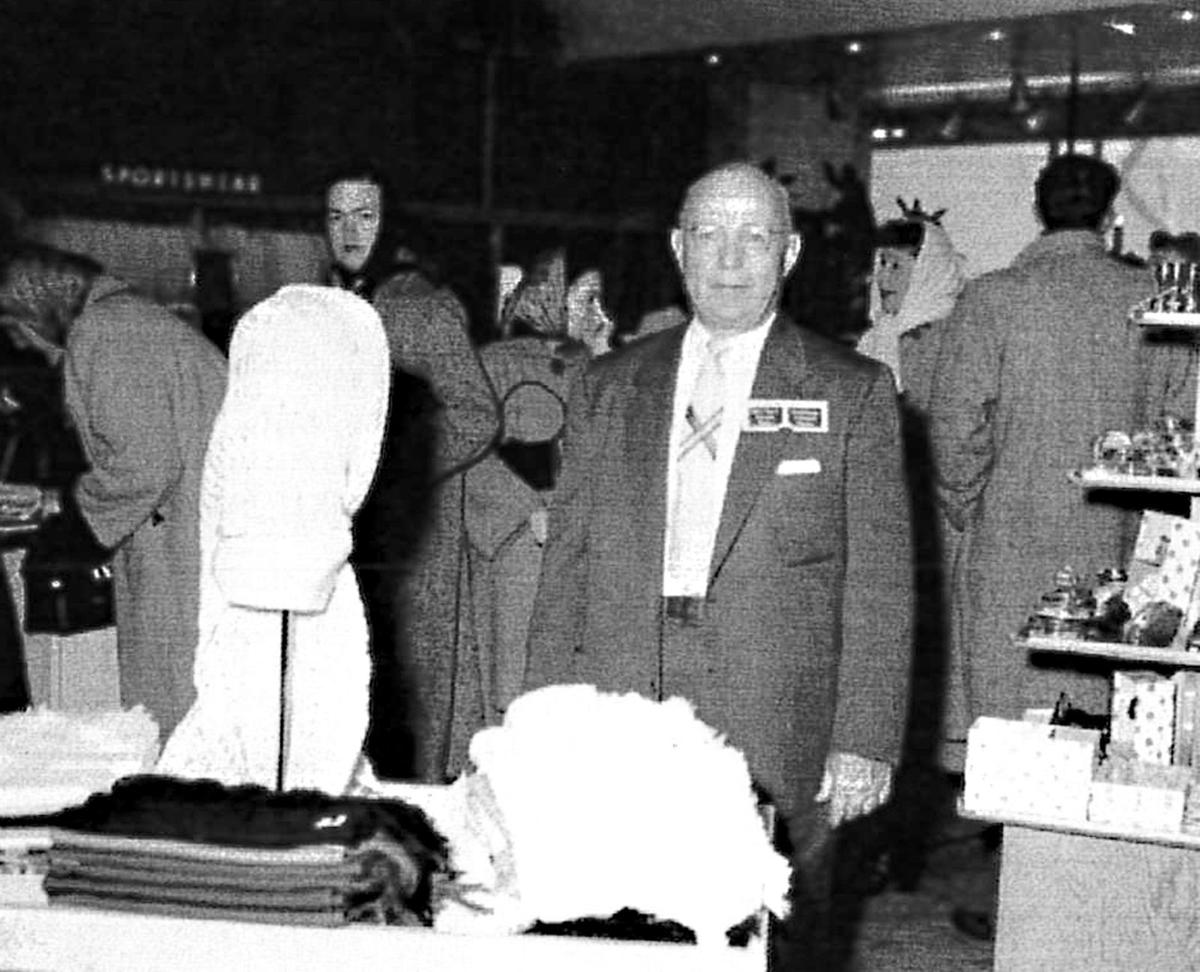 This is an earlier photograph of Fred Schweser, who owned and operated the Schweser's stores. 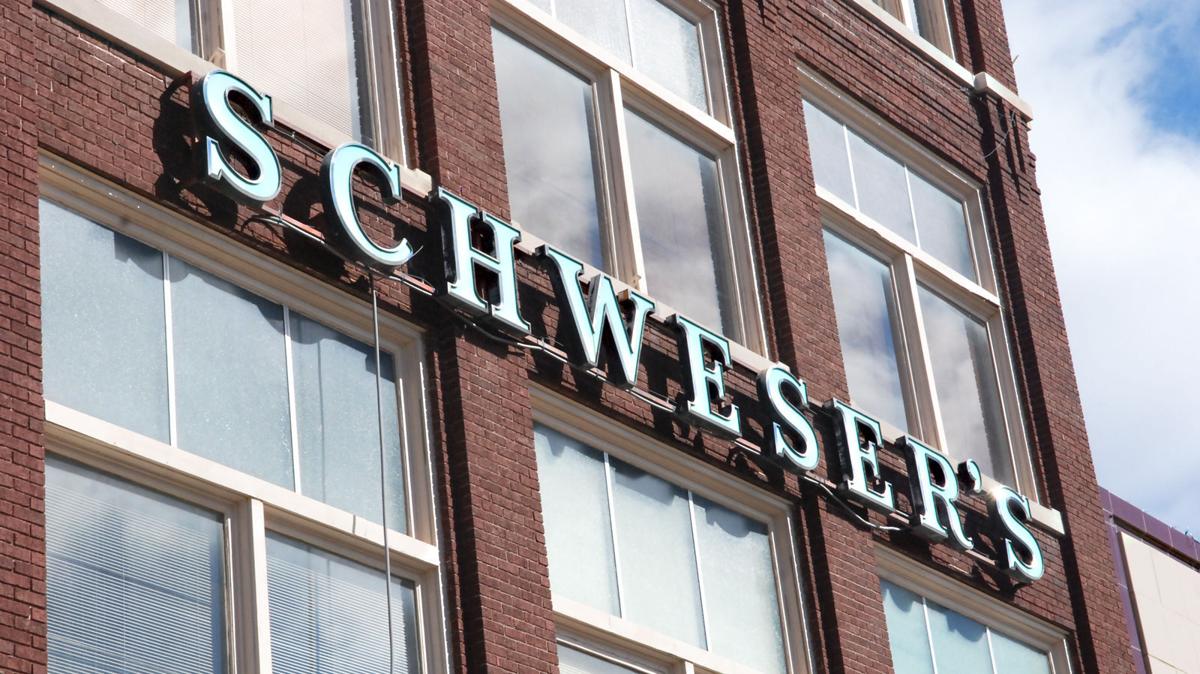 The Schweser's store has been part of Fremont's downtown section for decades.

Retired from the business that bore his name, Schweser was in his 80s when he disappeared one summer day. As it turned out, Schweser wanted to attend a trade show in New York City. So he and Clyde Hansen, the company’s handyman, took a day trip to the big city without even telling Schweser’s wife.

Schweser’s daylong vanishing act caused quite a stir and would become yet another story in the company’s multifaceted history.

Now — after 135 years — the company announced in September that it would close all of its 20 stores, including the one in Fremont, after the holidays.

Ty Smith, company president, said approximately 30 of the company’s 140 employees work in the Fremont store. Citing that trends in sales, expenses, retail shopping and demographics had been against the stores for a few years and — despite attempts to find the right path to profitability — the business had reached an end, Smith said.

The Schweser’s stores began after George Schweser, a German immigrant who’d apprenticed in a retail store in Illinois, went west to buy his own store — walking the last 100 miles instead of taking a horse and buggy so he wouldn’t waste any of the $700 he’d saved.

He bought a general store in David City. In 1924, George’s four sons joined him, two of whom later went into other businesses. Harold and Fred operated the store with their father, who retired in 1928 and died in 1932.

The two brothers purchased another store in Columbus in 1929 from Theodore Friedhof, who came with the business.

“Mr. Friedhof adored my parents and really wanted to be part of the transition,” Barbara Schweser Smith said.

Friedhof was a frugal man, who sent money with people to pay bills rather than use an envelope and stamp. Labor was cheap and stamps expensive, reasoned Friedhof, who’d even remind the errand boy to bring back the paper clip.

Ten years later, the Schweser’s organization bought the Fremont store from the Thad Quinn estate. People went wild about sales of items from the former Quinn store. The store was packed with bargain-seeking customers, who even tried on clothes in the aisles when the dressing rooms were full.

The first thing the Schweser brothers did was throw out the stools so sales associates couldn’t sit down.

“You can’t wait on the customer if you’re sitting on a stool,” Fred said.

“It was his philosophy that the customer was always right and deserved to be waited on,” Barbara said. “He felt the customer didn’t need somebody sitting behind the counter staring at them. He was so customer-service oriented.”

A year later, Harold died in a terrible accident. Fred moved his family to Fremont, owning and managing all three stores. During the day, he was talking to customers. At night, he did paperwork in the office.

Despite all the responsibility, he loved retail.

Schweser even had a sign in office that said, “It can be done,” and told others that he took the word “can’t” out of the dictionary.

The company bought stores in Grand Island and Kearney in 1946.

Schweser encountered a problem when he learned that apartments above the Grand Island store were being used as a house of ill repute and the madam didn’t want to move. Schweser called the fire marshal to condemn the building, and the brothel was moved elsewhere.

In 1950, Schweser and his brother, Robert, built the Lincoln Plaza shopping center in downtown North Platte, which included the sixth Schweser’s store. In the 1960s, stores were added in Norfolk and Hastings.

Barbara Schweser Smith was in grade school when she began putting price tickets on items in the company’s warehouse. When she was older, she ran crank for the birdcage elevator that took customers from one floor to another. That was frightening, she said, because she had to judge the elevator’s load to make sure it lined up with the floor.

She also ran the plug-in switchboard — making certain she didn’t unplug a caller in mid-conversation.

From 1959-69, she worked in counseling, early childhood education and teaching for a college and a university in California. She married Dr. Hal Smith in 1969 and returned to Fremont.

Company growth in the 1970s was through the addition of junior stores called “Gladrags.” Then as department stores were becoming outdated in small towns, Schweser’s began changing, and by the 1980s locations focused on the clothing and accessory needs of women and children.

During that decade, Schweser’s opened a store in the Fremont Mall and maintained it until 2014.

Company history records state that in the 1990s, Gladrags stores were converted into Schweser’s stores. More new stores were opened in small towns. By the end of the decade, the company had 18 stores in five states.

Fred Schweser died in 1993. But even the day he died, he called the company office to ask about sales figures. His work would continue through his family.

Like their mom, Smith and Hocking ticketed merchandise in the warehouse.

Ty became company president in 2003. More stores opened and by 2005 — the company’s 125th anniversary — Schweser’s was preparing to open a 23rd store in Minnesota.

Ty Smith has appreciated having stores in Fremont and other locations.

“They’re small towns so you really get to know the community and be an important part of the women’s shopping experience,” he said. “We have always tried to offer value to our customers — bringing goods to small towns that other stores wouldn’t be able to do and at prices that the bigger stores weren’t able to match.”

He pointed out the store’s customer service.

“It’s an important part of who we are and who we’ve always been,” he said. “We’ve always greeted people as they’ve come in, helped them find sizes and coordinating outfits.”

“Many of the customers are known by name. Sales associates will phone customers if they know there’s something they’ve been waiting for,” Hocking added.

Part of the company’s strategy has been knowing what customers want and understanding that not every vendor from New York is trying to fit Midwestern customers. The Schweser’s stores have provided a full range of customer sizes.

The family has appreciated the company’s employees.

“We’ve got employees who’ve been with the company for 30 or 40 years,” Smith said.

Office manager Melody Loehr of Fremont has been with the company for 38 years. She began working for Schweser’s in May 1977, two weeks before she graduated from Fremont High School.

“I heard there was a position open and came, applied and was hired,” she said. “I started in the balcony office, waiting on customers.”

At that time, the people even came to the store to pay telephone bills, along with store accounts or to buy gift certificates. Loehr was on the switchboard, too.

Chris Nesson of rural Nickerson, director of merchandizing, has worked at Schweser’s for 35 years.

“I was looking for a job and I knew somebody who worked in the store — and she said there was an opening on the sales floor,” said Nesson, who’s done various jobs.

Both women have appreciated their time at Schweser’s.

“Every day is different,” Nesson said. “You have a plan, but something else might rise to the top and you do that, instead, because it takes priority.”

“It’s been a good job for me and it’s going to be hard to go out there and find something like it, because it probably doesn’t exist in this town,” she said. “I’m open to whatever comes along.”

Loehr also has appreciated her time at Schweser’s.

“I’ve been treated very well for the past 38 years,” Loehr said. “It’s been an honor to work for three generations of Schwesers.”

Former Dodge County Sheriffs Deputy Craig Harbaugh was found dead at his home in Fremont on Thursday, according to a press release from the Do…

At approximately 4 p.m., July 28, Lashay Aguilar, 21, of Fremont was arrested on an outstanding Dodge County arrest warrant in the 200 block o…

Various Fremont schools, organizations and governmental entities have announced new protocols in response to the COVID-19 pandemic and its Del…

At approximately 6:20 p.m., July 27, Veronica M. Derojo, 49, of Fremont was arrested on suspicion of driving with a suspended license followin…

The Fur Shack planning fundraiser event in aftermath of fire

Betsy Hocking, vice president in charge of purchasing, and Ty Smith, company president, stand inside the Schweser's store in Fremont. The company announced in September that it will close all 20 of its stores after the holidays. Schweser's was among area businesses that in 2015 closed or announced plans to close.

This is a photograph of the Schweser's store in downtown Fremont in the 1950s.

This is an earlier photograph of Fred Schweser, who owned and operated the Schweser's stores.

The Schweser's store has been part of Fremont's downtown section for decades. 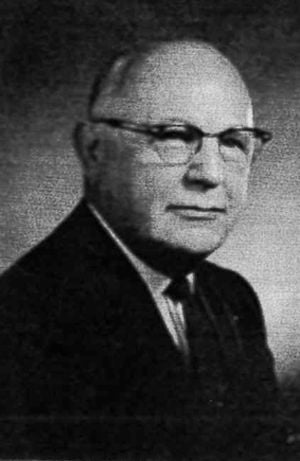