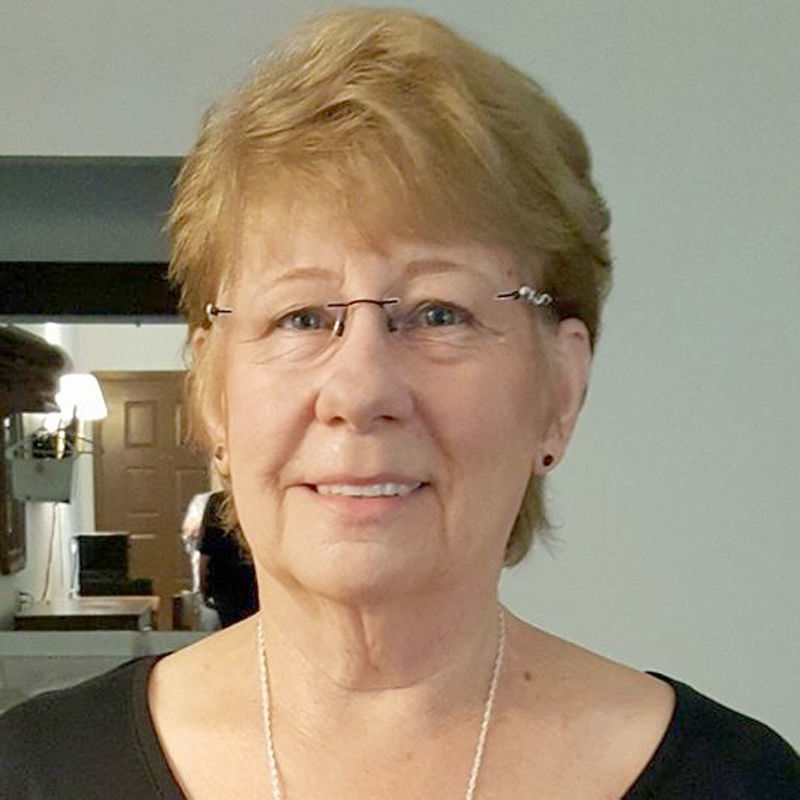 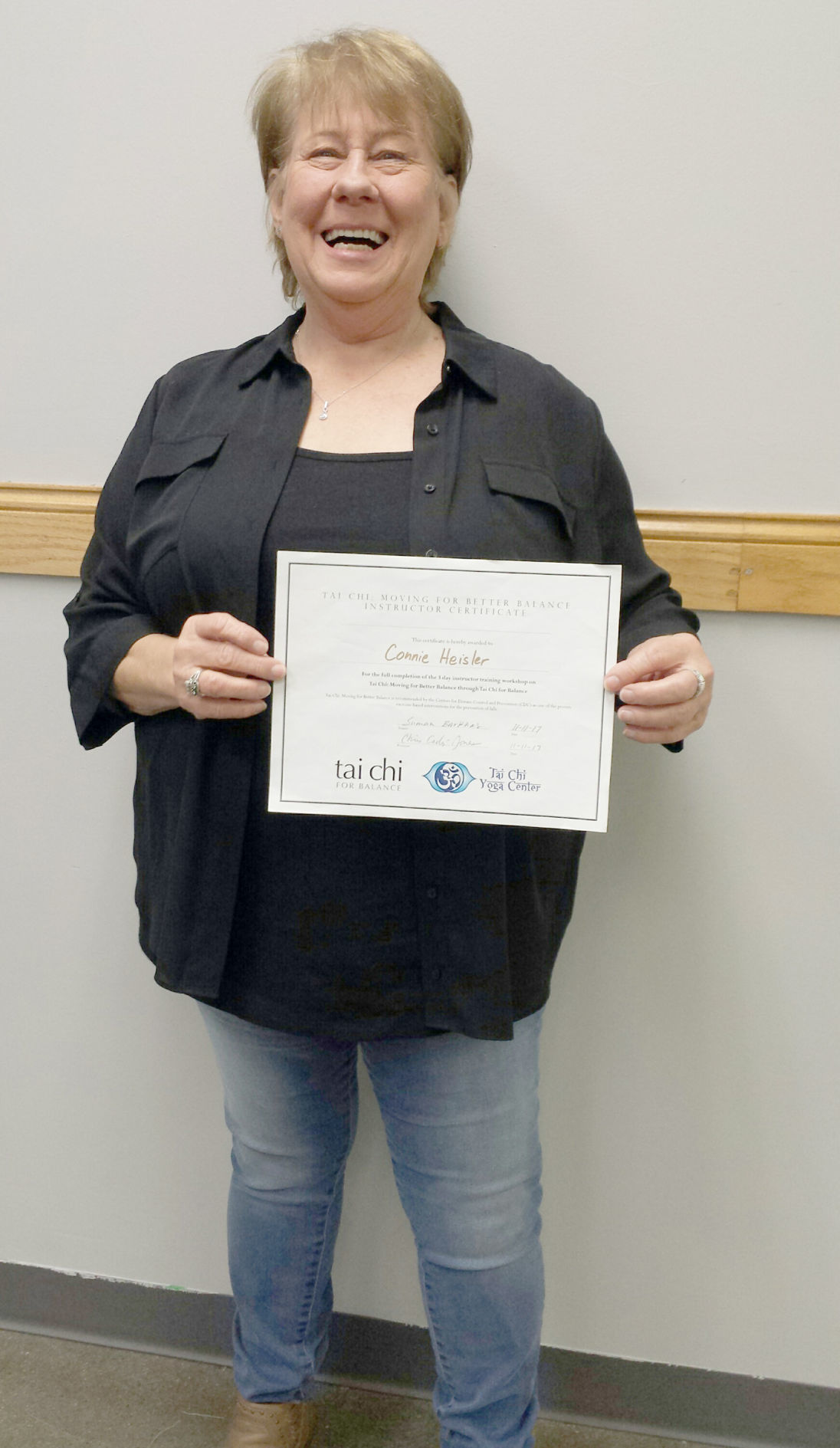 Connie Heisler of Fremont shows the certificate she earned to teach Tai Chi. She teaches at the Fremont Friendship Center and Nye Square. 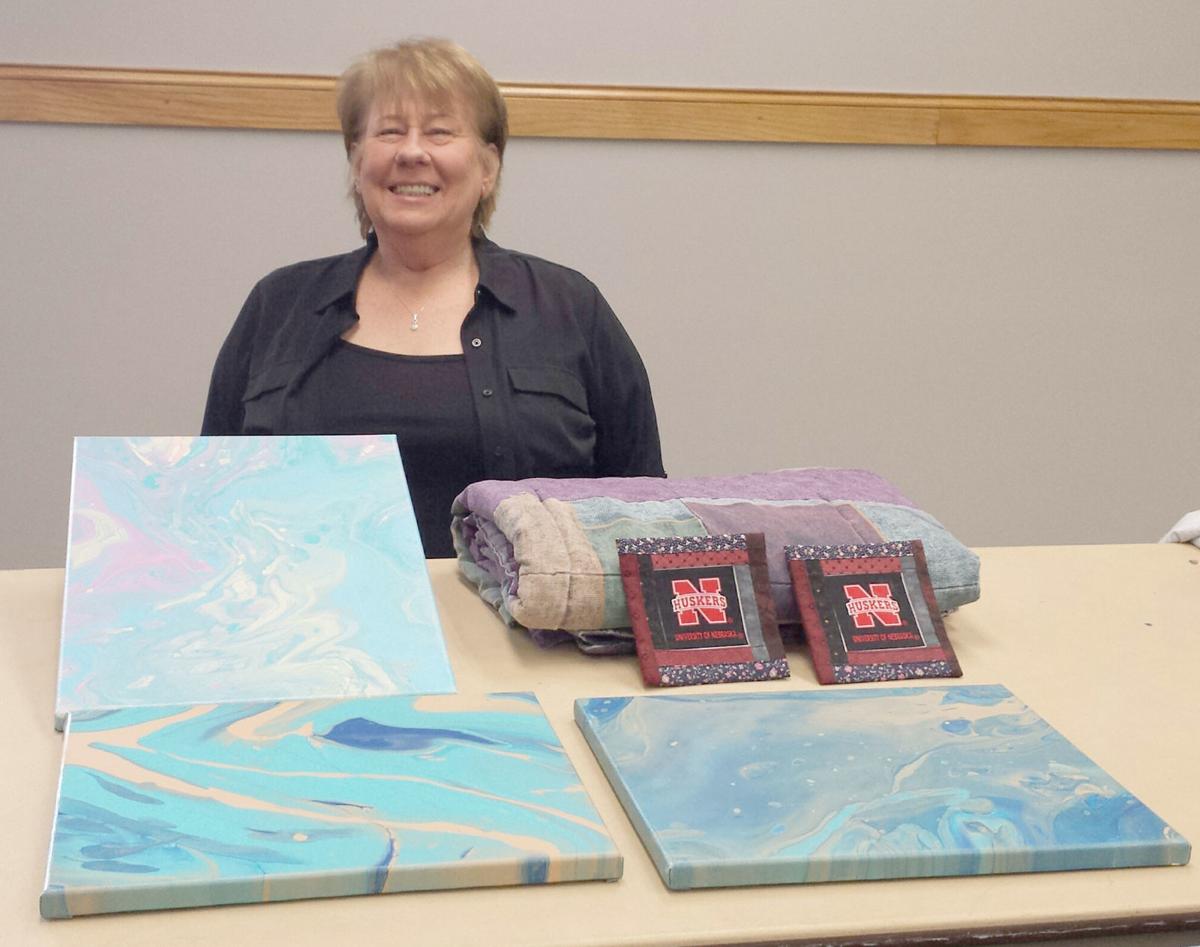 Fremonter Connie Heisler shows some of the paintings she's made. She's also involved in groups and various projects. 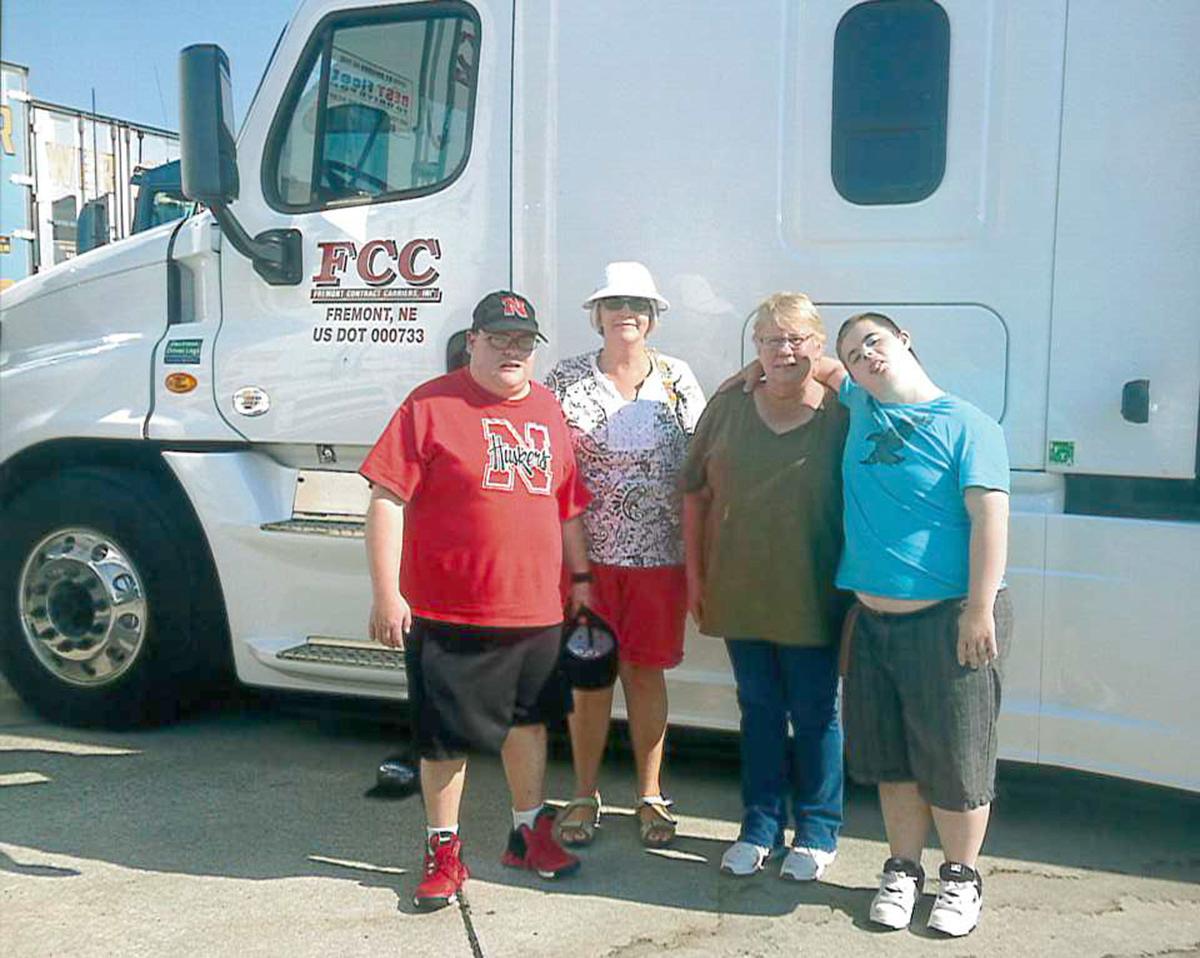 Connie Heisler, second from right, is shown with her great nephew Zachary Seamann, who got to ride with her on the “Truck Convoy for Special Olympics.” Heisler was a truck driver for 25 years. 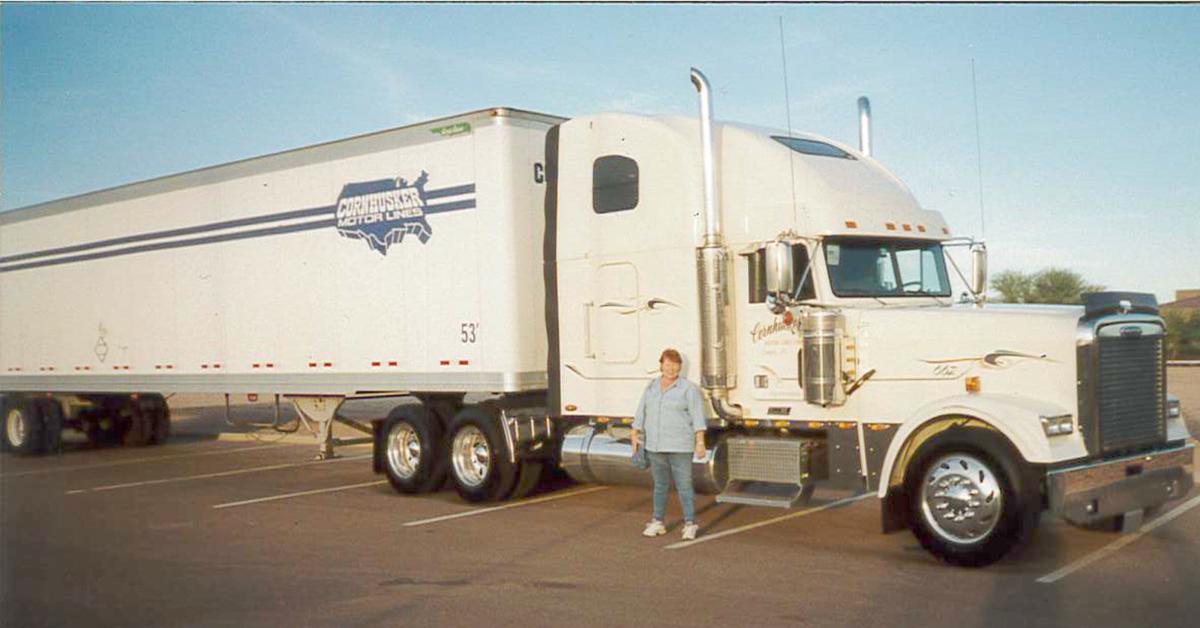 Fremonter Connie Heisler is shown with a semi-trailer truck she drove. She was a truck driver for 25 years before retiring. Today, she sings and is a Tai Chi instructor and great-grandmother. 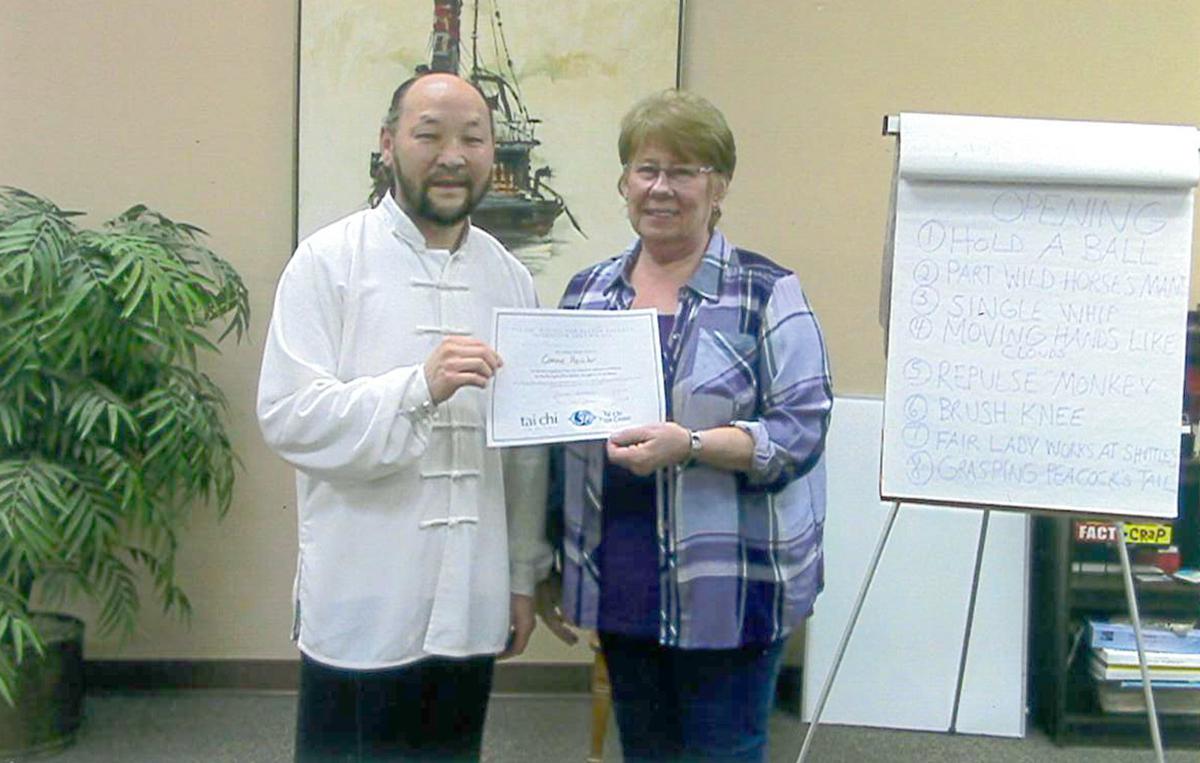 Suman Barkhas, left, holds a certificate with Connie Heisler of Fremont after she became certified to teach Tai Chi.

But the Fremont woman didn’t venture out of her comfort zone until about two years ago.

From truck driver to Tai Chi instructor, Heisler has embraced new experiences since retiring a few years ago. She’s a proponent of the Fremont Friendship Center.

And the woman who once liked to remain inconspicuously in the back row has learned to lead classes and groups.

Heisler grew up on a dairy farm near Boone. She was a freshman when her family moved off the farm and she graduated from Madison High School.

She’d marry and have two children, Rhonda and Christopher Westphalen, both born in Fremont. She lived here from 1965 to 1972.

Heisler was 41 years old when she went to truck driving school.

One of Heisler’s favorite things to do was to participate in the “Truck Convoy for Special Olympics.”

This is a national event during which members of the trucking industry work together to raise funds for Special Olympics.

“We always take a Special Olympian in the truck with us and I would take my great nephew, Zachary,” she said of the convoy that goes from Hastings to Grand Island.

“The first time I had him in the truck with me he was so excited and was jumping up and down.”

Zachary Seamann of Hastings would enjoy riding in the truck with his Aunt Connie more than once.

In 2013, Heisler moved back to Fremont and drove for Fremont Contract Carriers, Inc., before she retired in November 2014.

She’d face another turn in her life’s path when her mother, Darline Zipf, died in February 2015.

Zipf had been known in old-time country music as the “Yodeling Grandma” and won awards.

Now, Heisler and her sister, Peggy Seamann of Hastings, are carrying on their mom’s legacy.

“We have been singing at the National Old Time Music Festival in Fremont for the last two years,” Heisler said, adding that her sister is really the yodeler.

After her mom’s death, Heisler’s friend and relative, Paulette Steffensmeier, encouraged her to come to the Fremont Friendship Center and try Tai Chi.

Heisler, who’d been having shoulder pain, thought the class might help. She’d participated for two years when asked to become certified and become an instructor.

“I said, ‘no,’ at first,” Heisler said. “I’m always the person in the back row and so it was hard for me to think about being in front of everybody.”

But she took a course through the Eastern Nebraska Office on Aging and was certified in 2017.

She met Suman Barkhas, who’s originally from Mongolia and teaches on the instructional videos that ENOA uses.

The friendship center class she teaches is called “Tai Chi for Balance.”

Tai Chi involves slow, deliberate movements that can improve balance and protect against falls. Heisler said it also strengthens muscles, leads to relaxation and helps with endurance and flexibility.

Heisler also got involved in line dancing, too, and fills in as a teacher when instructor Lori Adams is gone.

Heisler’s also made pour paintings in which paint is poured on a canvas to make designs. She’s made a lap quilt and cloth coasters.

But she’s not had much time for that lately.

Heisler works part time at the desk at Planet Fitness in Fremont.

She’s president of the Eagles Auxiliary and helps serve hamburgers on Thursdays at the downtown club.

Heisler’s a Friendship Center board member and leads the Supportive Singles group in Fremont.

“I wanted to meet people after I retired and so I started going to Supportive Singles lunches,” she said.

When it seemed like the group was going to dissolve, she opted to become its leader two years ago.

The group has begun having singles dances at the Eagles Club. That started after a local man offered to serve as the disc jockey and play the music.

Heisler also said many people have told her that they don’t know how to meet others and say there’s nothing to do in Fremont.

The dances are open to singles and married people.

“This is a good way to get together,” she noted. “We’d like married couples to bring their single friends.”

Attendees are invited to listen to the music and/or dance.

The next dance is planned from 7:30-11 p.m. Nov. 23 at the Eagles Club. After that, dances will take place on the third Saturday of each month.

Looking back, Heisler is glad she’s become involved in different groups and activities.

“I have made so many friends,” she said. “I was always a loner. This has taken me beyond my comfort zone and I’m enjoying my retirement life.”

She adds that people need not be bored during retirement and encourages them to come to the friendship center.

“When I’ve talked to people about coming to the friendship center, they say they’re not old enough yet,” she said. “You’re eligible to come out here at 60. Out here you can play cards. We do Tai Chi and dancing. We have live music every Wednesday morning. There’s a lot to do here.”

And it can start with one step outside of a comfort zone.

Editor’s Note: Senior Showcase, sponsored in part by Nye Health Services, is a weekly feature that will appear in the Tribune each Wednesday through early-December at which time the Fremont Tribune will publish a keepsake publication full of the stories in the series.

Marsha Niday didn’t make it to church one Sunday morning.

Fremonters worked to save cats during flooding

Although evacuated themselves, retired firefighters Shiela and Todd Wall went on some unusual rescue missions during the spring flooding.

Jeff Miller knows that the ingredients of faith really can be as simple as sugar and cinnamon.

She didn’t wear a red suit, but Edie Ronhovde got to be Santa Claus on Tuesday.

Mary Loftis knows that Medicare-related information can be overwhelming.

Like the character she portrays, Maddison Underberg followed a guy to a new place.

Does a double-double duo mean double the entertainment?

Auxiliary hopes to resume dinner in 2020

The Fremont Eagles Auxiliary will not be hosting a free dinner this year for Veterans Day.

Fremont Mall will be hosting an American Red Cross blood drive from 9 a.m. to 3 p.m. Saturday.

Although young, Jonah and Montana Renter have lots of history at The Hope Center for Kids in Fremont.

Geraldine Clausen always wanted to be a lawyer.

Connie Heisler of Fremont shows the certificate she earned to teach Tai Chi. She teaches at the Fremont Friendship Center and Nye Square.

Fremonter Connie Heisler shows some of the paintings she's made. She's also involved in groups and various projects.

Connie Heisler, second from right, is shown with her great nephew Zachary Seamann, who got to ride with her on the “Truck Convoy for Special Olympics.” Heisler was a truck driver for 25 years.

Fremonter Connie Heisler is shown with a semi-trailer truck she drove. She was a truck driver for 25 years before retiring. Today, she sings and is a Tai Chi instructor and great-grandmother.

Suman Barkhas, left, holds a certificate with Connie Heisler of Fremont after she became certified to teach Tai Chi.