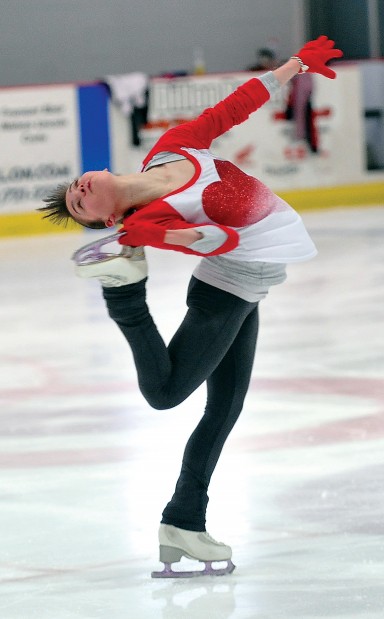 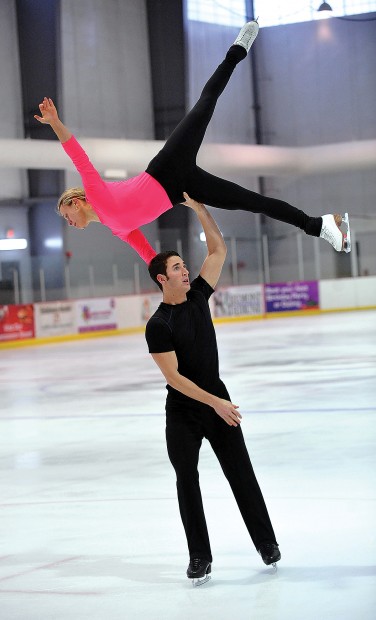 Craig Norris lifts Brenna Doherty during a practice session at Sidner Ice Arena Sunday morning, Jan. 20, 2013 in Fremont, Neb. Norris and Doherty are competing in the Junior Division of the U.S. Figure Skating Championships taking place at the Century Link Center in Omaha through next Sunday. (Tony Gray, Fremont Tribune) 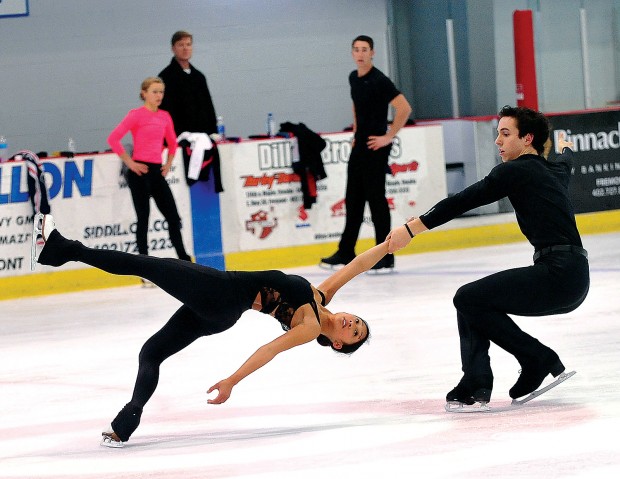 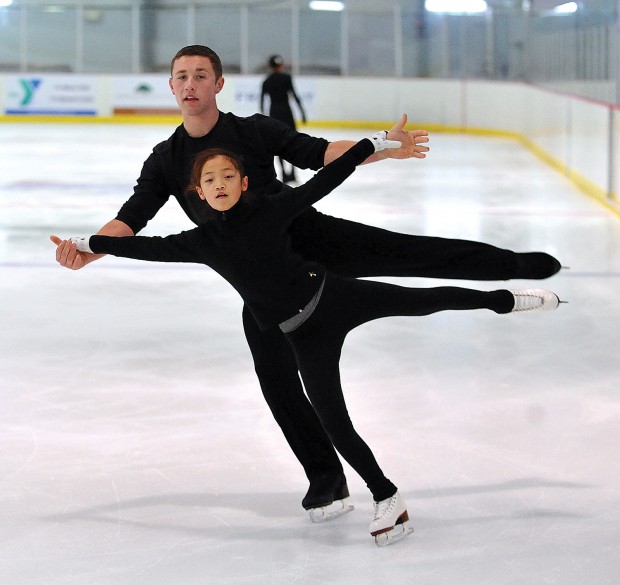 Fremont’s Sidner Ice Arena has turned into a popular practice destination for some of America’s top figure skaters.

With the U.S. Figure Skating Championships taking place at the Century Link Center in Omaha through next Sunday, some of the skaters are using the Fremont rink as a practice site.

Angie Wyle, director of ice operations, said Sidner has had youth figure skaters on the ice before, “but not of this caliber.”

“With the nationals competition,” Wyle said, “these people had to go through regionals, and basically had to be the top of the top in two different categories to get to Omaha.”

“The two that came out here Friday, the mom walked in and fell in love with the rink immediately,” Wyle said. “She said it was a beautiful facility. They skated on the ice and said the ice was perfect; it was great, they loved it. It’s been good for us to get that feedback.”

Coaches Jere Michael and Alex Chang, who together brought four national qualifiers from their club in southern California, said finding quality ice is crucial and can be challenging.

“It’s actually probably one of the most important things,” Michael said.

“At the National Championships they have set practice ice, but sometimes the kids want more practice ice,” he said. “When it’s not available or when it’s not nice or not organized, it adds an aspect of stress for the coaches to find it to make their kids comfortable.”

“We put the feelers out in November or October when we knew that it was coming up in January,” she said. “We posted on our website, ‘If you’re coming to Omaha and you’re interested in looking for some time, contact us at the rink.’ We had a couple people right off the bat that contacted us, but this last week we’ve had a ton of phone calls coming in.”

“The temperature of the ice determines consistency,” Chang explained, “and it’s perfect here. They did a really good job.”

As Californians Courtney Hicks and Amanda Gelb glided across the Sidner ice during a Sunday morning practice session, Gelb’s mother, Marlene Dunstan, said she prefers Sidner to some of the facilities available in Omaha.

“Even though there’s rinks close by, we’re coming an hour just to skate here. ... It’s better to find a place that’s going to have good ice, that’s warm, and not a lot of crowding,” Dunstan said. “Before we got here, we called tons of rinks. We reserved ice everywhere, and we came here and everyone loved it the first day we got here, so we’re making that drive every day just because the ice is so great.”

Gelb, 15, is the reigning Novice Ladies U.S. bronze medalist, she is competing in the junior level at Omaha. This is her second year at nationals.

“I’ve been skating since I was 2, and I kept wanting to skate when I was older. My older sister was in it too, but she didn’t continue,” she said.

The first thing she noticed about Sidner, she said, was its warmth. Rinks in California, she explained, are typically much colder.

“And the ice is a lot softer,” she continued. “In California it’s really hard, so it’s hard to skate. It’s really warm here and you can stay on the ice longer.”

Hicks, 17, the 2011 U.S. Junior Ladies national champion, is in her second year competing in seniors, but in her first year of national competition at that level.

“It’s a lot of fun to skate with a lot of the high level skaters and to be able to compete in a large arena with the larger crowds,” she said.

“I usually skate two to three hours a day, then I also have off-ice at the gym, and also my dance class,” she said.

Wyle said figure skaters will show up at Sidner off and on throughout the week, and the public is welcome to watch the practices. She expects some skaters Tuesday afternoon, plus skaters have scheduled practices for 10 a.m. to noon on Wednesday, 1-2 p.m. on Thursday, and Friday morning.

Sidner has a limited number of tickets available for the competition.

A Fremont man was flown by medical helicopter to Omaha after a Saturday night motorcycle accident.

At approximately noon, Oct. 20, Breanna M. Kelly, 21, of Omaha was arrested on suspicion of possession of a controlled substance (methamphetam…

At approximately 10:30 p.m., Oct. 21, James J. Scarpino, 30, of Fremont was arrested on suspicion of assault (domestic) after officers were ca…

At approximately 3:45 p.m., Oct. 21, Jon C. Coniglio, 49, of Fremont was arrested on suspicion of drinking on public property and littering af…

A Fremont man and Papillion woman both pleaded guilty to possession of methamphetamine in the Dodge County District Court Monday.

At approximately 3:15 p.m., Oct. 22, Kevin K. Wedergren, 54, of Fremont was arrested on suspicion of theft after a bicycle was reported stolen…

At approximately 7:10 p.m., Oct. 24, Yoseline V. Servin Castillo, 21, of Omaha was arrested on suspicion of driving while under the influence …

Standing in the terminal of Eppley Airfield with other members of the Fremont community, Vicki Wehrmann-Sorensen waited anxiously for the plan…

Craig Norris lifts Brenna Doherty during a practice session at Sidner Ice Arena Sunday morning, Jan. 20, 2013 in Fremont, Neb. Norris and Doherty are competing in the Junior Division of the U.S. Figure Skating Championships taking place at the Century Link Center in Omaha through next Sunday. (Tony Gray, Fremont Tribune)