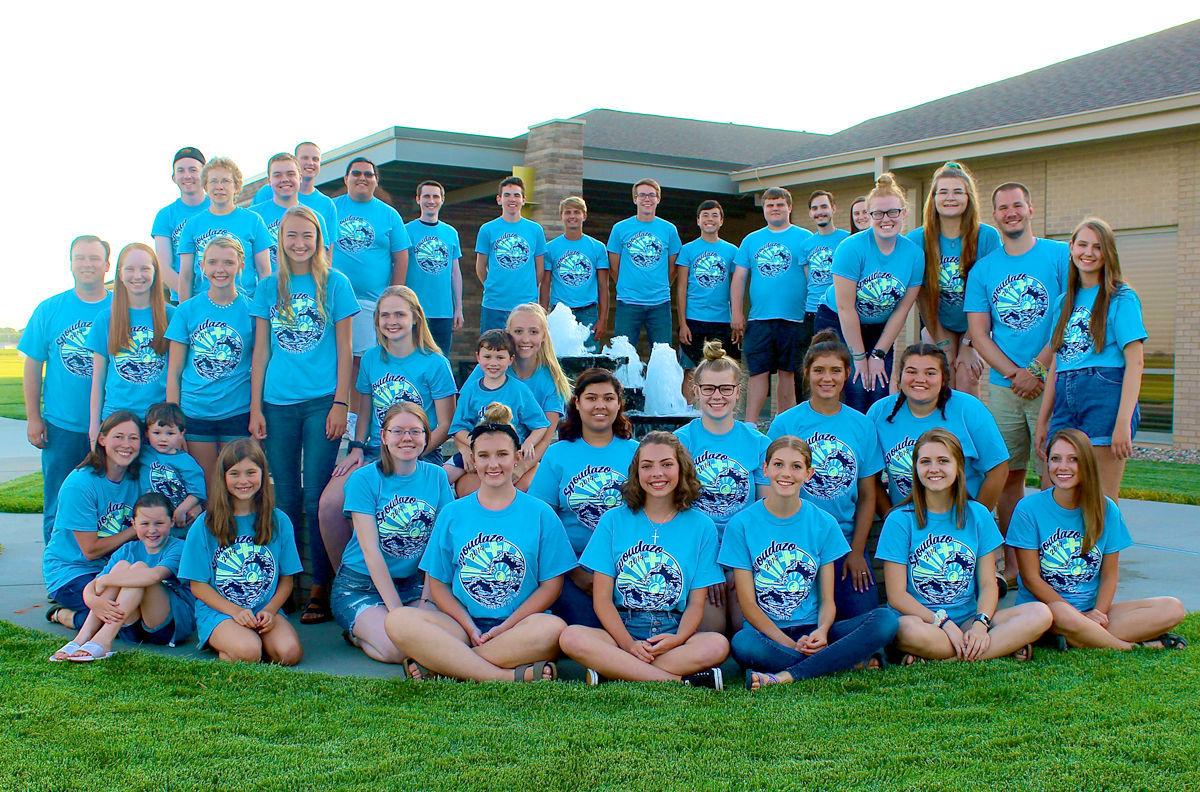 Local traveling musical group Spoudazo began its tour in Sioux Falls on Tuesday. The group will also perform at churches in Iowa and Minnesota before returning for their final show at First Lutheran Church at 7 p.m. on Sunday. 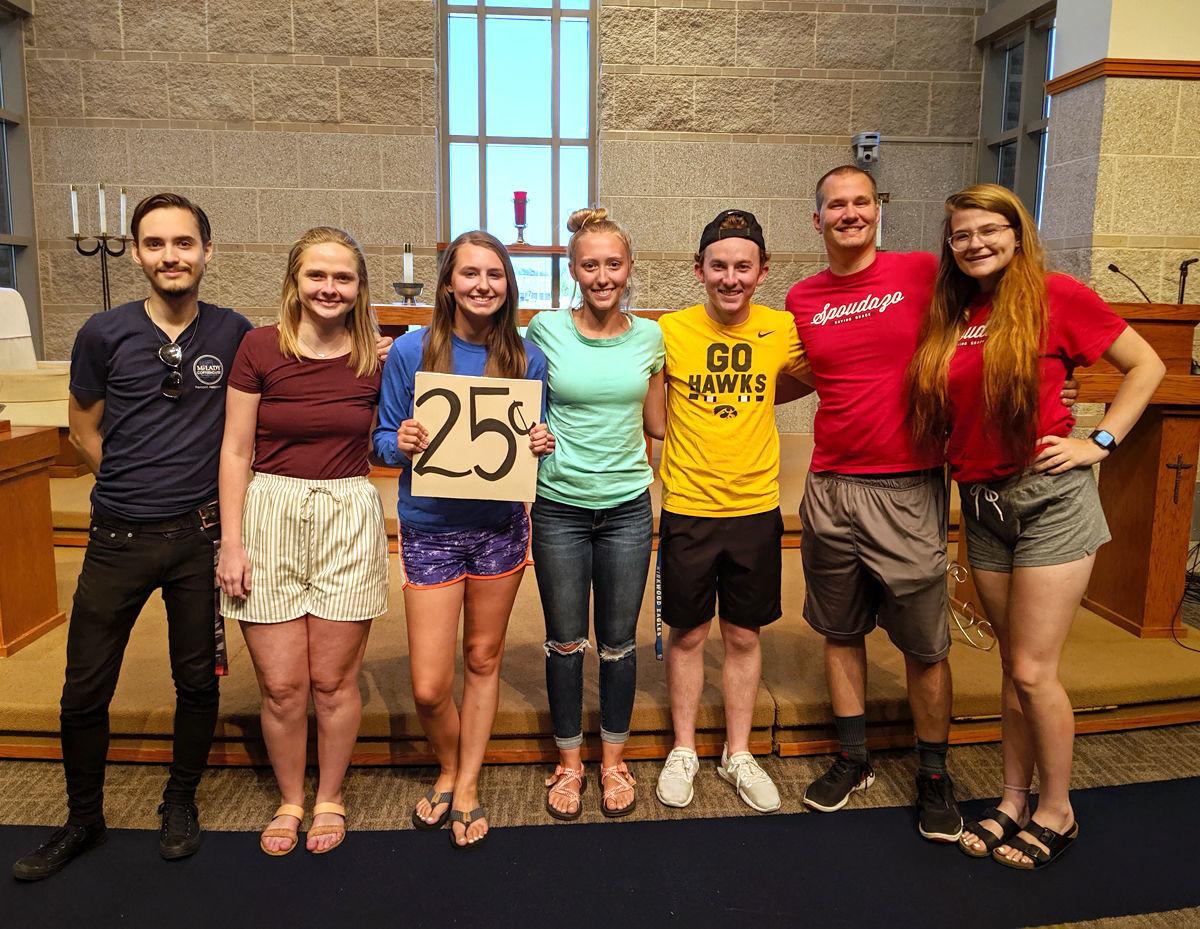 Members of Spoudazo hold up a one foot square section of drywall that represents the amount for drywall 25 cents will purchase for local flood victims. Half of offerings collected by the group during it's your will go to the Fremont Area United Way to purchase drywall to be used for repairs to local flood victims homes.

Local traveling musical group Spoudazo began its tour in Sioux Falls on Tuesday. The group will also perform at churches in Iowa and Minnesota before returning for their final show at First Lutheran Church at 7 p.m. on Sunday.

Members of Spoudazo hold up a one foot square section of drywall that represents the amount for drywall 25 cents will purchase for local flood victims. Half of offerings collected by the group during it's your will go to the Fremont Area United Way to purchase drywall to be used for repairs to local flood victims homes.

When the theme for this year’s Spoudazo group tour was selected back in November, organizers and members of the traveling musical group had no idea just how relevant it would be when the time to hit the road came earlier this week.

Each year the ecumenical youth group sponsored by First Lutheran Church in Fremont—which this year features 21 area high schoolers and young adults from multiple churches from the Fremont area—heads out on tour to perform an original production using contemporary Christian songs and skits based off a specific theme.

This year’s theme—chosen back in November—just happened to be “Water.”

Now, as the group heads out to perform in Iowa, Minnesota and South Dakota before returning for its finale at Fremont First Lutheran Church at 7 p.m. on Sunday, their mission of spreading God’s grace will also extend to local flood victims as the community continues to rebuild.

Each year the traveling ministry donates half of its offering received during the tour to a charity—usually Kids Against Hunger—but this year that money will go to the Fremont Area United Way for the purchase of drywall that will be made available to flood victims throughout the area.

The group will also be bringing their own one square-foot section of drywall as a prop to use as a visual aid to represent the amount of drywall an offering of only 25 cents will purchase at $8 per sheet.

The other half of offerings received during the tour are used to support the Spoudazo group to make it affordable to participating students, says Spoudazo co-coordinator Dawn Koehlmoos.

The group began its tour on Tuesday as members traveled to Gloria Dei Lutheran Church in Sioux Falls to perform before continuing their tour at Lord of Life Lutheran also in Sioux Falls.

From there the group will travel to Ramsey and Bloomington, Minnesota and continuing on to Spirit Lake and Milford, Iowa for two more performances.

The tour will finish up on Sunday back in Fremont at First Lutheran Church, 3200 E. Military Avenue, in Fremont at 7 p.m. with an ice cream social beforehand at 6 p.m.

For students involved in the group, the tour serves as the culmination of each year’s group which meets from May to the July each year.

While the group’s numbers have dwindled in recent years, current members say being part of the group provides a chance to make lasting connections with fellow teens.

“They are missing out if they don’t know what this is about and I would encourage anybody in high school to give it a shot because it changed my life,” longtime group member Kaleb Jorgensen said.

Jorgensen joined the group as a student back in 2012 and after graduating from high school, and phasing out of the group as a college mentor, still keeps coming back year after year.

“I’ve aged out of the college mentor role and they still can’t really get rid of me,” he joked. “I’m just going to keep showing up, because even though I’ve technically phased out I can’t leave—this group has become like my family.”

For current college mentor Kialynne Jorgensen, who has been a member for six years, the opportunity to transition from group leader to mentor has proved to be a worthwhile experience.

“We lead devotions and are just there for the younger people in the group if they need guidance or just need to talk,” she said. “For me, it’s been an eye-opening experience because my journey with God might be different from theirs—so it’s awesome to see where we can meet in the middle.”

Koehlmoos says that as an ecumenical high school group, which includes members from a variety of local churches and denominations, provides an opportunity for youth to come together to focus on their commonalities instead of differences.

“It’s to celebrate what unites us and we don’t get into nitpicking about how our beliefs might be different,” she said.

Spoudazo is in its 27th year of existence and any area high school students are invited to participate in the annual summer program.

Which season suits you best?