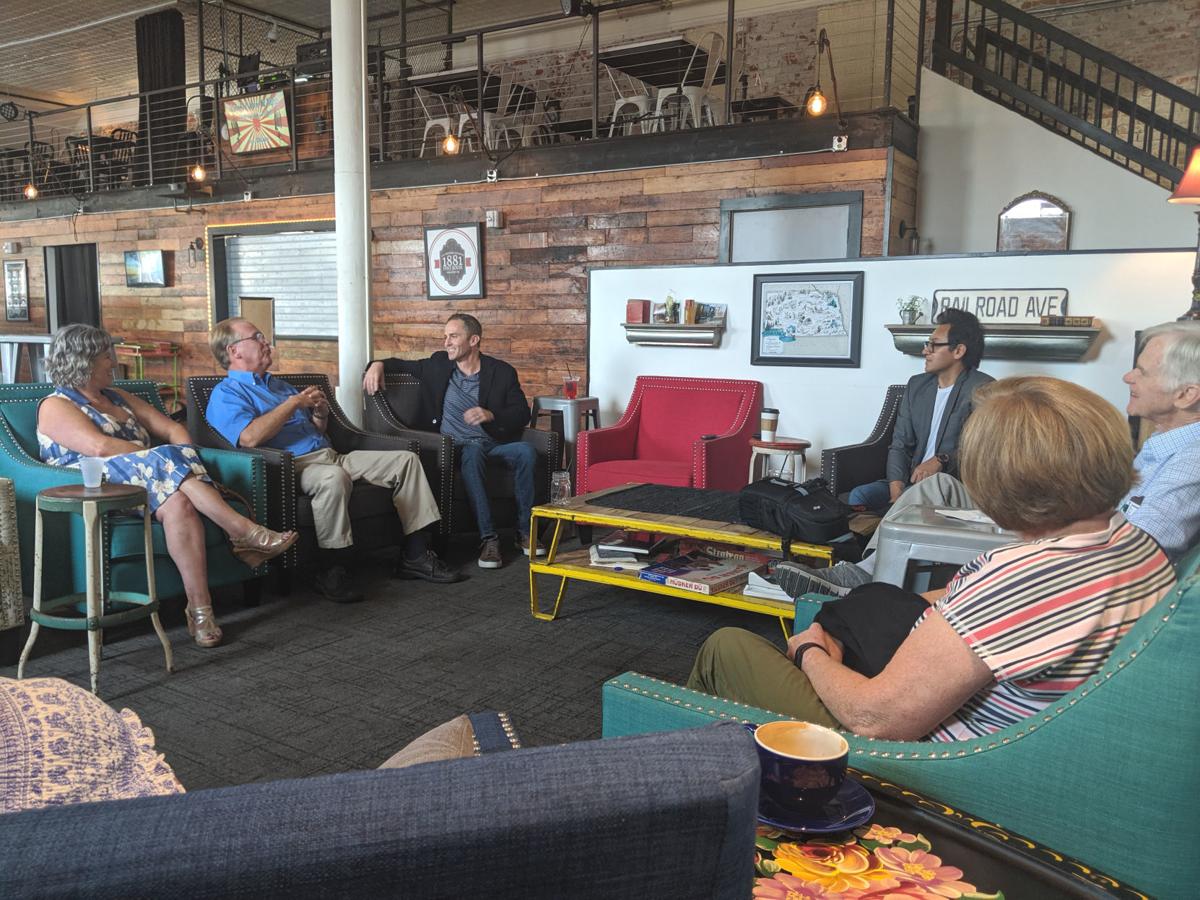 Stacy Heatherly, left, Warren Anzalone, center, and Andrew Troy, right, talk about their upcoming film, "I Am a Man." The movie, which is set to film in Nebraska, details the journey of Ponca Chief Standing Bear. 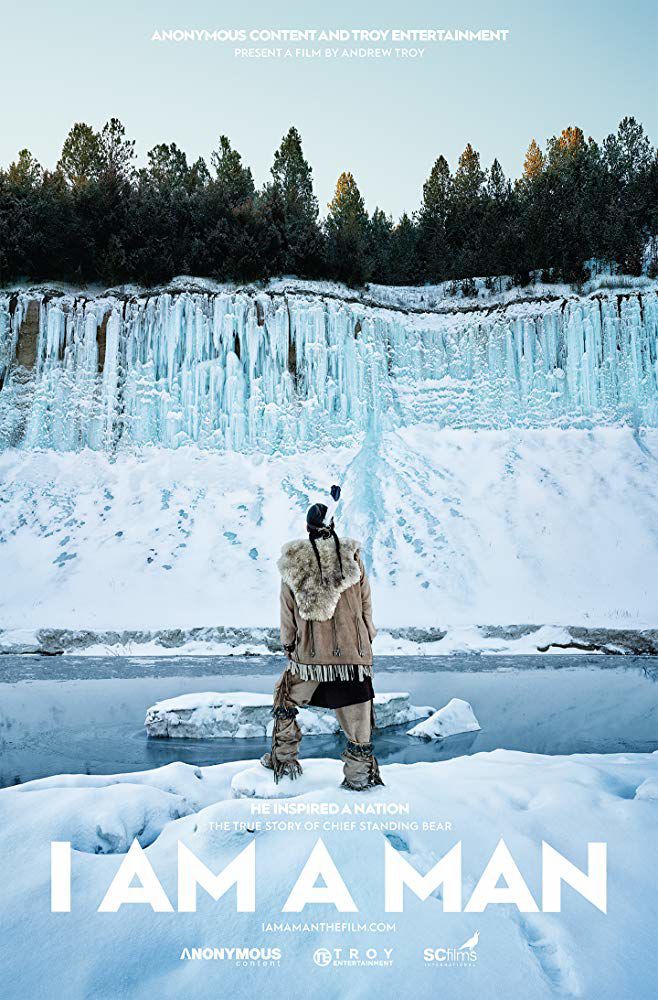 A poster for the upcoming film, "I Am a Man," which is set to film in Nebraska. The photo was taken by the Niobrara River, where Ponca Chief Standing Bear took his son to be buried.

It was eight years ago that Warren Anzalone first read Joe Starita’s book “I Am a Man,” which details the life of Chief Standing Bear of the Ponca Tribe.

“After I read that book, it just kind of dawned on me like a light bulb that this needed to be put out there on the silver screen to tell the story of his civil rights movement,” he said.

Anzalone, a movie producer, had worked on shooting music videos, short films and teen comedies, but said he wanted to do something with more meaning and was close to United States history.

After meeting and forming a deal with Starita, a journalism professor at the University of Nebraska-Lincoln, Anzalone secured the rights to adapt the work into a $20 million, feature narrative film to be shot in Nebraska, which he would executive produce.

“We have come quite a long way putting our package together and signing our production company, our distribution company and working to bring this to light right now,” he said.

Anzalone, Hollywood producer Andrew Troy and Stacy Heatherly of Fremont held a meeting and Q&A session about the film at the Milady Coffeehouse Monday afternoon.

Anzalone, Troy and Heatherly also have plans to construct an equestrian sound stage studio in Fremont with the help of stunt directors Tad Griffith and Eddie Perez.

“I Am a Man” details the journey of Standing Bear, who after being forced with his tribe to Oklahoma, returned to Nebraska to fulfill the dying wish of his son, Bear Shield, by burying him by the Niobrara River.

Although the book starts at 1801 with plans of the Louisiana Purchase and ends with Standing Bear’s death in 1908, the movie will cover the years 1876 to 1879, beginning with the Trail of Tears.

Troy, the director and producer of the film, was one of multiple writers for the adaptation from his company, Troy Entertainment. The writing process for “I Am a Man” took five years of multiple drafts before they felt comfortable with what they had, he said.

Originally starting in the music industry, Troy moved to the film industry after working with director Wim Wenders, who filmed a performance of Beck at his recording studio for his documentary “The Soul of a Man” in 2003. He owns several major film production studios and has worked on more than 80 feature films.

Troy said he tried to get an agent for the film from Anonymous Content, which has produced films like “The Revenant,” “Spotlight” and “Eternal Sunshine of the Spotless Mind.”

“Instead of getting an agent, I got a call from the owner and founder of the company who said he had read the script and thought it was one of the most outstanding screenplays he’s ever read,” he said. “And he not only wants Anonymous to produce it, but he wants to be a producer of the film.”

When taking trips to Nebraska during the writing of the film, Troy said he noticed that most people in the area were familiar with Standing Bear’s story. Troy, who is part Native American, said his father used to teach Najavos and his uncle wrote books about Native Americans.

“Neither of them had ever heard of the story, and certainly in school, this is not a story that I’d ever heard of,” he said. “So when Warren brought the book to me, I was quite surprised at the impact of Chief Standing Bear’s words and the fact that the majority of people in the United States don’t even know about this story.”

One of these trips to Nebraska had Troy meeting with the Ponca Tribe of Nebraska, who unanimously approved the movie’s production. He also spoke to the Nebraska Legislature about the film’s production and will travel to Washington D.C. this week for the unveiling of a statue of Standing Bear at the U.S. Capitol.

Troy said “I Am a Man” is a unique film for casting, as Standing Bear’s journey organically introduces him to historical figures, including Judge Elmer Scipio Dundy, Andrew Jackson Poppleton and George Crook.

Troy and Anzalone also revealed a new promotional photo for the film’s poster at the meeting.

“What this photo represents is the moment that Chief Standing Bear sees his homeland for the first time to bury his son,” Troy said. “When I see this photo, it makes me very emotional because it’s such a meaningful period in the story of Standing Bear’s life.”

The photo, shot by Nebraska photographer Jim Krantz, was taken on location by the chalk bluffs next to the Niobrara River.

“I don’t think anybody knows exactly where he’s buried, so we took some liberties in terms of the location,” he said. “But this is exactly where it could have been.”

Anzalone said the photo shoot was almost cancelled due to blizzards, but the team was able to get a shot with ice flowing down the chalk bluffs due to the warm temperatures before the blizzard had started.

“This picture was very special to us because the next day, it didn’t look like that,” he said. “So we just had this very small window to capture this and we actually had to trek in about four miles to get to that spot. It was very special and powerful for our project.”

Troy said although there is no set date for filming, they hope to start production around February or March. After a run of the movie in theaters, Anzalone and Troy said there are potential plans for a miniseries.

“There is an outline and actually scripts to continue this project, but the movie’s going to be the first priority for us,” Anzalone said.

As for the equestrian sound stage, Troy said he had talked about it with Heatherly, but hadn’t given it much thought. But after talking with Griffith, he said he was shocked to hear that the stunt director was working mostly outside the country.

“Of all things in the film business, for the United States of America, the land of the great westerns, to not be doing horse stunts just made me furious,” Troy said.

Troy said that often, horses are discarded after a movie production. But he said this won’t be the case with Griffith, who he called the top horse stunt director in the country.

Troy said he hopes the city will support the film’s production and the studio, which plans to train horses and shuttle them for use outside the state as well.

“Nebraska could be known as the state that saves the western horseback stunts in the United States, and I would like to see that happen,” he said.

The studio will also help retain talent within Nebraska, Heatherly said, which is something the state has struggled to do.

“People in the film industry, they need an indoor space to film, so having this facility is huge,” she said. “It has to happen.”

Film on Standing Bear to hold production in Fremont

Kris Kobach was in the middle of running for Kansas governor in December 2017, but he had unfinished business in Nebraska.

Man to share music and message for grieving people

The risk of illnesses known to be carried by the Aedes aegypti mosquito is low in Nebraska.

The Federal Communications Commission will hold a consumer education forum on phone fraud this Wednesday at 9:30 a.m. at Keene Memorial Library.

Singles group to gather for dinner

Are you tired of eating alone?

Stacy Heatherly, left, Warren Anzalone, center, and Andrew Troy, right, talk about their upcoming film, "I Am a Man." The movie, which is set to film in Nebraska, details the journey of Ponca Chief Standing Bear.

A poster for the upcoming film, "I Am a Man," which is set to film in Nebraska. The photo was taken by the Niobrara River, where Ponca Chief Standing Bear took his son to be buried.