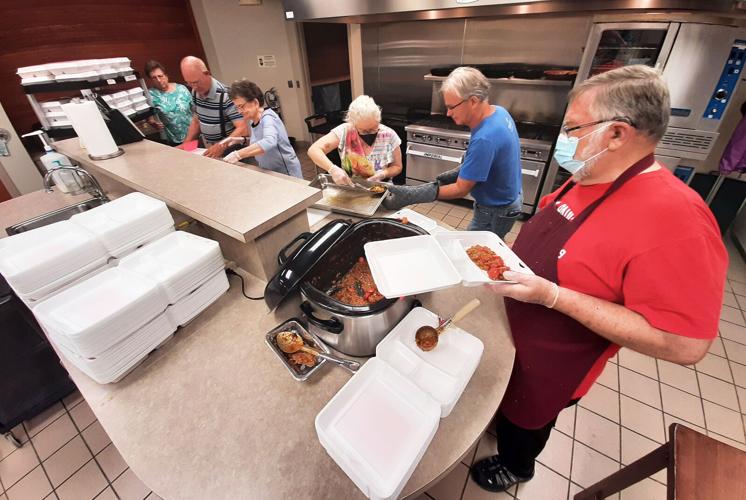 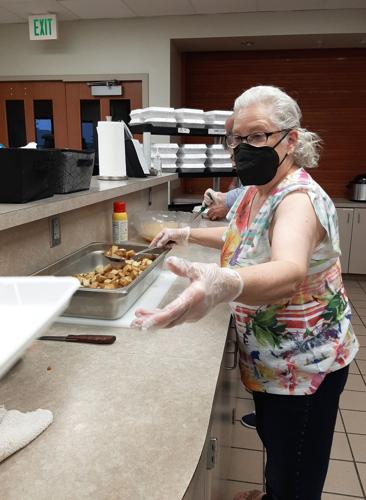 Carol Bosshardt prepares to dish up some potatoes one recent evening at First Lutheran Church in Fremont. 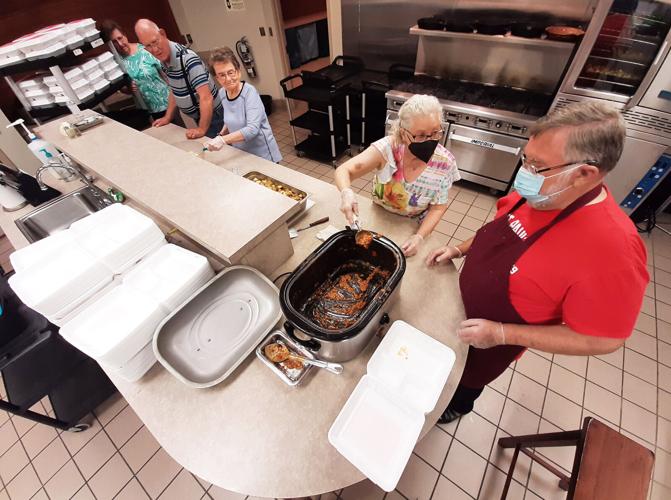 Volunteers at First Lutheran Church dish up a meal earlier this month when The Banquet still offered drive-thru meals. From right to left are: Tom Bosshardt, Carol Bosshardt, Joyce Seyl, Bill Miller and Jan Wolfe. The Banquet has returned to in-person meals.

The Bible talks about the Marriage Supper of the Lamb in heaven.

That has yet to take place.

But Chris Leaver remembers when a weekday dinner at First Lutheran Church became a wedding reception.

It happened years ago at The Banquet, a free weekly meal open to the public. The meal, which takes place on Thursday evenings, is designed for folks who could use a little help stretching their food budget, along with others who’d just like some extra socialization.

This year is the 10th anniversary for The Banquet, which since its inception in June 2012 has served more than 71,000 meals.

Leaver, program coordinator, said the event began with a group of people brainstorming about what to do with a mission fund at the Fremont church. Three group members had an idea of providing a community feeding program. They visited other large churches involved in this type of ministry.

“We kind of copied some of that,” Leaver said.

When the program began, approximately 125 people came to the church each week to share a meal in the church at 3200 E. Military Ave.

That number grew to about 250 meals each week when the church implemented a drive-thru service due to the COVID-19 pandemic.

This week, the church resumed its in-person dining with a meal of ham, au gratin potatoes, corn, fruit, a roll and butter and dessert.

People can make a monetary donation if they’d like, but nothing is expected.

Meals are made at the church. Desserts are donated. A variety of meals have been served, said volunteer Teresa Fauss.

Besides the main dish, meals include a potato, another vegetable and fruit. With the in-person dining, they’ll also include a dessert and milk or coffee.

Fauss said The Banquet has received donations of pork from Wholestone Farms and chicken from Costco Lincoln Premium Poultry in Fremont.

“That really helps out on the cost of putting the meal out,” she said.

Leaver said funds for the meals come from memorial gifts, grants and donations. Some guests donate, too.

Fauss said last week that volunteers weren’t certain how returning to in-person dining would affect numbers of attendees, adding that there won’t be carry-out meals.

Leaver believes inflation will have an effect on attendance.

“The need’s greater now than before COVID,” he said, adding, “We’ve sure noticed the cost of our groceries going up for this church program. I’m sure the folks we’re trying to reach are seeing the same impact.”

People of all ages come to the meal. Fauss has seen kids from a year old to folks who are well into their 80s.

She recalls a woman who asked for a little extra helping, because that was the only meal she’d had that day.

Another time, a man got up and began cleaning off tables.

When volunteers told him he didn’t need to do that, he said, “No, this is the only thing I can do for you for all you do for me.”

Another man, who lives quite a distance, has ridden his bicycle to get meals for himself and this mother. He regularly attended in-person meals before the pandemic.

Leaver said The Banquet can provide one hot, nutritional, homemade meal to help take a little pressure off a family’s budget. It also provides social interaction for other attendees.

“We have church members who come,” Fauss said. “They’ll sit and visit and have their supper. If someone’s lost their spouse, they sit home by themselves eating. This way, they have someplace to go.”

Work to prepare the food begins earlier in the day. Fauss said Leaver prepares the menu.

And if roast is to be served, Leaver comes early in the morning to put the meat in a roaster to cook.

“It cooks all day,” Fauss said.

Fauss and her husband, Randy, Bonnie Warner and Julie Fechner arrive between 1:30 and 2 p.m., and they prepare the rest of the meal.

They cooked 80 pounds of potatoes, 32 pounds of hot dogs and 12 cans of baked beans.

“Usually we go through eight or nine big gallon cans of vegetables and fruit,” she said.

When the church had drive-thru meals, only about five or six volunteers dished up meals and four cooked. Two other volunteers handed out the meals in front of the church.

More volunteers are needed now that The Banquet has resumed in-person dining.

“We have people that will pour drinks, carry out drinks for the ones (diners) who aren’t very mobile,” Fauss said.

Other volunteers are needed to donate desserts, wash dishes, and set up tables, complete with placemats and table settings.

Fauss added that those who come to the meal eat with real silverware, cups and glasses—instead of disposable ones—so the settings are nice for guests.

Leaver and Fauss look toward the future.

“It’s been going really well for the 10 years,” Fauss said.

Leaver also has a great Banquet memory of one couple, who were regular attenders. One Thursday, they got married at the county courthouse and then came to The Banquet that night to celebrate their wedding.

“We had a violin player, a piano player and we got some non-alcoholic champagne for all the guests,” Leaver said. “That was kind of cool.”

Fremont City Council members passed an ordinance to provide restrictions for on-street parking and for parking lots in the downtown area.

A transportation consulting firm has been looking at ideas that could make Military Avenue safer for motorists, bicyclists and walkers and als…

Community Action Partnership of Lancaster and Saunders counties has announced that Deanna Briley has been named chief financial officer. Brile…

We Care for Kids campaign launches in Nebraska

A statewide partnership of public and private organizations recently announced the launch of We Care for Kids, a public outreach campaign to b…

Fremont Public Schools is moving ahead with various projects, all are part of the voter-approved $123 million, no tax levy increase, bond issue.

Fremont-area calendar of events for June 18-20

A project involving work on portions of a runway at Fremont Municipal Airport is being pushed back a year.

Dylan Laufer and Molly Knosp are tackling dual roles in a comedy.

Entertainment calendar: Old Settlers Days, concerts and a circus are all happening this weekend

This weekend's area entertainment options are numerous. We've compiled a calendar of these events all in one place.

Watch Now: Disney caught in the middle of political firestorm over Florida law

Watch Now: Disney caught in the middle of political firestorm over Florida law

Carol Bosshardt prepares to dish up some potatoes one recent evening at First Lutheran Church in Fremont.

Volunteers at First Lutheran Church dish up a meal earlier this month when The Banquet still offered drive-thru meals. From right to left are: Tom Bosshardt, Carol Bosshardt, Joyce Seyl, Bill Miller and Jan Wolfe. The Banquet has returned to in-person meals.