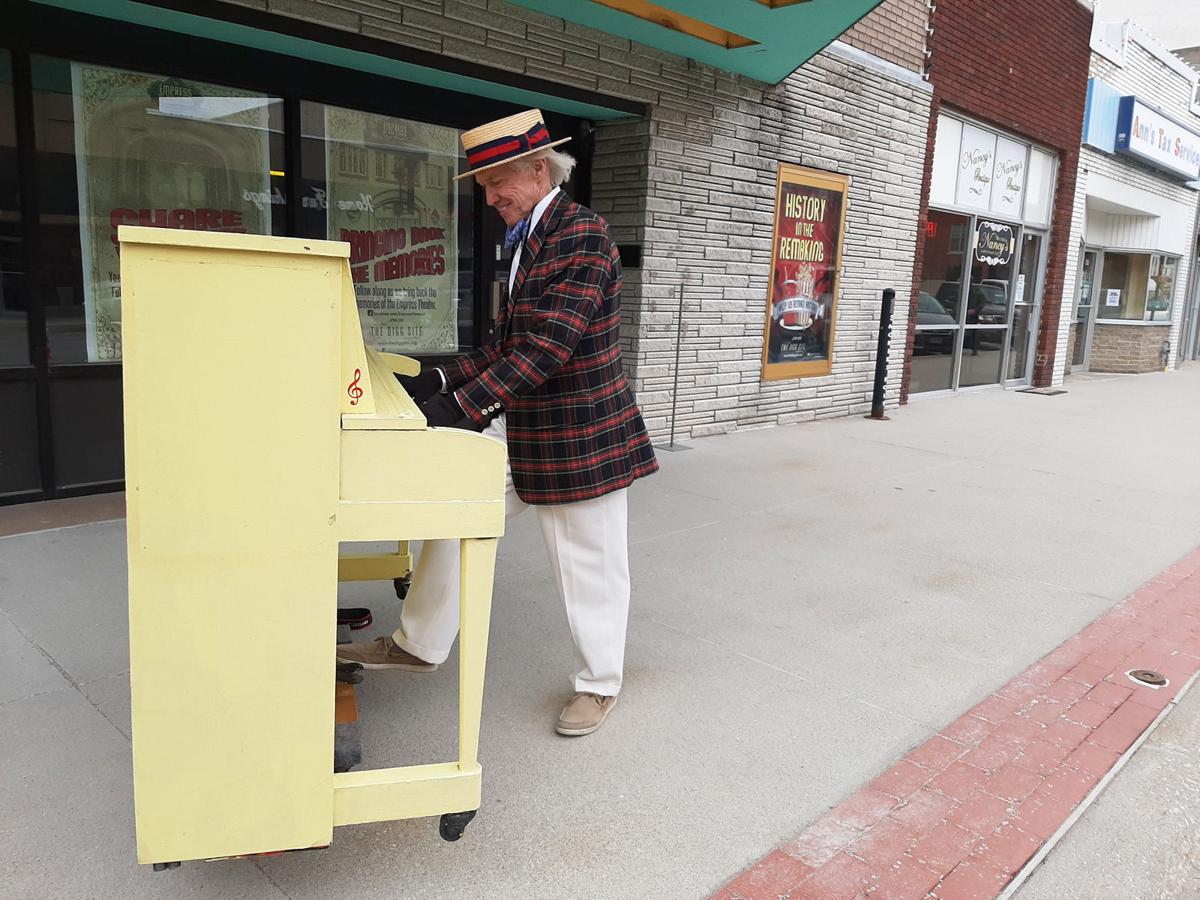 Fremonter Richard Roeder of Rader Photography plays the piano in front of the Empress Theater downtown. The Digg Site Productions is planning a $2.4 million restoration/renovation of the Main Street building, which will be used for a plethora of purposes. 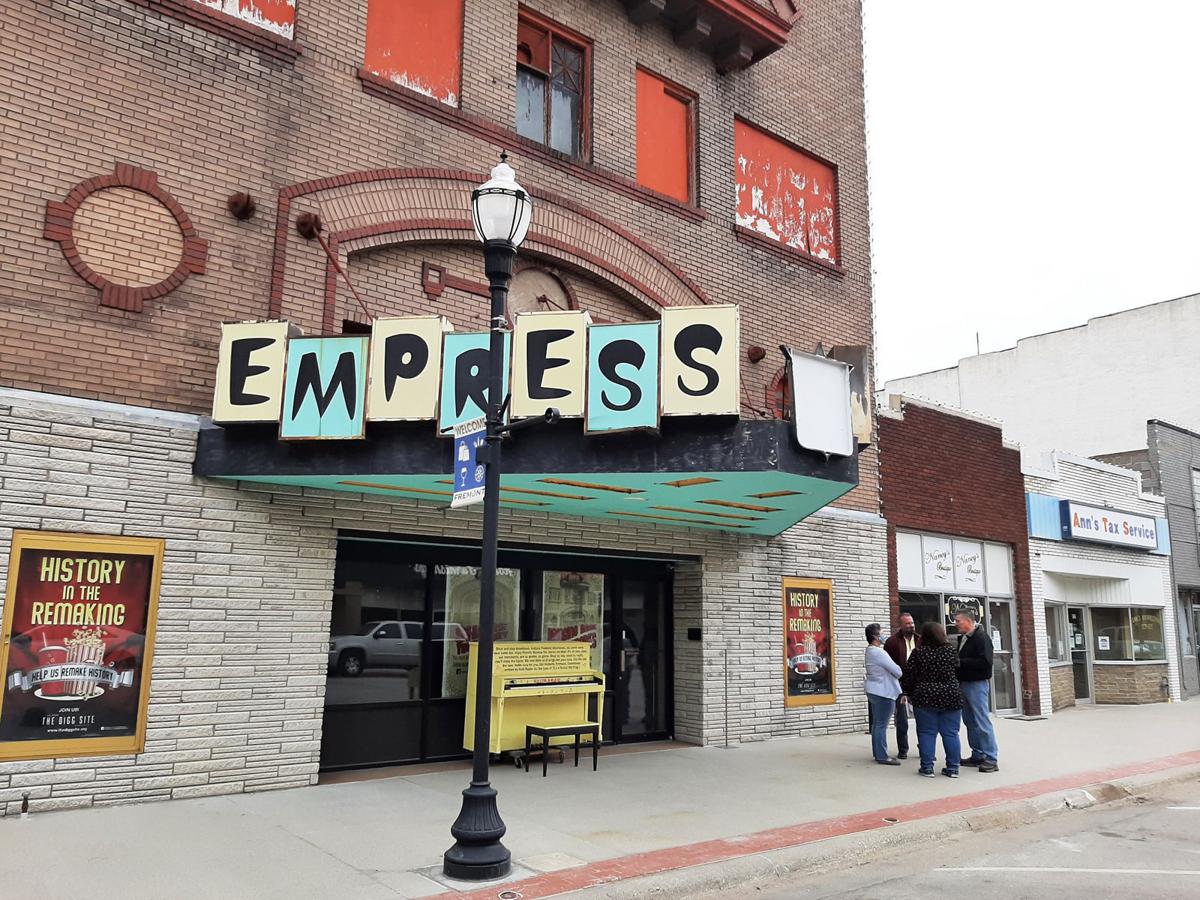 People stand outside of the Empress Theater on Main Street in downtown Fremont. 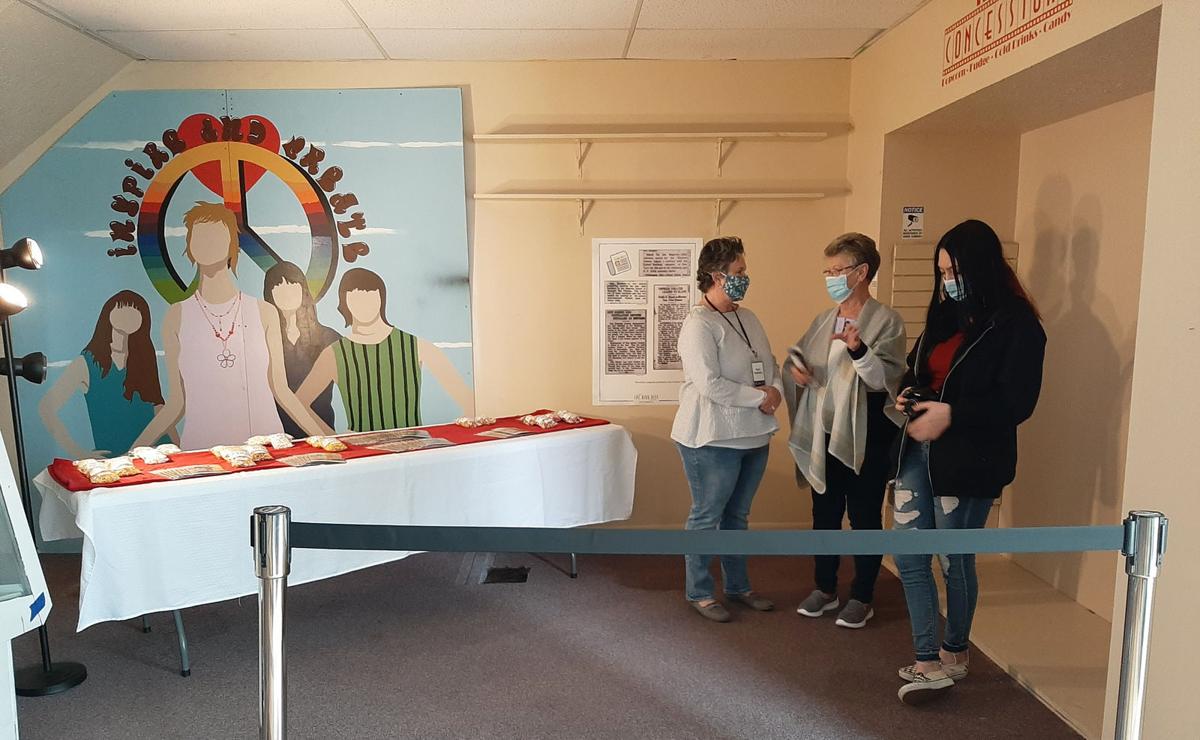 Stacy Heatherly, left, founder and advisory board member of the Digg Site Productions in Fremont, stands inside the Empress Theater during a private sneak peek in March. Nearby are Sally Fischer of Fremont and Andrea Miller of Omaha. 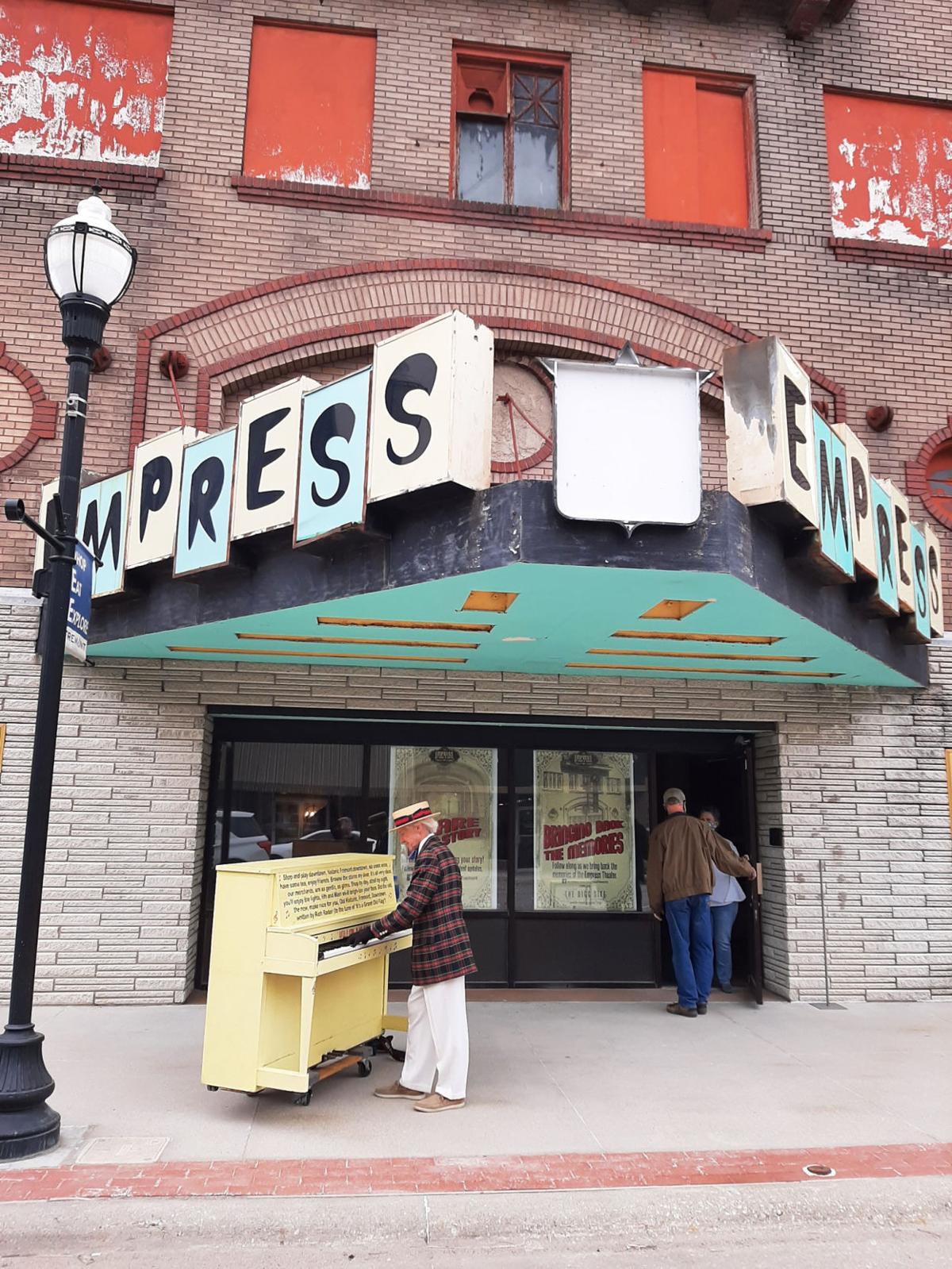 Fremonter Richard Roeder of Rader Photography plays the piano in front of the Empress Theater downtown, while a guest enters the building for a private sneak peak in March. 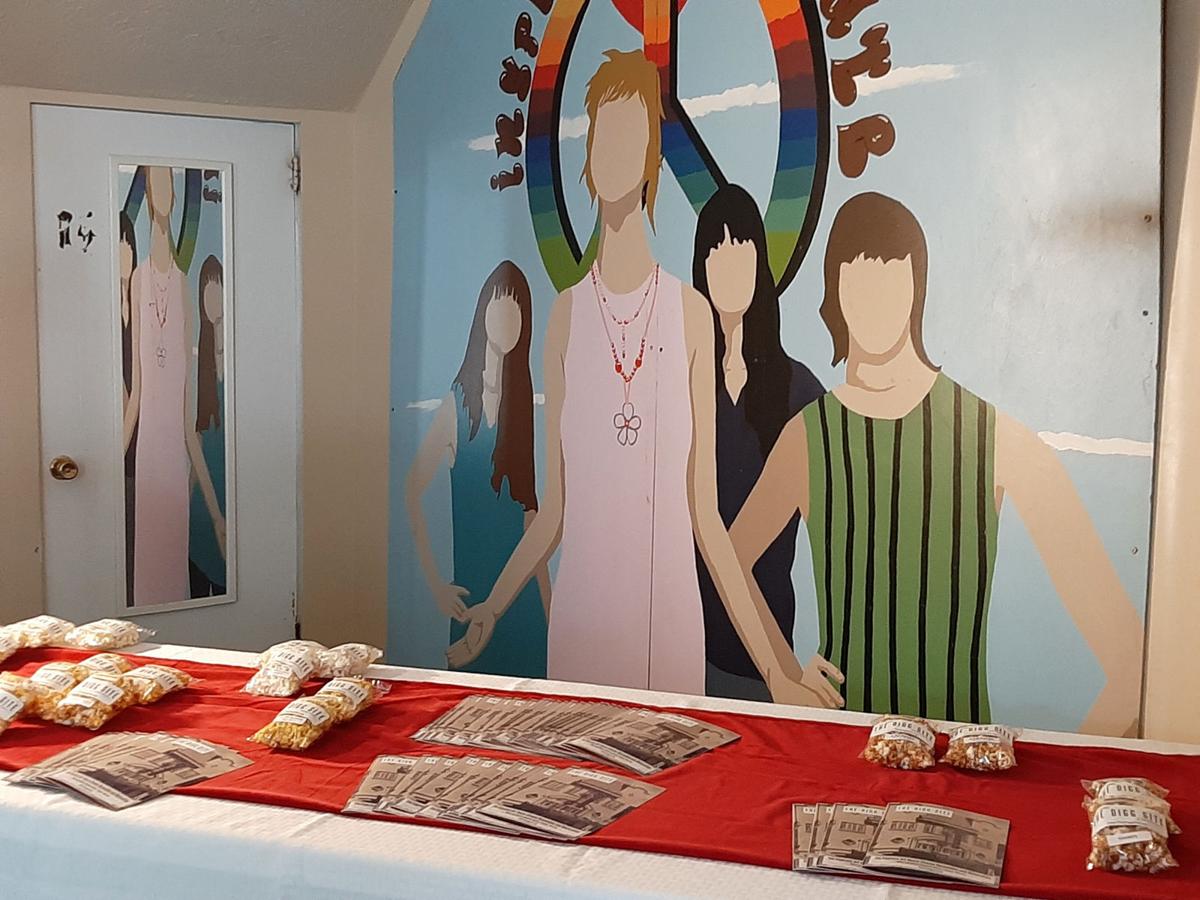 A mural and table with information can be seen in March inside the Empress Theater in downtown Fremont. 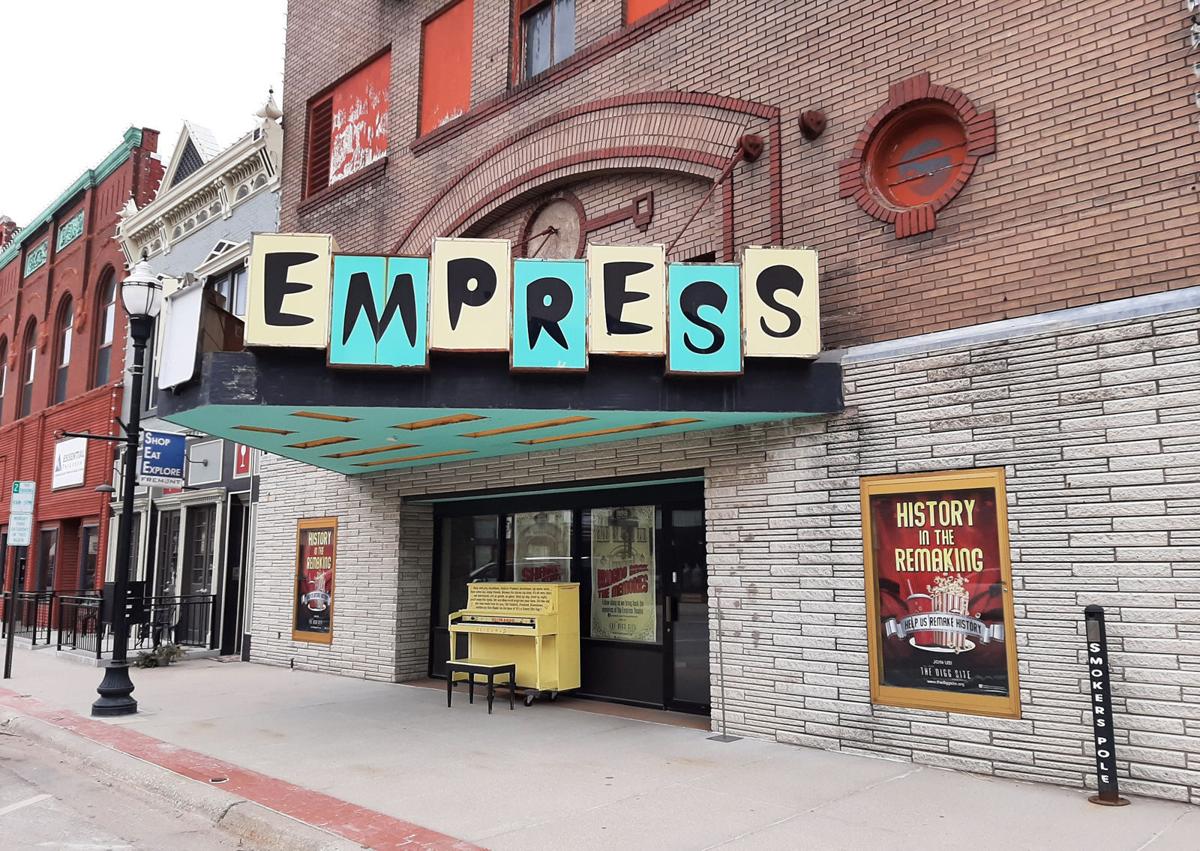 This is a view of the Empress Theater building looking toward the southwest. The building is on Main Street in downtown Fremont.

Richard Roeder remembers the day John F. Kennedy was assassinated a little differently than most people.

At the time, Roeder was a projectionist at The Empress Theater in downtown Fremont. Roeder was set to go to the theater when he learned the American President had been shot.

“When I got here, I decided to go into the projection room, tap into the radio and put that radio news broadcast on the speakers in the theater,” Roeder said. “Believe it or not, after about 10 minutes of that, the people who were here to go to the movie complained and I had to turn that off.”

They just wanted to see the movie.

Decades later, Roeder was at the theater again. This time, the Fremont man was standing outside the building at 419 N. Main St., playing a piano while guests meandered inside for a private event.

For years, the building has housed various businesses.

Now, The Digg Site Productions in Fremont is raising funds to buy the building from owner Curt Goracke as a home base for its work with plans to restore it, said Dana Reeves, chief executive officer and executive director.

The renovated theater is set to become a place where students can learn about filmmaking and where the public can see movies and theatrical productions and host meetings and other events.

Fremonter Stacy Heatherly founded The Digg Site Productions, a nonprofit organization that focuses on educating youth on all processes of filmmaking, and is on its advisory board.

“Even if they choose a different career path, they’ll still gain skills that will serve them throughout their lives,” Reeves said.

The Digg Site has a capital fundraising campaign that it will publicly launch next month for an estimated $2.2 million project which includes the building’s purchase, renovation/restoration and equipment.

Once construction has started, the project is expected to take about 18 months with an anticipated completion date in mid-2022.

The public is invited to the Empress Open House & Sneak Peak from 11 a.m. to 2 p.m. May 1. Attendees can learn about the fundraising endeavors. Former projectionist John Haxby will pop movie theater popcorn using the original Empress popcorn machine.

Free hot dogs, popcorn, and gift bags with special treats will be available for the first 250 people who stop by.

Because the open house is set a few days before the Fremont Area Big Give on May 4, (“May the Fourth Be With You”), guests from the Star Wars universe, Imperial Storm Troopers and heroes from the Rebel Alliance will be on hand.

Attendees can learn more about plans for the historic building.

Besides serving as the headquarters for Digg Site Productions, the renovated building will include:

The renovation also is designed to further beautify and enhance Main Street and the city’s historic downtown area.

Soft fundraising with private donors has been taking place. The Digg Site has received grants and pledges and encourages community support.

“We have already raised more than $300,000 for the project and we just kicked off our capital fundraising campaign in February,” Reeves said.

It’s part of the Fremont Area Big Give fundraiser.

“We want to make sure the community gets involved as well and has a sense of ownership, because we’re doing this for the Fremont and the film industry,” Reeves said.

Fremont Area Community Foundation has awarded a $50,000 grant for renovation of the theater.

“This project was appealing for a number of reasons — restoration of a landmark facility for our community, how it continues the efforts to revitalize our downtown district and the project, itself, is an investment in the community and one that we wanted to support,” said Melissa Diers, FACF executive director.

Reeves added that the Digg Site is working with the local theater and nearby drive-in theater about how to collaborate to provide more entertainment options for area residents.

Many people have made good memories here and Fremonters, like Roeder, even attribute their work at the Empress as something that led to careers in photography.

Roeder was 15 years old when he learned to operate motion picture projection equipment at the Roxy Theatre in Randolph in the mid-1950s. That theater closed after a fire.

Later, Roeder married Betty Burley and they moved to Fremont, where he worked at Plymate Sodding, then the Campbell Soup, Co.

“About the same time, I applied for work at the Fremont Theatre (at Sixth and D streets) in Fremont running the projectors,” Roeder said.

The Fremont Theatre only operated on weekends, so he’d run projectors for matinee and evening shows at The Empress Theater on Main Street.

Roeder was earning $1.87 in late 1962. He was at the Empress, the day JFK was assassinated and recalled how movie-goers wanted to see the film and didn’t want to hear any more about the U.S. President being shot.

The young projectionist’s schedule was busy with work every night, every Wednesday afternoon and from noon to midnight every Saturday and Sunday.

“I loved the movies,” Roeder said. “Movies in those days — in my view — were really well done as far as theater goes. They built emotion with the background music and the scenes.”

Roeder believes his time as a projectionist had a profound effect on his life and future career.

Beautiful music from the movies stayed with Roeder, who plays piano by ear.

“All those songs are buried in my head and, now, I hear them and I play them,” he said.

Roeder retained other facets of the movies — the lighting, posing of subjects and composition of backgrounds.

All these elements later would show up in Roeder’s work and his business, called Rader Photography.

Roeder would be part of an Omaha projectionists union for years. During that time, he’d develop an interest photography through the late Larry Koski.

Roeder’s been a photographer since the 1970s. And he wasn’t the only one who saw a career develop from his projectionist days.

John Haxby of Lincoln grew up in Fremont, when it cost 15 to 25 cents to see a movie at the Empress.

“I’d get a lot of friends together and we’d all come down and watch a movie, get some popcorn and just enjoy life,” Haxby said.

While in college, Haxby met Norm Spurlock, a part-time police officer and fulltime projectionist, who worked at the Empress and Fremont Drive-In.

Haxby was majoring in photojournalism in the mid-1970s, when Spurlock showed him how to run the projection equipment at the Empress.

“If the movie was good, I’d watch it every time and if not, I’d read a book,” Roeder said.

“Norm quoted to me that he ‘burned The Towering Inferno’ 37 times, before they changed movies,” Haxby said. “That’s a lot of runs.”

Haxby appreciates his time at the Empress.

“How many people can say they were a projectionist at a theater?” he said.

Haxby is pleased about the Empress restoration plans.

“It’s fascinating that everybody would come together to make this work in Fremont,” Haxby said. “Instead of tearing down old buildings, they’re going to turn it into something good.”

“This could be the catalyst to bring extraordinary life to downtown Fremont,” Roeder said. “I believe downtown Fremont is a gold mine of opportunity waiting to be discovered.”

As a young businessman, Curt Goracke saw the value of preserving a downtown landmark.

Carol Bohling and Jan Ostransky have been seeing local interest in the Nebraska Nurse Honor Guard.

Carol Verbeek’s quest to honor her grandmother became an endeavor to pay tribute to many moms.

Calendar of events for April 27-29

Having grown up in and driven around south Fremont, Mayor Joey Spellerberg said he knew the importance of the Fremont Southeast Beltway Project.

Fremont Christian Women’s Connection will have a noon meeting on Monday, May 10, at Lighthouse, 84 W. Sixth St., in Fremont.

Friends of Keene Memorial Library are looking ahead to the Fremont Area Big Give on May 4.

Whether they were a good citizen or otherwise helped make the community better, area residents and people in two school systems were recognize…

Fremont Area Big Give set for May 4

The 2021 Fremont Area Big Give is Tuesday, May 4. This year’s theme is “May The Fourth Be With You.”

Fremont Opera House to offer guided tours on May 4

Fremont Opera House will be offering tours during the Fremont Area Big Give on Tuesday, May 4.

Fremonter Richard Roeder of Rader Photography plays the piano in front of the Empress Theater downtown. The Digg Site Productions is planning a $2.4 million restoration/renovation of the Main Street building, which will be used for a plethora of purposes.

People stand outside of the Empress Theater on Main Street in downtown Fremont.

Stacy Heatherly, left, founder and advisory board member of the Digg Site Productions in Fremont, stands inside the Empress Theater during a private sneak peek in March. Nearby are Sally Fischer of Fremont and Andrea Miller of Omaha.

Fremonter Richard Roeder of Rader Photography plays the piano in front of the Empress Theater downtown, while a guest enters the building for a private sneak peak in March.

A mural and table with information can be seen in March inside the Empress Theater in downtown Fremont.

This is a view of the Empress Theater building looking toward the southwest. The building is on Main Street in downtown Fremont.