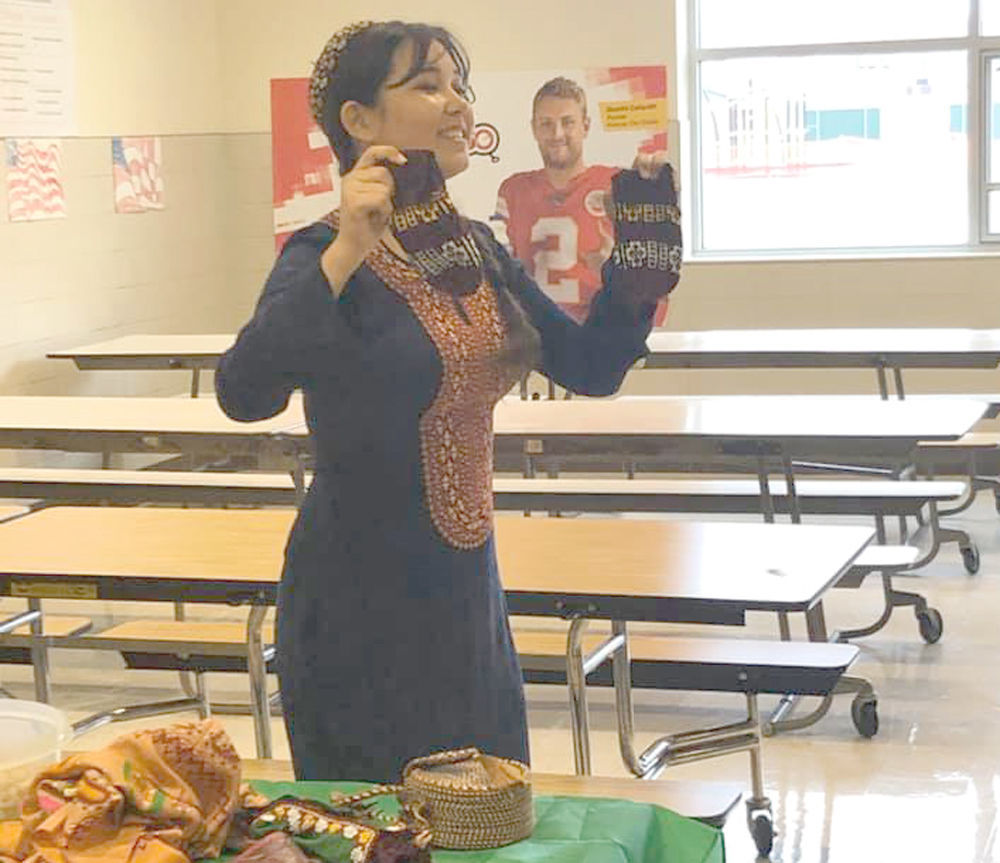 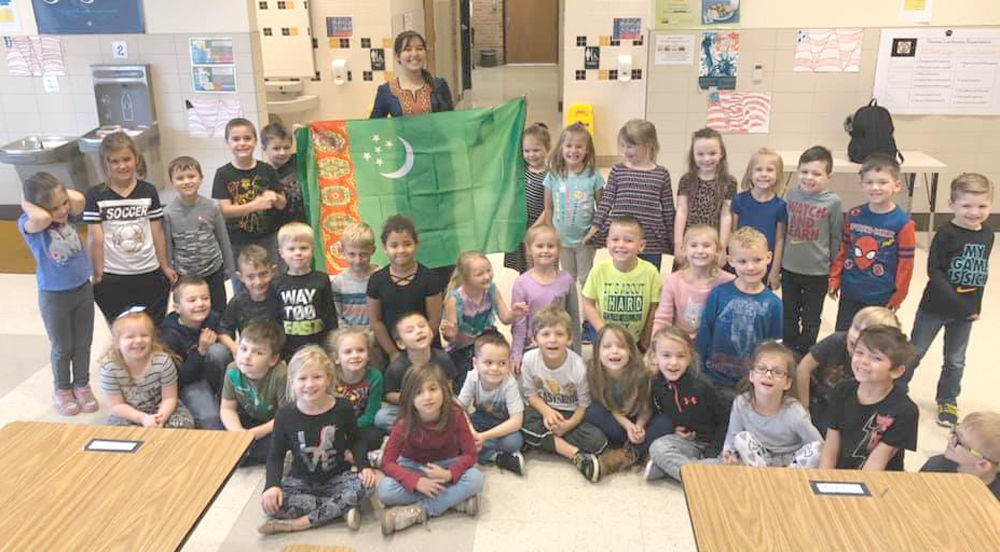 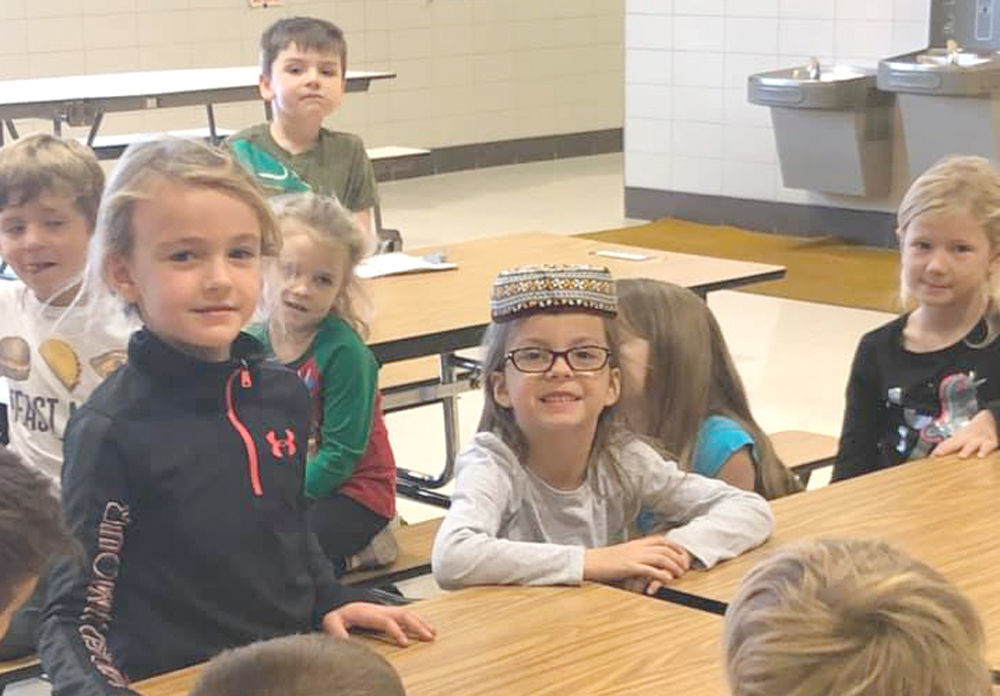 A Clarmar Elementary kindergartner wears a talhya, a traditional hat to protect its wearers from the sun, at a presentation by foreign exchange student Selbi Dovlevota last week.

A Clarmar Elementary kindergartner wears a talhya, a traditional hat to protect its wearers from the sun, at a presentation by foreign exchange student Selbi Dovlevota last week.

Mary Wallen admitted she didn’t know where Turkmenistan was when Lou Ann Bauer asked if a foreign exchange student living with her could talk to the teacher’s kindergartners.

Selbi Dovletova, a student at Fremont High School, spoke to Wallen’s kindergartners at Clarmar Elementary School last week about her country and its traditions, culture and customs.

Bauer, who attends Fremont Nazarene Church with Wallen, previously had a student from Ghana living with her who also spoke to Wallen’s students.

Dovletova came to the country with the Future Leaders Exchange (FLEX) Program. The program requires passing three exams before being chosen to come to the United States.

“Everything is free, including the ticket and living in America, and they even give you a scholarship,” Dovletova said. “I participated in that program, and they chose me as a finalist, so that’s why I came here.”

Dovletova arrived in the country on Aug. 13 and will leave June 4. Many of the foreign exchange students in the FLEX Program are required to hold a presentation on their country during International Education Week.

“So any time that she has anybody that’s ready for presentation, she gives me a call, and if we’re available, we take them,” Wallen said. “So that’s kind of how that all got started, and it’s been wonderful for our kids.”

Turkmenistan is a country in Central Asia just north of Iran and northwest of Afghanistan. It has a population of nearly 6 million and was previously under the rule of the Soviet Union.

Dovletova said with her presentation, she tried to simplify it so that the students would be able to understand her country better.

“I was talking about the games for kids, like traditional games and that kind of stuff,” she said. “And for school, I added a little bit about the history of the Turkmens and the most-visited places in Turkmenistan and about wedding traditions and holidays.”

Although troubles with technology delayed her presentation a bit, Dovletova said she was able to hold off the students with some traditional pastries.

“She made them for all the kids, everybody got to taste them, and in fact, they got as many as they wanted to,” Wallen said. “She brought quite a bit.”

Dovletova also spoke about the capital of Turkmenistan, Ashgabat, which is where she lives. The buildings which are all made of marble, which Wallen said was surprising to the students, as they previously thought it was just all desert where Dovletova lived.

“Everything is really all white, so I was showing them pictures, and they were really excited and surprised about that,” Dovletova said.

The students were also excited to see the clothes that Dovletova showed to them. She explained the school uniforms for boys and girls, including the talhya, a small hat that protects people from the sun.

Dovletova showed a Barbie doll wearing a traditional school uniform that she later gave to Wallen.

Dovletova also showed the students pictures of the world’s largest indoor Ferris wheel at the Alem Cultural and Entertainment Center and the Darvaza gas grater, a gas field opened up by Soviet engineers who were looking for oil. Although they believed the field would disappear in a week, it has been burning since 1971.

“Everybody was so excited to see that, and they were like, ‘I want to go to Turkmenistan, I want to visit that,’” Dovletova said. “They even started to ask me how they can go there, how much it would be, so that was cool.”

Wallen said the students were “thrilled” throughout Dovletova’s presentation. She said one boy kept saying he’d been to the country during the presentation.

“And he hasn’t been there, he’s a kindergartner that just got into it,” Wallen said. “So when he gets into it, then he tells you, ‘I’ve been there,’ because he knows so much about it.”

With this presentation, Wallen said her students were able to see life outside of what they previously knew.

“I think they also connected with Selbi and her country,” she said. “And they took away an idea of life different from theirs, but still the same because she still lives in a country where there’s still buildings and all of these things that we have.”

Bauer said the presentation was a not only a great opportunity for the exchange students, but an opportunity to help the kids dream bigger than just where they’re from.

“It gives them something maybe to look forward to see when they’re older, so they think, ‘Oh, I can travel. I’m going to go to a different country,’” she said. “It just gives them a new perspective on life, I think.”

The students were also able to connect with more than just Turkmenistan, but the world around them, Wallen said.

“It’s not just Fremont, Nebraska. It’s not just Nebraska,” she said. “But we’re connected to the whole earth, and that’s one piece that I stress, that we are a connected people, and we need to treat each other with respect and dignity.”

For Dovletova, she believes it’s always good to just expand one’s view of the world.