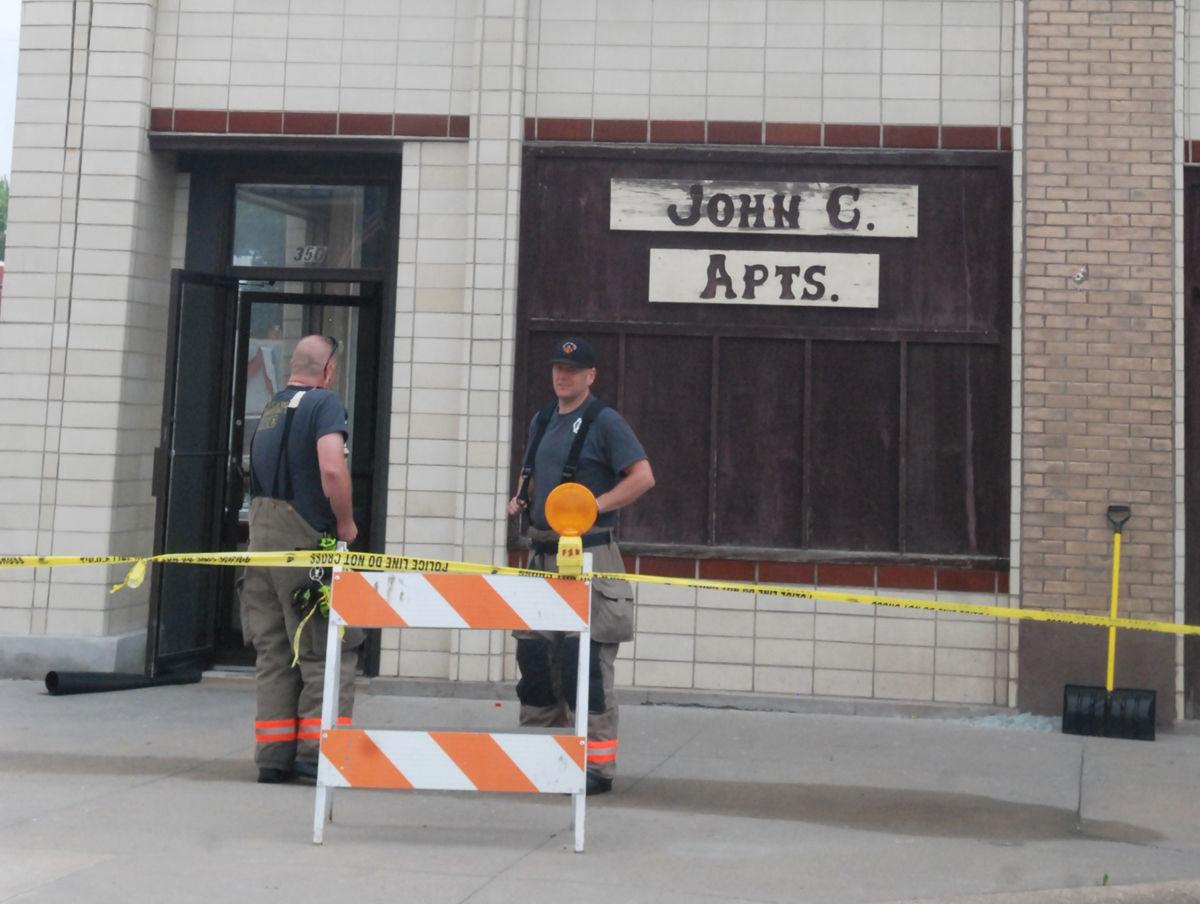 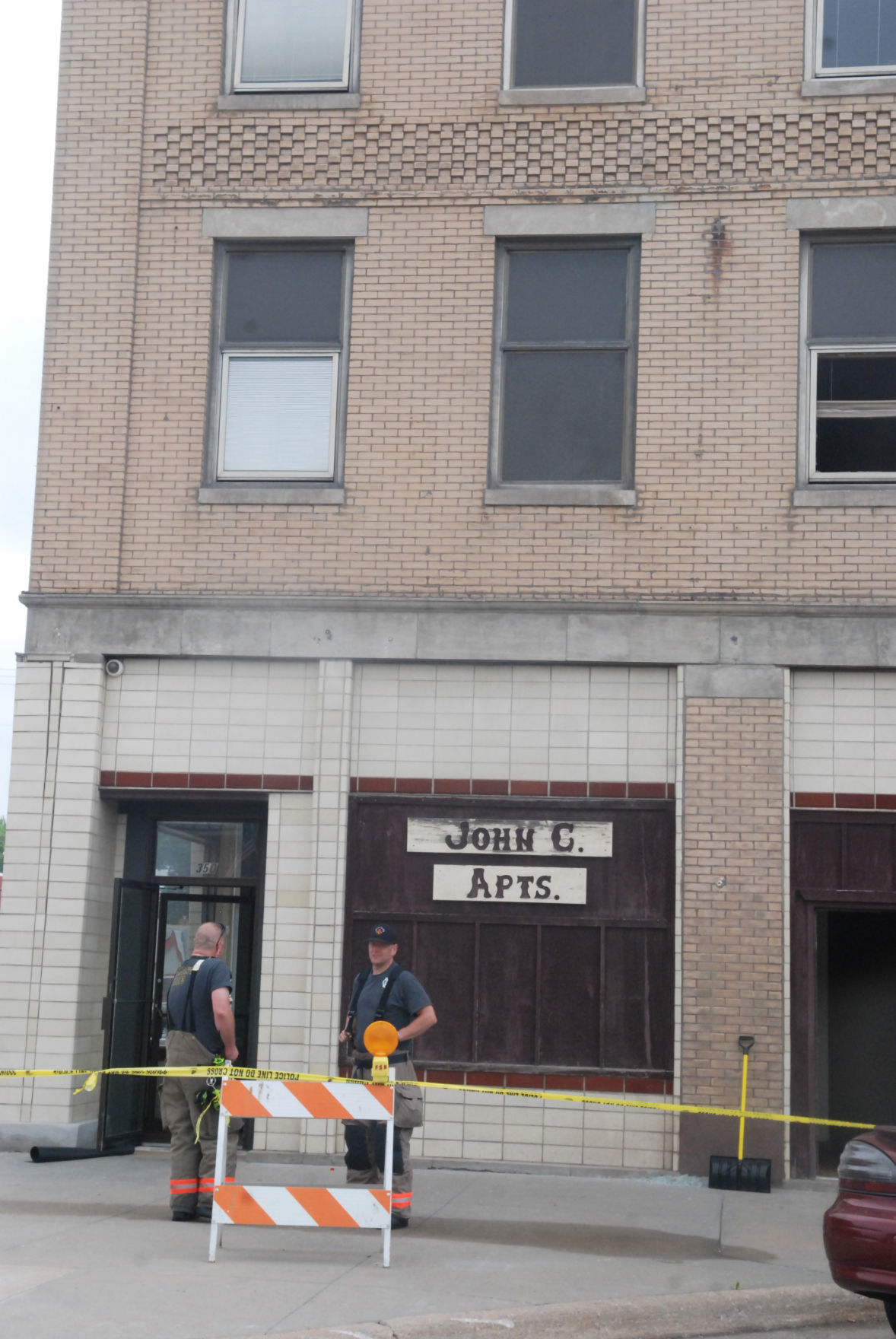 Brandon Osness doesn’t know the name of the woman in Apartment 305.

But the young Fremont man credits her with helping him and his 7-year-old daughter, Eve, get out of a smoky apartment building more quickly—maybe even saving their lives.

Fire broke out at about 2 a.m. Saturday in the downtown John C. Fremont Apartments.

Fremont Fire Capt. Tom Christensen said two people—one of whom was a firefighter—were transported to the hospital.

Smoke was heavy and coming from all areas of the building when the first seven firefighters arrived on the scene.

“Most of the residents evacuated themselves, but a couple had to be rescued,” Christensen said.

Osness, who shares custody of his daughter, has lived in a third-floor apartment for about 1 ½ years.

Somewhat of a night owl, Osness was still awake at 2 a.m. when he heard the fire alarm start to blare.

“I thought it was just another false alarm,” the 26-year-old man said.

There had been false alarms before, but Osness followed his routine of getting out of bed and dressed in case he’d need to go outside.

Then he heard someone banging on a door in the hallway.

Osness looked out of his door and saw a haze in the hall.

Shutting the door, he woke up Eve, told her to put on shoes and get her robe. He grabbed his keys, wallet, shoes and phone.

He looked out again.

The smoke had increased.

Osness had taken Eve’s arm and stepped into the hallway when he saw the middle-aged woman who’d been banging on doors, trying to warn others.

She was the friendly woman who lived in Apartment 305.

“She’s always been nice and always had a smile on her face and she might have saved my life this morning,” he said.

In the hallway, she sprinted past Osness and his daughter.

They followed as she opened the door to an interior stairwell.

“But when she opened the door, we could see that smoke was rising rapidly. More smoke was billowing into the hallway,” he said.

She let the door close and ran back toward the end of the hallway where she’d been originally.

Osness and his daughter followed.

“We’d only been out in the hallway for all of 10 or 15 seconds at the most when I noticed my breathing was being affected,” he said.

“I told Eve to cover her mouth with her shirt and I did the same and we both sort of ran in a hunched over position toward the west end of the corridor,” he said.

The woman said the other stairwell was filled with smoke, too, but she peeked around the corner where she’d previously punched the elevator button.

They followed her into the elevator.

“I’m aware that they tell you that you shouldn’t get into an elevator during a fire, but we were scared to go down the stairs with the smoke rising in our faces and we didn’t know where the fire was,” Osness said. “When the elevator doors opened—it was the only place that had clear air at that point. We were terrified.”

In the elevator, the woman hugged Eve, reassured Osness and prayed aloud for God to get them through.

The three made it to the first floor and ran out the entryway.

“At that point, the woman who was with us saw a lady who was covered head to toe in soot,” Osness said. “She was torn between leaving the building and returning to the lobby. She was visibly distraught.”

The distressed woman in the entryway tried to get back into the lobby. But the woman from the elevator grabbed and dragged her out of the building.

Once outside, Osness and his daughter heard glass breaking from second floor windows and falling to the sidewalk.

“We looked up and saw a guy sticking his face out of the window,” Osness said.

Osness isn’t certain, but thinks between 15 to 20 people lived in the building. Other apartment dwellers, who’d left the building, talked to the man on the second floor.

He said his hallway was filled with smoke.

A Fremont police officer ran into the entryway, but didn’t go further and told apartment dwellers to get back. They went to the sidewalk across the street.

“Every second felt like forever in that moment,” Osness said.

Firetrucks arrived on the scene. Firefighters leaned a ladder against the side of the building to reach the man on the second floor.

The bottom two-thirds of the man’s window had a barrier. A firefighter climbed the ladder with an ax in one hand to break down the barrier.

By then, Osness’ daughter said her stomach was upset and she got sick. A sheriff’s deputy asked if the child needed to see a medic, but Osness believes she became ill due to nervousness. She calmed down.

At that point, the middle-aged man from the second floor was on the ground.

One female was transported to the hospital as was a Fremont firefighter who had a medical issue. The firefighter remained hospitalized Saturday morning. No other information was available on the female.

Most of the fire was on the apartment building’s second floor, but it extended to the third. The building sustained smoke and water damage on all floors including the basement.

“It took extensive crews and overhaul to get all the hot spots out,” Christensen said.

All three shifts of Fremont firefighters were called in and mutual aid was called into Fremont Rural, Cedar Bluffs, Valley and Arlington volunteer fire departments. Midwest Medical was on scene with an ambulance. Fremont Police and the Dodge County Sheriff’s Department responded as well.

Christensen did not have an estimated amount of damage Saturday morning.

He said Riff Raff Relics, a store in a building connected to the apartments, had water and smoke damage. The store, he said, just opened in October before the coronavirus pandemic.

Christensen said smoke damage was reported in the nearby Country Tradition’s building.

The Nebraska State Fire Marshal was on the scene Saturday investigating the cause of the blaze.

Osness said he was told there was extensive water, smoke and heat damage to the apartment building.

“I’m fearing that we’ve lost everything, but we’ve not been let back in yet,” Osness said. “Obviously, it’s not habitable.”

Osness is staying with his parents, Mark and Dawn, in Fremont.

“The fireman we spoke to said because of the way fire works, the heat and smoke were most intense on the third floor,” Dawn Osness said. “He said if we were let in to bring a flashlight, because there’s no power to the building and to make sure to wear protective clothing and probably work boots, because there’s a lot of glass and debris throughout.”

Osness and his mom said the apartments’ owner took pride in the building and it had been well maintained.

The fire had created a jog in Osness’ planned trajectory.

Just last week, he graduated from the University of Nebraska at Omaha with a degree in international studies. His dream job would be a position in the foreign service of the U.S. State Department.

Currently, he does bookkeeping work in a downtown office just a couple blocks from his apartment. He appreciates already being employed as opposed to being a graduate thrust into the job market.

Eve’s mom has been working from home. The girl stays with her mom during the day. Dad has the girl on weekends and evenings.

On Saturday afternoon, Osness looked honestly at his situation.

“Four grueling years of college finally over and then you graduate in the middle of the coronavirus and have your house destroyed by fire and smoke,” he said.

But he appreciates his blessings—getting to stay with his parents while he hunts for another apartment.

He is thankful that he and Eve were able to get out of the building.

And he’s grateful to the woman who was banging on doors.

“I can credit her with helping me and my daughter out of the building,” he said. “If she hadn’t banged on doors, I might not have realized the severity of the situation as quickly as I did—and then she had a lot of initiative to go check the stairwells for smoke. She just jumped into action.”

This story has been changed to correct the name of the building that sustained smoke damage.

Janice Lee has lassoed a little bit of Nebraska with her rugs.

Stephani Stephenson knows Relay For Life activities will be a little different this year.

Youth baseball and other city programs for kids won’t take place this summer.

Pastors talk about how COVID-19 has changed outreach

The Rev. Judy Johnson can see how coronavirus restrictions have propelled her churches into a different form of ministry.

Cemetery flowers will need to be removed

The Memorial Cemetery Association Inc. reminds area residents to remove all decorations and flowers that you wish to keep, even those in perma…

The Fremont Fire Department responded to a fire at a duplex in south Fremont Sunday afternoon.

Conservation Nebraska will hold an online discussion on flood predictions and the role that humans play in it.