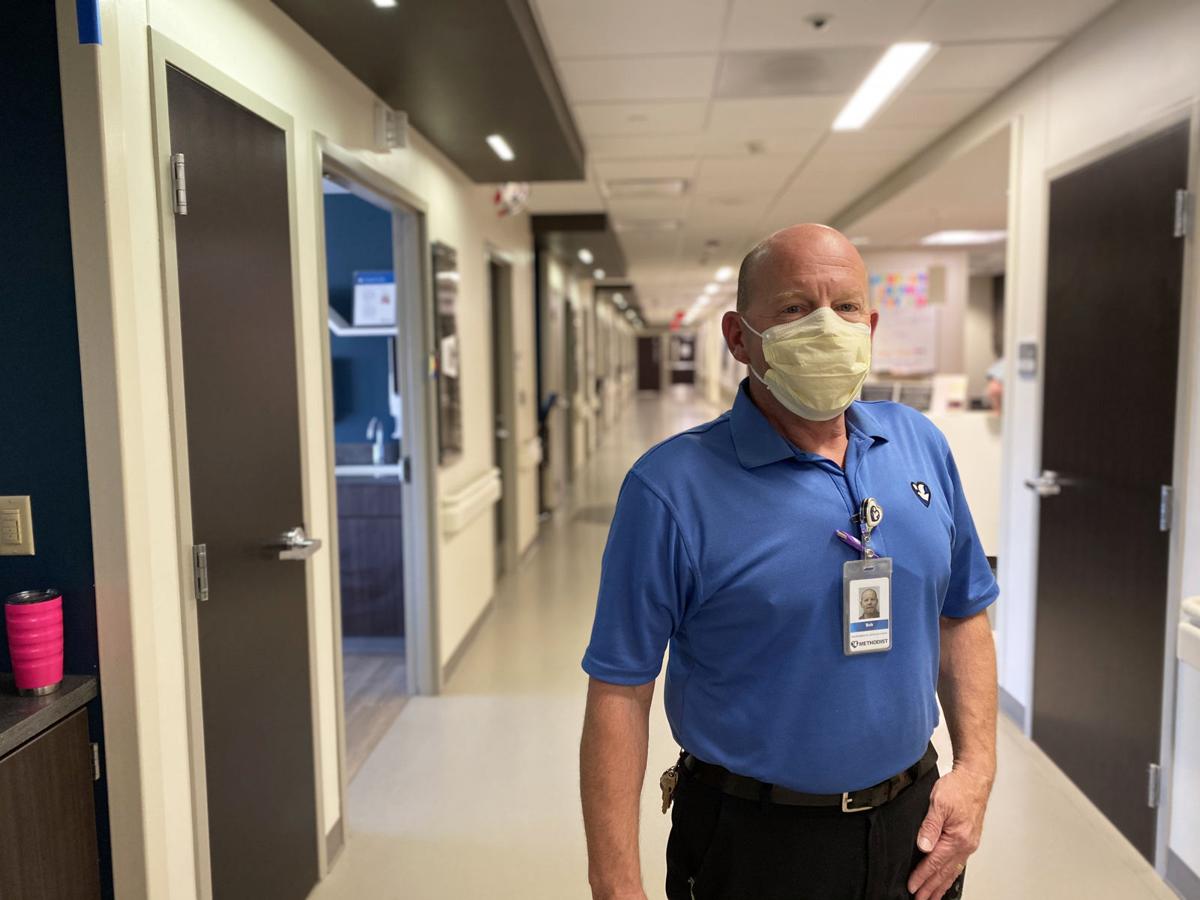 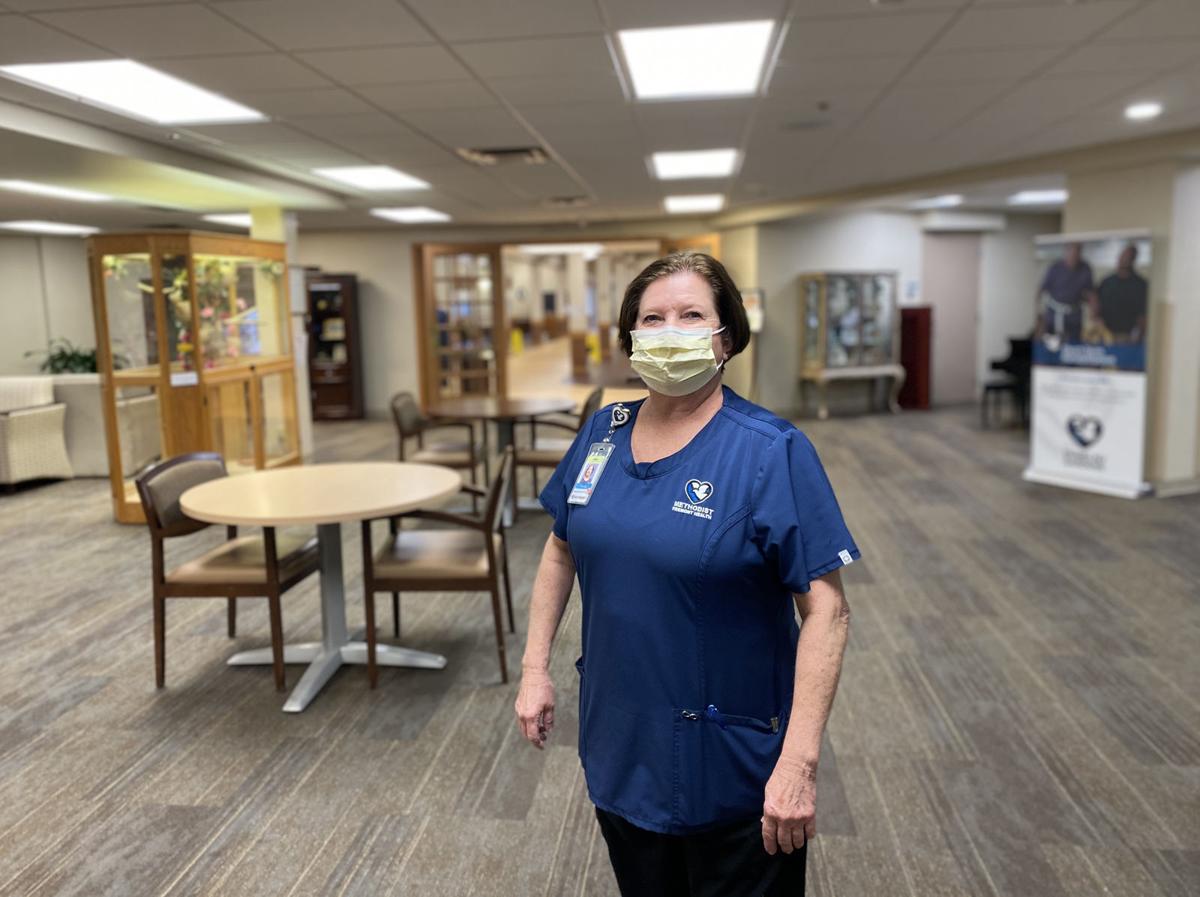 Rachelle Jelinek works in the Environmental Services department for Methodist Fremont Health and is shown at Dunklau Gardens. 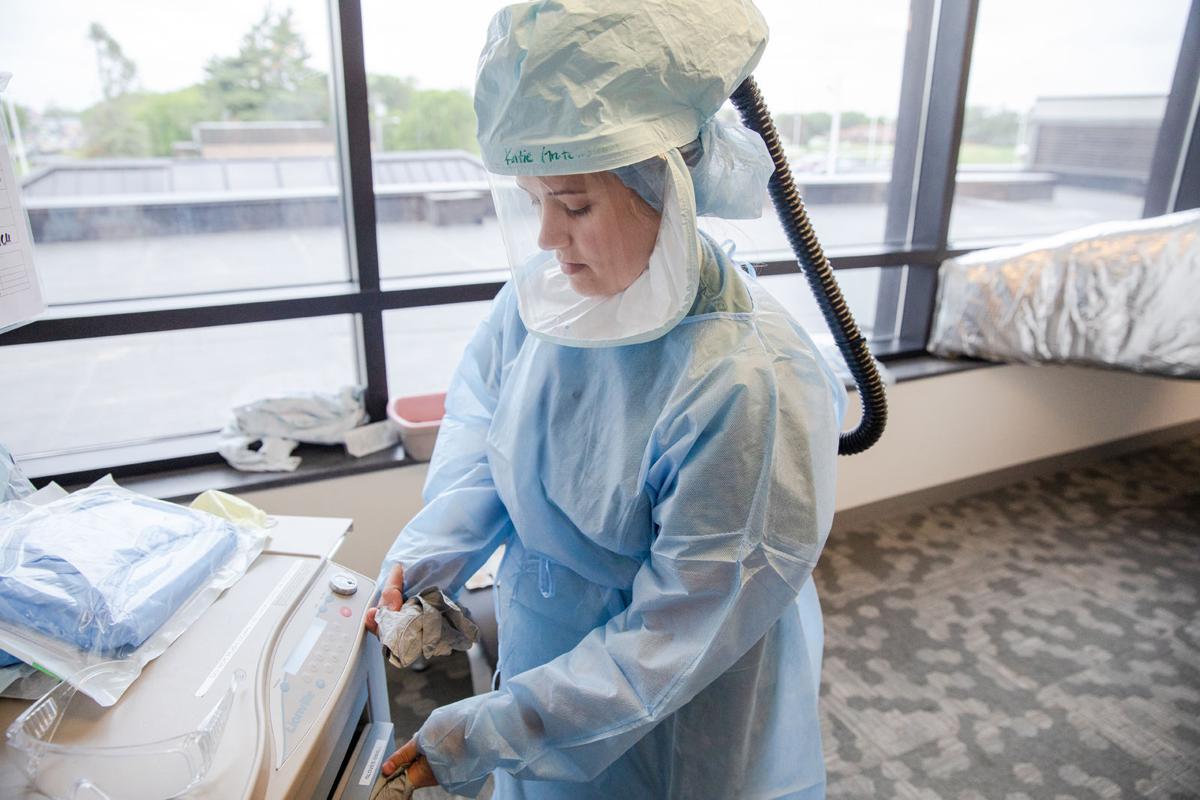 Editor’s note: Methodist Fremont Health received its first COVID-19 patient a year ago this week. Last September, a Fremont Tribune story highlighted nurses on the frontlines. This week, the Fremont Tribune is casting a spotlight on the behind-the-scenes people who’ve helped in the fight against a pandemic.

She became their link to the outside world.

As the days of the COVID-19 pandemic stretched into months, Jelinek knew that the only people residents saw, in person, were the nursing staff and cleaning personnel.

So Jelinek talked with residents about simple things like:

The secret ingredient that makes pie crust so good.

The joy of grandchildren.

And memories of a retired Navy man’s first date with his wife.

During the COVID crisis, the department has faced the monumental task of keeping facilities clean in the daily fight against the deadly virus.

In the process, they’ve earned the acclaim of those around them.

Chaplain Scott Jensen, who had a part-time cleaning job while in college and seminary, expressed his gratitude for the workers, whom he said cleaned without fanfare.

“There’s a special place in my heart for the thankless job that is absolutely critical. They do a phenomenal job. They have great attitudes,” Jensen said.

Other things changed, too.

Previously, a cleaning person hadn’t been assigned to the emergency department during the day.

Now, they had to be there as patients were tested for COVID, because the areas had to be cleaned even more thoroughly than what the ED techs would do in between patients.

Shaun Custard, MFH vice president, talked about how rapidly rooms had to be sanitized.

“As busy as we were for a while, they needed to quickly do it,” Custard said. “When one patient leaves, the room needed to be quickly cleaned and be ready for another patient. They did a fantastic job.”

Howard noted that it did seem like a race at times.

Other factors were involved.

For instance, cleaning personnel had to let a room sit for up to a half hour (depending on the room) for the air to cycle through after a COVID patient left.

Then they could go in and clean.

The cleaning product they used had to stay wet for five minutes to kill the virus on a surface.

When the chemical they used became unavailable for two months, they had to switch to another.

It was a good product, too, but had a 10-minute kill time. In some instances, cleaning people then had to re-wet the surface.

With so many people being tested for COVID, the cleaning work was exhausting.

“It was really daunting sometimes, but we could handle it,” Howard said. “It’s just something you do. You live up to the task.”

Howard also saw staff shortages. As a department, they can be short-staffed as people retire.

And during the earlier days of COVID, it seemed like people didn’t want to work in a hospital setting.

“A lot of people put in a lot of extra time,” he said.

Like other hospital employees, Howard was concerned that although he took precautions, he might expose other family members to the virus.

So while he could talk to his mom, Louise, on the phone, he didn’t go see her in person.

He has family members who work at Methodist Fremont Health as well.

His daughter, Jen, is a respiratory therapist. His sister, Robin Liesche, works in the dietary department and sister-in-law, Chris Nelson, is a medication aide in Dunklau Gardens.

As he mentions his family, Howard is inclusive when talking about patients, too, often referring to them as “our patients.”

“The patients are here — usually not of their own free will — they’re here, because they’re sick or injured,” he said. “It’s our job to try to make their stay here as good as possible. Especially during this pandemic, there were not a lot of people who were able to come up and visit, so sometimes between the nursing staff and our staff, that’s the only people they got to talk to.”

“Usually, it’s go in and clean and get out, but during this time they spent extra time in the rooms to visit with people who were a little more lonely than others,” Howard said.

An 18-year employee of Methodist Fremont Health, Jelinek knew the importance of maintaining a positive attitude.

She encouraged residents to take one day at a time when they wondered how long the pandemic would last. She’d talk and joke with them.

“They’d tell me about their grandchildren and they wanted to hear about my grandchildren or what I did when I got home,” she said.

One resident said she had the best pie crust recipe. The secret was adding a little vinegar to the mixture.

Jelinek said she knew that secret, too, and later got permission to bring the resident a piece of her strawberry rhubarb pie.

She listened to the residents’ stories.

A Navy veteran told her how he met his wife. He didn’t have a car for their first date, so his sergeant let him use his car so he could go meet her.

“You could just see the love in his eyes,” Jelinek said.

To help mitigate the spread of the virus, Jelinek said she’d go to work and then go home and not to other places. She’d don the Personal Protective Equipment (PPE), including a gown, mask and face shield, when cleaning certain rooms.

“It’s like we were on a mission to take care of them and that’s what we did,” she said.

Howard praises his staff for their commitment.

“They’ve all stepped up really well,” Howard said. “They’ve taken the situation that we’ve been working in for the last year and instead of grumbling, they just stepped up and have taken it as a way to work, and accepted it. No complaining. It’s just the way it is now. It’s our new normal.”

Howard finds hope in the declining numbers of COVID patients.

“It’s down to one or two instead of 10 or 12 or 13. We have weeks when there’s none upstairs and as far as I know right now we have no positive cases in Dunklau Gardens,” he said last week.

As he looks ahead to better times, Howard continues to appreciate the role that behind-the-scenes workers, often described as “unsung heroes,” play.

“I know, sometimes, some people think that housekeeping or environmental services doesn’t appear to be a task that you should try, but we take great pride in our work,” he said. “We have a very clean hospital and we take pride in knowing the work we do is not causing anybody any harm or any more sickness to anybody else.”

Library board members talked about eliminating fines, but not fees when they met Monday night.

When she talks about the art in Gallery 92 West, Angie Olson makes note of the variety.

Calendar of events for March 26-28

Starting as a seasonal employee at Dead Timber State Recreation Area in the early 1980s, Jim Swenson remembers the passionate and caring peopl…

Michael Guilliatt of Fremont has qualified for Top of the Table, a coveted milestone achievement for their Million Dollar Round Table (MDRT). …

Hy-Vee, Inc. recently announced that it will host its second “Best of Local Brands” summit in May to expand and enhance the product offerings …

Calendar of events for March 27-29

Find out details about Easter-themed events, a family dinner and more.

A COVID-19 educational event for seniors will take place at 2 p.m. Tuesday, March 30, at the Christensen Field Meeting Room in Fremont.

Calendar of events for March 30-April 1

Find out more details about area events and meetings planned for March 30-April 1.

Tom Ziegler speaks with pain and admiration as his talks about his late wife.

Hy-Vee, Inc. announced Wednesday that the COVID-19 vaccine is now available at all of the company’s more than 270 Hy-Vee Pharmacy locations ac…

Rachelle Jelinek works in the Environmental Services department for Methodist Fremont Health and is shown at Dunklau Gardens.