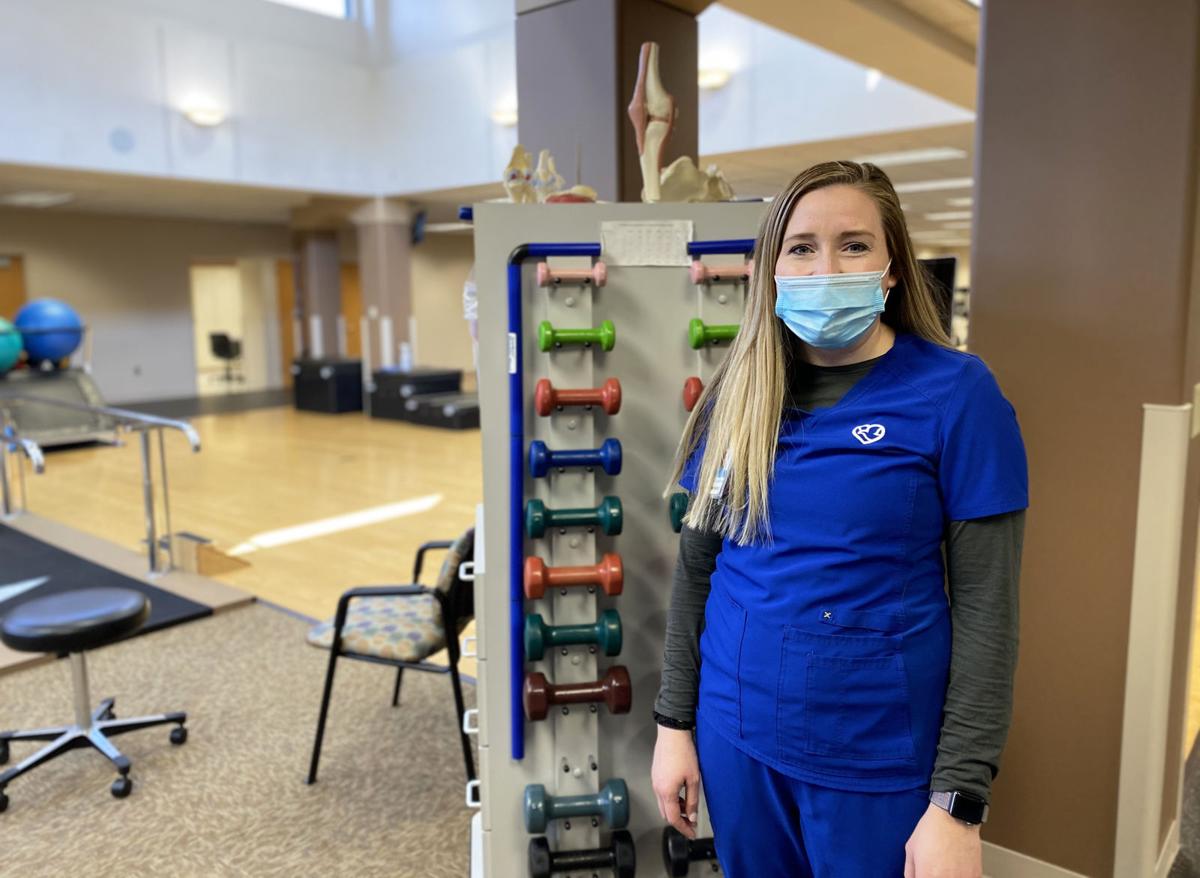 Alli Greene is an occupational therapist at Methodist Fremont Health. 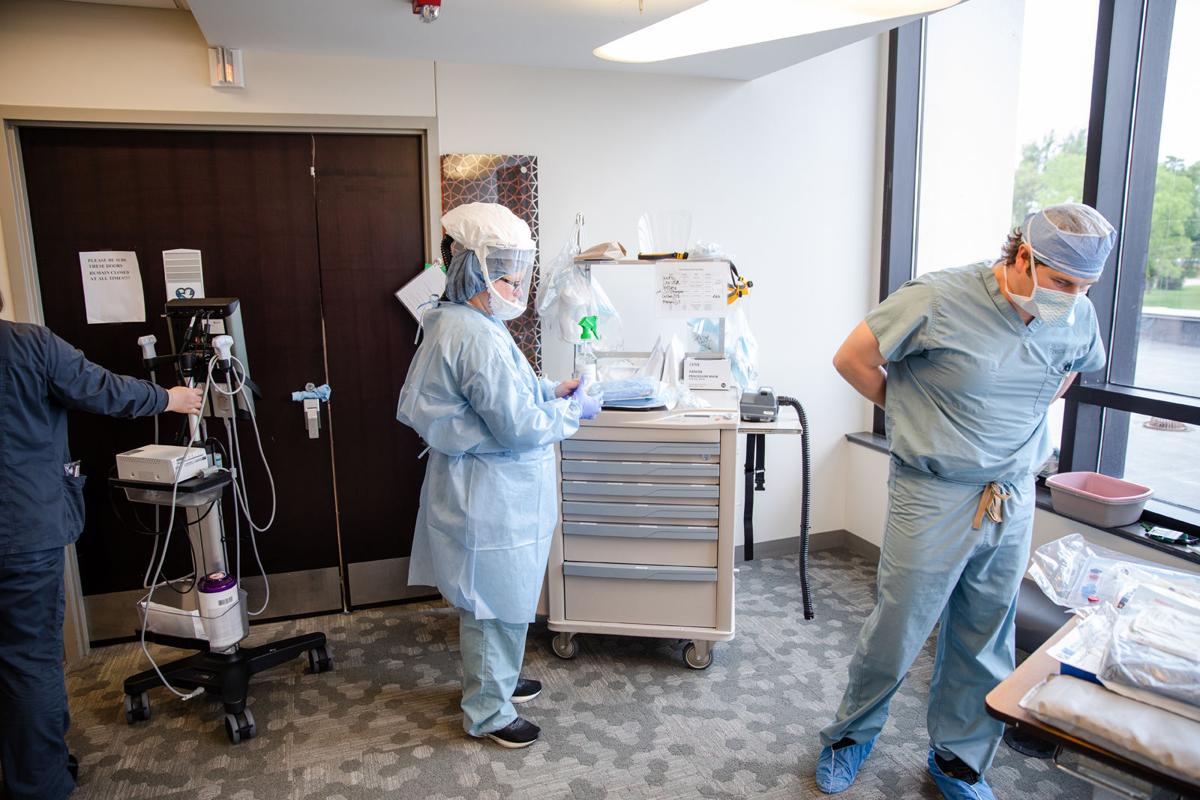 Editor's note: Methodist Fremont Health received its first COVID-19 patient a year ago today. Last September, a Fremont Tribune story highlighted nurses on the frontlines. This week, the Fremont Tribune is casting a spotlight on the behind-the-scenes people who helped in the fight against a pandemic.

The COVID-19 patient hadn’t taken a step, but Alli Greene saw him make a huge stride.

It happened in a COVID hospital room at Methodist Fremont Health.

Greene and physical therapist Kelly Hatcher were working with a patient who’d been on a ventilator for a long time.

Even seeing him make small achievements, like sitting on the edge of his bed, were encouraging, especially considering how sick he’d been.

One day, they decided to let him try to stand on his own.

It took the two of them to hold him up, at first, and they figured they’d need to keep doing so.

“But he stood from the edge of the bed almost by himself and I remember getting goosebumps,” Greene said. “His wife was there and I think she had tears welling up in her eyes, too, because he’d made so much progress even in a short amount of time.

“And he was one that they had thought would probably never make it.”

It was a hope-generating moment.

Few people saw the work of Greene and Hatcher and many others like them — those behind-the-scenes heroes.

Each one may have been unsung in the public realm, but each has played a vital role in the fierce battle against a deadly virus and its heart-wrenching effects.

Greene has been an occupational therapist for four years and treating lymphedema (chronic swelling) is her specialty. Her job includes helping patients recover the skills they need to perform daily tasks such as getting out of bed or standing at a sink long enough to brush their teeth.

Greene recalls when she and others first learned about the COVID-19 pandemic.

“We were kind of scared,” she said. “Seeing everybody around us wearing their COVID (protective) gear was kind of intimidating. It was still back when we didn’t exactly know what everybody should be wearing and there were pictures of nurses at UNMC wearing the full-blown suits.”

Typically, Greene’s job involved working with people in the outpatient department and then with other patients in the hospital as she had opportunity.

After the pandemic hit, she’d spend the last two hours of her day working with COVID patients.

That way, she could go home and shower and she wouldn’t be going back and forth between healthy patients and those with COVID.

She didn’t see COVID patients until about a month after the hospital had its first one.

“The reason was because they were so incredibly sick and had been on ventilators,” she said.

Doctors began advocating for professionals like Greene to work with patients, some of whom were starting to get better and for whom a discharge was possible.

“Before that, there were several deaths,” she said.

Greene, Hatcher and others were taught how to use the Personal Protective Equipment (PPE).

Then they went to work helping patients.

Greene found that patients, who’d been on a ventilator for a long time, couldn’t even lift their arms off the bed.

“Eventually, we started working with them on sitting on the edge of the bed,” she said.

They’d work on core strength, being able to hold themselves up.

Greene recalls two patients, who’d been on ventilators for a long time. She didn’t think they’d ever be able to breathe on their own.

“One was able to go home and he was walking on his own and the other one — just to see him be able to support himself on the edge of the bed and sit up to look at his wife was pretty incredible,” she said.

He was among patients who’d bring tears to their eyes.

She recalls how far that patient had come.

“When we first started, even just rolling him on his side, his oxygen would drop and it was just kind of scary at first,” she said. “And then after two weeks of us gradually working toward him sitting on the edge of the bed, he started getting stronger by the day.”

That’s when they decided to try to let him stand. He needed two people to help hold him up.

Then came that “goosebump” moment when he was almost able to stand by himself.

“I had so much hope for him being able to return to a somewhat normal life and it reminded me of why I chose my career path — being able to help patients do things on their own again at the lowest point in their life,” Greene said.

Staff would host a little party when patients, who’d been in the hospital for a long time, were ready to leave.

“We lined the hallways from their hospital room to the elevator and we’d holler and cheer and clap for them on their way out,” Greene said. “There were a lot of teary eyes in the hallway that day when he left.”

Staff experienced many sad moments and Greene recalls the loss of patients whose lives were taken by the virus.

“To come in, in the morning, and find out that one of your patients that you’ve worked with a lot has passed — and that happened every single day — that is emotionally fatiguing,” she said.

She noted something else.

“Nurses are trained in school about dealing with death and dying,” she said, “but that was really new to us in the therapy world.”

Some of an occupational therapist’s patients will die.

“But this was on a whole other level,” she said. “We were losing several of these patients that we’d spent so much time with.”

Hospitals across the nation saw the virus-associated mortality rates of COVID-19, which according to the Centers for Disease Control and Prevention has claimed the lives of more than 535,000 Americans.

Amid this, Greene has appreciated the camaraderie among Methodist Fremont Health staffers.

“Everybody is such a big family that we were able to support each other really well,” Greene said. “Kelly, the physical therapist, is kind of in the same boat as me. She wasn’t used to dealing with all of this. So just being able to have her as a support person was helpful.”

Greene was glad for the progress she saw in patients and knows the sense of peace that can come even amid loss.

“We were definitely able to see progress in some of them and, honestly, for some others they were just so sick and so miserable, sometimes, it was peaceful knowing that they weren’t struggling to breathe anymore, because they had just been so, so sick,” she said.

Some would describe health care professionals as brave.

“I wouldn’t have ever really described myself that way before, but I guess that opened up a whole new chapter of having to learn on the go and being able to step into new situations,” she said.

She has learned much.

“I learned a whole new skill set of how to be compassionate and patient with patients who are some of the most sick that I’ve ever seen in my career,” she said. “They weren’t able to do the typical therapy things that we would work with and so we were really having to think outside the box.”

For instance, a COVID’s patient’s vital signs might look good while therapists were working with them, but then the patient’s oxygen level would drop right afterward.

That meant careful monitoring and taking more breaks. Whereas, Greene might walk a typical patient to a sink to get ready for the day, she might need to have a COVID patient get ready in his chair, because his oxygen need was so high.

Looking back, Greene appreciates the thankfulness and joy she’s seen on patients’ faces as they left.

“The families have always expressed gratitude,” she said.

She is grateful for that and the hope the vaccine brings.

“A lot of us were pretty teary-eyed when we were able to get our vaccine,” she said.

The decrease in the number of positive cases and hospitalizations has been comforting as well.

Greene said she and her husband, Nate, have taken photos of their 2-year-old daughter Brystol in her mask and plan to tell her about the pandemic when she’s older.

They will be able to talk about the events that were canceled and how school went online.

And Greene can tell Brystol about those “goosebump” moments.

Flood waters kept Mary Healy from coming to Fremont in 2019.

Calendar of events for March 24-26

Calendar of events for March 25-27

Many people remember actor Kirk Cameron from the TV comedy, “Growing Pains,” or the movie, “Fireproof.”

Michael Guilliatt of Fremont has qualified for Top of the Table, a coveted milestone achievement for their Million Dollar Round Table (MDRT). …

Hy-Vee, Inc. recently announced that it will host its second “Best of Local Brands” summit in May to expand and enhance the product offerings …

Calendar of events for March 27-29

Find out details about Easter-themed events, a family dinner and more.

A COVID-19 educational event for seniors will take place at 2 p.m. Tuesday, March 30, at the Christensen Field Meeting Room in Fremont.

Calendar of events for March 30-April 1

Find out more details about area events and meetings planned for March 30-April 1.

Tom Ziegler speaks with pain and admiration as his talks about his late wife.

Hy-Vee, Inc. announced Wednesday that the COVID-19 vaccine is now available at all of the company’s more than 270 Hy-Vee Pharmacy locations ac…

Alli Greene is an occupational therapist at Methodist Fremont Health.