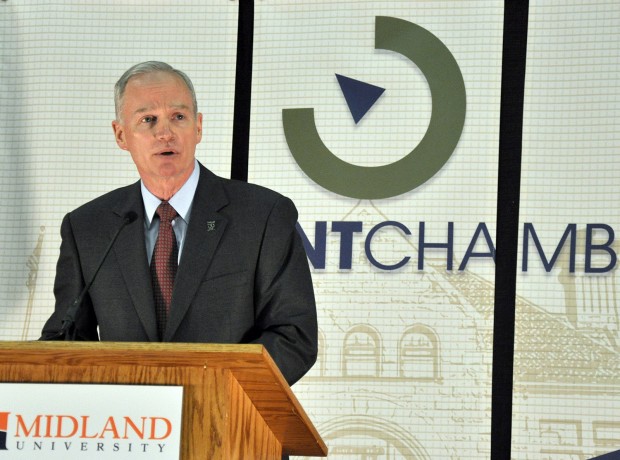 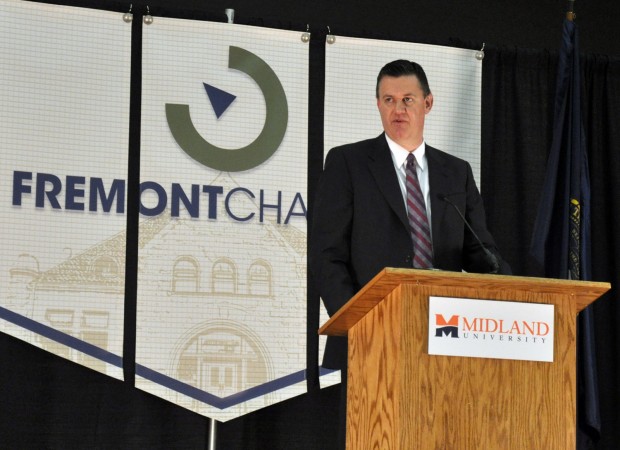 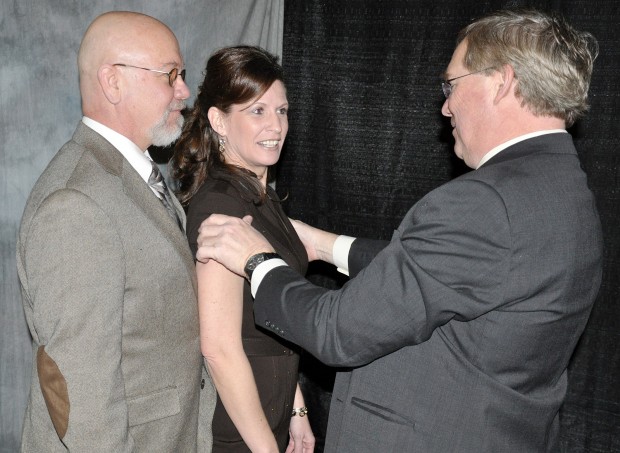 Jim Young knows a thing or two about commitments.

As chairman, president and chief executive officer of Union Pacific, Young leads the largest railroad in North America that is celebrating its 150th anniversary this year.

"You have my commitment that we're going to be good partners with you," Young told those who attended the 132nd Annual Banquet of the Fremont Area Chamber of Commerce. "We're going to work with you for economic growth to make Fremont one of the truly great cities in America."

Part of that commitment is investing $1 billion in Nebraska over the next few years to improve its infrastructure. The work is estimated to create several thousand jobs for the state over the next four or five years, Young said.

Doubling the track between Fremont and Missouri Valley, Iowa, is one of those projects. Bridges will be replaced across the Elkhorn and Missouri rivers, he said.

"America faces a challenge with infrastructure," Young said. "Many of these bridges we're replacing were built 80, 90, 100 years ago. We've bitten the bullet and it's now time to make that investment."

Now is the time to invest, he said, because bids for those capital expenditures are coming in much lower than just four or five years ago.

"Long term, this economy is going to turn around," he said. "Railroads are going to be as important as ever in terms of handling business going forward. Now is the time to invest."

Railroads remain committed to the communities they serve because of their unique nature, Young said.

"We can't pick up and move to China if we're unhappy with the community," he said. "We're part of these communities. In many cases, the city grew up around the railroad."

For Fremont, that history goes back to 1866 when the railroad first arrived in town.

UP plans to be part of the city's future, too.

"When you hear that horn blowing, think about jobs, think about economic growth and think about a global community," Young said. "That's what we represent in the community."

Young was the featured speaker of the banquet, which was presented by Fremont Area Medical Center. But several other dignitaries were in attendance, including Gov. Dave Heineman, U.S. Rep. Jeff Fortenberry, Attorney General Jon Bruning and State Sens. Charlie Janssen and Chris Langemeier.

Those attending also heard Tim Schulz, the 2012 chairman of the Chamber board, outline the organization's goals and Bill Vobejda, the 2011 chairman, present an overview of the community branding project.

A Fremont man was flown by medical helicopter to Omaha after a Saturday night motorcycle accident.

At approximately 10:30 p.m., Oct. 21, James J. Scarpino, 30, of Fremont was arrested on suspicion of assault (domestic) after officers were ca…

At approximately 3:45 p.m., Oct. 21, Jon C. Coniglio, 49, of Fremont was arrested on suspicion of drinking on public property and littering af…

A Fremont man and Papillion woman both pleaded guilty to possession of methamphetamine in the Dodge County District Court Monday.

At approximately 3:15 p.m., Oct. 22, Kevin K. Wedergren, 54, of Fremont was arrested on suspicion of theft after a bicycle was reported stolen…

At approximately noon, Oct. 20, Breanna M. Kelly, 21, of Omaha was arrested on suspicion of possession of a controlled substance (methamphetam…

At approximately 7:10 p.m., Oct. 24, Yoseline V. Servin Castillo, 21, of Omaha was arrested on suspicion of driving while under the influence …

Standing in the terminal of Eppley Airfield with other members of the Fremont community, Vicki Wehrmann-Sorensen waited anxiously for the plan…