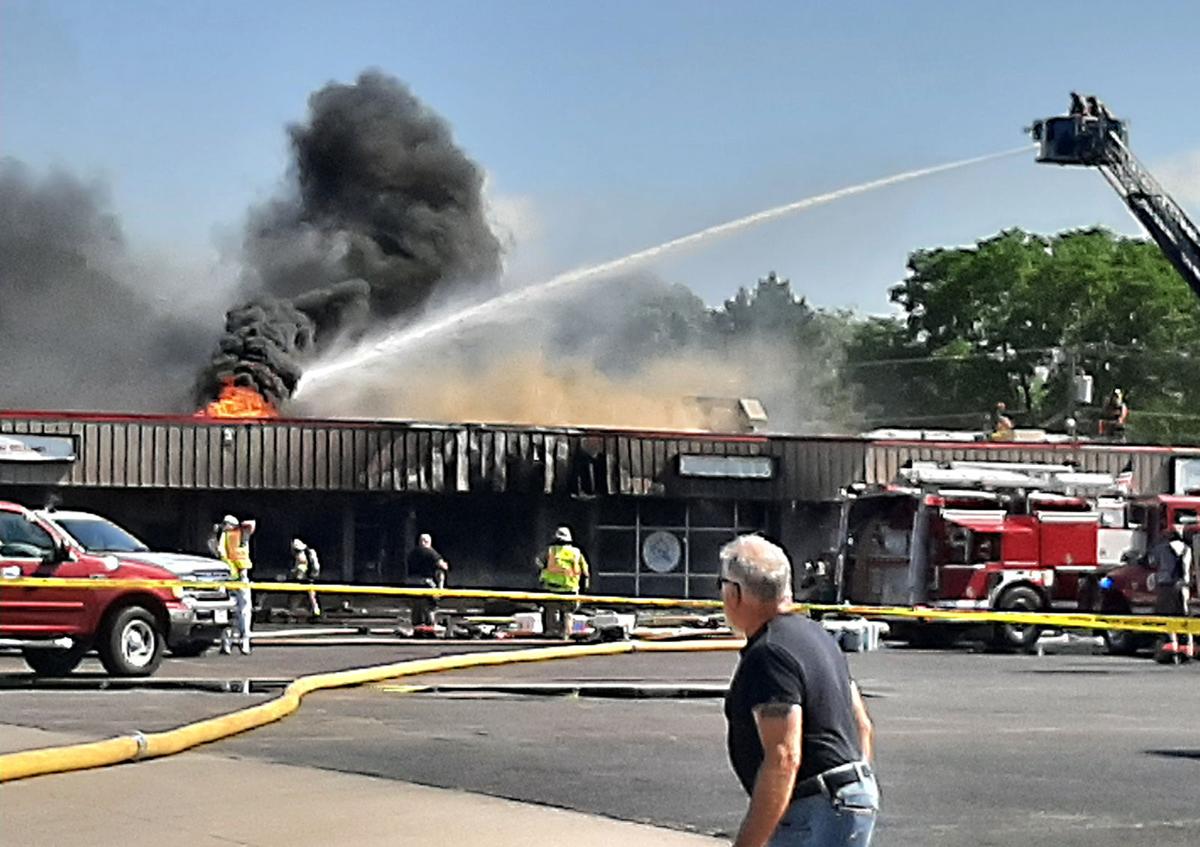 Firefighters work to extinguish a blaze at the Parkview Center, 1900 E. Military Ave., in Fremont in June. Fremont Mayor Joey Spellerberg released the contents of his recommended city budget on Tuesday that included the addition of six new firefighters. 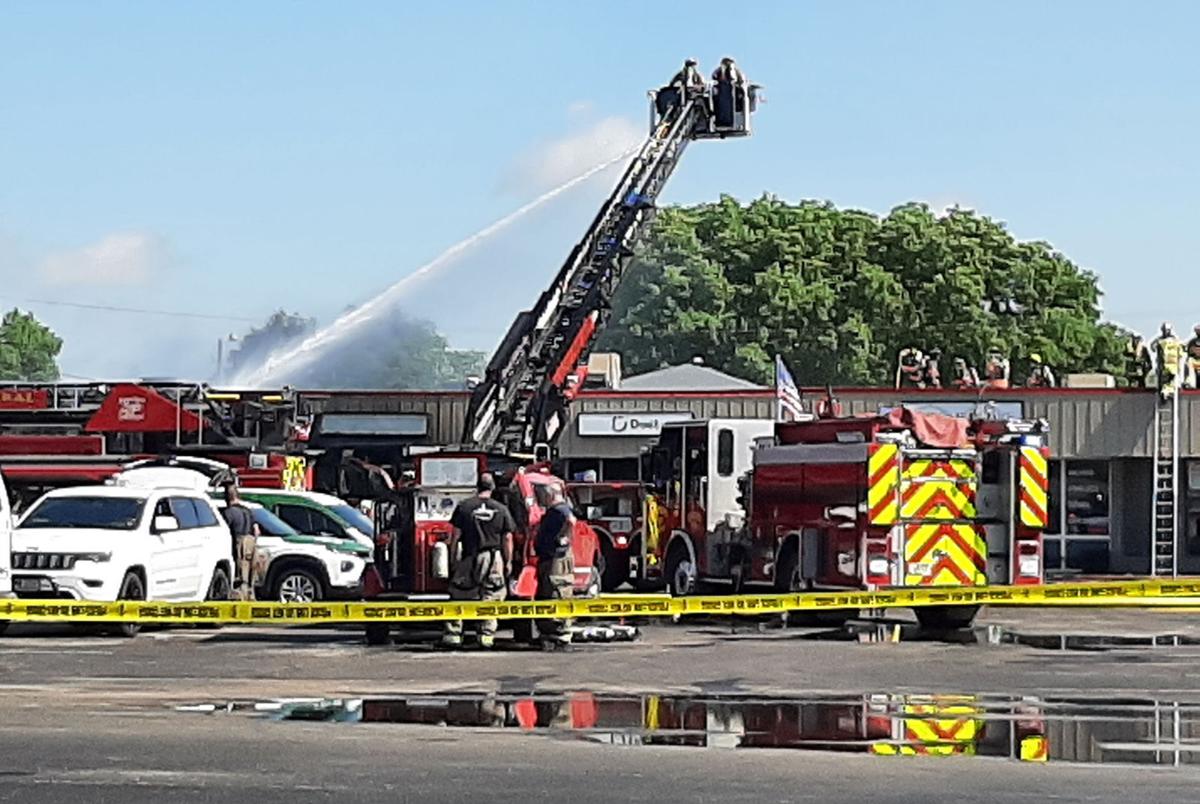 Firefighters extinguish a blaze on Sunday morning at the Parkview Center at 1900 E. Military Ave., in Fremont. 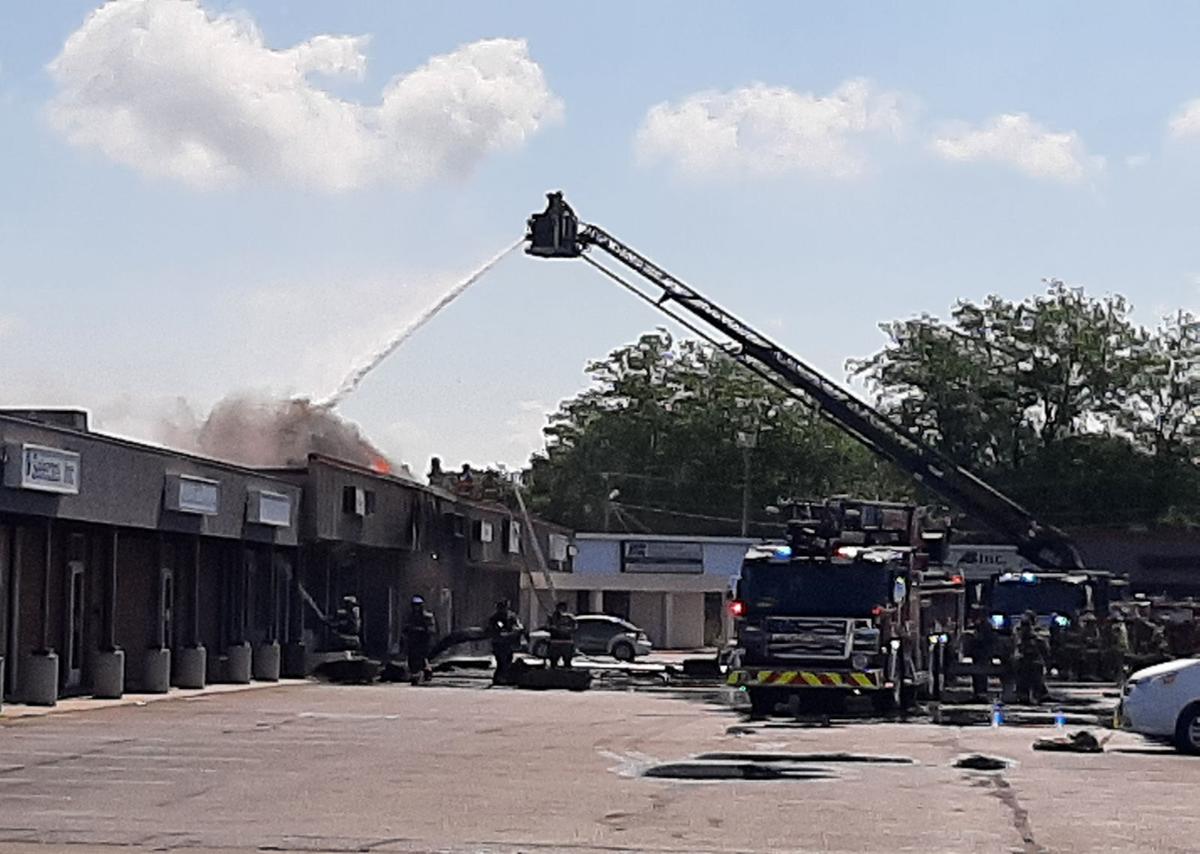 Firefighters battle a blaze at the Parkview Center shopping mall on Father's Day 2021. 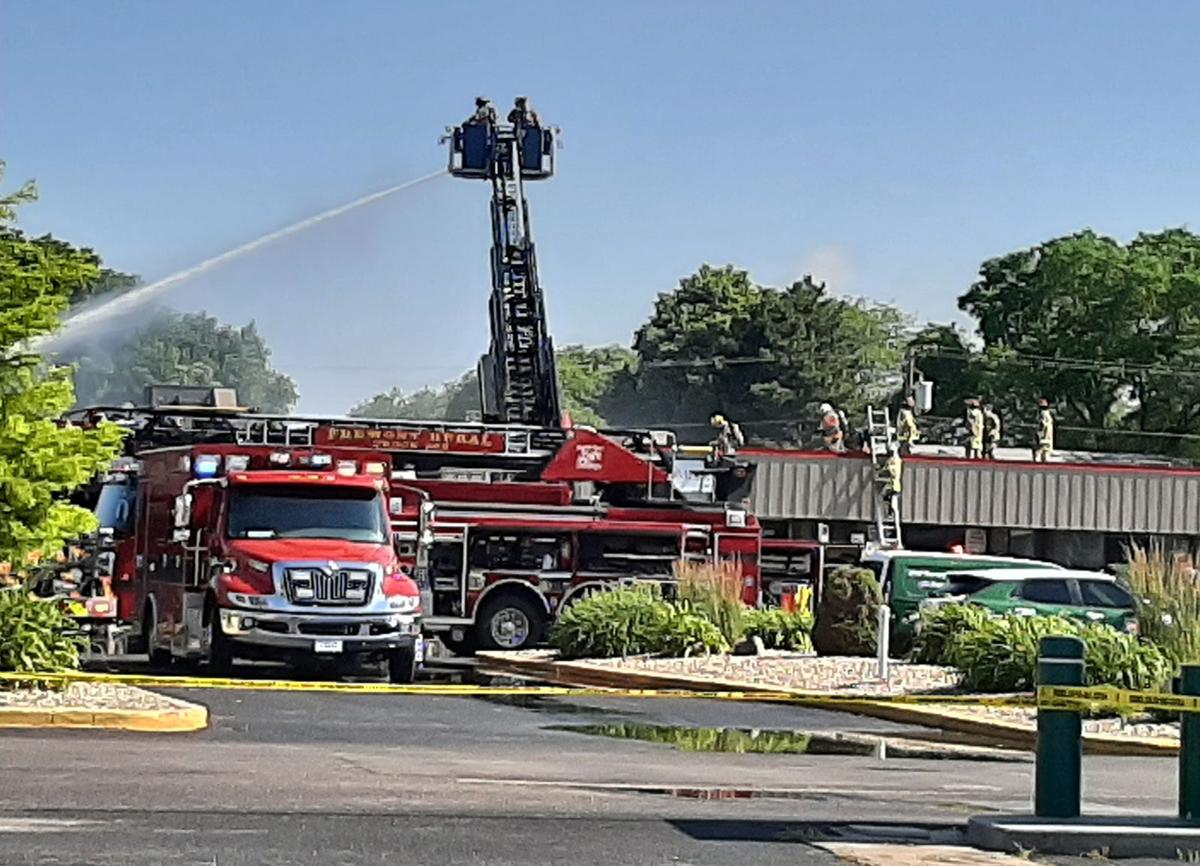 Firefighters are seen in an aerial ladder and on the roof at the Parkview Center during a Sunday morning fire. No one was reported injured.

The State Fire Marshal’s office worked until at least 10 p.m. Sunday striving to determine the cause of a fire that led to damage in several business suites at Parkview Center shopping mall in Fremont.

No injuries were reported and about 40 firefighters were on the scene at 1900 E. Military Ave., working to extinguish the initial blaze and fires that broke out thereafter.

The State Fire Marshal’s office is continuing the investigation and has ruled out arson.

“They’ve made the determination that it wasn’t intentionally set so they believe it’s an accidental fire, but they’re trying to find the true origin,” Christensen said.

Firefighters were called at 8:41 a.m. when the alarm was activated in Suite 216, which houses Little Peas Academy 1 – Preschool Center, where the fire started, Christensen said.

Because Fremont Fire Department personnel already were on a rescue squad beforehand, only two firefighters were able to reach the scene at first.

“When we arrived, it (flames) had already broken through the front windows of that daycare,” Christensen said. “At that time, we did our initial fire attack and that’s when I started calling in the outside agencies to come and help us out.”

“Once I got there, we did an initial knock down (of the fire) and at that time, I could see it had gotten to the attic,” Christensen said.

Fire had reached the overhang on the front of the building.

Christensen said there are fire walls — fire resistant structures designed to restrict the spread of a blaze — in between each of the business suites.

But there were no fire walls in the overhangs so fire traveled in it — in both directions — across the front of the building.

Christensen estimated it took firefighters about an hour to knock down the bulk of the fire. It took another two hours to keep fighting extension fires.

“We were more or less chasing fire in the hidden areas,” he said.

Christensen said fire reached the roof, comprised of steel over which is about 8 inches of insulation with a rubber membrane. Fire burned the insulation. The roof itself posed more of a challenge for firefighters to open so they could stop the fire from spreading.

Heavy fire damage occurred in the daycare suite. A business suite to the east, The Fur Shack, had heavy smoke and water damage, Christensen said.

Christensen listed businesses that had smoke damage. Some also had water damage. They include: two different suites used by office personnel for Duet, formerly known as ENCORE; Promedcare; The Parlor; Glisten and Glow Spa by Linley; a non-occupied suite; Julie’s Creative Movement & Dance Studio; and Selectel.

Some businesses sustained more damage than others.

Christensen also noted that one of the Duet suites along with the dance studio and Selectel are situated in a building that formerly housed a skating rink and is adjacent, but separate from where the fire broke out.

No estimated dollar amount of damages is available at this time.

“It was a good team effort,” Christensen said of firefighters, who rotated between firefighting and taking breaks to drink water.

All three shifts of Fremont Fire Department firefighters were called in to assist along with volunteers from Fremont Rural, Arlington, North Bend, Hooper, Cedar Bluffs and Valley departments.

Arlington and North Bend personnel staffed the station to handle squad calls in the city, while other firefighters fought the blaze.

The Blair Volunteer Fire Department brought firefighting foam to the scene in case it was needed.

Christensen said most crews returned by about 12:30 in the afternoon.

Christensen compared the fire location to that of an archeological site for the investigators.

“Because of the amount of fire and high heat, it pretty much just crumbled roof so it’s almost like an archeological dig,” he said. “They take off the dirt layers — layer by layer — as they’re trying to find and piece the scene back together.”

They do this to determine how the fire started.

During the fire, onlookers filled part of the Dollar General store parking lot across the street from the Parkview Center. Yellow caution tape was strung around the center parking lot.

Sunday morning, which was Father’s Day, hadn’t begun like anybody expected.

Tresa Sewick was at home when she was called and texted about a fire at the building housing The Fur Shack.

“I opened my patio door since I live on East Ninth behind the Parkview Center and our whole backyard was engulfed in smoke and the smell of rubber burning,” Sewick said. “I got up here and the center of the strip mall was in flames. Flames were shooting up.”

Former Mayor Scott Getzschman, a partner in the Parkview Center, watched as firefighters sprayed water on the multi-suite mall.

He expressed thanks for all of the firefighters.

“We were extremely blessed that no one was hurt or occupying the spaces when the fire broke out,” Getzschman said.

Getzschman also thanked the Fremont Department of Utilities, which arrived on the scene to shut off power and gas to the building, and the Fremont Police Department and Dodge County REACT, who kept streets blocked off.

“A tragedy like this affects a tremendous number of lives and livelihoods,” Getzschman said. “They’re affected tremendously.”

Duet, formerly known as ENCOR, had a June 11 Fremont Chamber of Commerce ribbon cutting at its location at 1935 E. Military Ave., across the street from the fire. This location provides services for people with developmental disabilities. Duet had offices in the mall where the fire broke out.

As winds blew from the south to the north on Sunday, Sewick feared the fire might spread from the mall to homes on Eighth and Ninth streets, but firefighters kept the blaze contained.

People walking past Getzschman expressed sympathy about the loss as he watched firefighters continue with their work.

“This is life,” Getzschman said. “You don’t like anything like this to happen, but you have to deal with it.”

Elliot Kriutzfield initially resisted the thought of having a double lung transplant.

In the late 1970s, Gordon and Susan Miller’s children wanted to earn some spending money.

Once a year, Dale and Nancy Hilgenkamp’s grandkids get to look like Smurfs.

Visitors to six state recreation areas will be allowed to touch off fireworks on July 4. The Nebraska Game and Parks Commission is urging them…

Next week, a Logan View High School senior will find out if she has been selected as a national officer for the Family, Career and Community L…

Pathfinder Chorus to sing at May Museum

Various Fremont community partners will host a COVID-19 vaccination clinic and health fair for youth at Christensen Field next week.

No one injured in apartment building fire

No one was injured in a Tuesday night fire at the Nye Apartments, 2439 N. Nye Ave., in Fremont.

A Columbus woman is in critical condition in an Omaha hospital following a car and semi-truck accident Tuesday morning near U.S. Highway 30 an…

No one was injured, but an estimated $400,000 in damages occurred during a late Wednesday morning fire at Palleton of Fremont.

After a hiatus due to COVID, churches are planning Vacation Bible School this summer.

After a year that left many people feeling isolated, Independence Day might take on a new meaning in 2021.

An allergy altered the trajectory of Bob Misfeldt’s career plans.

Firefighters work to extinguish a blaze at the Parkview Center, 1900 E. Military Ave., in Fremont in June. Fremont Mayor Joey Spellerberg released the contents of his recommended city budget on Tuesday that included the addition of six new firefighters.

Firefighters extinguish a blaze on Sunday morning at the Parkview Center at 1900 E. Military Ave., in Fremont.

Firefighters battle a blaze at the Parkview Center shopping mall on Father's Day 2021.

Firefighters are seen in an aerial ladder and on the roof at the Parkview Center during a Sunday morning fire. No one was reported injured.