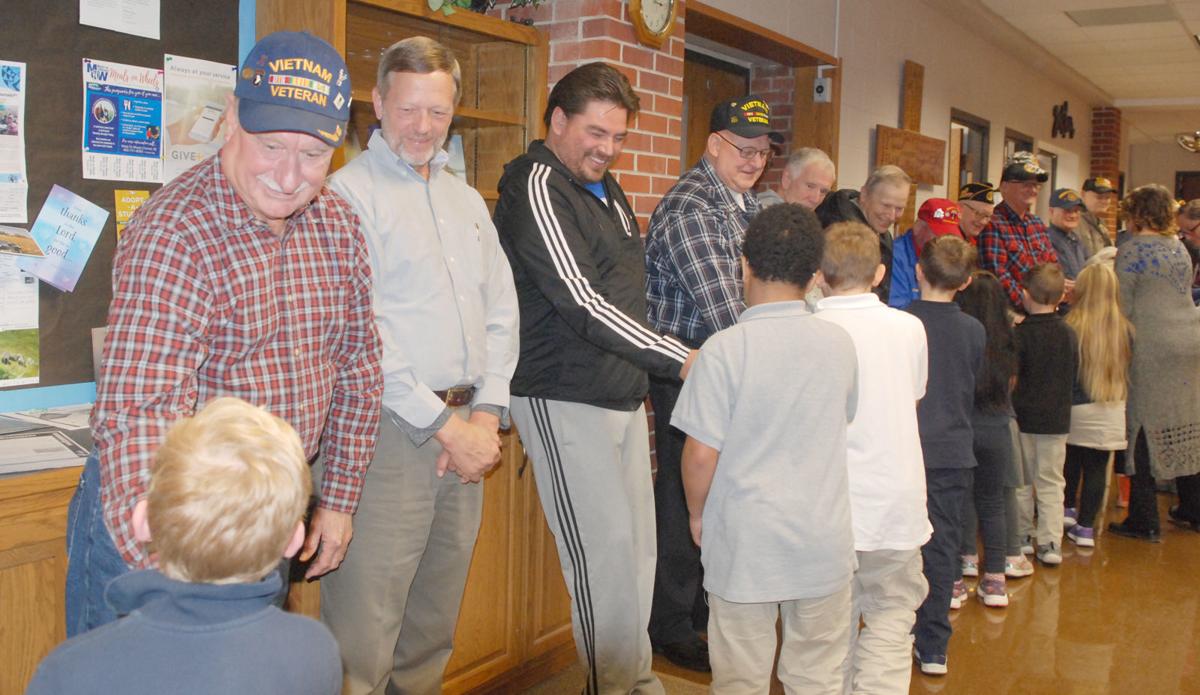 Veterans Robert Fickbohm, Gregg Lund, Jeremiah Taylor and Gary Ruwe are among those standing in a receiving line on Monday afternoon at Trinity Lutheran Church in Fremont. Attendees of the annual Veteran's Day program went through the line to shake hands and say thanks to the veterans for serving their country. 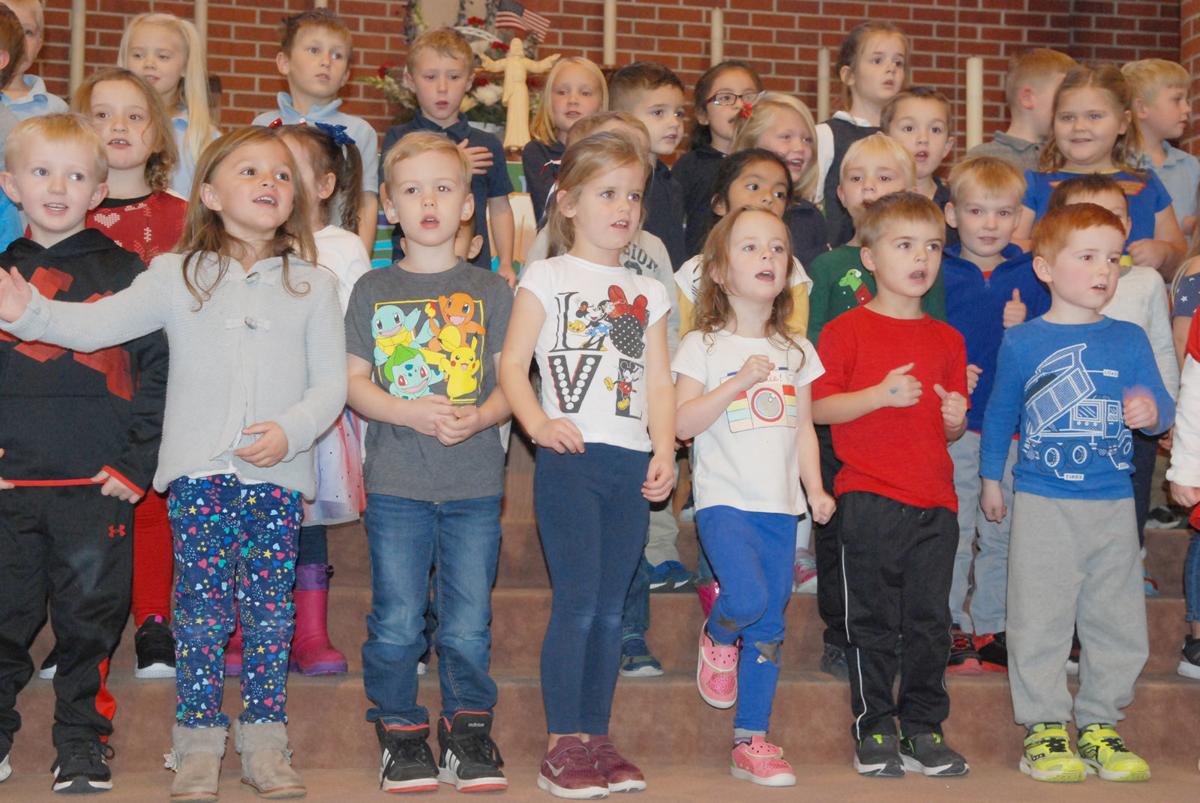 These children were part of a group of pre-kindergarten and kindergarten students who sang, "The Veteran's March" on Monday afternoon during the Veteran's Day program at Trinity Lutheran Church in Fremont. 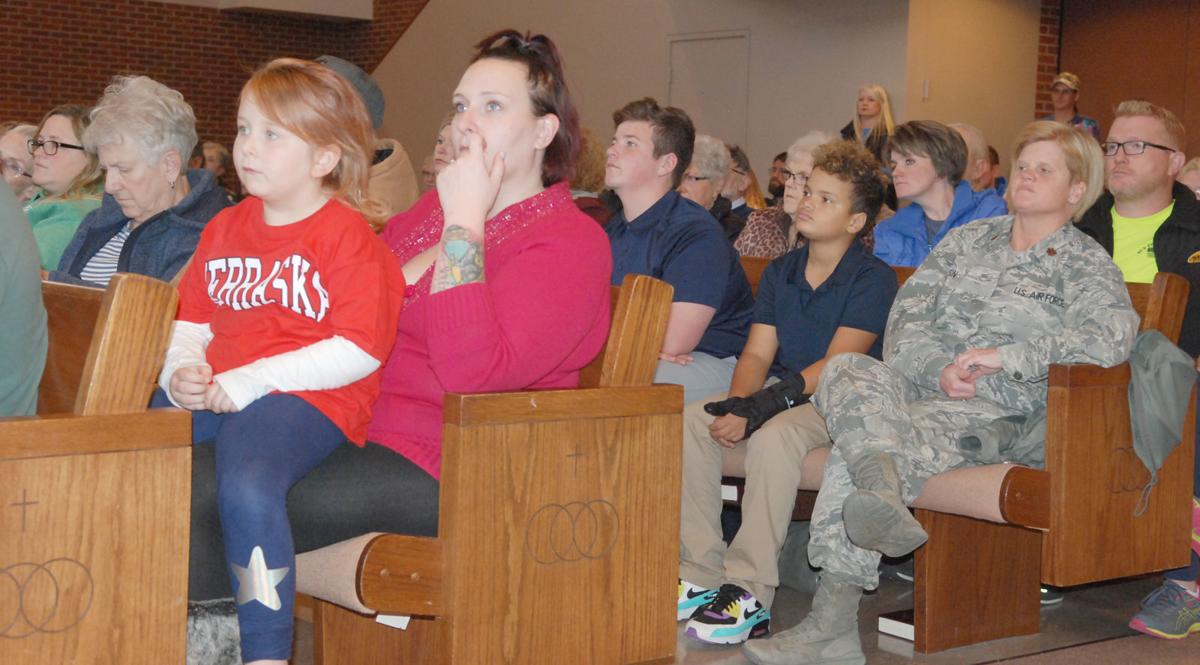 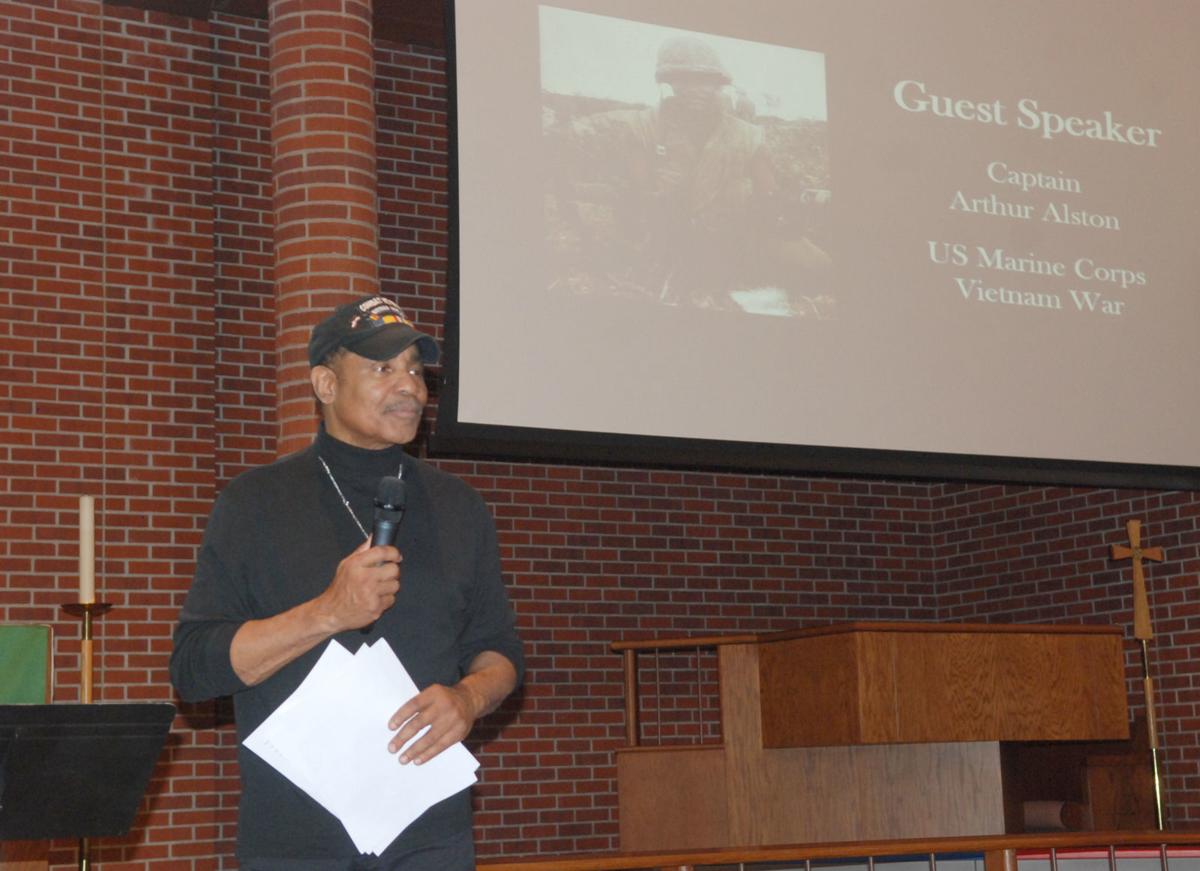 Retired Marine Capt. Arthur Alston speaks during the Veteran's Day program on Monday afternoon at Trinity Lutheran Church. Students from Trinity Lutheran School sang patriotic songs during the event attended by about 300 people, who gave Alston a standing ovation after his talk. 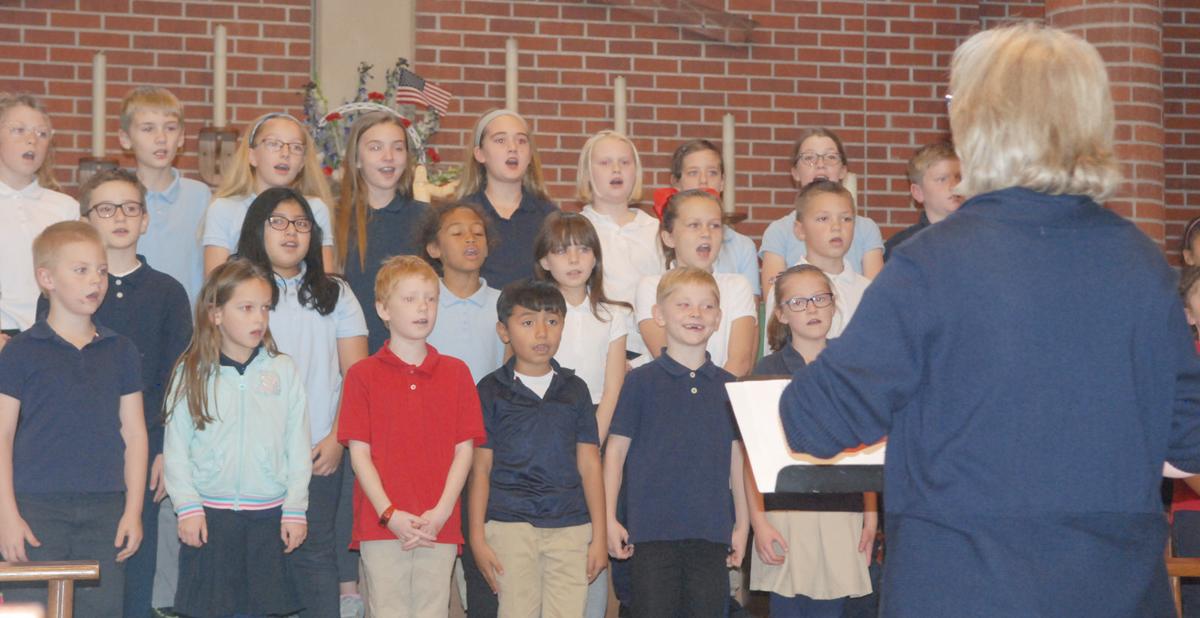 Veterans Robert Fickbohm, Gregg Lund, Jeremiah Taylor and Gary Ruwe are among those standing in a receiving line on Monday afternoon at Trinity Lutheran Church in Fremont. Attendees of the annual Veteran's Day program went through the line to shake hands and say thanks to the veterans for serving their country.

These children were part of a group of pre-kindergarten and kindergarten students who sang, "The Veteran's March" on Monday afternoon during the Veteran's Day program at Trinity Lutheran Church in Fremont.

Retired Marine Capt. Arthur Alston speaks during the Veteran's Day program on Monday afternoon at Trinity Lutheran Church. Students from Trinity Lutheran School sang patriotic songs during the event attended by about 300 people, who gave Alston a standing ovation after his talk.

The Fremont man spoke at the annual event designed to honor those who’ve served their country in the military.

Before the service, Trinity Lutheran School served a ham dinner to 103 veterans and their families, said Greg Rathke, principal.

Veterans, their families, students, teachers and community members then gathered for the service.

Alston told how people commend those who served their country – saying they “paid” the price for freedom.

But Alston believes many are still paying that price.

“We’re paying the price, because there are a lot of people who are still wounded inside and some of them outside,” he said. “My kids are still suffering from Agent Orange that passed through my system. That’s a price.”

That said, Alston looked at the schoolchildren at Trinity.

“But you’re worth it,” he said, adding that they were healing his pain when he saw their smiles and joy.

Alston talked about his struggles with asthma and the faith of his mother, Althea, whom he said taught her eight children to fight for their education, God and country.

His father, Warren, was the first black fire department captain in Omaha.

As a teen, Alston fractured his left leg in Marine boot camp – not once but twice. He later ran 5 miles, loaded down with equipment. A doctor would determine that Alston’s leg was broken.

Alston and other Marines were sent to Danang and later to Khe Sahn in Vietnam.

Incoming artillery fire kept their plane from stopping on the Khe Sahn airstrip and they jumped from the back of the moving aircraft, even as bodies of dead Marines were thrown into it.

Under enemy fire, he took cover in a fox hole.

Then Alston told the group about the hill at Khe Sahn. It was Easter Sunday in 1968. Alston and other Marines were ambushed.

Carrying three rockets, six grenades and seven canteens of water, he hit the ground. He tried to push aside an ammunition box around his waist so he could get even closer to the ground.

A machine gunner was hit and the men were told to pull back. Alston and other men began digging foxholes.

One of the men ran out of fear, but he’d rejoin the others when they were ordered back up the hill.

Alston said the man on his left was shot.

On his right was the man who’d run away earlier. That man pulled up in front of Alston and was hit.

Alston had taken about four or five steps when an explosion knocked him back about 50 feet. He said it felt like the arms of God – in the softest feeling anyone could imagine – had picked him up and pushed him back.

The young Marine rolled on the ground, but wasn’t hurt.

Alston headed back up the hill and saw one of his fellow Marines, who’d been shot. The man smiled at him.

He continued up the hill. Alston shot one enemy soldier who fell into a hole. He tossed a grenade into the hole.

Alston said he tried to hit the grenade thrown by another soldier, but missed and shot the man in the head. The grenade exploded nearby.

Alston’s commander would order a cease fire and he’d find that the side of his face was paralyzed from the grenade explosion. He noticed that his pants were wet.

He was bleeding from shrapnel that had entered his left leg. He used a knife to pull out the shrapnel and poured water on the wound.

Alston would see the photographs of family members that the enemy soldier he’d shot in the head had carried with him. He is still bothered because he didn’t stop other Marines who abused the bodies of dead enemy soldiers. He wishes he’d at least told them to leave alone the two men he’d killed.

He and other Marines later went to Happy Valley, where he ate Purina dog food he’d carried for a scout dog.

“We had no food for two weeks,” he said.

The Marines found some enemy soldiers’ graves. They abused the graves, he said. Alston previously told the Tribune that he was not one of the Marines who did that.

Food and supplies eventually came. Alston’s wounded leg had become so badly swollen that he’d be sent away for treatment. He’d eventually be sent to Cam Rahn Bay and later Japan for medical treatment and then to the United States.

He landed at Travis Air Force Base in California on a stretcher. There, he saw Americans protesting against the war.

He later went to Houston for convalescent leave.

Alston planned to get a haircut, but was denied due to his race.

“I came from Omaha and had never experienced that and I’d come from Vietnam — a wounded Marine — and I couldn’t get my hair cut,” he said.

Alston said when he came home from the war, no one said a word. Not even “thank you.”

“I think they were scared,” he said.

He talked about returning to Nebraska, having flashbacks, marrying and getting divorced, and not being able to get a job – the latter of which he believes was because he faced discrimination due to having been a veteran.

Alston talked about being homeless and taking his four children and $800 to California, where he got a government job. He talked about work he did and moving back to Nebraska.

He told how all his children and grandchildren have psoriasis, which he traces to his being in Vietnam where Agent Orange was used.

“When you hear that all have given, some have given all - some are still giving,” he said.

Years ago, when Alston's son was 6 years old, the boy asked, “Daddy, did we win the war?”

After Alston spoke, the audience arose, giving him a standing ovation.

Veterans filed out of the sanctuary and were asked to stand in a receiving line where other attendees shook their hands and thanked them for their service.

Joslynn Taylor, 7, smiled and hugged her dad, Jeremiah, as he stood in the line.

“I was here last year,” Jeremiah said of the program. “You get this warm feeling, being acknowledged on a decision I made to join the military.”