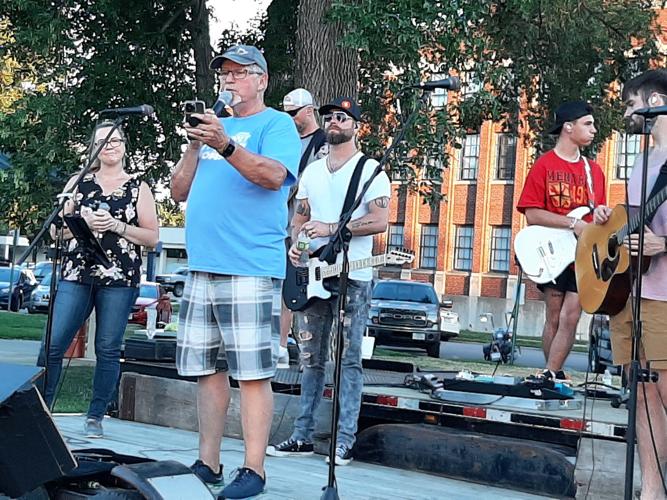 ABOVE: Pastor Robert Wilson of Lifegate Church in Fremont speaks during a worship night in John C. Fremont Park. 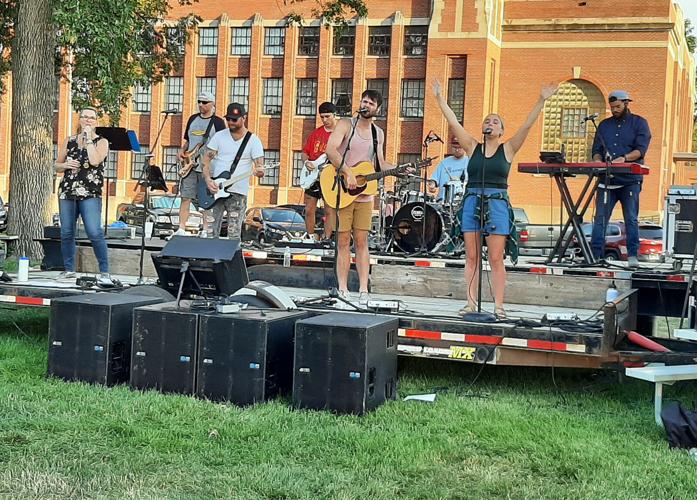 The Rev. Robert Wilson was clearly pleased as he looked around John C. Fremont City Park.

At least 400 people had gathered to worship and more had come earlier that night on July 29 to eat during a Citywide Worship event.

“This far exceeded our expectations with the number of people that have come out and the unity of the churches,” said Wilson, pastor of Lifegate Church in Fremont. “Even several other pastors from other churches showed up to worship with us and our prayer is that we make this an annual event.”

Wilson and the Rev. JJ Hartung, pastor of Full Life Church, worked to host an event designed to promote unity, bringing churches and Christians together.

Now, the pastors plan to get together soon and start planning next year’s event.

“Hopefully more churches and their worship teams come together and participate with us,” Hartung said.

The recent event included games and a bounce house for kids and free hamburgers and hot dogs during the first part of the evening.

“We had a lot of people who came just to eat and we didn’t run out of food,” Wilson said.

Later, a band consisting of musicians from Lifegate, Full Life and Stonebridge churches led worship, which lasted about two hours.

Attendees listened, worshiped and sang along with the music. Some closed their eyes and raised their hands in worship.

The Rev. Mariano Menendez, pastor of Word of Life in Columbus, said he brought six guys and a family to the event.

“We’re here because we know and believe the power of worship,” Menendez said.

“I came because I saw it as an opportunity to worship the one true God with people from Fremont,” Shepard said. “I love seeing all the different people gathered here, people you might not normally see. I think this is a small glimpse of what heaven will be like.”

Ed Volpi of Fremont said he’d felt the presence of God and also talked about why he came.

“I wanted to praise the Lord and watch the Fremont community come out and worship,” Volpi said.

“I thought the Citywide Worship was a huge success,” Hartung said. “I thought it was awesome. For me, to see churches come together to worship Jesus is always a success.”

Hartung believes friendships were built through people collaborating for the event. He believes it brought unity for those on the different worship teams and for the pastors, who’ve met for prayer.

People from churches not involved in the event also attended and Hartung could see friendships start to blossom.

“In a world where there’s so much division, this event shows people that even though we go to different churches, we do worship the same Jesus,” Hartung said.

“We’re hoping this will become an annual event and other churches will partner with us as we move forward in uniting our community,” Wilson said.

During the Friday night event, Menendez shared his thoughts on the power of worship.

“When we touch heaven, then earth changes,” Menendez said “So I know for sure Fremont will never be the same again, because of the unity that happens among the body of Christ and when unity takes place the glory of God is manifested.”

Worship in the Park 3

Worship in the Park 2

People listen to music and worship during a July 29 event at John C. Fremont Park.

Worship in the Park 1

A band consisting of worship leaders from local churches plays music during a worship in the park event in John C. Fremont City Park.

Men of Integrity Breakfast set for Saturday in Fremont

A Men of Integrity Breakfast will begin at 8 a.m. Saturday, Aug. 6, at Lighthouse Ministry Center, 84 W. Sixth St., in Fremont.

New software can make it easier to register for a Fremont Parks and Recreation program or rent a facility.

Zoey Gathman holds a chicken the way most teens hold a cell phone.

Cameron Curtis didn’t expect to win anything when she walked into the show ring with a cow named Callie.

NCHS has welcomed four new board members to its team.

During the month of August, Hy-Vee dietitians will host a series of programs and workshops focused on helping kids and families prepare for th…

WIC and immunization clinic set for Aug. 10 in Blair

See what's happening next week at the Fremont Friendship Center.

Fremont-area calendar of events for Aug. 6-8

Find out about area meetings and events taking place Aug. 6-8.

And that’s what happened with a rabbit named Olaf.

What is the Florida Python Challenge?

ABOVE: Pastor Robert Wilson of Lifegate Church in Fremont speaks during a worship night in John C. Fremont Park.